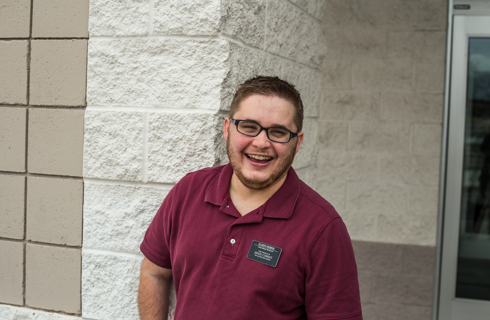 In April 2017, Elder Jeffrey R. Holland taught that everyone has something to contribute in Heavenly Father’s kingdom. He said, “Heavenly Father delights to have us sing in our own voice, not someone else’s. … Why? Because you are unique; you are irreplaceable.” (“Songs Sung and Unsung,” Ensign or Liahona, May 2017, 49). This principle is as true in missionary service as anywhere else—an idea that Josh Henrie and his family are well familiar with.

Shortly after Josh completed his schooling, he explored options for serving a mission. Because of his learning disabilities, Josh and his parents knew a full-time proselyting mission wasn’t the best fit. Instead, they looked at Church-service mission opportunities that might work.

Following the counsel of his stake president, Josh volunteered at a local bishops’ storehouse to give it a try. And that’s all it took. Soon Josh was serving as a young Church-service missionary six hours a day, five days a week, just a couple miles from his home.

And the distance was a blessing. Josh’s learning disabilities mean that he doesn’t drive a car. But since the storehouse was nearby, he was able to get to and from his mission on an electric scooter—something that gave him a huge sense of independence. In all kinds of weather, Josh strapped on his safety equipment and jetted to serve his mission, helping customers and working with fellow Church-service missionaries and volunteers.

When asked how Josh felt about his mission service, he says, “It really increased my testimony of how service works.” He loved it so much that he still volunteers there from time to time even though he’s been released.

But that’s not all the experience did for Josh. Toward the end of his two-year mission, Josh transitioned from the bishops’ storehouse to a position at the local Deseret Industries, right next door. After working faithfully as a missionary, he received a job working as a cashier. These days, you won’t see Josh jetting to his mission, but you still might see him riding his electric scooter to work—a job he got with the help of his mission service.

What advice does Josh have for others like him, trying to figure out where the Lord would have them serve? He says, “A Church-service mission is a good experience. You’ll feel blessed. You’ll feel like you turned over a new leaf. You’ll feel more spiritual.” Just like Elder Holland counseled, Josh Henrie found his unique role in missionary service and filled it faithfully.

If you are 18–25 years old, learn how you can uniquely contribute to the Lord’s work by serving a young Church-service mission. Explore opportunities today.