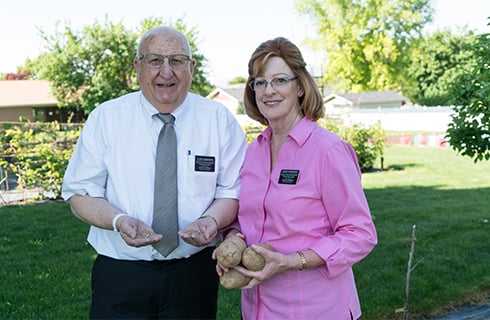 When Elder Philip Rasmussen was nearing retirement, his wife, Linda, suggested that the best transition would be an active one—so they began applying to serve a traditional full-time senior mission. However, one phone call changed their plans.

With a PhD in soil physics and over 35 years as a university professor, Elder Rasmussen is an expert at helping things grow. So when he and Sister Rasmussen received a phone call asking if they would be willing to serve a mission with Farmland Reserve, advising and assisting in crop production around the world, they immediately said yes. It was the perfect way to consecrate their professional expertise and other talents to further the work of the Lord.

As full-time missionaries, the Rasmussens served in England for two months before moving to Washington State. During their full-time service, they also traveled to places like Brazil and the U.S. Midwest to assist with various farms owned by Farmland Reserve.

But their missionary service didn’t end when their full-time mission was done. The Rasmussens have continued their service as Church-service missionaries with Farmland Reserve, consulting and assisting from home. What began as a one-year Church-service assignment is now in its second one-year extension, and they plan to continue to serve.

What blessings have the Rasmussens seen from their combined missionary service? Here are a few they pointed out.

Miracles. “One of the first things I noticed,” recalls Elder Rasmussen, “was all the little miracles that happened every day because we were serving instead of being paid.” Take, for example, the time they were preparing to run some sample tests on the farm in England. As they examined the fields, they looked across the road and saw a local farmer planting with one of the methods they wanted to test. A test that would have taken them three weeks to set up and conduct was accomplished in a much shorter time because the farmer allowed them to observe his field. They saw miracles like this happen all the time.

Joy. Missionary service fills the Rasmussens with joy. Elder Rasmussen explains: “There aren’t words to adequately express the joy you feel inside in serving the Lord. Jobs are great and you get the honors of men. But I’ve never missed the professional career that I had. Granted, I’m doing many of the same things for the Church, but it’s just totally different. Most of it’s just quiet and anonymous and it moves the kingdom forward. And that’s a huge blessing.”

A stronger marriage. The Rasmussens’ missionary service has brought them closer together. They study more seriously together, enjoy spending more time together, and make a conscious effort to hold hands more often. Not only is the hand-holding a great boost for their marriage, but it’s a way for them to testify to others that marriage is good and that they still love each other after many years together.

Setting an example. With five children and sixteen grandchildren, the Rasmussens want to show their family the importance of serving the Lord. As they serve their missions, they are teaching their family members what it means to consecrate their lives to the Lord.

Flexibility. The Rasmussens have found that serving missions doesn’t have to separate them from their family. As full-time and Church-service missionaries, they have always had the flexibility to be connected with loved ones. Sister Rasmussen emphasizes: “I know for a lot of grandmas, leaving the grandkids behind is hard. But with senior couples, the flexibility is so great.”

For the Rasmussens, the transition from career to retirement has been fulfilling as they’ve consecrated their time and talents to the Lord. What had been a successful career has now turned into successful missionary service because the Lord is using their unique talents and abilities to further His work. “There is no longer a standard senior mission,” Sister Rasmussen points out. “More and more, the Church is taking the skills you have developed over a lifetime and finding a way to use them to benefit the Lord.”

If you are interested in learning how you can consecrate your specific skills and talents as a Church-service missionary, explore opportunities today.