The Balance of Justice and Mercy 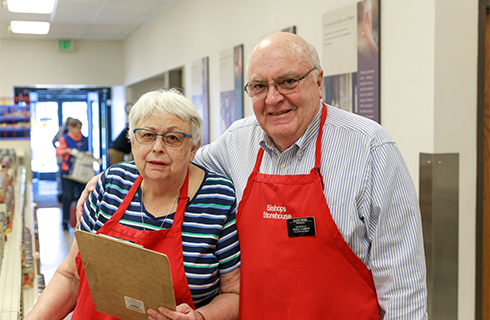 Not long after Elder Sam and Sister Mary Moss moved from Iowa to Kuna, Idaho, a member of the high council in the Kuna East Stake mentioned a need for Church-service missionaries at the Boise Idaho Bishops’ Storehouse. The Mosses, who had recently completed a full-time mission in Colorado, were uncertain but intrigued. Sister Moss recalls, “We knew nothing! We didn’t know where it was. We knew nothing about it. But we filled out the paperwork.”

What followed was three years of what Elder Moss describes as “the most satisfying Church-service job I’ve ever had.” At first the Mosses served two days a week for a few hours each day. But after the first year, they worked many more hours each week, first as assistant managers and then managers of the facility. Through their service, the Mosses witnessed firsthand the balance between justice and mercy in the lives of individuals.

On the one hand, they understood justice. They were responsible for keeping things running. They kept supplies stocked, coordinated with local leaders to have enough Church-service missionaries in place, and worked with volunteers. Most importantly, they made sure the storehouse ran according to the Lord’s design. When people came for assistance, the Mosses and other missionaries filled the food orders as specified by local bishops without variation. 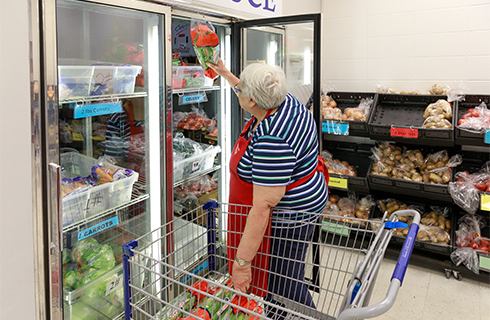 But they also showed mercy. Even as they operated within the guidelines, the Mosses learned about the Savior’s mercy as they interacted with people one by one. A sign hanging in the room where they bagged produce read, “Do as the Savior would do. Give a little more rather than less.” That’s what they always tried to do—be generous with what they could give. And the stories they share about their service speak volumes about their love for the people.

Take, for example, the time a mother came with her small children to fill a food order. “They were obviously hungry,” Sister Moss recalls. “So we went to the back room and made them sandwiches to eat right then.” The children devoured the food, and the mother offered hers to the children as well. That prompted the missionaries to go make more so the mother could eat too.

Or the time a woman wandered the aisles in obvious distress. A young Church-service missionary who was sensitive to the Spirit approached Elder Moss and asked if the woman could have a priesthood blessing. After visiting with the woman and learning a little of her struggles, Elder Moss gave her a blessing of comfort and direction. Through that small act, he offered her mercy in addition to filling her order.

The Mosses were able to help a few volunteers prepare to enter the temple, return to Church activity, or just find a place to serve and belong. They gave encouragement to individuals who were temporarily struggling to make ends meet. Sister Moss and other sister missionaries even made winter hats during the slow times to give to those who came to the storehouse.

When thinking about the individuals they served, Elder Moss shares, “Those are the ones that make you feel like you’ve really done something. You’ve cheered someone’s life and relieved the pain and suffering.” 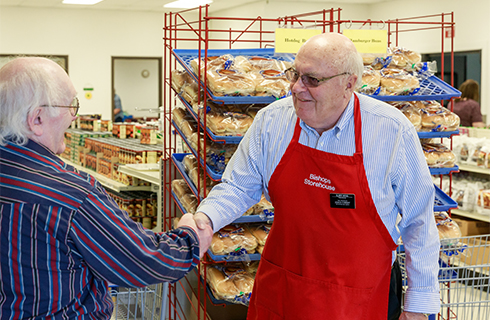 The Mosses cherish their time as Church-service missionaries at the bishops’ storehouse. As they served as the Savior directed, they learned how justice and mercy can work hand in hand to bless the lives of God’s children.

If you are interested in learning how you can serve as a Church-service missionary at a bishops’ storehouse or elsewhere, explore opportunities today.