What do you think it would be like to witness the resurrected Savior? For hundreds of people in Jesus’s time, they didn’t have to imagine it﻿—they lived it. The scriptures tell of at least a dozen recorded instances in the New Testament and several others in the Book of Mormon when the resurrected Lord appeared to the people. These individuals witnessed one of the greatest miracles in history: Jesus Christ overcoming death and making it possible for each of us to live again. Pretty incredible, right?

So what does it exactly mean to be a witness of Christ? Let’s check out a few of these moments in the scriptures and think how we, even without physically seeing Him, can also be witnesses of Christ.

Mary Magdalene was the first witness. The Sunday morning after the Crucifixion, she came to the sepulchre with a few other women to anoint the Lord’s body. When Mary discovered an empty tomb, she wept. Someone approached her from behind. She turned, and the person asked, “Woman, why weepest thou?” Imagine her surprise when she discovered that it was Jesus, risen from the dead. (See John 20:1–18.)

Cleopas and another disciple were walking on the road to Emmaus when they were joined by a stranger. They didn’t recognize their new companion, but during their evening meal together, the stranger broke bread. Then their eyes were opened, and they realized that they had been traveling with the Savior all along. “Did not our heart burn within us … ?” they asked each other, pondering the confirmation that they felt that He had truly been with them. (See Luke 24:13–34.) 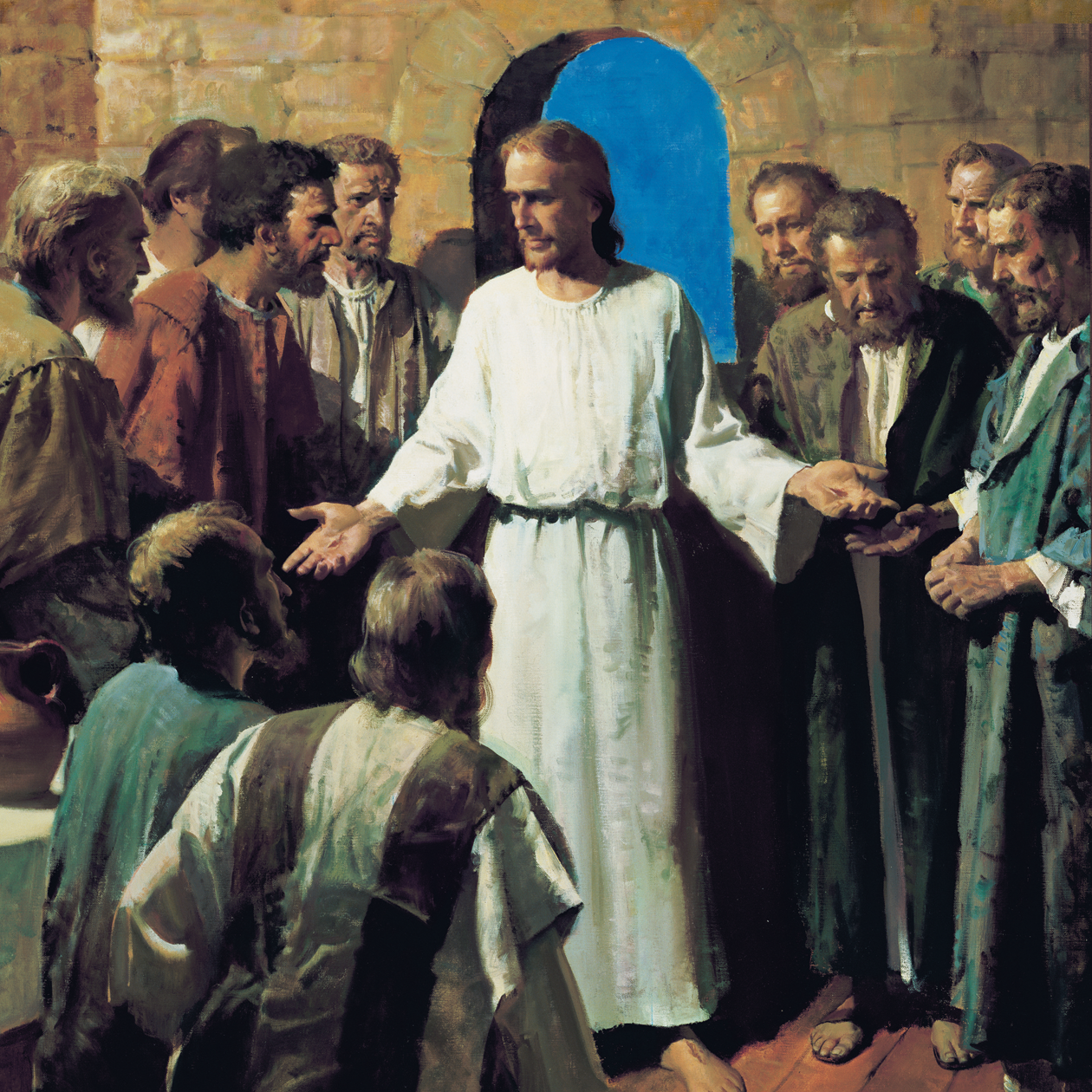 The two disciples who had traveled to Emmaus with Christ returned to Jerusalem and told ten of the Apostles about their experience. While they were speaking, the Savior Himself appeared to them, saying, “Behold my hands and my feet, that it is I myself: handle me, and see; for a spirit hath not flesh and bones, as ye see me have.” (See Luke 24:36–41, 44–49.)

The Apostle Thomas wasn’t present when the Savior first appeared to the other Apostles, so he didn’t believe that Christ had been resurrected. One week later, Christ again appeared to the Apostles. This time Thomas was there, and because he saw Christ, he believed that He had risen. The Savior cautioned Thomas against believing only after seeing: “Because thou hast seen me, thou hast believed: blessed are they that have not seen, and yet have believed.” (See John 20:24–29.)

One day not long after the Resurrection, several of the Apostles went fishing in the Sea of Tiberias but didn’t have much luck. The next morning, the Savior appeared and advised them to cast the net on the right side of the boat. When they did, the net caught so many fish that they could hardly pull it in! After feasting together, the Savior taught about the importance of ministering to others, saying, “Feed my sheep.” The Apostles would spend the rest of their lives doing just that﻿—teaching the people about Christ﻿—and in some cases, they even gave up their lives for the cause. (See John 21:1–22.)

During the Crucifixion, land in the Americas was ravaged by earthquakes, fires, other natural disasters, and three days of darkness to mark the Savior’s death. Later, Christ descended from heaven and visited a multitude of 2,500 gathered near the temple at Bountiful. He invited the people to feel the wound marks in His hands and feet and side, offered a sermon, and blessed the children of the Nephites one by one. Even more people gathered the next day, and the Savior visited and taught them. The disciples eventually formed the Church of Christ, and the Nephites received such a powerful witness that they and the Lamanites too became converted unto the Lord. (See 3 Nephi 11–18; see also 3 Nephi 8–10; 4 Nephi 1.)

We may not have the opportunity to see the Savior as these witnesses did, but you can still be a witness of Christ. You can personally seek the Savior, like Mary did when she went to the tomb, by learning more about Him. Or you might exercise your faith in Him by keeping the commandments and following the counsel of the prophets. Or you could recognize the Savior’s blessings in your life, as the two disciples walking to Emmaus did. This Easter season, think about what it means to be a witness of Christ. These people were literal witnesses who actually saw the resurrected Christ﻿—but that’s not the only way you can witness Him in your life.

“As you feel the Holy Spirit’s testimony of [Christ], confirmed and reconfirmed to your spirit in many different experiences and settings, as you strive to hold up the light of His example in your own life day by day, and as you bear testimony to others and help them learn of and follow Him, you are a witness of Jesus Christ.”

Elder D. Todd Christofferson of the Quorum of the Twelve Apostles, “Becoming a Witness of Christ,” Ensign, Mar. 2008, 63.