What Some Newlyweds Have Learned from Recent Temple Adjustments

Hannah Bennington and Luke Little exit the Bountiful Utah Temple after being sealed on Saturday, March 21, 2020. Photo by Camilla Aubrey.

“Be open to changes. I’ve had to learn how to adjust and not overreact. You have to let God take things His way, because His way is better.” —Joshua Eakle

First, because of community health restrictions regarding the coronavirus, the couple canceled their reception. Then with temples worldwide closing daily, Bennington and her fiancé, Luke Little, opted to move their Bountiful Utah Temple sealing appointment from April 3 to March 21, giving her family one week to arrange travel from Ohio to Utah.

Despite some adversity, everything worked out. With only a small gathering inside and outside the temple last Saturday afternoon, the couple practically had the Bountiful temple all to themselves. Bennington described the experience as “small,” “simple,” and “perfect.”

And just in time.

The following day The Church of Jesus Christ of Latter-day Saints announced that the Bountiful temple was closed, which surprised the newlyweds.

“We had no idea, but everyone kept saying how lucky we were,” Bennington said. “We definitely feel so blessed to be sealed. We know that is most important.”

Before the Church limited sealing ceremonies to 10 people, including the bride and groom, the couple originally reserved a sealing room for 28 people. She had at times daydreamed of a large, fancy wedding, but by Saturday, the couple was thankful just to have both sets of parents and a few other family members.

“We feel so blessed to have been able to be sealed,” Little said. “Honestly, we feel happy with the day that we had.”

His parents, Darwin and Tami Little, can relate to a small wedding. They were sealed 19 years ago in the Nauvoo Illinois Temple with only her parents in attendance. Their wedding reception also happened to fall on a historic day—September 11, 2001. Their experience helped them to relate to the couple’s situation.

“All we told them was it didn’t matter about the party and all that stuff,” Tami Little said. “The biggest thing is that you get married.”

The bride’s parents, Paul and Valerie Bennington, had a similar experience with only few family members attending their Washington D.C. Temple wedding. Both sets of parents were impressed with how well the couple adapted and maintained a positive attitude.

“They knew they were doing the most important part of the wedding,” Valerie Bennington said.

Getting to Utah was an ordeal for the Benningtons. As a nurse manager, it was difficult for Valerie to get away from work. Then her flight was canceled and rebooked four times because of last week’s earthquake. She eventually landed in Utah. Paul drove from Ohio and was slowed down by a blizzard in Colorado. The sacrifice and effort was worth it to feel unequaled peace inside the temple with their daughter and new son-in-law.

“I thought it was special that it was just our family,” Valerie Bennington said. “There wasn’t the hustle and bustle that the temple normally has. It was extra peaceful, and they catered to us. All the workers were so happy and attentive. It was more intimate and a very special day.”

“Even if we hadn’t been there, it would have been OK because she was able to be married in the temple,” Paul Bennington added. 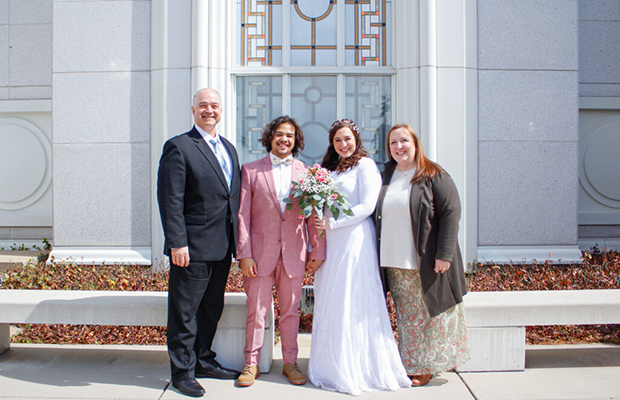 Hannah Bennington and Luke LIttle with the bride’s parents, Paul and Valerie Bennington, outside the Bountiful Utah Temple on Saturday, March 21, 2020. Photo by Camilla Aubrey.

Grandparents on both sides didn’t attend, for health reasons, which was disappointing, but those present still felt their love and support, Paul Bennington said.

“I feel like there was such an outpouring from family for Hannah and Luke that even in their absence, we really felt that the whole family was there,” he said.

Meanwhile, less than an hour’s drive to the north, another couple was preparing for their temple wedding in the Brigham City Temple.

Like Bennington and Little, Joshua Eakle and Kassidy Mote had to eliminate all but the temple sealing ceremony. The situation was disheartening at first, Mote said.

“It was hard taking it in all at once. A wedding is something you plan your whole life. As a little girl, you dream about it because it’s the day you get to be a princess,” said Mote, who served as a volunteer in the Brigham City Temple. “But it has helped me to focus on what’s really important.”

The night before their temple wedding, even shortly after the appointment was confirmed, the Church announced it was temporarily closing all temples. The couple was devastated but still grateful they were able to be married March 26 in a civil ceremony. They plan to be sealed as soon as temples are reopened.

“The goal is to get to the temple as fast as we can,” Eakle said. “I want to be sealed to her for time and all eternity. That’s all that matters to me.”

One highlight of the civil ceremony was that more people could attend via video technology. Everyone they originally wanted to invite was able to watch, including Mote’s 86-year-old grandfather, which was positive, Mote said.

“Now when we get sealed in the temple, we should be able to have everyone there too,” said Eakle, who previously volunteered in the Brigham City Temple laundry room for a year and a half.

Why did things work out this way? There’s no clear answer now, but the couple believes understanding will come in time.

“You never really know why things work out the way they work out or what God has in store for you. Sometimes you just have to go with it,” Eakle said. “There’s a joke out there that if you want to make God laugh, you tell Him your plans.”

What they’ve learned from this experience will bless their marriage.

“Be open to changes,” Mote said. “I’ve had to learn how to adjust and not overreact. You have to let God take things His way, because His way is better.” 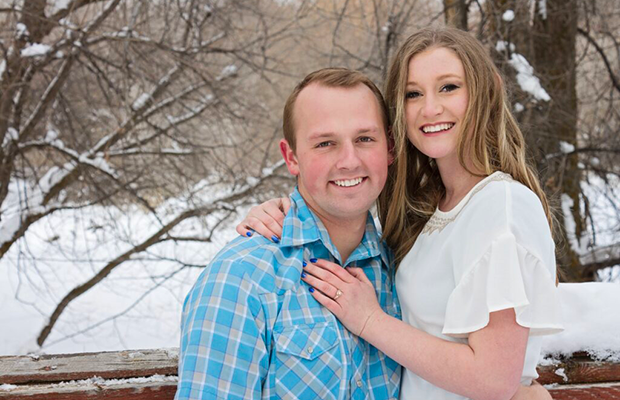 The night before Joshua and Kassidy Mote were set to be married in the Brigham City Temple, the Church temporarily closed all temples to help prevent the spread of COVID-19. The couple was married in a civil ceremony and plans to be sealed when the temples are reopened. Photo by Ashley Munns.