Time Is Running Out; Do the Necessary Spiritual Work, President Nelson Says 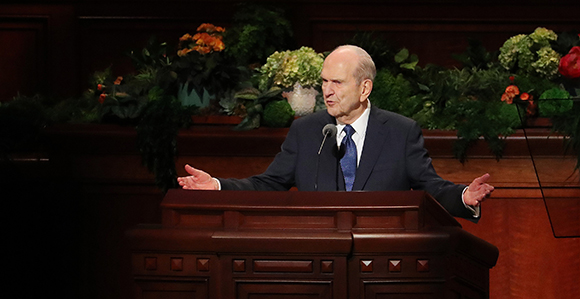 President Russell M. Nelson speaks during the 189th Annual General Conference of The Church of Jesus Christ of Latter-day Saints in the Conference Center in Salt Lake City on Sunday, April 7, 2019. He asked members to come unto Christ and follow Christ’s example.

“I plead with you who have distanced yourselves from the Church and with you who have not yet really sought to know that the Savior’s Church has been restored. Do the spiritual work to find out for yourselves, and please do it now. Time is running out.” —President Russell M. Nelson

Representative of his lightning-paced ministry as President of The Church of Jesus Christ of Latter-day Saints, President Russell M. Nelson pleaded with a worldwide congregation on Sunday to engage in the work.

“As President of His Church, I plead with you who have distanced yourselves from the Church and with you who have not yet really sought to know that the Savior’s Church has been restored. Do the spiritual work to find out for yourselves, and please do it now. Time is running out,” he said.

Speaking during the Sunday morning session of the 189th Annual General Conference on April 7, President Nelson said, “Jesus Christ invites us to take the covenant path back home to our Heavenly Parents and be with those we love.

The talk emphasized a theme common in President Nelson’s 15 months as the President of the Church. President Nelson also spoke of faith in his concluding address of the general conference Sunday afternoon.

“We hope and pray that each member’s home will become a true sanctuary of faith, where the Spirit of the Lord may dwell,” he said in his closing remarks. “Despite contention all around us, one’s home can become a heavenly place, where study, prayer, and faith can be merged with love. We can truly become disciples of the Lord, standing up and speaking up for Him wherever we are.”

President Nelson broadcast his first address as prophet from the Salt Lake Temple annex. The new First Presidency wants “to begin with the end in mind,” he said. 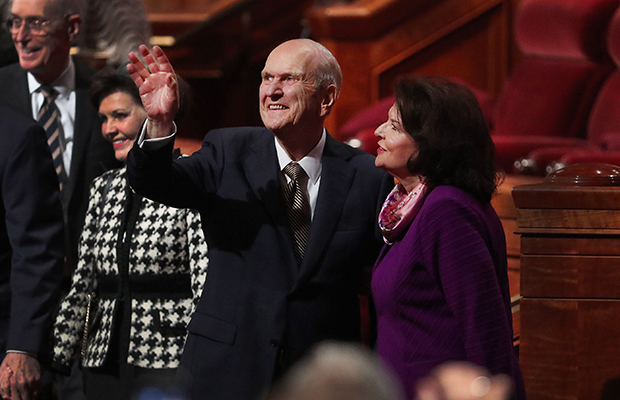 President Russell M. Nelson and his wife, Sister Wendy Nelson, wave to attendees at the close of the 189th Annual General Conference of The Church of Jesus Christ of Latter-day Saints in Salt Lake City on Sunday, April 7, 2019. Photo by Jeffrey D. Allred, Deseret News.

Since being sustained as President of the Church on January 14, 2018, President Nelson has traveled 62,000 flight miles to five continents, 17 nations and territories, and 27 cities, speaking in Seattle's Safeco Field, San Antonio’s Alamodome, and Phoenix’s State Farm Stadium. Following his world ministry tour, President Nelson visited South America and dedicated a temple in Rome, Italy—where he also met with Pope Francis in the Papal City.

Under inspiration and with the sustaining vote of the Council of the First Presidency and Quorum of the Twelve Apostles, President Nelson has changed the way Latter-day Saints worship on Sunday, the organization of priesthood quorums, the way members minister to one another, and regulations regarding missionary service. Members have also been asked to embrace “home-centered, Church-supported” gospel instruction and to use the proper and full name of The Church of Jesus Christ of Latter-day Saints.

Members—sharing on social media President Nelson’s statements during his South American tour in October to “Eat your vitamin pills. Get your rest.”—speculated on what changes may be announced during the general conference. 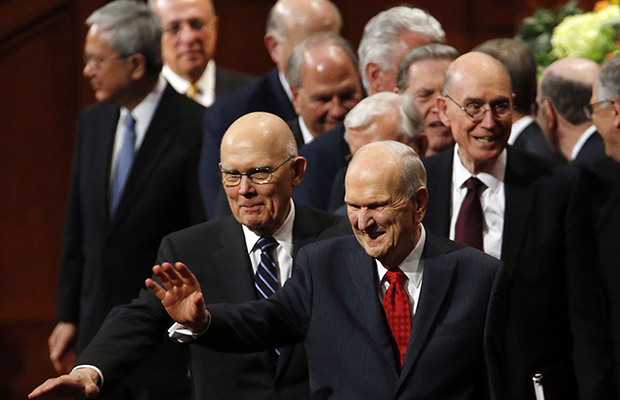 Yet President Nelson’s remarks to the Church’s 16.3 million members focused on individual—not institutional—changes. He urged young men and men gathered for the priesthood session to change and repent (“all of us can do better and be better”) and pleaded with Church members to “Come, follow [the Savior].”

“I understand why God weeps (John 11:35),” he said. “I also weep for such friends and relatives. They are wonderful men and women, devoted to their family and civic responsibilities. They give generously of their time, energy, and resources. And the world is better for their efforts. But they have chosen not to make covenants with God. They have not received the ordinances that will exalt them with their families and bind them together forever.” 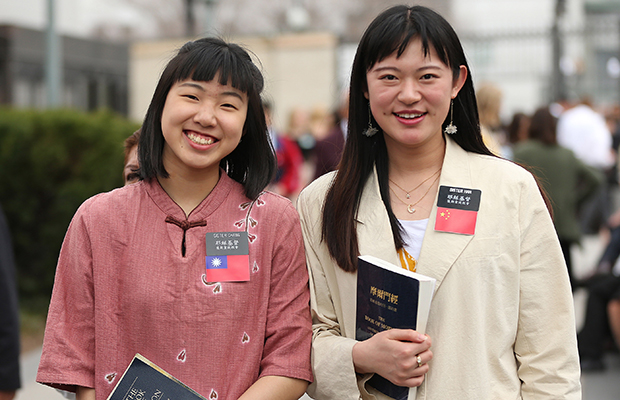 And in leadership sessions of general conference—shared for the first time with the public—President Nelson said Church members need “to become stronger in a spiritually darkened world.”

“Our members are standing like a rock in a moving river,” he said.

During his Sunday morning address, President Nelson spoke of “a tender separation” experienced three months ago when his daughter Wendy died of cancer.

“It was a tender, tearful moment for us,” said President Nelson. “During her 67 years, we worked together, sang together, and often skied together. But that evening, we talked of things that matter most, such as covenants, ordinances, obedience, faith, family, fidelity, love, and eternal life.” 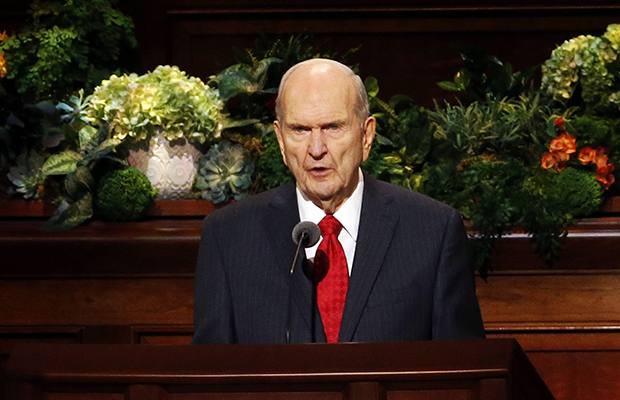 President Nelson said that while in Paradise he and his wife, Wendy, “spoke at length with a young police officer, John, who was one of many brave first responders. He recalled the thick darkness that descended upon Paradise on November 8, 2018, as flames and embers raced through the town, devouring property and possessions like a scourge and leaving nothing but piles of ash and stark brick chimneys.”

For 15 hours, John drove through an impenetrable darkness helping others, with one question on his mind: “Where is my family?”

President Nelson said the account of John’s concern for his family has prompted him to speak to those who may ask when approaching the end of their mortal life, “Where is my family?”

“In truth, the Savior Himself has made it abundantly clear that while His Resurrection assures that every person who ever lived will indeed be resurrected and live forever (Alma 11:41–45), much more is required if we want to have the high privilege of exaltation. Salvation is an individual matter, but exaltation is a family matter.” 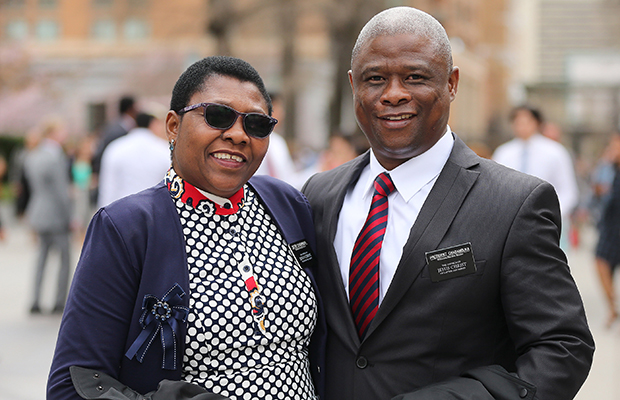 President Dallin H. Oaks, First Counselor in the First Presidency, told the worldwide membership that they must repent before the final judgment to assure that they will be clean before God.

“My message today is one of hope for all of us, including those who have lost their membership in the Church by excommunication or name removal,” he said. “We are all sinners who can be cleansed by repentance.”

Repentance brings about the Lord's assurance that one's sins are cleansed and forgotten, President Oaks said. “Our loving Savior opens His arms to receive all men and women on the loving conditions He has prescribed to enjoy the greatest blessings God has for His children.”

President Henry B. Eyring, Second Counselor in the First Presidency, said during the Saturday morning session of general conference that even good people eventually face a spiritual decline if they don’t protect the things that make a strong family.

“Building faith in Jesus Christ is the beginning of reversing spiritual decline in your family and in your home. That faith is more likely to bring repentance than your preaching against each symptom of spiritual decline.”

Five principles—growing in faith, praying with love, teaching early repentance, cultivating the missionary spirit, and visiting the temple—help families feel and keep the Spirit in their homes.