President Nelson Shares 5 “Lessons Life Has Taught Me” with 49,000 in Safeco Field 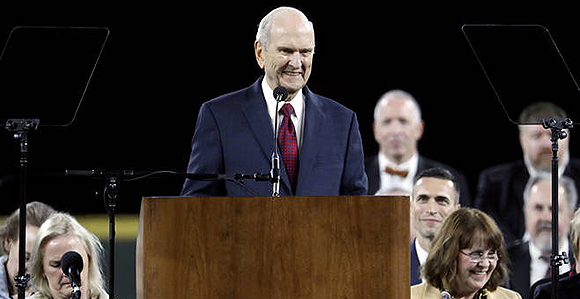 “I plead with you not to let the temptations of the world … distract you from the real reason you are here on earth. Will you use your agency to choose Jesus Christ and His gospel?” —President Russell M. Nelson

Standing on second base in Seattle’s Safeco Field, President Russell M. Nelson shared the “lessons life has taught me” during a devotional with 49,000 Church members—the largest non-sporting event ever held in the iconic baseball stadium.

“My dear brothers and sisters, we are living in the most crucial era in the history of the world,” he said on Saturday evening, September 15. “Since the beginning of time, prophets have foreseen our day and prophesied about what would take place during this winding-up period before the Savior comes again.”

Accompanied by his wife, Sister Wendy Nelson, and President Henry B. Eyring, Second Counselor in the First Presidency, President Nelson expressed gratitude for the opportunity to return to the Pacific Northwest, where in 1985 he was made an honorary member of the Seattle Surgical Society.

Latter-day Saints began lining up for the devotional midday—arriving at Safeco Field, home of the Seattle Mariners, up to six hours before the 6 p.m. start. Some 2,200 local youth—Laurels and priests age 16 to 18—filled the seats directly in front of President Nelson during the historic meeting.

The Church of Jesus Christ of Latter-day Saints is well-established in the Pacific Northwest; the Church’s first unit in Washington was organized in Tacoma in 1899 with 21 members. By 1940 membership in the state had reached 5,000.

Today Washington has 288,000 Latter-day Saints, three temples, and eight missions, according to the Church’s Public Affairs Department. Church members account for 3 percent of the state’s population, according to the Pew Research Center.

A Safeco Field official confirmed the devotional was the largest “non-sporting event in the history of Safeco Field” and the second-largest event the venue has ever hosted, said Elder Gary F. Gessel, an Area Seventy.

Speaking one week after celebrating his 94th birthday, President Nelson addressed the topic “lessons life has taught me” and shared five lessons. 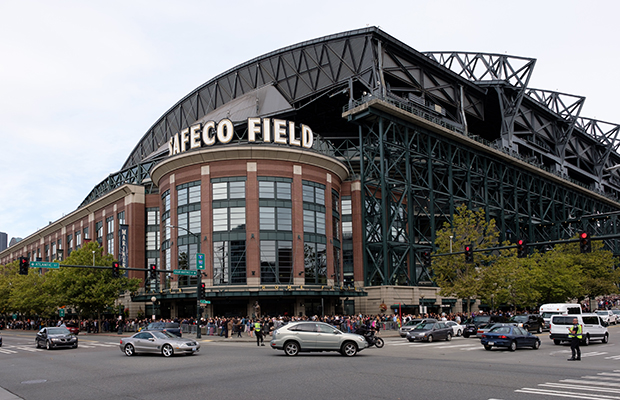 President Nelson began his remarks recalling an experience his family had years ago when they took several of their nine daughters on a rafting trip down the Colorado River through the Grand Canyon. On the second day of the trip, as the family approached Horn Creek Rapid, President Nelson put one arm around his wife and the other around his youngest child. “As it flexed over the brink, that rubber raft became a catapult and shot me like a stone from a slingshot—right over the raft and into the churning waters of the Colorado River,” he said. “I felt like an egg in an eggbeater.”

On the last day of the journey, the family approached the steepest and most dangerous rapid of the journey, Lava Falls. With Horn Creek Rapid fresh in his memory, President Nelson “instructed each family member to hold tightly to the ropes on the raft, knowing that the raft would always come to the top of the water.”

From the experience, President Nelson learned a powerful lesson. “We are all, metaphorically speaking, on a rafting trip through life,” he said. “Usually it is beautiful and peaceful, but at some point we hit mighty rough rapids. … As we face churning challenges in our lives, the greatest and only real safety comes as we hold on to the raft, which is the restored gospel of Jesus Christ.”

Clinging to others can help as we minister to each other, but not if it means letting go of the raft, he said. “If I have learned anything in my life, it is that our ultimate security and our only enduring happiness lies in holding on to the iron rod of the restored gospel of Jesus Christ, complete with its covenants and ordinances. When we do so, we can safely navigate through rough waters because we have access to God’s power.” 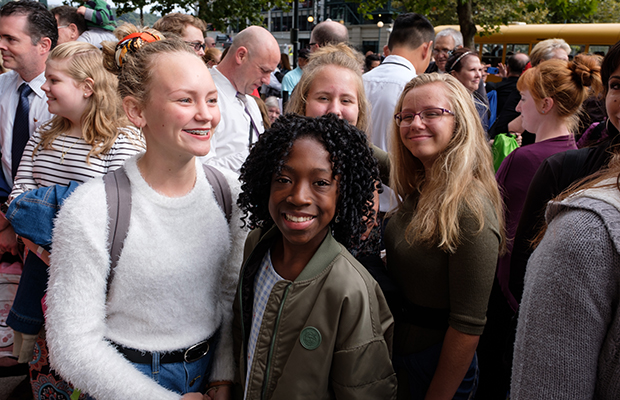 People gather at Safeco Field in Seattle, Washington, to hear President Russell M. Nelson of The Church of Jesus Christ of Latter-day Saints on Saturday, September 15, 2018.

2. The Book of Mormon is the word of God

He invited the nurse and her surgeon husband to read the book and loaned them his only copy. “When her husband returned my precious Book of Mormon to me, he casually tossed it to me and said, ‘Thanks a lot.’

“‘Thanks a lot?’ I said. ‘That is a totally inappropriate answer for one who has read the Book of Mormon. You didn’t read it, did you?’”

The couple took the book back, read it, and asked to know more. President Nelson subsequently taught and baptized both of them.

“I plead with you to make reading the Book of Mormon a regular part of your daily life,” he said. “Doing so is one of the surest ways ‘to hang on to the raft’ and learn the truths of the restored gospel.” 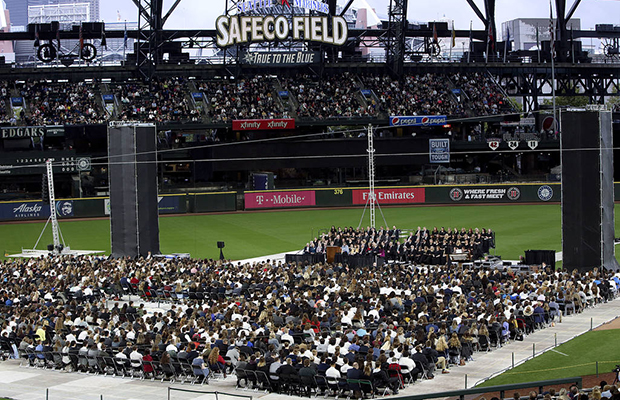 3. The honors of men fade

President Nelson said life has taught him that “the honors of men, exhilarating as they may seem at the time, fade into oblivion compared to what the Lord has in store for covenant-keeping children—the supernal gift of eternal life. That’s the greatest of all of God’s gifts.”

This came clearly into focus years ago as President Nelson was traveling with four passengers on a flight from Salt Lake City to St. George Utah; during the flight, one of the two engines exploded, sending the small plane into a downward spiral.

President Nelson said he felt strangely calm. “Events of my life rapidly flashed before me. I thought about all the framed degrees, awards, and honors on my office wall and the various uniforms, tuxedos, and doctoral robes that I’d worn in my life.”

In his dying moments those honors meant nothing to him. What did matter was his wife and children—to whom he was sealed in the holy temple.

“Miraculously, the free fall extinguished the flames,” he said. “I plead with you not to let the temptations of the world—including the time-consuming allurements of your occupation—distract you from the real reason you are here on earth. Will you use your agency to choose Jesus Christ and His gospel?” 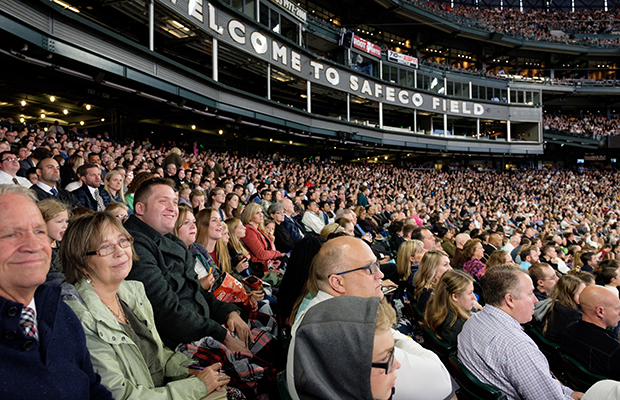 4. The Lord uses the unlikely

In 1985, just 19 months after being called as an Apostle, President Nelson was asked by President Ezra Taft Benson to open the countries of Eastern Europe for the preaching of the gospel.

“I had spent much of my professional life opening hearts to perform life-saving operations, but I had no experience that would lead me to believe I could open countries for the preaching of the gospel,” he said. “And yet, a prophet had given me an assignment, so I set out to do what seemed utterly impossible.”

From the outset of the task—undertaken during the Cold War when all of Eastern Europe was “under the oppressive yoke of communism,” obstacles were placed in his way. “Well, the Lord is able to do His own work, and I was privileged to watch the unfolding of one miracle after another—always and only after I had brought my best thinking, my most fervent prayers, and my most courageous efforts to the task,” he said. “I learned that the Lord likes effort. … He blesses our best efforts.”

In the year 1992, President Nelson was able to report to President Benson that the Church was established in every country in Eastern Europe.

“If you are doing your best to make the Lord Jesus Christ the center of your faith, your life, and that of your family—if you will hold on to Him and His gospel as tightly as our family held on to that raft on the Colorado River—He will work miracles for you in your lives.”

President Nelson’s final lesson is that “we are happiest when we are thinking of someone other than ourselves.”

“A fundamental characteristic of followers of Jesus Christ is the desire and willingness to care for others,” he said. “This is why at the last general conference we emphasized ministering as a higher, holier way of taking care of each other.”

This is also why the Church engages in humanitarian service around the globe. “Whether we are digging wells in Africa, providing wheelchairs to those in need in Peru, or among the first to respond after natural disasters anywhere in the world, our efforts are designed to help all mankind,” President Nelson said.

None of the Church’s shipments of relief material are ever labeled “For Latter-day Saints only.”

“As a Church, we need to be doing what the Savior wishes us to do,” concluded President Nelson. “And as a people, we need to be looking and acting like true followers of Jesus Christ.

“Our message to the world is simple and sincere: We invite all of God’s children on both sides of the veil to come unto their Savior, to receive the blessings of the holy temple and qualify for eternal life, so that they can have enduring joy now and forever.”