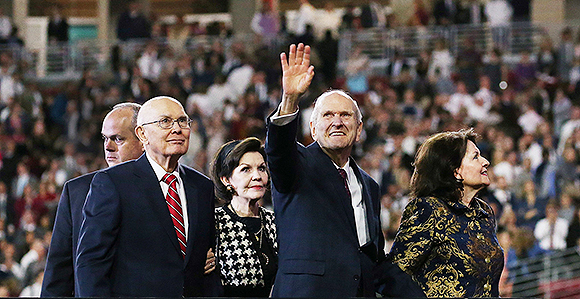 In a day of repeated and widespread prophetic messaging across the state of Arizona, President Russell M. Nelson summed up his call to action with a personalized invitation that sent a near-audible ripple of listeners giving increased attention.

“I have an invitation for you as the Arizona battalion of the Lord’s army to help gather Israel on both sides of the veil,” proclaimed the 94-year-old President of The Church of Jesus Christ of Latter-day Saints as he spoke to about 65,000 gathered in State Farm Stadium, including the nearly 9,000 youth and young adults seated on the stadium floor for the Sunday, February 10, event.

Called by a variety of names ranging from the Arizona Member Devotional to the Greater Phoenix Area Devotional, the event was the day’s finale for President Nelson, who had a guest column published in the morning issue of the state’s largest newspaper, the Arizona Republic; a television interview shared across the state’s television stations; several receptions with a collection of the state’s civic, educational, and faith leaders; a question-and-answer session with 10 young single adults; and then the stadium devotional, which was also broadcast live to meetinghouses across Arizona.

The devotional in the indoor stadium was the largest congregation to listen to President Nelson, the largest Church gathering ever in the state of Arizona, and one of the largest of the Church since the area and regional conferences held in the 1970s and 1980s, which included a May 1980 Southern California area conference in the Rose Bowl that drew an estimated 75,000. 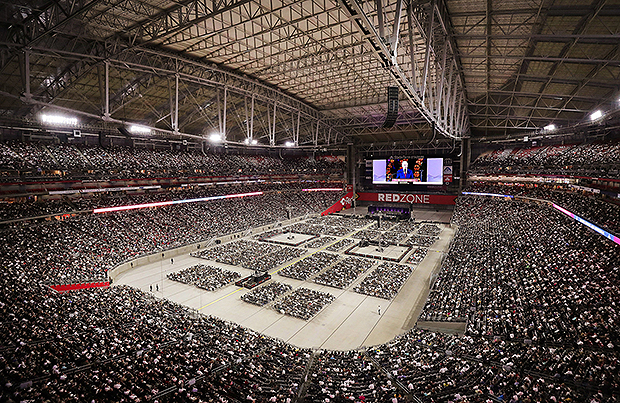 President Russell M. Nelson speaks to a record crowd of 65,000 people gathered for a devotional at the State Farm Stadium in Phoenix on Sunday, February 10, 2019. Photo by Jeffrey D. Allred, Deseret News.

The Church’s first presence in Arizona came as the Mormon Battalion marched through during the winter of 1846–47, with settlers later arriving in the 1870s. One of the early temples outside of Utah was the Mesa Arizona Temple, which opened in 1927 and is one of three currently operating temples in the metro Phoenix area (along with temples in Gilbert and Phoenix) and six overall in the state.

Arizona is home to nearly 430,000 Latter-day Saints (263,000 in metro Phoenix) and six missions (five in the Valley of the Sun), as well as the early childhood home of President Spencer W. Kimball, the Church’s 12th President, who served from 1973 through 1985. 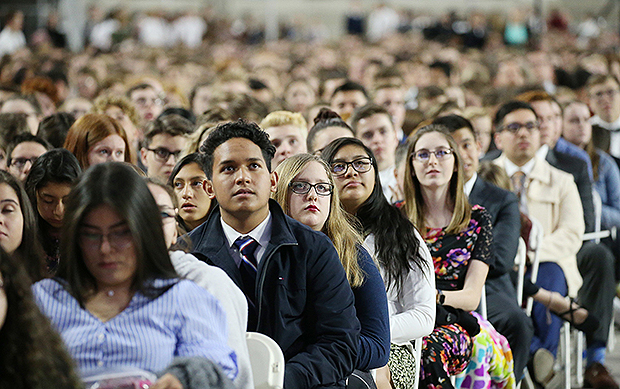 President Nelson listed the promises to Abraham made by Jehovah of the Old Testament some 4,000 years ago—that the Savior of the world would come through Abraham’s lineage; that Abraham was promised an eternal increase, or a posterity “as innumerable as the stars”; that Abraham’s descendants would bear the priesthood of God and administer its exalting ordinances; and that all the nations of the earth will be blessed through Abraham’s lineage. In his “Arizona battalion” invitation, President Nelson asked individuals and families to pray daily for opportunities to be involved in the gathering effort as he tied together the Abrahamic covenant, the Book of Mormon, and the gathering of Israel.

The latter is done as missionaries take the gospel across the globe, as the light of the gospel and the love of the Lord infuse the lives of all, as men are ordained to the priesthood and women are endowed with the power of the priesthood through their temple activity, and as temples continue to dot the earth, he said.

“My dear brothers and sisters, these promises—first given to Abraham and later reaffirmed with his son Isaac and his grandson Jacob, who became ‘Israel’—are known as the Abrahamic covenant and are available to all of God’s children,” President Nelson said. “Yes, these divine promises are available to you!”

When the house of Israel rejected the teachings of the Lord and persecuted the prophets in biblical times, Jehovah scattered His people far and wide among the heathen—but with a promise that one day they would be gathered back into the fold of the Lord, he said. “And that promised day is today.” 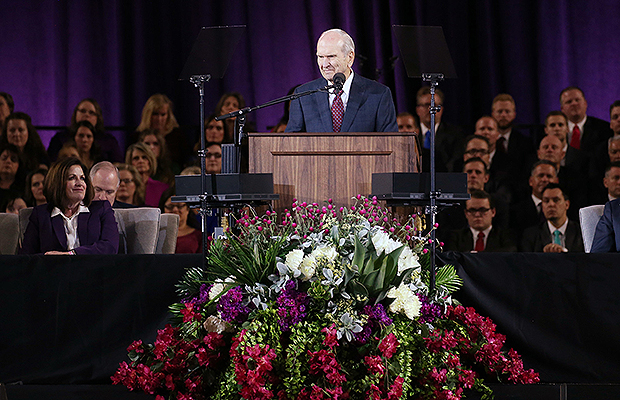 Citing the restoration of priesthood and its keys through heavenly messengers such as Peter, James, John, Moses, Elias, and Elijah as key to “gather together in one all things,” President Nelson emphasized the keys of the gathering of Israel coming from Moses and the restored keys of sealing authority from Elijah.

The Book of Mormon, he added, serves as a tangible sign to all the world that the Lord has commenced to gather Israel and fulfill the Abrahamic covenant. It contains the fulness of the gospel and teaches the Savior’s Atonement, with its two primary and oft-repeated topics being Jesus Christ and the gathering of Israel.

President Nelson posed the question of what the gathering of Israel looks like, then listed four examples, punctuating each with a pointed phrase at the end of each. 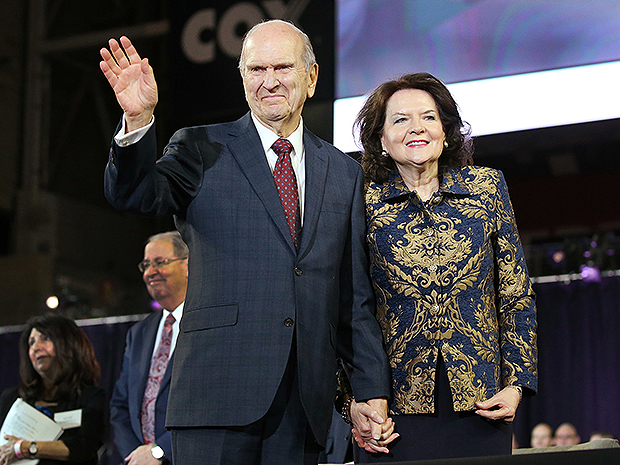 Sister Nelson recounted personal and shared experiences with her prophet-husband in the 13 months since the passing of his predecessor, President Thomas S. Monson, and President Nelson’s sustaining as the Church’s leader. She also acknowledged the personal confirmation she received—twice—of his mantle.

She also shared her witness of him receiving inspiration and revelation—often in the middle of the night, sometimes while she is in the room with him and other times when she leaves him to be alone. “I am a witness of being present, and I am a witness by being absent, that the Lord indeed instructs His prophet. …

“Everything in The Church of Jesus Christ of Latter-day Saints belongs to Jesus Christ,” Sister Nelson said. “The doctrine is His, the covenants are His, the ordinances are His, the priesthood power is His power. The Apostles are His. And the prophet is His prophet, chosen and instructed by Him.”

President Oaks spent much of his address reviewing and underscoring the many changes and points of emphasis from President Nelson and other Church leaders from the April and October general conferences—the changes in the Sunday worship schedule, the youth advancing to classes and quorums at the first of the year rather than on a birthday, the call to spend more time in the temple, the changes in the curriculum, the emphasis on a home-centered Church, the move to ministering, the challenge for the women to read the Book of Mormon by the end of 2018, and the correct use of the Church’s name. 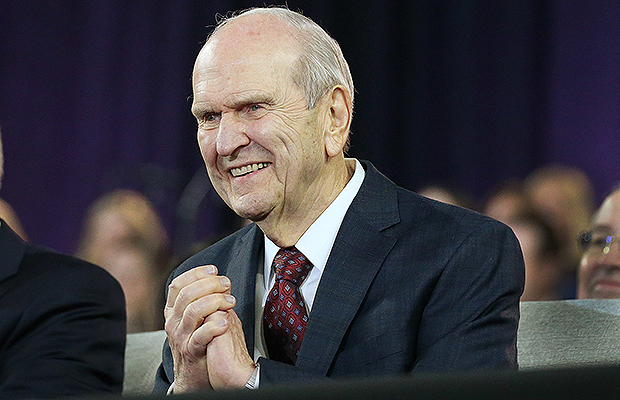 “The changes we have experienced in our Church meetings and policies should help us, but by themselves they won’t get our members to where our Heavenly Father wants us to be,” President Oaks said. “The changes that make a difference to our position on the covenant path are not changes in Church policies or practices, but the changes we make in our own desires and actions.”

He focused some of his remarks on the youth and young adults in attendance, highlighting the importance of the gospel and the fact that God is our Father and Jesus Christ His Son. “And Their commandments and our obedience remain essential, whether we travel by wagon or spaceship and whether we communicate by voice or texting.”

He cautioned against tattoos and piercings, immodesty, and pornography.

Regarding technology, he said cell phones “should be your slaves, not your masters. … Cut it back and rejoin the world of those who talk face to face.”

President Oaks also urged care in how youth and young adults label themselves, asking them to not define themselves by some temporary quality. “Our single best quality to characterize ourselves is that we are a son or daughter of God,” he said. “That fact overrides all other labels, including race, occupation, physical characteristics, honors, or even religious affiliation.” 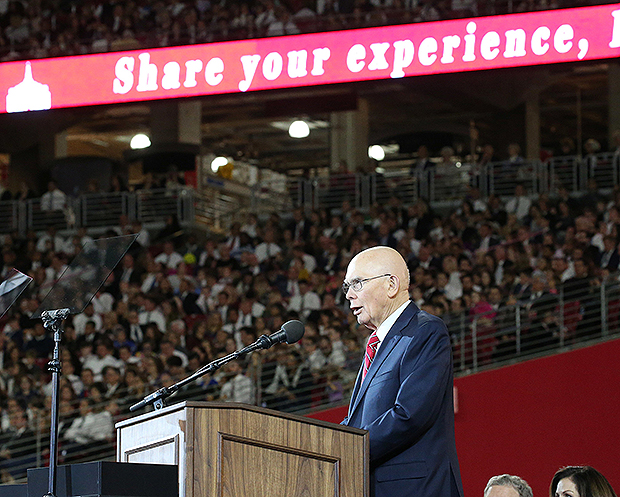 Displaying on the giant videoboards at both ends of the stadium a photo of President Nelson and President Oaks together, Sister Oaks underscored the energy and unity of the pair, who have served side by side since their calls to the apostleship in the April 1984 general conference.

“Loyal Saints of Arizona assembled to hear and heed our prophet’s words, you must be very special,” she said, “because only 15 Apostles of Jesus Christ walk this earth, and two of them have been directed to come here in your behalf.”

Testifying that the power of coming to Christ and following His teachings as taught by modern-day prophets is both tangible and attainable, Sister Oaks reminded: “We are not alone. We are children of a Heavenly Father who loves us and desires that we come to Him.

“Tonight Heavenly Father has sent His messengers to teach and inform us. I beg you to listen to what they say. I promise that their teachings, if you apply them, will uplift and edify you.” 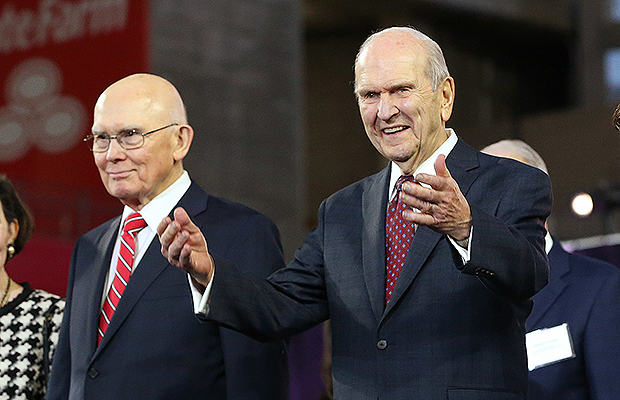 Gail Ricks of Gilbert, Arizona, who attended with her husband and six children, said she was touched by “the prophet’s presence and the spirit he carries. I loved the message of gathering Israel and that we can have a mini-MTC (missionary training center) in our home.”

She was thrilled to hear one of her children say of the event: “We are in the same room as the prophet—but it is a really large room.”

Eleven-year-old Hailey Hinton of Peoria, Arizona, said it was her first time being with a President of the Church—other than attending general conference—as she sat six rows above the floor. “I was really excited to see him walk in,” she said of President Nelson.

She said she also enjoyed Sister Nelson speaking of the process of inspiration and revelation for her husband at night and how he wrote them down.

Hailey’s father, President Sean L. Hinton of the Peoria North Arizona Stake, appreciated the rallying cry for him, his family, and his fellow members from the prophet.

“We have a prophet on the earth, and he came to see us and to tell us to join the Arizona battalion,” he said. “And he made it very specific for us.” 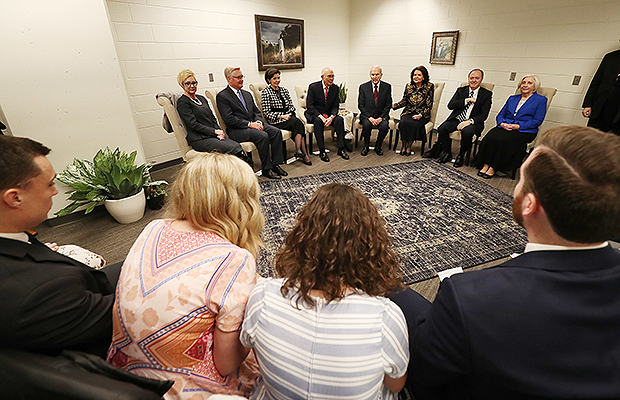 President Russell M. Nelson and President Dallin H. Oaks of the First Presidency speak with 10 young single adults prior to a devotional at the State Farm Stadium in Phoenix on Sunday, February 10, 2019. Photo by Jeffrey D. Allred, Deseret News. 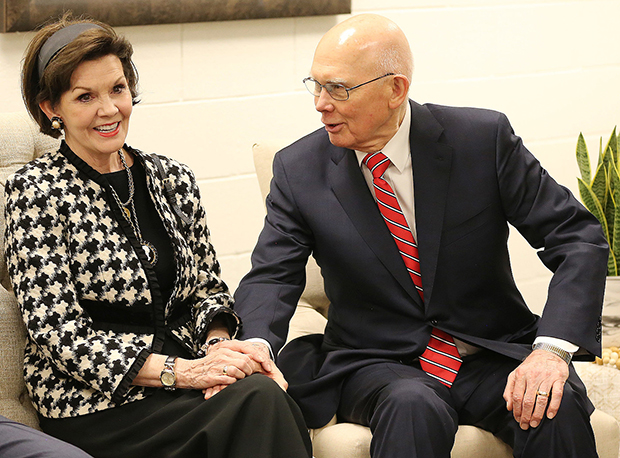 President Dallin H. Oaks, First Counselor in the First Presidency of The Church of Jesus Christ of Latter-day Saints, speaks to 10 young single adults with his wife, Sister Kristen Oaks, prior to a devotional at the State Farm Stadium in Phoenix on Sunday, February 10, 2019. Photo by Jeffrey D. Allred, Deseret News.