Name of the Church “Not Negotiable,” President Nelson Says 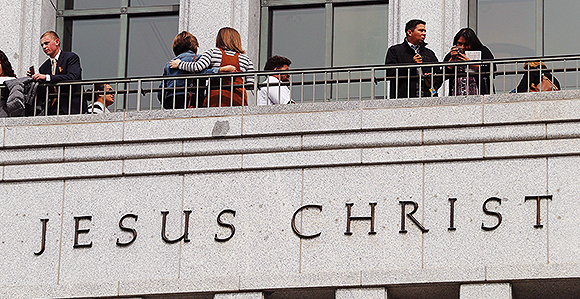 “When we discard the Savior’s name, we are subtly disregarding all that Jesus Christ did for us—even His Atonement.” —President Russell M. Nelson

Nearly two months after releasing an official statement regarding the proper name of The Church of Jesus Christ of Latter-day Saints, President Russell M. Nelson revisited the “course correction” in his concluding address of the Sunday morning session of the October 2018 general conference.

“I did this,” he said of the August 16 statement, “because the Lord impressed upon my mind the importance of the name He decreed for His Church, even The Church of Jesus Christ of Latter-day Saints.”

Within days, he spoke more in detail on the topic while holding devotional meetings in central and eastern Canada. (See related story.)

Knowing his call for the Church’s correct name drew mixed response—some making immediate changes, others dismissing it as inconsequential and even others wondering why try—President Nelson listed in his conference talk what the effort is “not.” It's not a name change, not rebranding, not cosmetic, not a whim, and certainly not inconsequential.

“Instead, it is a correction. It is a command of the Lord,” he said, citing the Savior’s instruction Himself, both in latter-day revelation (see Doctrine and Covenants 115:4) and after the resurrected Christ appeared in the Americas (see 3 Nephi 27:7–8).

“Thus, the name of the Church is not negotiable,” he said. “When the Savior clearly states what the name of His Church should be, and even precedes His declaration with ‘Thus shall my church be called,’ He is serious. And if we allow nicknames to be used and adopt or even sponsor those nicknames ourselves, He is offended.”

When names such as “LDS Church,” “Mormon Church,” and “Church of Latter-day Saints” are used, the most glaring omission is the absence of the Savior’s name, President Nelson said.

“To remove the Lord’s name from the Lord’s Church is a major victory for Satan,” he added. “When we discard the Savior’s name, we are subtly disregarding all that Jesus Christ did for us—even His Atonement.”

He later added: “After all He had endured—after all He had done for humankind, I realize with profound regret that we have unwittingly acquiesced in the Lord’s restored Church being called by other names, each of which expunges the sacred name of Jesus Christ.”

Despite members renewing a sacred promise to take upon themselves the name of Christ when partaking of the sacrament as well as promising to follow Him, repent, keep His commandments, and always remember Him, omitting His name from His Church results in inadvertently removing Him from a central focus in life.

“Taking the Savior’s name upon us includes declaring and witnessing to others—through our actions and our words—that Jesus is the Christ. Have we been so afraid to offend someone who called us ‘Mormons’ that we have failed to defend the Savior Himself, to stand up for Him even in the name by which His Church is called?” he asked.

“If we as a people and as individuals are to have access to the power of the Atonement of Jesus Christ—to cleanse and heal us, to strengthen and magnify us, and ultimately to exalt us—we must clearly acknowledge Him as the source of that power. We can begin by calling His Church by the name He decreed.”

This is not the first time President Nelson has addressed the Church’s name in a general conference address. As a member of the Quorum of the Twelve Apostles, his April 1990 address was titled “Thus Shall My Church Be Called,” a topic President Gordon B. Hinckley as a First Presidency counselor revisited in conference six months later.

The term Mormon may confuse others into thinking members worship the Book of Mormon prophet. “Mormon” and “Mormon Church“ was also used in the early days of the restored Church as epithets and cruel, abusive terms.

Recognizing the many worldly arguments and reasons against restoring the Church’s correct name, including advantages of search engine optimization in the digital world, President Nelson said such arguments would prevail if it was simply branding a man-made organization.

“But in this crucial matter, we look to Him whose Church this is and acknowledge that the Lord’s ways are not, and never will be, man’s way,” he continued. “If we will be patient and do our part well, the Lord will lead us through this important task. After all, we know that the Lord helps those who seek to do His will, just as He helped Nephi accomplish the task of building a ship to cross the sea.”

Calling for members to be courteous and patient in the name-correction effort, President Nelson said the rest of the world may or may not follow their lead. “But it is disingenuous for us to be frustrated if most of the world calls the Church and its members by the wrong names if we do the same,” he added.

He offered suggestions on how to respond to questions or incorrect names. “If someone should ask, ‘Are you a Mormon?’ you could reply, ‘If you are asking if I am a member of The Church of Jesus Christ of Latter-day Saints, yes, I am!’ If someone asks, ‘Are you a Latter-day Saint?’ you might respond, ‘Yes, I am. I believe in Jesus Christ and am a member of His restored Church.’”

President Nelson promised members that if they do their best to restore the correct name, “He whose Church this is will pour down His power and blessings upon the heads of the Latter-day Saints, the likes of which we have never seen. We will have the knowledge and power of God to help us take the blessings of the restored gospel of Jesus Christ to every nation, kindred, tongue, and people and to prepare the world for the Second Coming of the Lord.”

Attendees exit the Conference Center after the conclusion of the Saturday morning session of general conference on October 6. Photo by Jeffrey D. Allred, Deseret News.