Inspired, Member-Submitted Music One Evidence That the Lord Is Hastening His Work 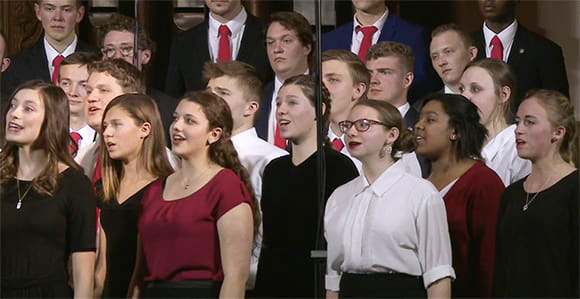 Youth sing at the Spring Church Music Festival on February 22, 2019, at the Assembly Hall on Temple Square. The festival honored award-winning music from the 2018 Church Music Submission.

“It’s not just the prophets and apostles and Church leaders that receive revelation. I think [the Spring Church Music Festival] is a true indicator that the members of the Church themselves are receiving inspiration. The arts are one of those ways that inspiration has come and can really touch a lot of people.” —Marshall McDonald, Salt Lake Institute of Religion Combined Choirs Director

“Behold, I will hasten my work in its time.”

Most Latter-day Saints may think that the changes in recent years—ministering, the two-hour church block, or even the recent announcement that missionaries can talk to their families each week—are evidence of that pronouncement made by the Lord about hastening His work (see Doctrine and Covenants 88:73).

And most Latter-day Saints, when thinking about the “process of restoration”—for which President Nelson encouraged them to “eat their vitamin pills” and “get [their] rest”—probably don’t think of the annual Church Music Submission.

Nevertheless, Church music manager Steve Schank, quoting Elder Donald L. Hallstrom’s words at a post-conference devotional last October, said our day is “an era of unfolding revelation” and that inspired music is very much included in that process.

Schank, speaking at a banquet for the Church Music Submission award winners being honored at the Spring Church Music Festival, said he believes the work Latter-day Saint musicians do is an integral part of the continuing restoration of which President Nelson spoke.

What is the Church Music Submission?

Each year, the annual Church Music Submission welcomes members from around the world to submit original music in 10 different categories ranging from hymns to international music. Awards are given to the pieces determined to best meet the criteria and needs of the Church at the time by a panel of expert judges (see Church Music Submission Guidelines).

The award-winning musicians are then honored by hearing their works performed at one of the biannual Church Music Festival concerts the following year, and their music is published and made available for use online.

Katie Bastian, a music manager for the Church who helped put together the 2019 Spring Church Music Festival, said 2018 was a record year for the Church Music Submission. Members submitted more than 1,000 pieces of music for consideration—blowing the previous high (around 700) out of the water.

Although more members might be more aware of the Church Music Submission since the June 2018 announcement that the Church songbooks would be revised and unified, Bastian said the submission has always had the same purpose: draw God’s children closer to Christ.

“That process of discovering how to put your thoughts, feelings, and testimony into music is definitely a growing process,” Bastian said, “but we hope that that opportunity strengthens people’s testimonies and their desire to keep moving forward in faith.”

The power of music to change lives

The 2019 Spring Church Music Festival, held on February 22, honored the 2018 awardees for the Church Music Submission. The event, a free concert held for the public and live-streamed on ChurchofJesusChrist.org will be later published in Media Library, featured 22 award-winning submissions from across several different categories.

Marshall McDonald, the director of the combined choirs of the Salt Lake Institute of Religion, who performed the music, said the choirs started learning the music when the semester began in January—leaving them just two months to have all 22 pieces “learned, polished, memorized, and mastered.”

Despite the short practice time, the choir did just that. Everything was memorized, even a piece in French.

Alice Goldthorpe, a composer from Melbourne, Australia, who wrote new music to “Les anges dans nos campagnes” (“Angels We Have Heard on High”), said the performance exceeded her expectations.

“It was amazing,” Goldthorpe said. “They did very well with the French. I was impressed that they sang it all from memory. … The choir is very accomplished, and the harpist is beautiful. It was an honor to be able to attend the inaugural performance of it.”

But the preparation for the concert wasn’t just about memorization and learning notes, McDonald said. He was quick to emphasize that he and his students “had sacred experiences focusing on the doctrines and truths” in the music.

“We felt closer to the Savior, felt closer to His gospel, and have stronger resolve to live it in our lives,” McDonald said. “We hope that [the concert] can be the beginning of the opportunity for this music to touch people worldwide, both in and outside of the Church.”

After all, bringing God’s children closer to the covenant path is what inspired music can help each member do, said Elder Larry S. Kacher, a General Authority Seventy. Speaking to musicians at the banquet before the festival, Elder Kacher said music can bring the Spirit into our lives, but it shouldn’t end there.

“My invitation to you tonight is to think about the one—to recognize the blessings that you bring into people’s minds through the talents that you have, but also an invitation to combine those talents with … helping Heavenly Father’s children progress on the covenant path,” Elder Kacher said. “As we expand our collective vision, [listeners] won’t just feel good. The Spirit won’t just be strong, but lives will be touched and hearts changed, and Heavenly Father’s children will receive all the blessings of the gospel of Jesus Christ.”

Hastening the Restoration through music

It might not be a seemingly earth-shattering announcement or unexpected change, but the Spring Music Festival (and the Church Music Submission)—for McDonald—was just one example of the many ways members are hastening the Lord’s work of restoration on the earth.

“It’s not just the prophets and apostles and Church leaders that receive revelation,” McDonald said. “I think tonight is a true indicator that the members of the Church themselves are receiving inspiration. The arts are one of those ways that inspiration has come and can really touch a lot of people.”

After all, McDonald said that it’s not just the most talented musicians who make the biggest impact. It’s the most inspired.

“Anyone that feels inspired can pray and go about that process of receiving revelation and using and developing their talents,” McDonald said. “I hope it encourages all of us to think about what our talents are and pray and decide how we can use those to help hasten the work and build the Lord’s kingdom.”

Goldthorpe, whose song won an award in the new international category, said this was true for her.

“I’m not a professional composer, but I asked the Lord to help me,” she said, “and I know that He helped me to do that.”

How to make the most of the Church Music Submission: 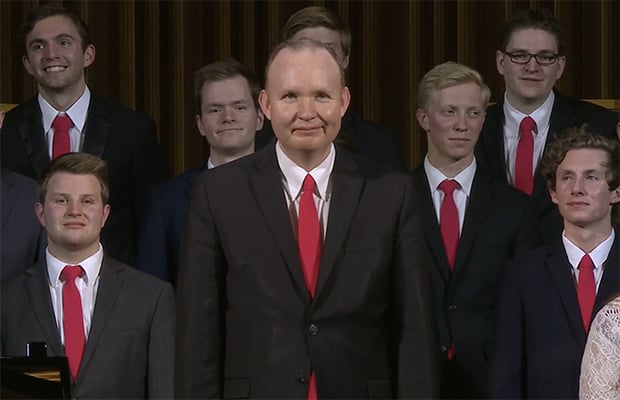 Marshall McDonald, the director of the combined choirs at the Salt Lake Institute of Religion, helped his students learn and memorize all of the music performed at the Spring Church Music Festival. He said they had spiritual experiences learning about the messages behind the music. 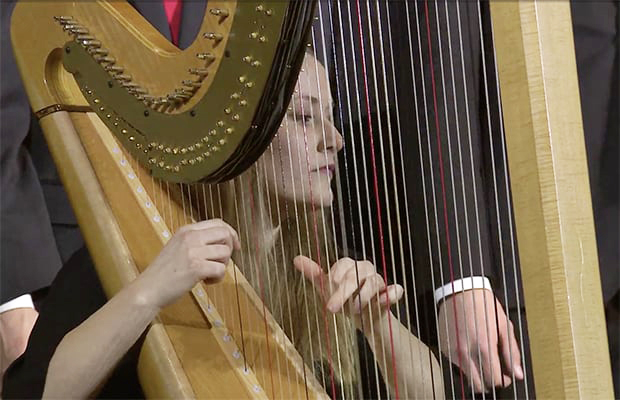 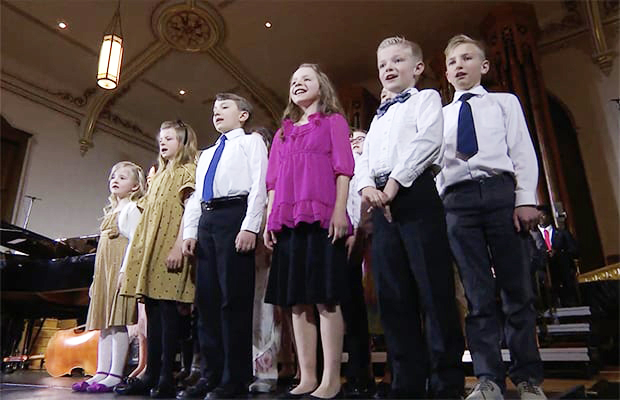 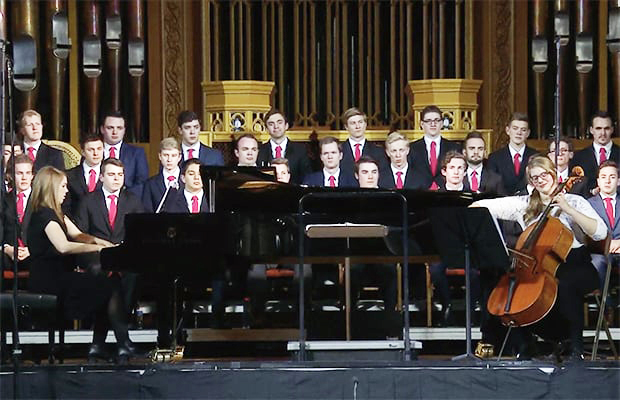 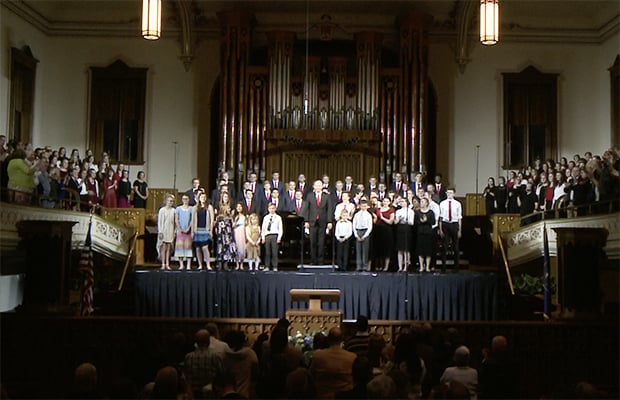 The combined choirs at the Salt Lake Institute and other musicians take a bow after the Spring Church Music Festival on February 22, 2019, in the Assembly Hall on Temple Square.