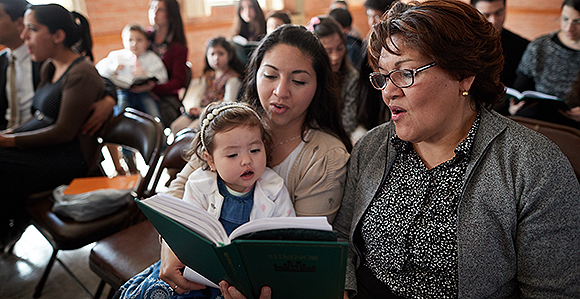 Sacred music teaches the doctrines of the gospel, nourishes us spiritually, and has the power to unify Church members throughout the world. The Church has announced it is revising the hymnbook and children’s songbook and invites members to participate.

“We desire to offer a consistent core collection of hymns and songs in every language that reflects the diverse needs of the global Church in our day.” —Elder Ronald A. Rasband of the Quorum of the Twelve Apostles

The Church has announced plans to publish new, unified editions of both Hymns and the Children’s Songbook. And members are invited to participate in the revision process in unprecedented ways.

Why the new editions?

“We recognize the power that sacred music has to unify the members of the Church throughout the world,” said Elder Ronald A. Rasband of the Quorum of the Twelve Apostles. “We desire to offer a consistent core collection of hymns and songs in every language that reflects the diverse needs of the global Church in our day.”

This core collection means that “members of the Church, no matter where they live in the world, will have the same hymns and the same songs and the same hymn numbers!” said Elder Erich W. Kopischke, a General Authority Seventy and an adviser to the revision project. “We will literally be singing from the same page in every language.” (Currently, hymnbooks and hymn numbers vary widely, which is inconvenient for multicultural wards and branches or for visitors who speak a different language.)

The revision process will also:

How you can help

Under the direction of the First Presidency, committees comprised of members with diverse musical and cultural expertise will recommend revisions as they consider the feedback members provide and the original music members submit to newmusic.ChurchofJesusChrist.org.

Provide feedback. “The opportunity for members to participate in the revision process like this is unprecedented,” said Elder Kopischke. “We want the input of the members so we can better understand their needs. What are your favorite hymns and songs to sing at church and at home? Which ones do you think should be removed?” he said.

To provide feedback, simply take the survey on newmusic.ChurchofJesusChrist.org.

“Perhaps the most meaningful hymns and songs of the Restoration have not yet been written,” said Elder Curtis. “We encourage our talented members to prayerfully consider what they might add to the body of music already known and loved by the Church.”

About 6,000 original pieces were submitted for the current 1985 edition of Hymns, when the Church’s membership hovered around 6 to 7 million. Now, with more than 16 million members, and members already sending in 500 to 700 music submissions every year, the committees anticipate they will receive many new original works to choose from. 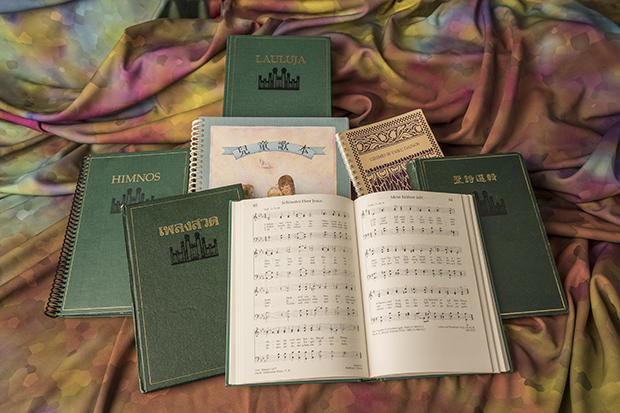 Various language versions of the current Hymns and Children’s Songbook.

“Along with prayer and the scriptures, hymns invite the Spirit into our hearts and strengthen our testimonies of Jesus Christ and His gospel,” said Elder Rasband. “As parents sing together with their children in their homes and in our congregations, the doctrines of the gospel will sink deep into their hearts and they will have increased power to keep on the covenant path as encouraged by our prophet.”

“Gospel-centered music will assist families worldwide in raising a sin-resistant generation,“ said Sister Cristina B. Franco of the Primary General Presidency. “Music in the new children’s songbook will be selected to teach the truths of the gospel in language that even children can understand.”

From the Mount of Olives, across the plains and valleys of the pioneers, and in every nation around the globe, disciples of Christ have sent their voices high in worship and praise through sacred music. As a source of doctrine, hymns and children’s songs have a unique way of feeding us spiritually while uniting us as families, congregations, and members of a worldwide church.

Calling Emma Smith to make the first selection of hymns in 1830, the Lord said, “For my soul delighteth in the song of the heart; yea, the song of the righteous is a prayer unto me, and it shall be answered with a blessing upon their heads” (D&C 25:12). 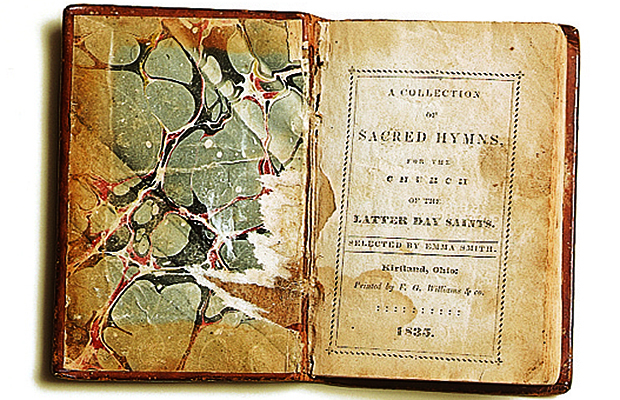 Church leaders also have long taught the importance of music in our worship.

“Music has power to provide spiritual nourishment,” President Russell M. Nelson said. “It has healing power. It has the power to facilitate worship, allowing us to contemplate the Atonement and the Restoration of the gospel, with its saving principles and exalting ordinances. It provides power for us to express prayerful thoughts and bear testimony of sacred truths” (“The Power and Protection of Worthy Music,” Ensign, Dec. 2009, 16).

Several English hymnbooks followed Emma’s 1835 90-hymn book. The Latter-day Saints’ Psalmody was the first hymnbook to include both music and text in 1889. Songs of Zion, published in 1908, included about 100 gospel hymns. The 1985 edition of Hymns, the Church’s current hymnbook, has 341 hymns in 38 languages, with several more languages approaching completion. 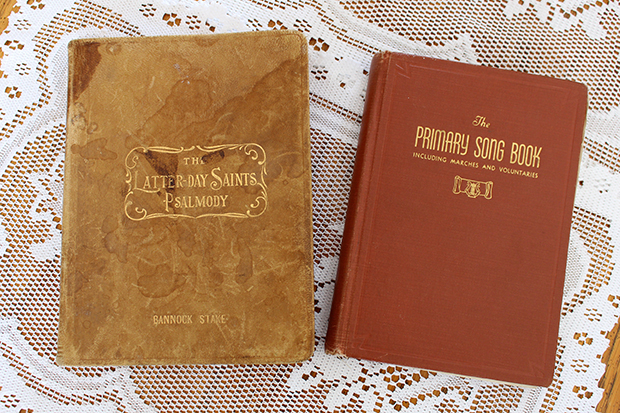 Left: The Latter-day Saints’ Psalmody was the first hymnbook to include both music and text in 1889. Right: The Primary Song Book was published in 1905.

“I still remember singing songs in Primary as a young child growing up in Argentina, said Sister Franco. “Those songs still ring in my ears, along with the gospel principles that they taught me while I was very young.”

Eliza R. Snow collected the first set of songs for children in 1880, published two years after the founding of the Primary Mutual Improvement Association. The Children Sing, published in 1951, known affectionately by members as “the blue book,” includes 199 songs divided into seven sections. Delicate pastel illustrations accompany the 268 songs in the currently used Children’s Songbook, first published in 1989 in 21 languages, which compiled favorite resources from previous songbooks like Sing with Me, More Songs for Children, and Activity Songs and Verses.

Various publications of the Church’s songs for children, including the current Children’s Songbook.