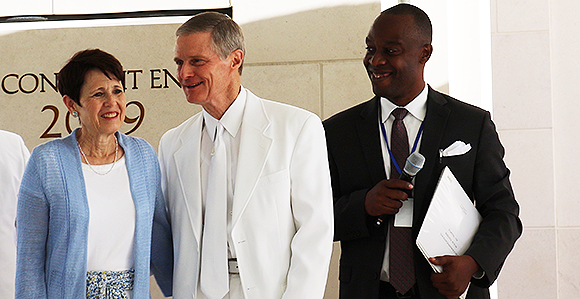 Elder David A. Bednar and Sister Susan Bednar participate in the cornerstone ceremony of the September 1, 2019, dedication of the Port-au-Prince Haiti Temple. Photo by Jason Swensen.

“On this day of dedication, I think not only of today but also of the future and what this temple will cause to happen in this country.” —Elder David A. Bednar

As Elder David A. Bednar of the Quorum of the Twelve Apostles stepped out of this island nation’s first temple and into the Sunday-morning sun, he was greeted by a cornerstone ceremony choir singing “The Morning Breaks” in French.

“You sang that magnificently,” the latter-day Apostle told the choir, “but we need to change just a few words in the first verse.”

The cornerstone choir enthusiastically sang the “updated” verse—as if the hymn’s author, Parley P. Pratt, had intended it that way all along.

Indeed, few mornings have dawned brighter on this often-troubled nation than on September 1, 2019—the dedication of the Port-au-Prince Haiti Temple.

“This is a day that I have waited a long time for,” said Emanuel Eximus, a Port-au-Prince native and a married father of three young sons. “Today, I am so amazed that we have a temple in my own country.”

A bit of context is needed to best understand that sentiment heard so often on Sunday. First, for decades, Latter-day Saints in Haiti have had no choice but to travel to the neighboring Dominican Republic or other areas to claim their temple blessings.

Many people here endure economic challenges—and paying for passports, transportation, and other costs can be almost impossible for many.

“I’ve only been able to go to the temple in Santo Domingo on two occasions,” said Eximus, a convert to the Church.

And Church leaders have also noted that many Haitian members have dreamed of the day when they could call their own land “a temple land” and worship in their own language, sitting shoulder to shoulder with their own friends and countrymen and countrywomen.

This weekend marked Elder Bednar’s first visit to Haiti—but he will never forget the historic significance of his assignment in this country.

“On this day of dedication, I think not only of today but also of the future and what this temple will cause to happen in this country,” he said Sunday just moments before the first of three dedicatory sessions.

Like temples all over the world, the Port-au-Prince Haiti Temple “is a place of supernal peace, which then prepares you to go back into the world and be stronger and more purposeful than perhaps you were before.”

When asked about his own priesthood leader, President Russell M. Nelson, traveling across South America even while Elder Bednar was serving in Haiti, the latter spoke of the “primary role” of an Apostle.

“This is the work of the ministry[,] . . . to try to help each individual understand the personal nature of the ministry of the Lord Jesus Christ. His work and ultimate desire is that every individual will receive these blessings [of the gospel] and apply them in their lives.”

Today there are over 23,000 Latter-day Saints in Haiti. Most can trace their involvement directly to the work of full-time missionaries, who began serving in this country in 1980. Later that year, the Haitian government officially recognized the Church, and a branch was organized in Port-au-Prince.

In 1983, one of Elder Bednar’s apostolic predecessors, then Elder Thomas S. Monson, traveled to a prominent point overlooking Port-au-Prince and dedicated Haiti for the preaching of the gospel.

While growth has been steady, Latter-day Saint Haitians have also known hardship. Poverty and social unrest remain realities of the day, even as the country continues its recovery from a massive earthquake in 2010.

But there is also joy to be had here, said Haitian member Bernardo Jean-Jacque.

“The temple is a good blessing for me,” he said, recalling his own costly trips to Santo Domingo.

But make no mistake—it was all worth it. Knowing that he has been sealed to his family “is the most important thing that has happened in my life.”

The temple ordinances the Jean-Jacque family will now perform frequently in Haiti’s first temple will allow them “to live our life better and prepare for the coming of Jesus Christ.”

The Jean-Jacques live a short drive from their friend Luke Surim, who is excited to serve as a temple worker in the newly dedicated edifice and offer spiritual care to his fellow Haitians.

“I know people who have wanted to go to the temple but did not have money for passports or to buy a visa,” he said. “So now this is a great blessing for the people of Haiti. They won’t need a passport—they can just ride a tap tap [Haiti’s traditional colorful buses] to get to the temple.”

A rising generation of youth in Haiti will answer mission calls after having participated several years in temple worship. That spiritual education will prove invaluable in their missionary work and lifelong Church service.

After the final dedicatory session, Elder and Sister Bednar bade farewell to scores of faithful Haitians who love them and will never forget their visit. Such feelings are mutual.

“I can picture husbands and wives coming to the temple with their children to be sealed together as families,” said Sister Bednar. “That’s what I’ll remember about this place—and envisioning of what’s going to happen here. It will be remarkable.” 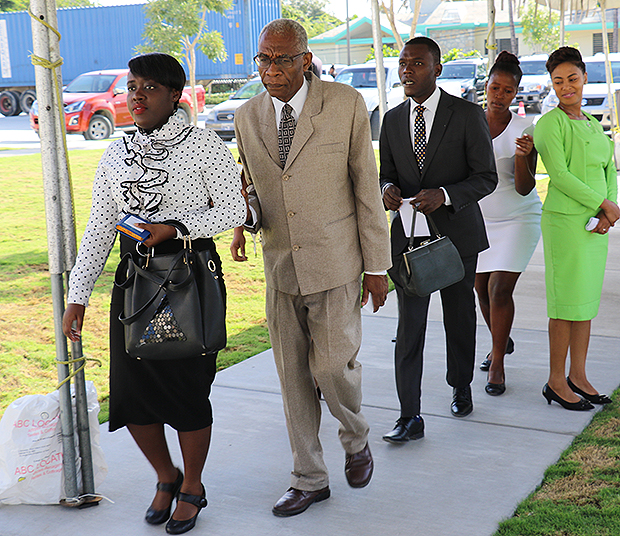 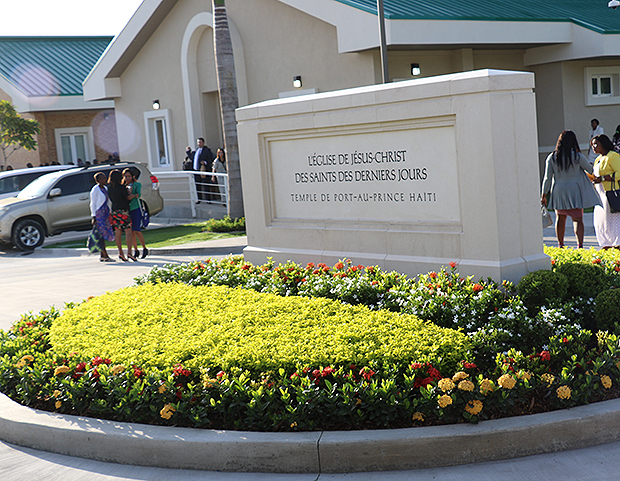 The sign at the entrance of the Port-au-Prince Haiti Temple on the day of its dedication. Photo by Jason Swensen. 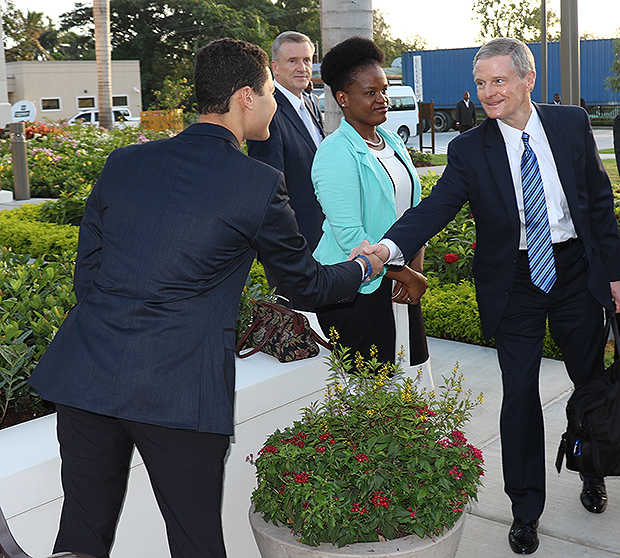 Elder David A. Bednar of the Quorum of the Twelve Apostles greets volunteers at the September 1, 2019, dedication of the Port-au-Prince Haiti Temple. Photo by Jason Swensen. 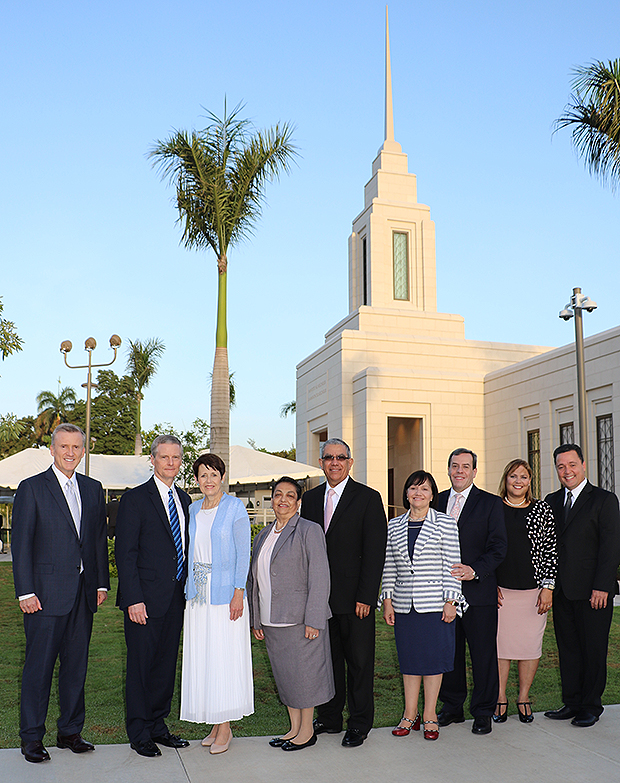 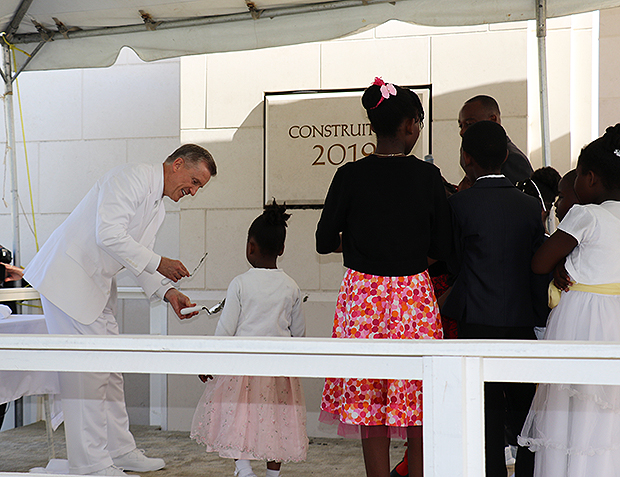 Elder Kevin R. Duncan, a General Authority Seventy and executive director of the Temple Department, helps a little girl place mortar on the capstone during the September 1, 2019, cornerstone ceremony of the Port-au-Prince Haiti Temple. Photo by Jason Swensen. 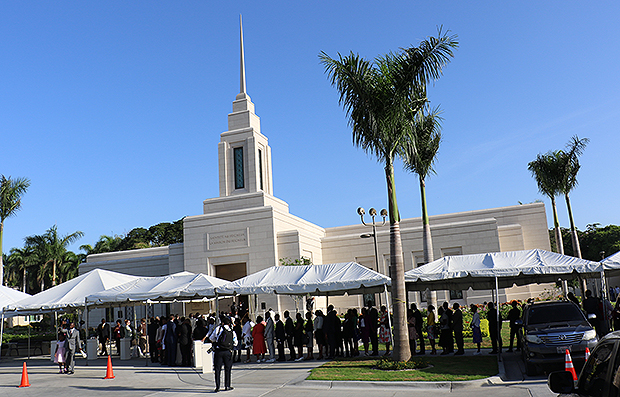 Hundreds wait to enter the Port-au-Prince Haiti Temple for the dedication on September 1, 2019. Photo by Jason Swensen. 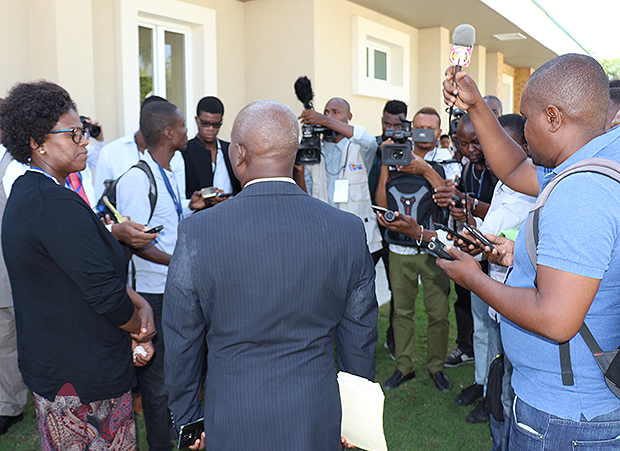