FSY Conferences Are Coming in May; Learn How They Developed Internationally

“The FSY program has drawn me closer to the Savior and has helped me to more fully understand the gospel.” —Adlih Orozco, Latter-day Saint youth

How does the Church retain and spiritually strengthen its young members?

Bring them together for a week and fortify them through a combination of inspired gospel learning and fun activities.

Elder Gerrit W. Gong of the Quorum of the Twelve Apostles described this particular strategy in a Face to Face event last November as it will be part of the Church’s new Children and Youth program.

“A five-day FSY conference brings you together in larger groups for classes, devotionals, and gospel study, and for dances, variety shows, and many other fun activities. You’ll love gathering, meeting other faithful youth and friends, including from beyond your ward and stake.”

Beginning this May, Elder Gong said, 300 stakes and 45,000 youth will begin attending FSY conferences in the United States and Canada.

For these young people, “this is new and very exciting,” the Apostle said.

However, FSY conferences are not new to many Latter-day Saint youth outside North America. In 2019, more than 65,000 youth and 10,000 Young Single Adult counselors participated in FSY conferences in over 45 countries, according to managers in the Church’s Priesthood and Family Department.

Many, like sisters Sucil and Adlih Orozco in Mexico City, say FSY conferences have blessed their lives.

“The FSY program has drawn me closer to the Savior and has helped me to more fully understand the gospel,” Adlih Orozco said. “It has strengthened my testimony because of what I have experienced and learned.”

FSY has also transformed the lives of young single adult counselors like Awauni Morris in New Zealand, a convert who recently received a mission call.

“I will always be grateful for FSY and the opportunity to serve,” Morris said. “In a few words, FSY is inspiring, life-changing, fun, amazing, the gathering of the chosen generation.” 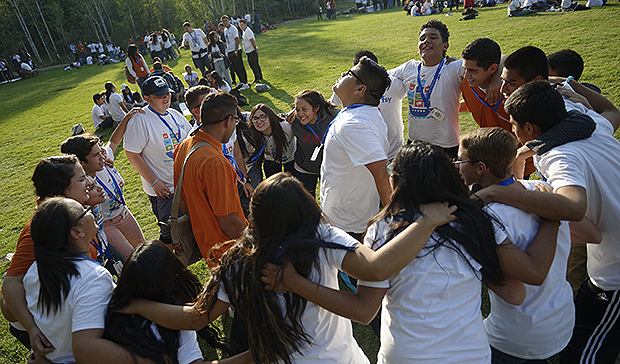 “The Seed Was Planted”

How and when did FSY conferences develop internationally?

It started with concerned area presidencies in different parts of the world asking the question, “How do we strengthen our youth?”

This is according to Elder Larry S. Kacher, a General Authority Seventy, who became involved with FSY conferences while serving in area presidencies in West Africa and Eastern Europe.

In those parts of the Church, youth programs have fewer numbers, are spread farther apart, and don’t have many opportunities to come together. So bringing the youth together for a week is significant, he said.

Elder Kacher related an experience from some years ago when he attended an FSY conference in Ukraine. Watching the hundreds of young Latter-day Saints, he recognized the joy and happiness in their faces as they realized they weren’t isolated in the gospel.

“The strength they get from each other means everything to these kids,” Elder Kacher said. “For them to see the strength of the Church when they all get together is a great blessing. It’s an opportunity to see they are not alone in their faith. It’s important to be able to gather together around common faith values and a common vision.”

Drawing upon the model of a Brigham Young University program called Especially For Youth, the Church started piloting special multi-stake youth conferences in 2006 in western Europe and South America—and “the seed was planted,” Elder Kacher said.

“From there it took off internationally, spreading from area to area,” he said.

Last year more than 160 FSY conference sessions were held in 46 countries and 20 different languages. The Church recently started holding FSY in India, Mongolia, and Indonesia, and this year, sessions are planned for Cambodia and Vietnam, according to the Church.

“It’s interesting to note that usually the Church introduces something here in Utah and it goes abroad,” Elder Kacher said. “In this case, it’s the opposite. It was provided to international members first, and now it’s coming to the United States and Canada.” 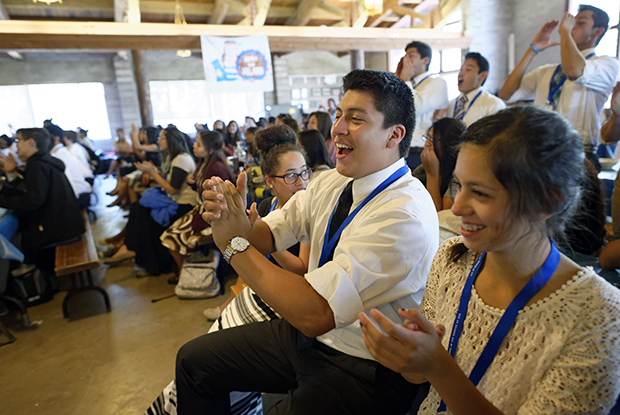 “Why Can’t We Do That Domestically?”

In May 2018, the Church announced the end of its relationship with Scouting and plans to create a new program for children and youth.

According to Elder Kacher, in the process of gathering information, Church leaders were impressed by the success of the FSY program internationally and asked, “Why can’t we do that domestically?”

Discussions with BYU began to take place, and in July 2019 the Church announced FSY conferences would be part of the new Children and Youth program.

“This major effort will include gospel learning, the privilege of service, personal development, and exciting activities,” said the First Presidency and Quorum of the Twelve Apostles in statement in the Children and Youth introductory guide for parents and leaders.

Everything came together, Elder Kacher said.

“I believe the Spirit of the Lord moved upon all the people that were working together, and people could see the vision of the blessings that were being brought to the Church internationally and how that could be brought to the youth domestically. They could see how it could become such a critical part of the Church’s Children and Youth program,” Elder Kacher said.

“It’s truly an example of walking by faith, the use of councils in a decision-making process and watching something be refined. When it’s right, it moves forward. This was one of those things.” 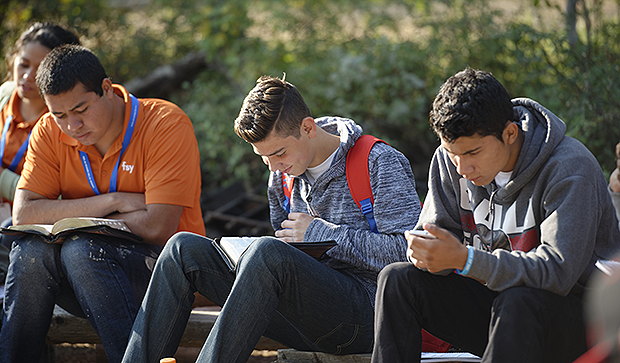 Young men study the scriptures at an FSY conference activity.

“Things Will Work Out”

The Face to Face event with Elder Gong gave Church members a small idea of what the five-day FSY conferences will look like but there are a few details to work out, Elder Kacher said.

One major challenge will be finding thousands of young single adult counselors to serve as leaders, examples, and mentors for the youth participants. It’s a volunteer position often filled by a returned missionary.

One benefit for counselors will be the chance to meet a potential “eternal companion,” Elder Kacher said. “It will be a great blessing in their lives.”

If interested, young single adults are encouraged to speak with their bishop and find more information at FSYcounselor.ChurchofJesusChrist.org.

Finding the right venue for each FSY conference is another concern. States like Utah have an abundance of local college campuses, but Africa and Eastern Europe aren’t set up that way, Elder Kacher said.

“But the Lord provides a way, and things will work out,” he said. “The most important thing they should know about FSY is that it’s an experience and an opportunity. If they will come to it with full purpose of heart to have their testimonies deepened, their faith deepened, they will find that the gospel truly is a gospel of joy.” 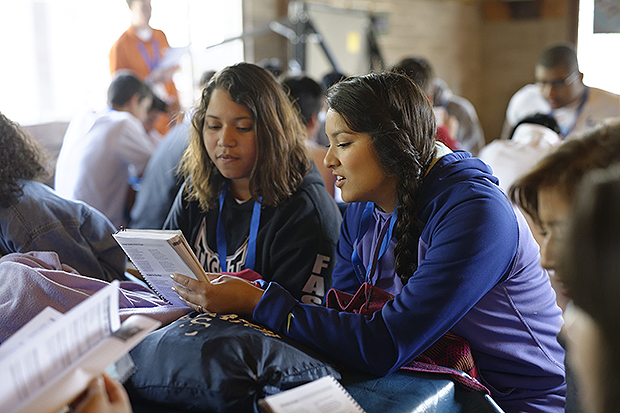 Young women study together during an FSY conference activity.

“You Are Not Alone”

The Orozco sisters have attended FSY sessions several times over the years in the Mexico City area. Not only have these experiences served to deepen their faith and testimonies, but the sisters have gained strength from observing other young people going through hard times, including those with physical or mental disabilities. They have watched the gospel change the hearts of some non-member participants.

“It only took one FSY session to change their lives,” said 18-year-old Sucil Orozco, who aspires to be an FSY counselor and a missionary. “They not only change their lives but also their physical appearance. They stop harming their bodies. They want to feel comfortable in the presence of our Savior. 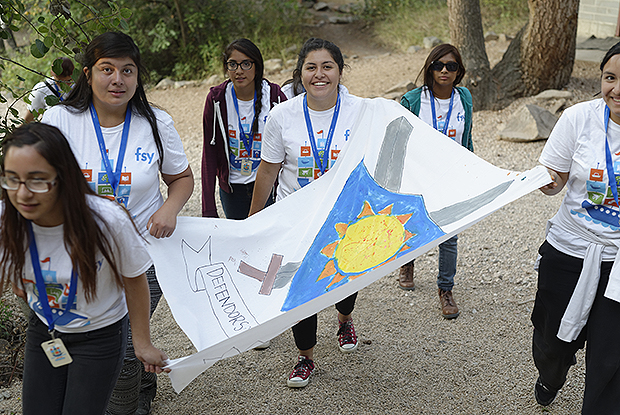 Young women make a flag during a FSY conference activity.

“My testimony is strengthened when I remember them,” she said, adding “FSY is knowing you are not the only one going through this. You are not alone.”

Adlih Orozco, age 16, met a girl whose mother had just died. Seeing how her friend was uplifted through the week’s events left a strong impression on her.

“FSY is an experience that will mark your lives,” she said. “Your questions will be answered; your pains and struggles will be alleviated. The counselors prepare and pray for you. This program will help you feel the Savior’s love.”

Morris, 22, had an equally powerful experience as an FSY counselor.

Against his families’ wishes, the semi-professional rugby player and University of Auckland graduate joined the Church three years ago. He has twice served as an FSY counselor in New Zealand and will soon be a full-time missionary in the Philippines.

The life of a counselor involves waking up early, ministering to the youth all day through activities, prayer, and example before retiring to bed at a late hour. His “life-changing” experience has been excellent preparation for his mission, he said. 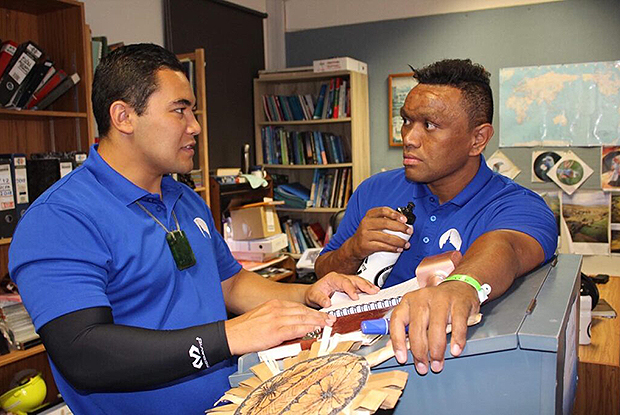 “It’s an awesome experience, the best five days of my life,” Morris said. “FSY has helped me to know this is truly Christ’s Church.”

Randy Hernandez joined the Church at age 13, and after a period of not being active in the church, his bishop invited him to attend an FSY conference. The experience set him back on the right course, and he went on to serve a mission in Mexico. After Hernandez returned, he became an FSY counselor and later married a young woman who had also served as an FSY counselor.

He said he has found joy in sharing his spiritual journey with young people and seeing them develop strong testimonies.

“It is so sublime to see how Heavenly Father works in our lives and how we can help other people to get closer to the Lord,” Hernandez said. “We invite every young person who has returned from a mission to be an instrument in the hands of the Lord in helping the future of the church as young people are being attacked on every side. We can help them get closer to the Lord.” 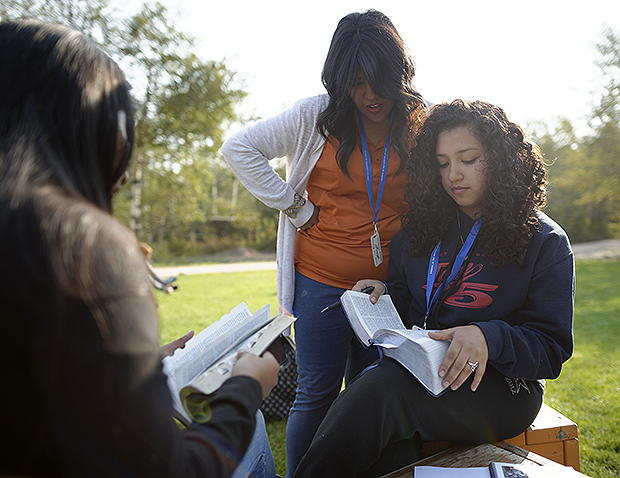 Young women study scriptures together during an FSY conference activity.