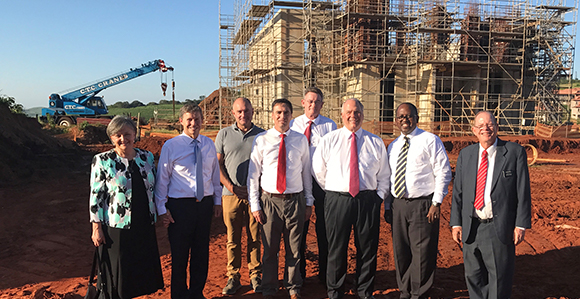 Elder Ronald A. Rasband, center, and other Church leaders stand outside the construction site of the future Durban South Africa Temple.

“I told them they cannot foretell the future impact of their membership in the Church. Part of the life they are living now is for their posterity; they are not living just for themselves.” —Elder Ronald A. Rasband of the Quorum of the Twelve Apostles

Elder Ronald A. Rasband of the Quorum of the Twelve Apostles began his recent trip to Africa by traveling to the construction site of the Durban South Africa Temple.

As he stood on the deep red soil outside the future temple, the Apostle envisioned the gospel’s unlimited and divinely guided potential across the vast African continent.

“The Lord is preparing the African people to receive all of His blessings,” he told the Church News.

The Church is indeed enjoying a dynamic moment in Africa. Three temples are in operation on the continent—in Johannesburg, South Africa; Accra, Ghana; and in Aba, Nigeria—and five more are being built or have been announced in Abidjan, Ivory Coast; Nairobi, Kenya; Kinshasa, Democratic Republic of the Congo; Harare, Zimbabwe; and in Durban.

This historic period of temple building across Africa, Elder Rasband said, “enlightened me on my journey to make the Savior and the temple the centerpieces of my messages and teachings.”

Elder Rasband’s May 18–29 trip to the Africa Southeast Area included visits with thousands of members and missionaries in South Africa and the Democratic Republic of the Congo. He presided over a variety of priesthood leadership conferences, missionary meetings, special stake conferences, and young adult devotionals.

Each event offered the Church leader opportunities to shake many hands, answer questions, offer timely counsel, and testify of Christ and the love of His prophet, President Thomas S. Monson.

“[The African] members and missionaries were thrilled to have a member of the Quorum of the Twelve Apostles with them in meetings and training,” wrote Elder Kevin S. Hamilton, General Authority Seventy who presides over the Africa Southeast Area, in an email to the Church News.

“They were deeply touched to feel of his love and testimony. Elder Rasband taught with power and ‘as one having authority.’ The impact of his visit to the Africa Southeast Area will be felt for years, even generations to come.” 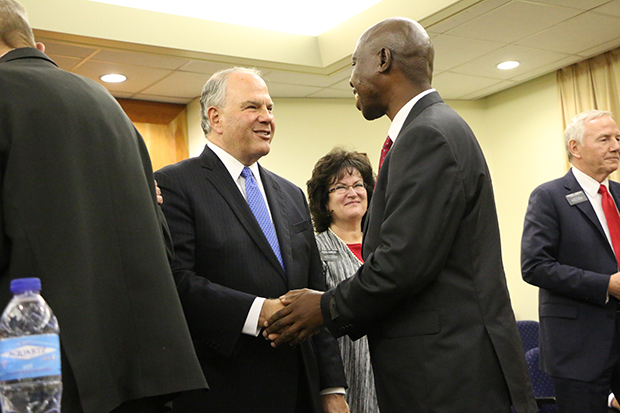 Elder Ronald A. Rasband shakes a young man’s hand during one of the many gatherings he presided over during his visit to the Africa Southeast Area.

A continent of many temples

This ongoing period of temple building is evidence of the Lord’s love for His children in Africa, taught Elder Rasband. In the coming years, the African Latter-day Saints will enjoy unprecedented access to dedicated houses of God. Legions of families will become forever families. They will enjoy the blessings of the gospel in full.

Future temples also bring new levels of responsibility. Elder Rasband encouraged the members to mark this season of temple building by deepening their own dedication to the Lord.

First, he offered counsel to those who have never been to the temple: Start by becoming worthy to enter the temple. Work closely with your bishop and other priesthood leaders. Look to that special day when you can be sealed to your family.

Next, for those who have been to the temple but are without a current temple recommend: Prayerfully prepare to return to the temple. Work closely with your leaders. Commit to make changes in your life that will allow you to again experience the joy of worshipping in the temple.

And finally, for those with a current temple recommend: Evaluate your own life. Attend the temple as often as your circumstances allow.

Sisters in Durban greet each other as they gathered to hear Elder Ronald A. Rasband during his visit to the Africa Southeast Area.

The Church has enjoyed a presence in South Africa for over 160 years. It’s the home of Africa’s first temple—the Johannesburg South Africa Temple, dedicated in 1985 by President Gordon B. Hinckley.

But the Democratic Republic of the Congo is still writing its maiden chapters of Church history. Most of the members there are converts. Many know the sting of persecution. They are the Mormon pioneers of their homeland.

In his gatherings with the Congolese members and missionaries, Elder Rasband spoke of his own pioneer ancestors, who joined the Church generations ago in Denmark and England. Many were poor and struggled to survive. They would have never imagined that one day one of their descendants would serve in the Quorum of the Twelve Apostles.

Now the Congolese members have the essential opportunity to live the commandments and become multigenerational families.

“I told them they cannot foretell the future impact of their membership in the Church,” said Elder Rasband. “Part of the life they are living now is for their posterity. They are not living just for themselves.”

Elder Rasband was both humbled and inspired by the devotion of the African members. At the May 28 multistake gathering in the DR Congo city of Lubumbashi, for example, nearly 5,000 people squeezed into the stake center and adjoining tents to listen to Elder Rasband and the other Brethren.

“The people were so hungry to hear the words of the leaders of the Church and to hear testimonies borne of Jesus Christ,” he said.

“He told them that if President Monson were here, he would say at least two things: First, I love you. And second, thank you for your service and faithfulness. The members were deeply touched to know that the prophet was aware of them and concerned for their well being.”

A large crowd of members in Likasi gather to hear Elder Ronald A. Rasband speak during his trip to the Africa Southeast Area.

“Fellowcitizens with the saints”

Elder Rasband’s travels also offered him and the other General Authorities opportunities to hear the concerns and queries of the African members.

At a young adult devotional in Lubumbashi a question was raised about the ongoing practice of dowries, or “bride price,” where a prospective groom pays a price to the bride’s family in order to take their daughter in marriage. This has become a significant barrier to marriage for many young Latter-day Saints in the region.

“The First Presidency and the Twelve have asked the African Saints to keep any traditions that are good and that strengthen the family but to abandon traditions that impede the formation of families, such as bride price,” wrote Elder Hamilton.

Prior to the multistake conference in Lubumbashi, Elder Rasband felt prompted to invite a young single woman named Anastasia, who had attended the earlier young adult devotional, to share her testimony. Without prompting or direction, Anastasia bore her testimony about the importance of eternal marriage and the need to abandon bride price.

“We are not merchandise,” she declared to parents and other relatives.

Elder Rasband remembers a hush settling across the congregation.

“She bridged a subject that is so sensitive,” he said. “I could not be more proud of her. … That was the most powerful address of my 10-day journey.”

In like manner, Latter-day Saints across the globe have, perhaps, their own traditions, practices, or habits that may need to be abandoned to enjoy the full blessings of Christ’s gospel, he added.

He repeated the words that the Apostle Paul once taught a diverse audience:

“Now therefore ye are no more strangers and foreigners, but fellowcitizens with the saints, and of the household of God;

“And are built upon the foundation of the apostles and prophets, Jesus Christ himself being the chief corner stone” (Ephesians 2:19–20).

A growing number of temples—coupled with devout, Christ-centered members, such as Anastasia and many others—are evidence of promising days ahead in Africa, observed Elder Rasband.

“The Lord loves the African people, and He has expectations for them to claim their promised blessings.” 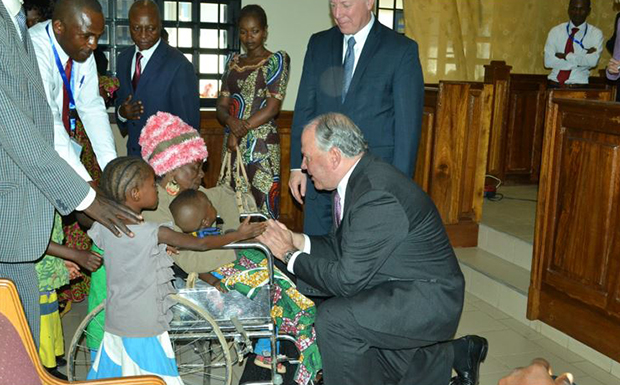 Elder Ronald A. Rasband greets a woman and her family at a member meeting in Likasi, Democratic Republic of the Congo. The Church leader shook thousands of hands during his trip to the Africa Southeast Area.

Elder Ronald A. Rasband poses with priesthood leaders in Lubumbashi during his recent visit to the Africa Southeast Area. 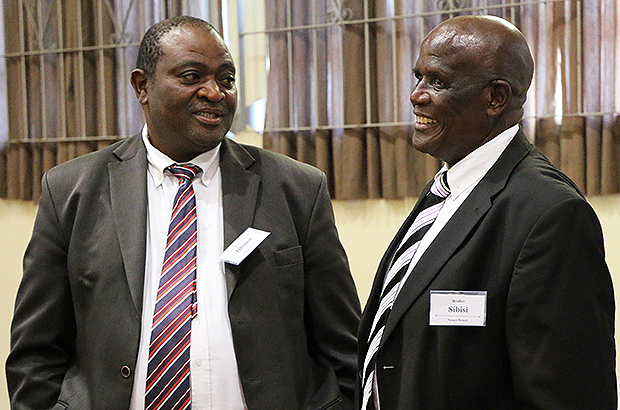 Local priesthood leaders gather to hear Elder Ronald A. Rasband during his trip to the Africa Southeast Area.