Elder Rasband Testifies to the Faithful in West Africa 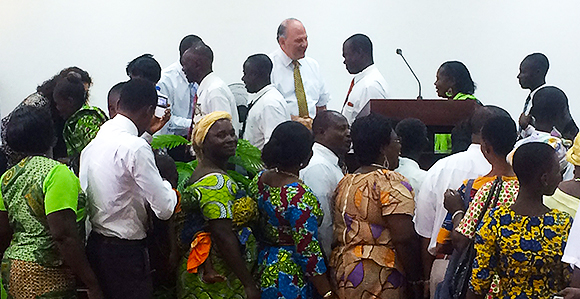 Members in the Takoradi Ghana Stake line up to shake hands with Elder Ronald A. Rasband on March 19 after the Saturday evening session of their stake conference.

“The members were thirsty for the word of the Lord. They were thirsty and hungry for one of the leaders of the Church to come and tell them that they are loved and appreciated.” —Elder Ronald A. Rasband of the Quorum of the Twelve Apostles

Elder Ronald A. Rasband took spiritual nourishment to Latter-day Saints in the West African nations of Nigeria and Ghana as he fulfilled an assignment March 10–21 to a part of the world where many of the gospel’s pioneers are spoken of in the present tense.

Elder Rasband joined a few of the Apostles who have been able to visit the Aba Nigeria Temple site since President Gordon B. Hinckley dedicated the temple on August 7, 2005.

“The members were thirsty for the word of the Lord. They were thirsty and hungry for one of the leaders of the Church to come and tell them that they are loved and appreciated,” Elder Rasband said. 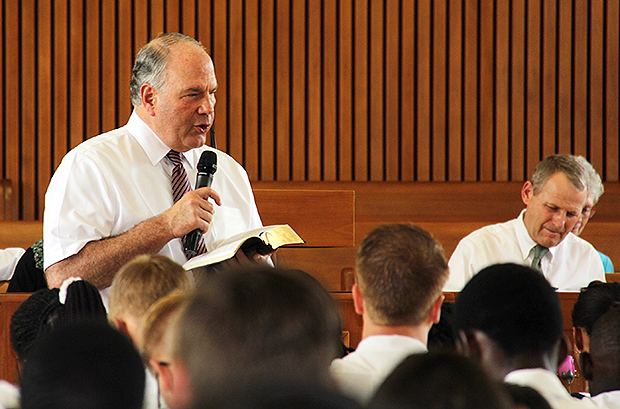 Elder Ronald A. Rasband of the Quorum of the Twelve Apostles gives counsel to missionaries serving in the Ghana Accra and Ghana Accra West Missions on March 14, 2016. 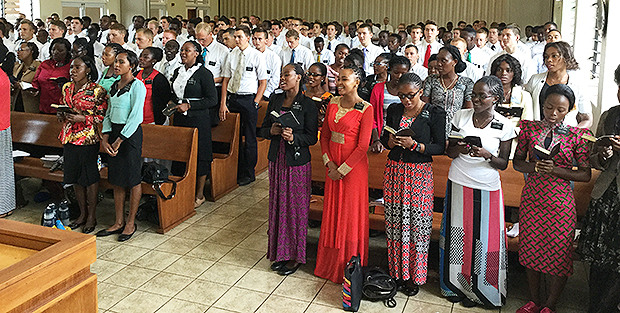 Missionaries from the Ghana Accra and Ghana Accra West Missions attend a meeting over which Elder Ronald A. Rasband presided on March 14, 2016.

In Nigeria Elder Rasband addressed members in a combined conference for the three stakes in Aba on March 13. The conference was held in the stake center on the grounds of the Aba Nigeria Temple complex.

“The members filled the stake center and a tent outside with closed circuit TV. There were as many members outside as there were inside,” Elder Curtis said. “Elder Rasband went to the conference early; people were there an hour ahead of the meeting. Elder Rasband shook hands and talked to the people. There was a great feeling of love that went both ways—from Elder Rasband to the people and from the people to Elder Rasband.

“It rained very hard that day, yet people came in great numbers to receive the blessing of having a member of the Quorum of the Twelve Apostles come and spend time with them.”

Elder Curtis said, “They are a remarkably faithful people. We have a hard time scheduling all the visits to the temple that the members throughout Nigeria wish to make.” 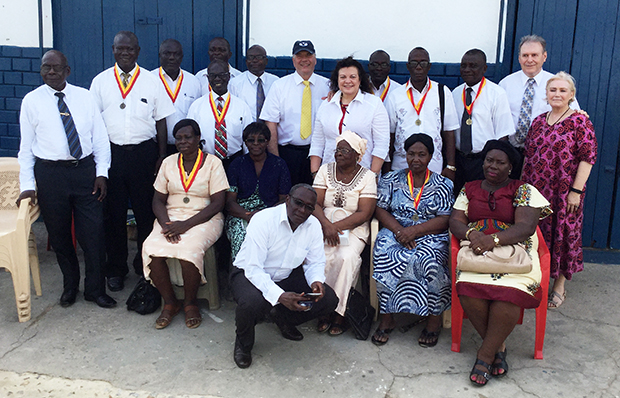 Elder Ronald A. Rasband of the Quorum of the Twelve Apostles and Sister Melanie T. Rasband, standing at center, and Elder Terence Vinson of the Seventy and Sister Kay Vinson, at right, meet with a group of pioneer members in Cape Coast, Ghana, on March 17, 2016.

Elder Rasband said after traveling the roads to the temple he regarded the site as an oasis. “It’s just beautiful. We walked through the temple and then met with missionaries serving in the Nigeria Port Harcourt Mission in the stake center on the grounds of the temple complex.”

Sister Melanie T. Rasband, right, Sister Tamara Vinson, and Sister Kay Vinson (far left) pose for a photo with women who are among early converts to the Church in Ghana.

On March 14, they held a devotional in the Ghana Missionary Training Center and then, in the stake center on the Accra temple complex, met with missionaries serving in the Ghana Accra and Ghana Accra West Missions. Elder Rasband presided over the Africa West Area Interim Mission Presidents’ Seminar March 15–16. They also met with Accra Ghana Temple workers and attended a temple session.

The branch members were taught the gospel by William “Billy” Johnson before he was baptized. In the early 1960s, having received some literature about the Church, he wrote to Church headquarters requesting more information and asking for missionaries to be sent to Ghana. Then-Church President David O. McKay wrote back, saying “in the Lord’s own due time, missionaries would be sent.” Brother Johnson studied the Book of Mormon and the LDS publications he had received. He began preaching the gospel, even holding meetings before missionaries arrived in Ghana in late 1978. After he was baptized that year, he taught the people whom he had unofficially baptized that they needed to have the ordinance performed by those holding priesthood authority, which had then become available to all worthy males in the Church. 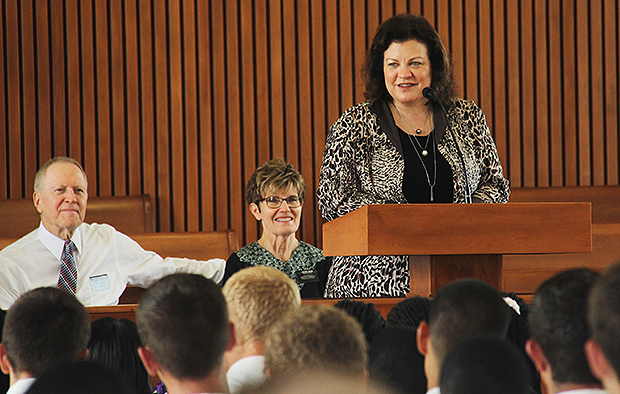 Sister Melanie T. Rasband speaks during a meeting of missionaries serving in the Ghana Accra and Ghana Accra West Missions on March 14, 2016.

“We could see how happy they are,” Elder Rasband said. “That was a priceless experience, to meet with those early Ghanaian Saints who began this whole wonderful expansion of the Church in Ghana.”

On March 20, Elder Rasband and Elder Vinson divided the Takoradi Ghana Stake to create the Mpintsin Ghana Stake. On the day before, they interviewed 30 leaders in preparation to calling one as the new stake president.

“I asked them a question I typically ask: ‘Do you love your wife?’ Time after time, they would look at me and say, ‘Well, I love her, yes.’ Then I asked, ‘Do you tell her you love her?’ And they would say, ‘Well, we don’t really do that here in Ghana. We’re not a verbally loving people.’ And I would respond, ‘Will you let me teach you part of Latter-day Saint culture?’”

Elder Rasband taught for spouses to say “I love you” to reinforce the daily kindness that stems from love.

“In the adult session of stake conference I said from the pulpit, ‘Brethren and sisters, I don’t know you that well, but I can tell you that I love you.’ I told them that President Thomas S. Monson wanted them to know he loves them. I quoted John 15:12, ‘That ye love one another as I have loved you.’ Afterward, every time I shook a hand or spoke to the members, they would say something like, ‘Elder Rasband, I love you,’ or ‘Dear Apostle, I love you.’ We deemed it the ‘I love you conference.’” 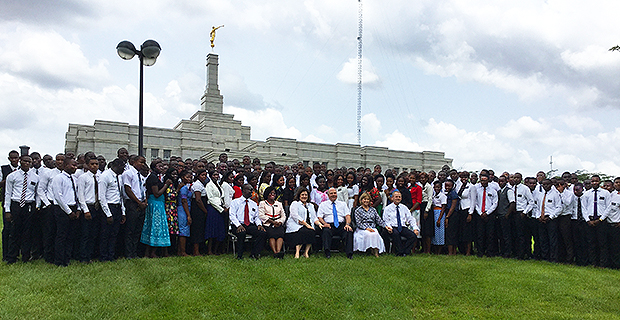 While the Brethren were meeting with priesthood leaders, Sister Rasband and Sister Vinson met with some of the women pioneers in the area. “We heard about their dreams and finding the Church and their faith. Throughout so much of the trip there was this amazing feeling of these valiant Saints who were very happy [and who] love the Lord, the Church, and the gospel—and they are willing to defend it and live by it.

“We learned that the whole area of West Africa is a very church-going people. … I was on the verge of tears everywhere we went. I was amazed at their gratitude, love, and humility. They were beautiful. … They came to meetings beautifully groomed with the brightest smiles.”

Sister Rasband said the youth in Ghana performed a program of dance and music. “They performed with joy and gladness, holding on to their culture.” 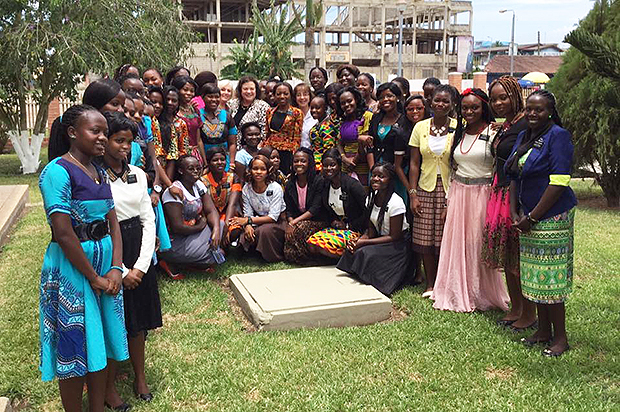 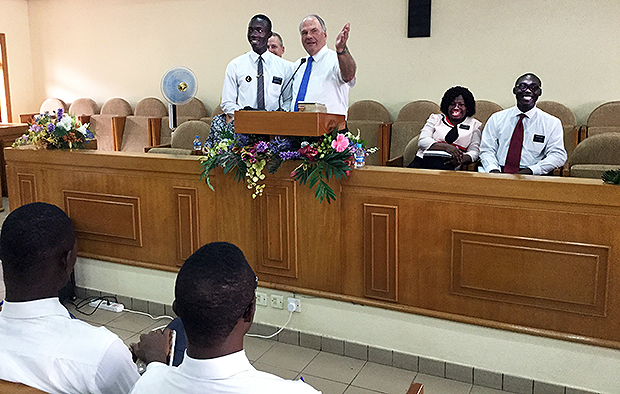 Elder Ronald A. Rasband speaks to missionaries in the Nigeria Port Harcourt Mission on March 12, 2016. 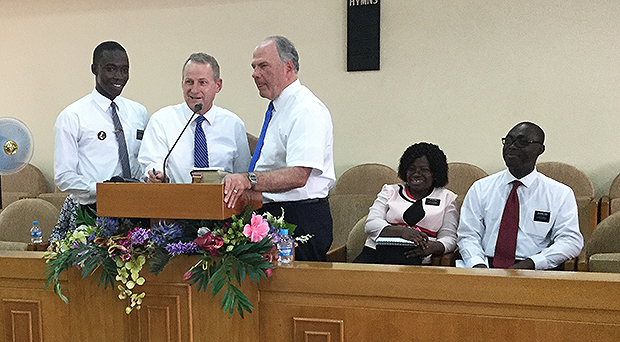