Construction Begins for a New Temple in Africa 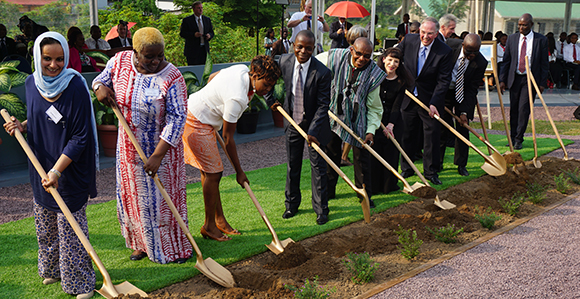 Elder Neil L. Andersen of the Quorum of the Twelve Apostles; his wife, Sister Kathy Andersen; and local Church and community leaders break ground for the Kinshasa Democratic Republic of the Congo Temple.

“We humbly declare, however, without apology, that power and priesthood and keys of authority have been restored to earth and will be exercised in the Holy House of the Lord.” —Elder Neil L. Andersen of the Quorum of the Twelve Apostles

“They trust in God and they pray to God. Our Heavenly Father loves His sons and daughters here, and answers their prayers.”

“Today is a sacred day, a holy day, a day that will long be remembered in the records kept in heaven and by the saints of God here in the Democratic Republic of Congo,” said Elder Andersen.

Announced by President Thomas S. Monson during the October 2011 general conference, the Kinshasa Democratic Republic of Congo Temple will be the first temple in the country and when complete, will serve more than 42,000 Church members living in the country. Africa now has three dedicated temples and three more temples announced.

Thirty years after the Church received legal status and missionaries first entered the country, there are more than 42,00 Church members living in the Democratic Republic of Congo. Church members from 145 congregations now attend the Johannesburg South Africa Temple located approximately 2,100 miles away.

“The building of this temple means that the restored kingdom of God will be established here in Kinshasa and throughout the Democratic Republic of Congo until the Savior returns to the earth, and that there will be a covenant people here to receive Him when He returns,” Elder Andersen said. “This holy house will also bless the country and people who surround it whether or not they are members of the Church. It will be a light upon a hill, and the glory of the Lord will be upon it.”

An artist’s rendering of Kinshasa Democratic Republic of Congo Temple.

Elder Andersen—speaking in French—shared written testimonies of three generations of a family. First, the Apostle shared the words of Brother Antoine Kasuangi Mutombo, who was baptized on June 22, 1986, after he had a dream about a beautiful, clean house—a temple—as he was meeting with missionaries.

Then, Elder Andersen shared the words of Brother Mutombo’s son, President Thierry Kasuangi Mutombo, who serves as president of the Kinshasa Democratic Republic of the Congo Masina Stake. He spoke of hearing about the temple during family home evening lessons when he was a child. Since then, he decided he would never lose sight of the temple and wanted to be worthy to enter.

Elder Andersen then shared the words of President Mutombo’s son, Jason Kalombo Mutombo, who spoke of his love of the temple—the Lord’s House—where his family was sealed for all eternity. 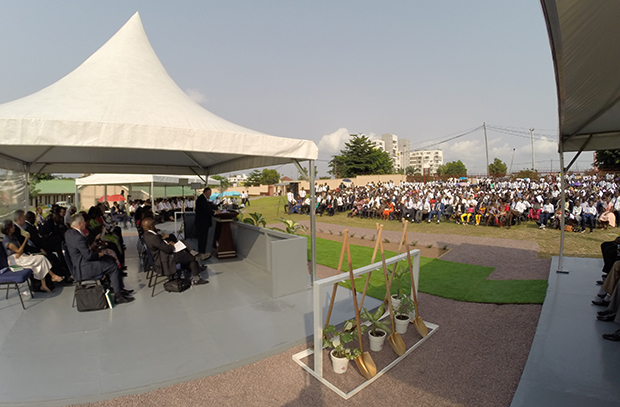 Latter-day Saints and members of the community participate in the groundbreaking of the Kinshasa Democratic Republic of the Congo Temple on Friday, February 12, 2016.

“The building of a temple is a testimony to the immortality of the soul,” Elder Andersen said. “God, our Eternal Father, lives, and He has a plan to bless His sons and daughters of all generations.”

Crucial to that plan is His Beloved Son, Jesus Christ, and His atoning sacrifice, crucifixion, and resurrection, the Apostle taught.

“Life beyond the grave is as certain as the sun rising each day in Kinshasa,” Elder Andersen said. “As we believe in Him and are faithful to His teachings, we will live eternally in the Celestial Kingdom.”

Recognizing the many good people, faithful husbands and wives, and devoted Christians in many religious denominations in the area, Elder Andersen acknowledged the respect he has for “good and virtuous people of the world wherever they are, and we acknowledge that there is much we can learn from them.” 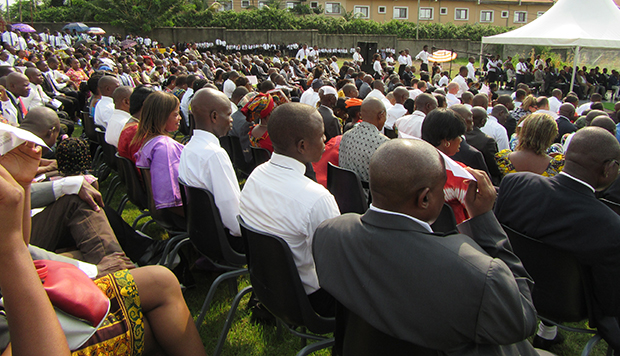 Latter-day Saints and members of the community participate in the groundbreaking of the Kinshasa Democratic Republic of the Congo Temple on Friday, February 12, 2016.

Building on that statement Elder Andersen said, “We humbly declare, however, without apology that power and priesthood and keys of authority have been restored to earth and will be exercised in the Holy House of the Lord.“

Recognizing that in the next two years people in the area will watch the construction of the temple, Elder Andersen spoke of the important process. 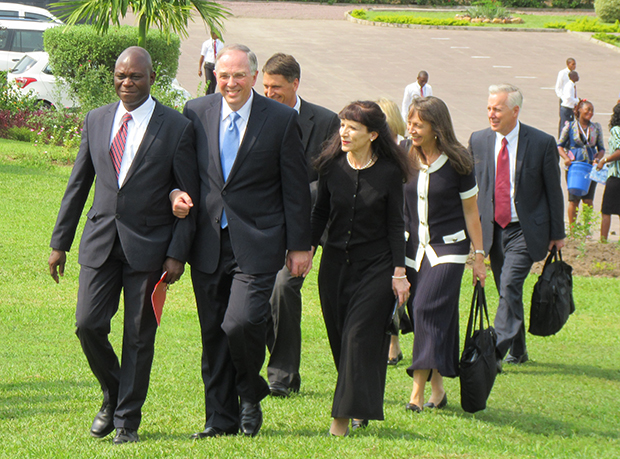 Elder Neil L. Andersen of the Quorum of the Twelve Apostles of and his wife, Sister Kathy Andersen, are escorted to the site of the groundbreaking ceremony of the Kinshasa Democratic Republic of Congo Temple.

“Only the best of materials will be used,” he said. “The best of the woods, metals, glass, and fabrics will come from around the country and the world to adorn the House of the Lord. Craftsmen will not be hurried, because if their work is not the very best, they will be asked to begin again. We will ask for near perfection in materials and labor.”

Just as the temple will be carefully built, Elder Andersen encouraged listeners to let the building of the temple be a pattern for their lives. As members devote themselves during the months of construction to the better shaping of their character, they will be ready to enter the dedicated temple at its completion.

“Let us be better husbands and wives, better children; let us be more true to following the Savior,” he said.

It is through following the Savior’s example—keeping His commandments, paying an honest tithe and offerings, being kind and generous, and praying with humility and real intent—that people will be worthy to enter the temple.

“As we do our best, and as those building this beautiful temple do their very best, we will meet again in a few months, prepared and worthy in every way to enter the House of the Lord.”

Elder Andersen concluded his remarks with a prayer, and then joined with other leaders of the Church and the community for the ceremonial shovel turn, as they broke ground to officially begin the construction process of the temple.