Decision for New MTC in Mexico Is “Fortunate” 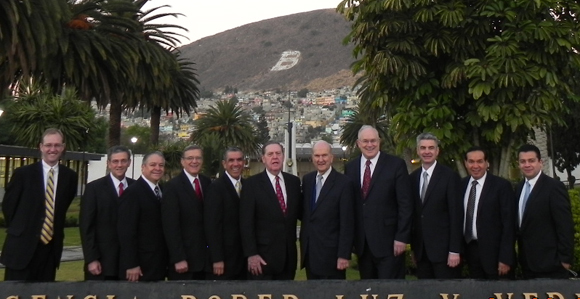 “We are witnessing a historic day in the Church. … Thousands of young people will come here from many nations.” —Elder Russell M. Nelson of the Quorum of the Twelve

On January 29, an announcement was made that the Church-owned high school Benemérito de las Américas in Mexico City would be converted into a missionary training center. A day later, Elder Russell M. Nelson of the Quorum of the Twelve Apostles pulled out a copy of the Doctrine and Covenants and read section 88:73: “Behold, I will hasten my work in its time.”

That prophesied hastening, he said, “is what we are seeing in an unprecedented way.” He pointed to a graph on his desk reflecting the surge of missionary applications in recent months following President Thomas S. Monson’s historic announcement that changed the age at which young men and young women may begin missionary service.

Elder Nelson and his colleague in the Twelve, Elder Jeffrey R. Holland, presided and spoke at the January 29 meetings at the Benemérito campus where the plans for the future MTC were announced. The change from school to MTC is expected to occur following the end of the Benemérito school year in June 2013. The new training center will accommodate newly called missionaries to Mexico and to other Spanish-speaking assignments throughout the world.

The Church’s decision to convert the school into an MTC “comes at a very fortunate time as the influx of new missionaries will exceed our capacity at existing missionary training centers,” said Elder Nelson in a Church News interview.

The new MTC will train elders, sisters, and couples who will serve not only in Mexico, but in other countries of North, Central, and South America. Even missionaries from the United States who have been called to Spanish-speaking assignments in their own country may possibly be trained in Mexico City. The MTC in Provo, Utah, will continue to provide Spanish-language training for many missionaries.

The first group of new missionaries will likely report to the new MTC in July. It’s expected that some 150 missionaries will make up the MTC’s maiden “class,” followed by gradual increases in numbers. The capacity of the new MTC may exceed 1,500. For more than four decades, the Benemérito de las Américas facility has functioned as a boarding school—so dormitories and other needed infrastructure are already in place.

Elder Nelson said he and his fellow leaders are grateful for how news of the change was received by the Mexican members—including the Benemérito administrators, faculty, staff, and students. He also praised the “vital participation” of a variety of leaders, including the Mexico Area Presidency—Elder Daniel L. Johnson, Elder Benjamín De Hoyos, and Elder Jose L. Alonso—along with Elder Paul V. Johnson, the Commissioner of Church Education, and Elder David F. Evans, Executive Director of the Missionary Department. He also noted the work of Bishop Gérald Caussé, First Counselor in the Presiding Bishopric; Elder Carl B. Pratt, an emeritus Seventy and president of the Mexico Missionary Training Center; Chad H. Webb, assistant commissioner of Church Education; and Kelend I. Mills, director of international missionary training centers.

“We are witnessing a historic day in the Church,” said Elder Nelson in the January 29 meeting at the Benemérito campus attended by local Church leaders and school administrators. Proceedings were also transmitted by satellite to other chapels throughout Mexico. A remarkable number of young people are answering calls to serve, he added, requiring the additional missionary training center. The future MTC will prepare many of those new missionaries. “Thousands of young people will come here from many nations,” he said. In a subsequent meeting with the Benemérito students, Elder Holland acknowledged the students’ love for the storied Benemérito de las Américas. He assured the young people it was appropriate for them to feel bittersweet about the closing of their beloved school. He also spoke of the tremendous opportunities for Church growth that will be associated with the recent surge of missionaries and the new MTC in Mexico City. “We will see growth,” added Elder Daniel L. Johnson, “like never seen before in the history of the Church.”