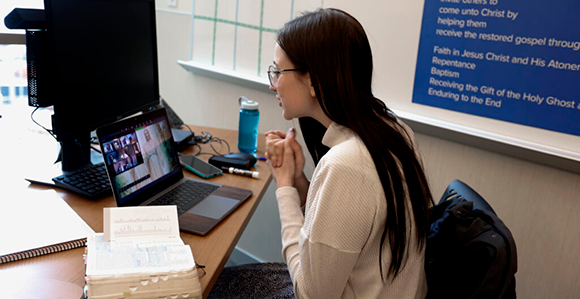 “I hope everyone, in the middle of all this, doesn’t miss the historic experience this is for these young men and young women who were the ones who made it through the pandemic.” —Elder Brent H. Nielson of the Seventy

No full-time missionaries of The Church of Jesus Christ of Latter-day Saints have tested positive for COVID-19, and some 50 percent of the global missionary force of 67,000 are being impacted by returning home for reassignment or release in the Church’s adjustments to missionary service due to the coronavirus pandemic.

Meanwhile, the Church’s Missionary Department is seeing a reshaping of mission work as elders and sisters are reaching out, teaching, and being trained in new ways.

“The adventure of a lifetime” is the label used by Elder Brent H. Nielson, a General Authority Seventy who is executive director of the Missionary Department. That phrase aptly describes not only the recent impacts to individual missionaries but also the ever-updating adjustments the Church and its Missionary Department are making.

In his mind, the attention given to adjustments can cause missionaries, their families, Church members, and even Missionary Department personnel to overlook what has become a unique missionary experience.

“This is an adventure of a lifetime,” he said. “Our missionaries will be ones who say, ‘I was a missionary during the coronavirus pandemic. I served in the Philippines for a while, and we flew out, and I served in Nebraska—it was a different day and a different time, and we were those missionaries.’”

With emotion, he continued: “When I see their pictures on the planes, they are today’s ‘army of Helaman’—they are very impressive. I hope everyone, in the middle of all this, doesn’t miss the historic experience this is for these young men and young women who were the ones who made it through the pandemic.”

Added David N. Weidman, the Missionary Department’s managing director, of the elders and sisters in self-isolation, awaiting reassignment in their home country: “How many missionaries will be able to say, ‘I was assigned to serve two weeks in my home’? They’re not home as a released missionary—that call stays with them.”

The two joined the Church News in a videoconference interview to offer information, insights, and anecdotes from the recent adjustments to missionary service.

First, “safety is the number-one concern we have with missionaries, but very close behind that is continuing to help the gathering of Israel,” he said. “The Brethren, when they weigh decisions, weigh both of these, and their decisions are based on those twin priorities.”

The third thing to know is “gratitude on our part for their patience,” he said. Missionaries will need patience with timing on reassignments, new calls, and training information.

No positive tests: To date, no missionary or mission leader has yet tested positive for COVID-19.

A few missionaries have shown similar flu-like symptoms, prompting the worry they have the virus, Elder Nielson said. For those tested, the results were negative.

Affecting 50 percent: The returning home of nonnative missionaries to home countries for self-isolation and either reassignment or release due to adjusted tenure lengths or health concerns is affecting about 50 percent of the Church’s missionaries, Weidman said.

“I’ve just been totally amazed at how awesome our missionaries are,” he said of the constant and ongoing global movement of missionaries that started in Asia last month.

He cited an example shown on social media—missionaries on a recent chartered flight returning to their home countries from serving in the Philippines, with one elder suggesting a preflight prayer to be said.

“They continue to be focused and committed,” Weidman said. “When they come home, they stay strong during their time at home.” 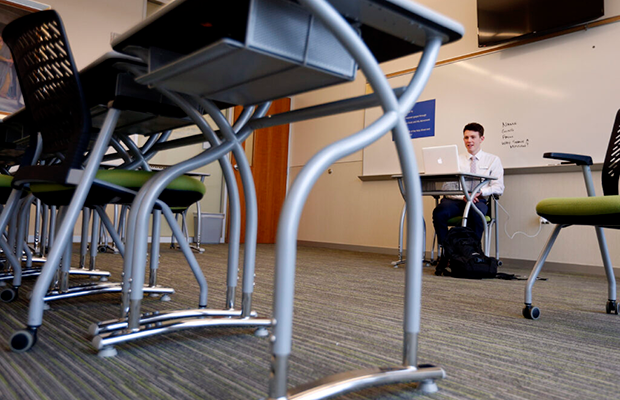 Returning home: Nonnative missionaries are returning from missions in many Church areas. For missionaries in some locations, it is better for them to stay in place.

“We don’t know what the future will bring. Eventually, maybe they will need to come home, or after this passes they will continue doing what they’re doing in their mission,” said Elder Nielson. The Church is constantly consulting with security, local experts, and others for counsel.

“Our top concern is always the safety of our missionaries, and we analyze that in each situation—where will they be the safest, and what can we do to continue to maintain that safety?”

And missionaries waiting at home can still have impacts, he added. “We get reports all the time—like a young elder who just came back with the big group from the Philippines, and his parents aren’t members. They were there to pick him up at the airport, and they expressed gratitude to the Church for taking such good care of him.”

International movement: While missionaries returning home to the United States and Canada have received more attention because of the masses, the adjustments are affecting equally those missionaries serving in North America or those crossing borders on other continents in returning to their home countries.

International and domestic travel cancellations and bans prove to be of great concern, Elder Nielson said. “That’s our biggest challenge. We are concerned about that every day.”

Elder Nielson said all mission presidents and their companions have been asked to stay in place.

“They’re staying in their homes,” he said. “We look at each of them individually.”

Training through technology: While the Church’s 10 missionary training centers are closing for hosting and on-location training of new missionaries, training continues online with the new missionaries at home by MTC instructors from across the world.

The videoconference training has new missionaries assigned to zones, districts, and companionships, working with teachers for six to eight hours a day. They listen to devotionals, work in small groups, split off into companionships for role playing—much like more traditional training at the MTCs but done in a virtual way.

“There’s really no difference in the type of things that are going on than what had happened face to face, except they’re not face to face,” Weidman said.

Language training is an example where an instructor may be able—through technology—to help a missionary based on individual needs rather than group needs, and both say the virtual training may change the ways missionaries both work and are trained.

“Consecrated” reactions: Weidman said Missionary Department leaders have been impressed by “the amount of consecration there in the body of the Church—the number of people who have reached out to each of us or to the Church collective as an organization and made consecrated offering to help out. It is just really overwhelming to me to see that outpouring.”

Those offerings range from small acts, such as in his own neighborhood, where a missionary returning from Africa is in self-isolation. “People in our ward are organizing daily drive-bys,” he said. “People will drive by the home, stand outside their car, and just wave to this good elder and say hello while he’s under quarantine.”

And it extends to larger acts, he added, “where people as families and individuals are making substantial financial offerings to help during this time.”

The ongoing worldwide movement of missionaries returning home and adjustments of being reassigned or released impacts mission numbers in both the short and long terms, which in turn affects the calling and assigning of new missionaries—during the COVID-19-adjustments period as well as anticipating for its conclusion.

Elder Nielson said he sees benefits to missionary work coming from missionaries facing restricted public interactions. One is they're learning how to work, serve, and teach from their own residences.

“In many areas, our missionaries are teaching with mobile devices just as many or more people than when they were going out into their homes,” he said of missions across the United States and elsewhere.

That contradicts the thought that missionary work comes to a grinding halt when the missionaries are sheltered in their apartments.

“They are actually doing missionary work in new ways that we hadn’t thought of,” he said. “It’s like this event is going to force us to learn how to use the technology that everyone has.

“We have always wanted to do that, but our missionaries have felt the obligation to be out on the street stopping people and knocking on doors, and now we are learning there is actually a different way to do this.”

Weidman said he has spoken recently with several mission presidents in Japan, where missionaries there have been on very restricted activity for some four weeks. “Those presidents are talking about their missionaries in some cases teaching more, ministering to more members through technology. They’re finding new and different ways of staying on purpose.”

The teaching with technology and the more frequent communication with family at home—which are at a premium now with the COVID-19 pandemic—comes on the heels of First Presidency approval earlier this year for mobile devices to all missions worldwide.

“That was all approved before we even knew about the virus coming,” said Elder Nielson, adding that the rollout of that effort is still continuing in some missions.

“Whatever Comes Our Way”

Elder Nielson said he has felt reminded that life is full of trials and challenges. “We have been in a society so far where everything has been almost perfect—and this experience isn’t perfect. It’s causing us to stretch and reach down inside and do things we didn’t plan on doing before, and we need to be prepared to do whatever comes our way.

“I want everybody to know everyone is doing the best they can in uncertain circumstances, and we all really should be patient as members of the Church of Jesus Christ.”

Even in an “adventure of a lifetime,” when traditional missionary experiences and norms are being adjusted, he added.

“I think it’s going to be an amazing experience, when it is all said and done and when history is written.” 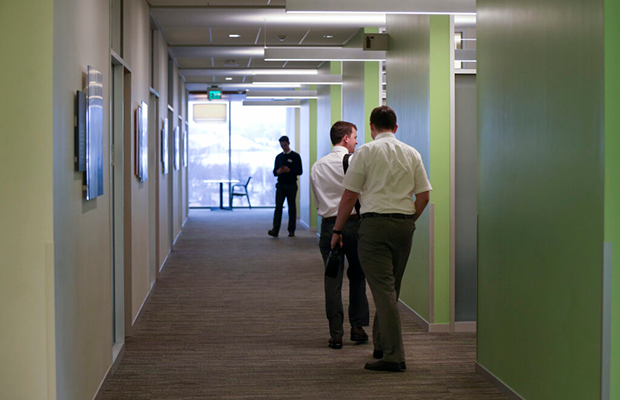 A limited number of training missionaries, instructors, and staff are left to walk the hallways of the Provo Missionary Training Center on Wednesday, March 25, 2020. Photo by Laura Seitz, Deseret News.