Church Recalling Many Missionaries to Home Countries, MTCs to Not Receive New Missionaries

“Once this passes, we look forward to finding great opportunities to missionary work throughout the world.” —Elder Brent H. Nielson, General Authority Seventy

Substantial numbers of full-time missionaries serving in nations other than their own will likely be returning to their home countries, and missionary training centers worldwide will not be receiving new missionaries, the First Presidency and Quorum of the Twelve Apostles announced Friday afternoon.

The March 20 letter from senior leaders of The Church of Jesus Christ of Latter-day Saints detailed these and other adjustments to missionary service due to ongoing global health concerns.

“We take very seriously the health and safety of our missionaries and of those they teach,” the letter stated. “The rapidly developing travel advisories and restrictions that are emerging around the world present significant logistical and other challenges.”

The First Presidency and Quorum of the Twelve Apostles outlined the following temporary adjustments:

Additional adjustments may be necessary as Church leaders continue to evaluate changing conditions.

“We love and pray for our missionaries and their families,” concluded the Brethren in the letter. “We are grateful for the continued prayers and support of parents, loved ones and Church members as we make every effort to help them remain safe and well in these challenging times.” 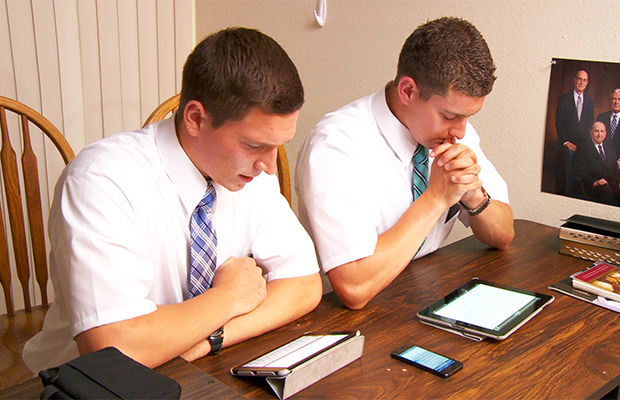 Two elders praying in their apartment with iPads.

In an earlier March 11 letter, the First Presidency and Quorum of the Twelve Apostles announced then that missionaries scheduled to enter missionary training centers in Provo, Utah, or Preston, England, were to be trained remotely by video conference.

In that letter, senior Church leaders wrote that the “temporary virtual training program will help to prepare missionaries for the field while minimizing risks related to communicable disease.

“Each missionary will receive specific information regarding the length of training, schedules, and other logistics as his or her starting date approaches. Once missionaries complete their online training, they will travel directly to their mission assignments.”

Church leaders announced in a March 16 communication that young missionary elders currently serving in missions within the United States and Canada who would complete their mission on or before September 1, 2020, may be released after they have served for 21 months. The length of service for sister missionaries serving in the United States and Canada will not be impacted by the adjustments.

Young missionaries needing to work primarily from their apartments “will continue teaching using technology, studying the scriptures and ‘Preach My Gospel,’ language learning, family history, online community service and other activities as identified by the mission president,” according to the statement.

Church leaders also noted that “missionaries are encouraged to stay in contact with their families frequently and to take opportunities to leave their apartments for periods of exercise and fresh air, while observing wise guidelines for personal contact.”

The following day, Church leaders announced nonnative missionaries serving in the Philippines were returning to their countries of residence.

The March 17 update stated: “With a new travel directive from the Philippines government and due to a general disruption to their ability to carry out their service, all missionaries who are not native to the Philippines are being moved out of that country. These missionaries will return to their home countries for new temporary assignments. They will begin their new assignments after completing a 14-day period of self-isolation at home as a precaution.

“The missionaries’ evacuation from the Pacific Islands nation—home to hundreds of thousands of Church members—was apparently being executed in compliance with a Monday, March 16, presidential proclamation [from the Philippines] directing foreign missionaries to immediately leave the country.”

Said Elder Brent H. Nielson, a General Authority Seventy and executive director of the Missionary Department who also formerly served as the president of the Philippines Area, “We are disappointed that borders across the world are closing and our missionaries have such a small window to be home.”

The good news, he added, is that in the Philippines well over 50 percent of the missionary force are Filipinos, and “they won’t miss a beat.”

“They are well trained, and they know the language, and they will keep the work going,” he said. “Once this passes, we look forward to finding great opportunities to missionary work throughout the world.”

In response to travel regulations instituted by several African governments, the Church announced missionaries serving in 26 of Africa’s 34 missions who are not native to those regions will be temporarily moved.

The March 18 update from Church leaders said missionaries from outside Africa will return home to self-isolate for 14 days before receiving new temporary assignments in their home countries based on need and capacity.

Missionaries from Africa will travel directly to their new assignments in their home countries. Any missionaries who are unable to return home due to travel restrictions will continue serving in their current mission.

Nonnative missionaries serving in the Micronesia Guam Mission on islands other than Guam will also return to their home countries, the Church announced. 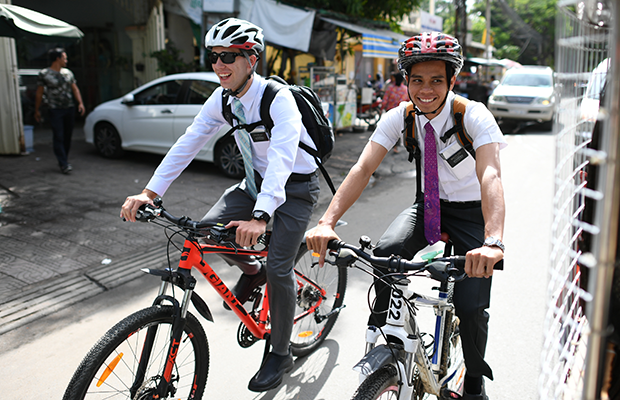