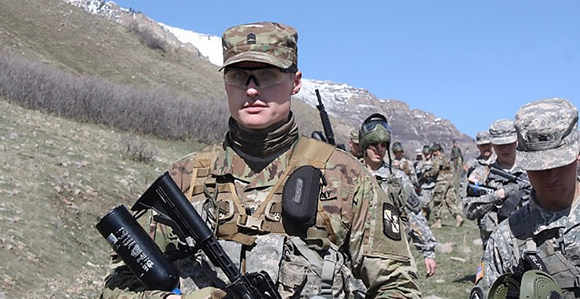 “The ‘unknown’ can be intimidating—however, I know that the Lord will never leave us comfortless.” —Aaron Cox, BYU ROTC Air Force cadet

U.S. Army Lt. Col. Forrest “Chip” Cook can quickly conjure his own short list of “life highlights”—those defining personal events that mean as much decades later as they did the moment they occurred.

Marriage, the arrival of children, or, for Latter-day Saints, receiving a full-time mission call often claim top spots on such lists.

“And for anyone that becomes a military officer, their commissioning ceremony makes that ‘top five’ of dates and times that you remember forever,” said Cook, who commands BYU’s Army ROTC cadre. “It’s a significant event in their professional careers.”

It’s been over two decades since Cook was commissioned a second lieutenant, but the memory of that day remains fresh for the West Point graduate.

Every year, several senior cadets from Brigham Young University’s Army and Air Force Reserve Officer Training Corps (ROTC) programs count down the days until their own time-honored commissioning ceremonies. It’s a photo-album moment to take an oath to defend the country, receive one’s first salute, and celebrate with family, friends, and fellow cadets.

The traditional commissioning ceremonies at the Church-owned university signal a life-altering shift from student life into military service as junior officers. But 2020 has shown little regard for tradition. BYU did not host a typical graduation ceremony at the Marriott Center—and the typically large and public commissioning ceremonies for the ROTC programs have become small and virtual.

BYU’s Army ROTC cadre commissioned its graduating cadets on April 23 in individual commissioning ceremonies. A few close family members—such as parents and spouses—attended in person, while other loved ones and friends joined in as live virtual audiences.

The BYU Air Force ROTC detachment, meanwhile, is preparing for its own series of virtual commissioning ceremonies on May 15.

The new officers are male and female and hail from a variety of states. A few are married, and some are parents. Most served full-time missions. Both the Air Force and Army ROTC groups at BYU also include future officers from Utah Valley University.

“We’ve done our best, but it has been challenging,” said U.S. Air Force Colonel Frederick Thaden, who commands the Air Force ROTC detachment at BYU. “We certainly didn’t expect this at the beginning of the semester, . . . but we’ve met all the [commissioning] requirements—and now the graduating cadets will be able to commission and continue with their Air Force careers.”

The past few months have been ventures into uncharted administrative waters for military veterans such as Lt. Col. Cook and Colonel Thaden. Valued face-to-face classroom cadet instruction during the back half of BYU’s winter semester shifted to online formats to keep students and faculty protected from the virus. Off-campus field training at military bases and other locales around the country had to be canceled. Also scrapped were highly anticipated events, such as the annual military skills competition at West Point. 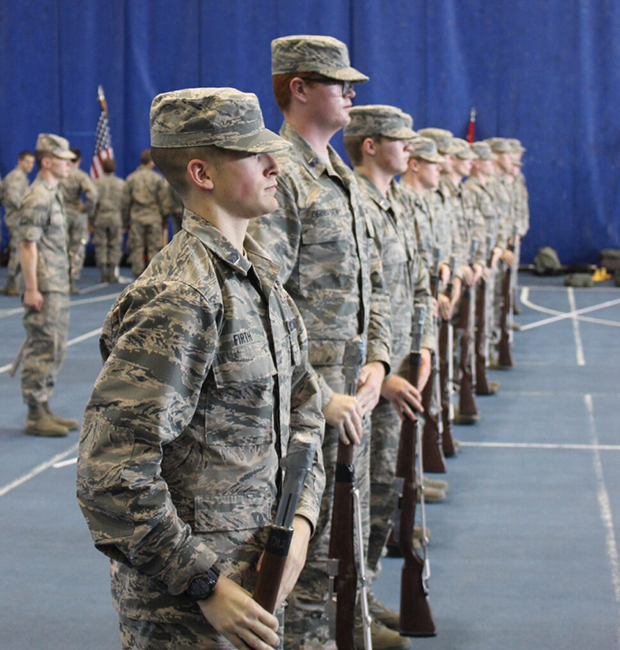 BYU Air Force ROTC cadet Ryan Firth, in foreground, a returned missionary from Missouri, has learned lessons in resiliency during the pandemic. He was commissioned as an officer on May 15, 2020. Photo by BYU Air Force ROTC.

Both commanding officers at BYU agree that the fluid events of the day, although unwelcome, are helping their newly commissioned Latter-day Saint officers learn adaptability, flexibility, and other leadership skills that will serve them well in their military careers.

“When we take the commissioning oath, we swear to support the Constitution of the United States against all enemies, foreign and domestic,” said Thaden. “Who would have thought one of those enemies would be a virus that you can’t see?

“But the virus has still dictated a lot of the things that we are doing in the military. . . . The cadets are seeing how the military is being called upon to help our nation through this crisis.”

Anyone who wears a military uniform soon discovers, in combat or other circumstances, that answers are rarely revealed at the start of any mission.

“When a threat comes up, whether it’s this virus threat or some foreign actor, we have to take steps even when we don’t know the beginning to the end,” said Cook. “We have to keep moving with whatever limited information is available.

“That certainly parallels the military experiences that I’ve had on active duty or deploying overseas.”

Ready for the Officer Ranks at a Moment of Crisis

ROTC Air Force cadet Aaron Cox, who will soon be commissioned to the officer ranks, said he follows the counsel of President Russell M. Nelson to not let the circumstances of the day determine his joy.

Instead, the Palmer, Alaska, native and returned missionary focuses on what is within his control: completing his college degree, commissioning into the Air Force, providing for his family, and expressing gratitude.

“Because of our faith in the Lord, my family and I are able to feel joy and happiness regardless of the unfortunate circumstances we are facing,” he said. “The ‘unknown’ can be intimidating—however, I know that the Lord will never leave us comfortless.

“As long as we are doing our best to turn to Him, we can find peace in times of chaos.”

A newly commissioned U.S. Army 2nd lieutenant, Trevor Gowdy of Dawsonville, Georgia, served a mission to Salt Lake City before enrolling at BYU, getting married to his wife, Autumn, and joining the ROTC program.

The past several months, he acknowledged, have been marked by disruption. And it was disappointing when key training had to be canceled. “But the cadre did a great job adapting to online classes and still fulfilling the curriculum that needed to be learned.”

The ongoing pandemic, he said, was a reminder of a combat truth: one’s original plan rarely survives first contact with the enemy. 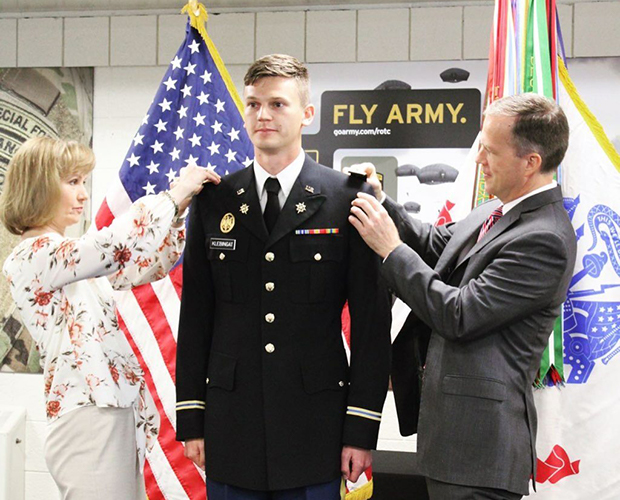 “Another thing that this situation has taught me is to always make sure you are mentally in a place where you can maintain discipline, even when others can’t hold you accountable,” said the German-born Klebingat, who now lives in Utah.

Returned missionary Ryan Firth of St. Louis, Missouri, who served as the BYU Air Force ROTC cadet wing commander last semester, added that the events of the past few months will make him a better leader.

“The pandemic has taught me that the world has a way of throwing changes at you that you never anticipated,” said Firth. “It has caused me to reflect on my level of preparation and encourages me to take that lesson into becoming an officer by realizing that we need to be prepared for the worst—and be flexible when things change.” 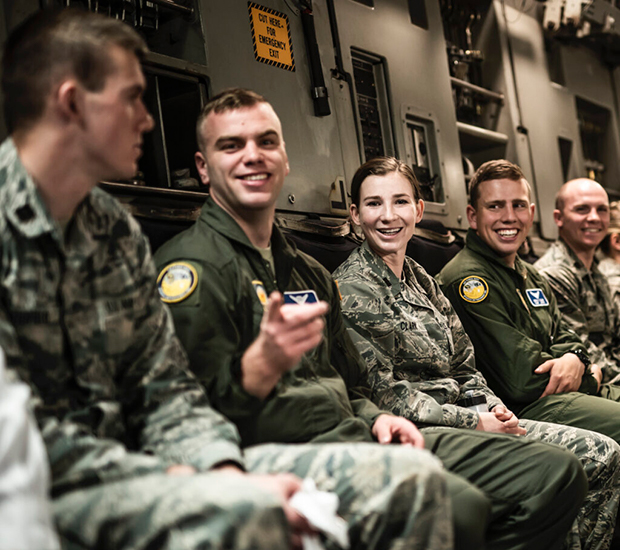