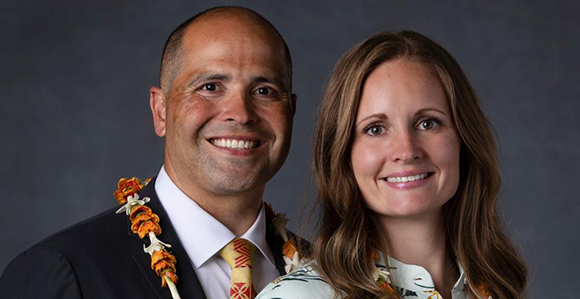 John “Keoni” S. K. Kauwe III and his wife, Monica. In a devotional held at the Church Office Building in Salt Lake City on May 12, 2020, Keoni was announced as BYU–Hawaii’s 11th president, effective July 1, 2020.

With participants gathered via technology to celebrate, in isolation, what should be enjoyed as a “great festive gathering” for one of the most important days in BYU–Hawaii’s history, Elder Jeffrey R. Holland announced the appointment of a new president for the Church-owned university.

During the May 12 devotional, the member of the Quorum of the Twelve Apostles thanked President John S. Tanner for his years of dedicated service and shared his excitement for the tenure of John S. K. Kauwe III—a new time and season of leadership at BYU–Hawaii.

Quoting from Ecclesiastes, Elder Holland said, “To every thing there is a season, and a time to every purpose under the heaven” (Ecclesiastes 3:1). And it is a wonderful time and season “we usher in today at BYU–Hawaii.”

“It is a time for tears of both sorrow and joy, and we ‘pluck up’ a couple who have been so loved by us all and ‘plant’ a new leader who, with his devoted wife, has been called of God and prepared from his childhood upward to continue the miracle that we call Brigham Young University–Hawaii,” he said. 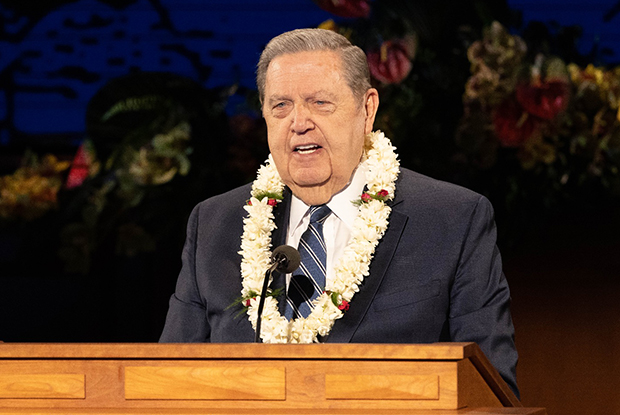 Elder Jeffrey R. Holland of the Quorum of the Twelve Apostles announces that John “Keoni” Kauwe will be the 11th president of BYU–Hawaii.

President Tanner, with his wife, Susan W. Tanner, by his side, has served as the president of BYU–Hawaii for five years, Elder Holland noted.

“Both of the Tanners came to this assignment with ancestral ties to the islands, and both have added to the legacy of devotion for which their forefathers were known here,” Elder Holland said, expressing his gratitude for their service to the institution. “From the first hour of his appointment . . . President Tanner has brought spiritual literacy—or perhaps it is better phrased as literate spirituality—to his position.”

Expressing their gratitude for the last five years at the university, President and Sister Tanner spoke during the devotional of the blessings they have experienced in Hawaii. President Tanner also noted he is particularly excited to know that one of Hawaii’s native sons will serve as the next president. 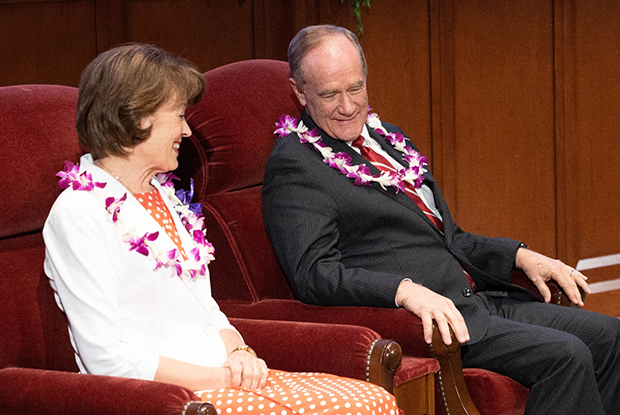 Outgoing BYU–Hawaii president John S. Tanner talks with his wife, Susan W. Tanner, leading up to the university’s weekly devotional on Tuesday, May 12, 2020. President Tanner and his wife served since 2015 and will be replaced by John “Keoni” Kauwe and his wife, Monica, starting July 1, 2020.

John S. K. Kauwe III, better known as Keoni, who has been serving as the dean of graduate studies at BYU, in Provo, Utah, and his wife, Monica Mortensen Kauwe, have an “inordinate love for Hawaii,” Elder Holland said.

Keoni grew up between Hawaii and Utah and completed his high school education on the islands before returning to Utah to attend BYU. He served as a young full-time missionary in the Japan Fukuoka Mission.

Over the years, the Kauwes have frequently returned to Hawaii to renew the family ties and bonds they have to the islands of their heritage. Their return now to serve and work at the university demonstrates a return of a “native son back to the very origins of the restored Church in the Pacific,” Elder Holland said.

“But perhaps entirely unique in the history of any former, or perhaps any future, president of this university is the fact that President Kauwe’s fourth great-grandfather is the legendary Kaleohano who, with Jonathan Napela, were the two most famous and certainly most influential native converts to join the Church at the hand of the new missionary on the island of Maui then-Elder George Q. Cannon,” Elder Holland said.

“Kaleohano served with remarkable faith and tenacity for 45 unbroken years, from the day he joined the Church in March of 1851, when he was baptized by Brother Cannon, to March of 1896, when he passed away.”

It is historic that one of Kaleohano’s descendants today becomes the 11th president of BYU–Hawaii, Elder Holland said. He noted that perhaps President David O. McKay could have imagined nearly 100 years ago, when he first conducted the famous flag raising ceremony still celebrated today, that one of the youth of Hawaii would become president of the college in Laie. “To help celebrate what will be a full century of educational vision in and for the islands will be a new, young president and his wife for whom Hawaii is home and always will be,” Elder Holland said.

BYU–Hawaii gathers people from all over the world and creates unity in spiritual and secular education like no other institution on earth, Keoni said. 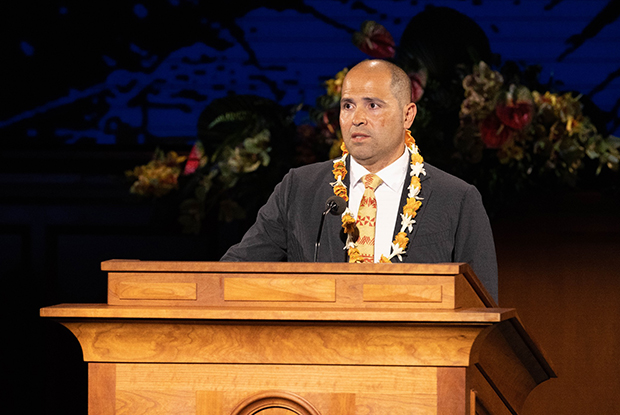 John “Keoni” Kauwe speaks during a livestreamed devotional on May 12, 2020, after being named the 11th president of Brigham Young University–Hawaii.

“This university is and will continue to be a place where people from across the world gather to be one in Christ and educate and uplift each other,” he continued. “Diversity of culture, experience, and thought is one of our greatest strengths. So too is our striving for unity as children of God bathed in the light of the restored gospel.

“Diversity and unity work together here at BYU–Hawaii in remarkable ways. I am deeply committed to building on past efforts to prepare our students with knowledge and testimony sufficient to make them ‘men and women whose influence will be felt for good towards the establishment of peace internationally.’” 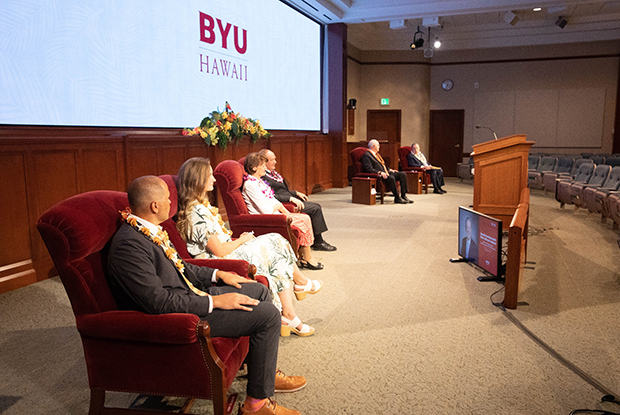 The scene prior to an announcement of a new president of BYU–Hawaii on Tuesday, May 12, 2020, by Elder Jeffrey R. Holland of the Quorum of the Twelve Apostles during the university’s weekly devotional. The address was broadcast from the Church Office Building auditorium on Temple Square in Salt Lake City. 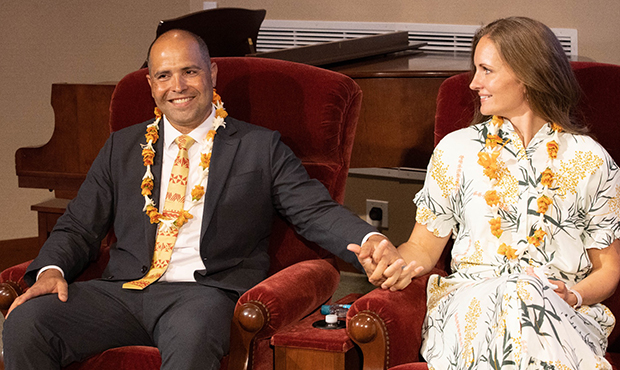 John “Keoni” Kauwe and his wife, Monica, will succeed John S. Tanner and his wife, Susan, who have served at BYU–Hawaii since 2015. 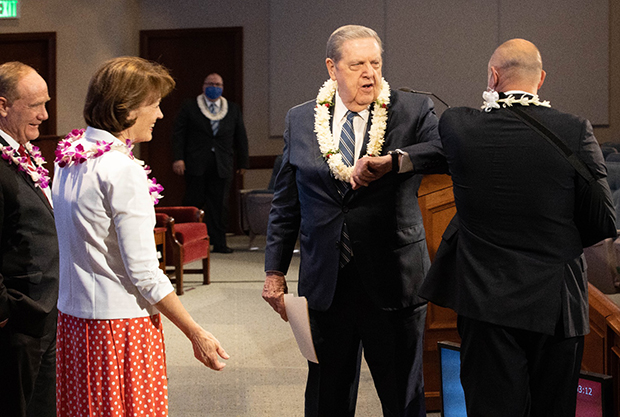 Elder Jeffrey R. Holland of the Quorum of the Twelve Apostles elbow-bumps Jonathan Tanner, John Tanner’s son, who gave the closing prayer at the devotional on Tuesday, May 12, 2020. The event was broadcast from the Church Office Building auditorium on Temple Square in Salt Lake City, Utah.