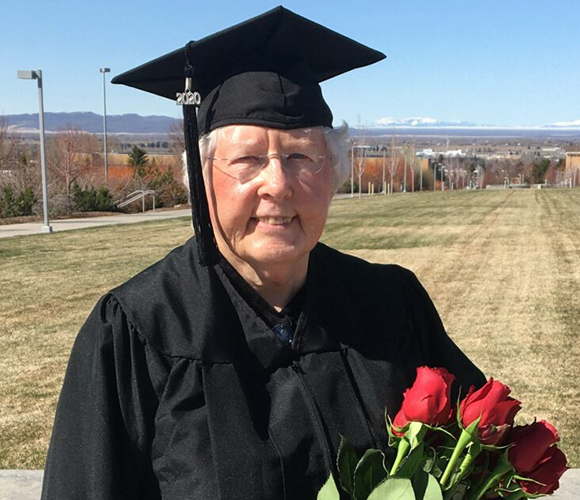 Mae Rudd, 82, poses in her graduation cap and gown after completing requirements for a bachelor of science degree in nursing at BYU–Idaho in April 2020. Photo courtesy of Mae Rudd.

“Education . . . can’t be lost. Education is something you can keep forever.” —Mae Rudd, 82-year-old graduate

Growing up in the 1940s and ’50s in Ontario, Oregon—right next to the Idaho border—Mae Rudd knew she wanted to go to college.

Funding, however, proved an issue. When her cousin told her about a nursing program in which students could work at a hospital to help cover the cost of education, she saw an opportunity to achieve her goal. She applied and was accepted, earning her nursing diploma from the Idaho Falls LDS School of Nursing in 1958.

She soon married and eventually gave birth to eight children. As she and her husband raised their family in eastern Oregon, Rudd worked regularly to maintain her license as a registered nurse.

“I’ve always been able to have a job, which helped support our family,” said Rudd, who now lives in eastern Idaho.

“My RN graduation prepared me for much service during my lifetime that I would not otherwise have had the opportunity to do,” she told the Church News. “So I’ve always been really grateful for that experience and that blessing . . . to always be able to work when I wanted to.”

But she added, “I always wanted a bachelor’s degree.”

When her husband died in 2013, she explored the possibility of completing an RN-to-BSN program—but determined it was too expensive.

“I always thought it was a selfish thing at this point because I’m not able to have a job or work,” Rudd said of her aspiration to complete a bachelor’s degree in her later years.

But she also recognized the value of education: “It’s the only thing you can take with you.”

Then she was invited to participate in BYU–Pathway Worldwide’s PathwayConnect program—a one-year online curriculum designed to prepare students to start or complete a college degree.

“They were inviting old people to participate. I was frightened to take advantage of it, but I was also . . . happy,” said Rudd, who started the program in Boise, Idaho, and finished in Heber City, Utah.

PathwayConnect aims to integrate academic and spiritual learning through online classes and weekly in-person or virtual meetings with other students in the program. Credits earned during the program count toward a bachelor’s degree.

“I was afraid because I thought that I probably couldn’t do it at this age. But my experience there was better than you could imagine,” she said. “The younger people that participated were all very supportive and really helpful and encouraging. . . . It was a grand experience to go to class with them each Thursday evening and see their progress and hear them teach.”

“Almost anybody who participates in it feels the same way—that that was the resource that gave them the courage to continue,” Rudd said.

“Because I successfully managed Pathway, it gave me confidence that I could get this degree.”

After completing the PathwayConnect program, Rudd was accepted to an online RN-to-BSN program through BYU–Idaho, which she completed in April 2020. Though her graduation ceremony was canceled due to the COVID-19 pandemic, she has earned a bachelor of science degree in nursing, 62 years after receiving her initial nursing diploma.

Her recent graduation typifies a legacy of lifelong learning and commitment to goals—an example she sets for her children, 25 grandchildren, and 26 great-grandchildren. She believes anyone “has the ability to reach a goal if you want it bad enough.”

Even though she won’t apply her fresh credentials to a professional career, Rudd is “very happy” about her accomplishment. “Education . . . can’t be lost,” she said. “Education is something you can keep forever.”

Mae Rudd poses with her extended family in 2013. Photo courtesy of Mae Rudd.