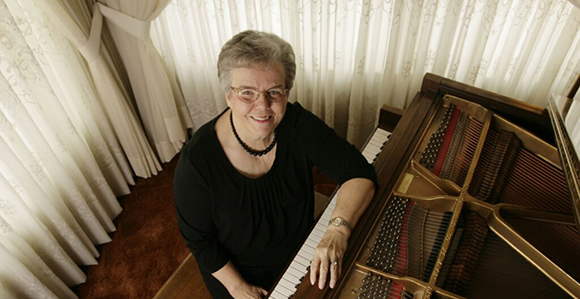 “When you set that testimony to music, it sinks deeper into someone’s heart. That’s the magic of music.” —Janice Kapp Perry, composer

One day when Janice Kapp Perry was 40 years old, she looked at “I Am a Child of God” and realized the beauty in the Primary song’s simplicity.

It was simple music with simple words but had a profound meaning.

Although she had not written music since her time as a BYU student, the songwriter set two specific goals: add to the simple music of the The Church of Jesus Christ of Latter-day Saints and write a song that Primary children would sing one day.

Her well-known repertoire includes Primary hymns “A Child’s Prayer,” “I Love to See the Temple,” and “I’m Trying to Be like Jesus,” plus seven more in the Primary songbook.

Perry, the composer and author of nearly 3,000 songs and hymns beloved by Latter-day Saints, received an honorary doctorate degree from Brigham Young University on April 23.

“When I started to write, it was exhilarating, and I wondered why I had not thought to do it sooner,” Perry said. “I was hooked. I knew I wanted to write music. I got a late start, but it’s never too late.”

Now 81, the author, composer, and songwriter said she is truly honored to receive a BYU honorary doctorate “as a culminating event in my life.”

Perry suffered a severe stroke last November. When BYU president Kevin J. Worthen, Perry’s neighbor of nearly 30 years, came to her house after her stroke, she assumed he was just coming to check on her progress. She said she was “dumbfounded” when he announced the honorary doctorate degree she would receive.

Due to the COVID-19 pandemic, BYU canceled the April 2020 commencement ceremony. Consequently, Perry did not know how she would receive her award.

Then President Worthen offered to personally deliver it.

Relieved she wouldn’t have to speak in front of thousands of people, Perry put on her BYU sweatshirt and accepted the Honorary Doctor of Christian Service in Music award in her kitchen.

President Worthen came masked and gloved and kept at a distance. He opened a beautiful wooden box that had an academic robe and the letter certificate.

“It just couldn’t have been nicer,” Perry said.

“I felt honored to present her with an Honorary Doctor of Christian Service in Music in that setting,” President Worthen told Church News. “It was definitely a unique setting for the conferral of such a distinguished award. However, it was more personal and individualized, which in some ways was more fitting for Sister Perry.”

Perry grew up in a musical home. Her father and mother played in a dance band, and Perry’s mother taught her how to play the piano.

“I was sacrament meeting chorister for a few years, including one Sunday when President David O. McKay was visiting our ward. I stood just a few feet away from him as I conducted the congregation in singing ‘We Thank Thee, O God, for a Prophet,’” she said. “I received a burning witness during the singing of that hymn that he was in very deed a prophet of God.”

A self-proclaimed “sports nut,” Perry played softball, volleyball, basketball, and on other teams from age 15 to age 40.

When she was almost 40 years old, Perry had what she called “two lucky breaks” that switched her focus from sports to music: her TV broke, and she broke her ankle playing basketball. Encouraged by her bishop at the time, she started to write music for the ward’s road show.

Her life of service doesn’t stop at songwriting. She sang in The Tabernacle Choir at Temple Square from 1993 to 1999, and she and her husband served a mission in the Santiago Chile West Mission from 2002 to 2003. Upon returning, they held a special fireside for Spanish speakers—combining their loves of Spanish and music—and traveled to many stakes in the United States and in other countries, sharing their music.

Janice Kapp Perry says her motivation to write songs comes from a desire to bear her testimony.

“When you set that testimony to music, it sinks deeper into someone’s heart. That’s the magic of music,” said Perry. 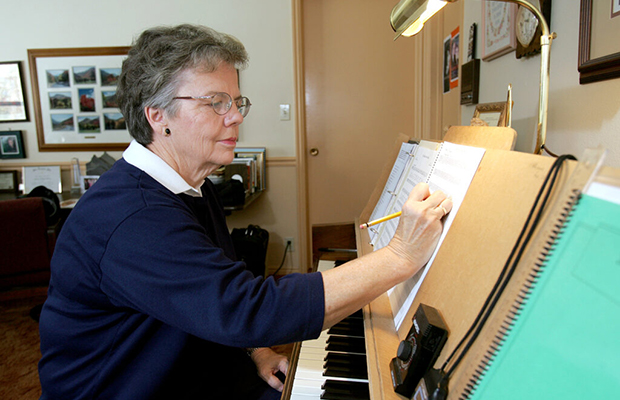 Janice Kapp Perry, a well-known Latter-day Saint songwriter, writes some of her music at the piano, but most is written from a chair in the same room as this piano. Photo taken on November 18, 2004, by Stuart Johnson, Deseret News.

Music composer and BYU student Laura Belliston said, “I can remember singing “A Child’s Prayer” even when I was young and just feeling the Spirit testify to me that I had a Heavenly Father who loves me and that He is listening to every one of my prayers. So, honestly, her music is a lot of the reason why I have a testimony of this gospel.”

“So much of her work has been performed individually, out of the limelight, and so much of her impact has been on a personal level in Latter-day Saint homes throughout the world,” said President Worthen. “Her graceful nature and her heartfelt gratitude and love for BYU were abundantly present.”

Currently, Perry is collaborating with text writer Bonnie Hart Murray to write narrative Book of Mormon hymns. She is also writing hymns with text writer David B. Larsen based on conference talks by members of the First Presidency and Quorum of the Twelve Apostles. “Sometimes I write my own lyrics, but I get more done if I work with other people too,” she said.

Perry has produced 108 music albums—including some in Spanish, Portuguese, Japanese, Korean, and Mandarin—and continues today to share her testimony through music.

“I’ve learned from Sister Perry . . . about the power of giving one’s life and gifts and energy to God,” said Jan Pinborough, a member of the Church and musician who has worked with Sister Perry. “She gives her remarkable gift again and again and without hesitation. She’s trying to be like Jesus. In deed and word and song, she’s been showing us all how.”

BYU has awarded one influential individual an honorary doctorate degree at almost every commencement ceremony since 1951. Previous recipients include President Russell M. Nelson, who was recognized with a doctor of science honorary degree in 1970. 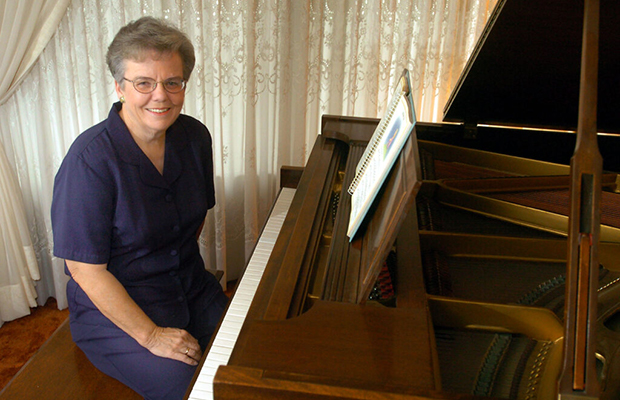 Songwriter Janice Kapp Perry, recently home from a mission in Chile, sits at her piano in her Provo, Utah, home on Wednesday, October 20, 2004. Photo by Keith Johnson, Deseret News.