Showing Love in an Ancient Land

How would a living prophet, an apostle of the Lord Jesus Christ, treat young children in Guatemala today? The same way the Savior treated children during His ministry in the Holy Land, when He said, “Suffer the little children to come unto me, and forbid them not: for of such is the kingdom of God” (Mark 10:14). 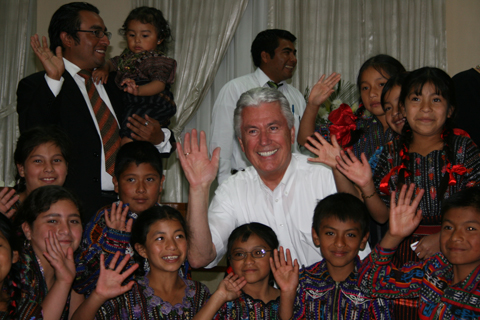 President Uchtdorf joins with children in Guatemala to send their good wishes and greetings to President Thomas S. Monson.

And that is exactly how President Dieter F. Uchtdorf, Second Counselor in the First Presidency, treated little children during a recent visit in Guatemala—he sought them out, and as the Savior did when He appeared in the New World, President Uchtdorf “took their little children, one by one, and blessed them, and prayed unto the Father for them” (3 Nephi 17:21). 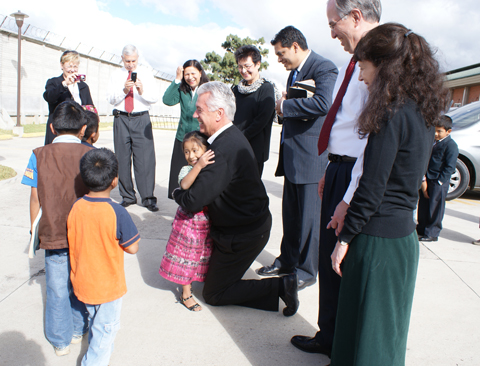 Wherever he stops along the way, President Uchtdorf kneels down so he can talk with the children on their level.

See You in the Temple

President Uchtdorf had come to Guatemala, an ancient land once ruled by the Mayans, for the dedication of the new temple in Quetzaltenango. He was accompanied by another Apostle, Elder Neil L. Andersen of the Quorum of the Twelve Apostles, and by Elder Enrique R. Falabella of the Seventy, who serves as Area President in the Central America Area.

Elder Falabella summarized his experience of traveling with President Uchtdorf: “I saw him with the children, kneeling to see them eye-to-eye; I saw him singing and playing with them. I saw him among the youth, showing a jovial and happy side of himself. I saw him among the adults, blessing their lives and their families, and I saw him standing with power and authority, as a prophet of God that blessed, loved, and elevated the spirits of those who listened to him.”

As President Uchtdorf presided at the dedication, he referred to the temple as a light in the land, and during informal gatherings before and after the dedication, President Uchtdorf met with children and their parents in smaller towns outside Quetzaltenango to share with them the light that the gospel and the temple bring. In doing so, he often kneeled to speak with children directly and embrace them warmly. 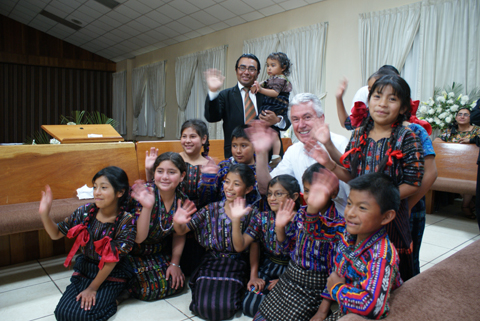 In Sololá, a city of 80,000 that is mostly Mayan, he told the children, “In [a few] years we will see you in the temple in Quetzaltenango, or in Guatemala City, being baptized for your ancestors, or we’ll see you go to the temple to be married. [Won’t that] be nice?”

He said that two days later, when he saw President Monson, he would tell him, “I have seen the most handsome and the most beautiful children of all the world—and the smartest ones. And I will tell [him] I saw them right here in Guatemala. Why don’t you wave to the prophet? And we will take these pictures to him and say, ‘President Monson, these are your friends.’” 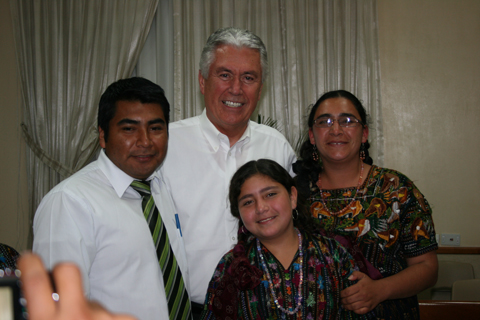 A family has their photo taken with President Uchtdorf, creating a souvenir that will remind them, they say, of the importance of keeping the commandments so their family can be blessed by Heavenly Father.

President José Miguel Guit Batz of the Sololá 2nd Branch, Sololá District, said, “He took my daughter into his arms, and together with my wife we took a picture so we could have a remembrance of him. Each time we look at that picture I remember that I should be faithful in the gospel of Christ so that someday I can return to my Heavenly Father, together with my family, as an eternal family.” 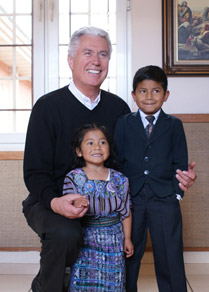 A similar event occurred in Patzicia, a town of less than 20,000. “President Uchtdorf took my children in his arms, kissed their heads, and gave them a blessing promising them health, knowledge, and spiritual strength,” said President William Miguel Can of the Patzicia Stake. “He also blessed my wife and I, while at the same time saying he would convey our love to President Monson and that he would tell him that the promises are being fulfilled and that the Lamanites in truth are flourishing, and that they are a people that love the gospel of Jesus Christ. … I know without a doubt that from now on Patzicia will not be the same because a prophet of God visited this place and left a prophetic blessing over the people here. …  My children treasure in their minds and their hearts the blessing of [a] prophet of God, and each time they look at their heads in the mirror they remember that a prophet embraced them and blessed and kissed them.”

“Now I understand,” President Uchtdorf said, “why President [Boyd K.] Packer [of the Quorum of the Twelve Apostles] loves to come to Guatemala. You are the descendants of Lehi; I can see your valued lineage, legacy, and heritage in each one of you.” He left a blessing that if they will be faithful, they will lack nothing and that all the promised blessings to the descendants of Lehi will be fulfilled.

In Antigua, a city of 35,000 in the central highlands of Guatemala, Melvin J. Recinos, a manager of regional facilities for the Church, recalls that President Uchtdorf “always sought the opportunity to be close to us.” He said, “I am trying to describe with words what my heart felt that day, but I cannot. The feelings I had are indescribable, and I have no doubt that that day the Lord was also at our side. Since the day of the visit, the influence of the Spirit that I felt has not left me. I have felt a desire to be a better husband, a better father, and a better servant [of God].” 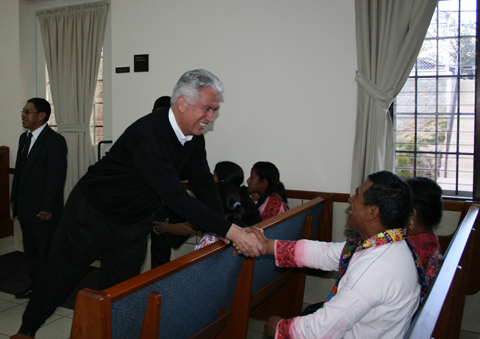 A member grasps President Uchtdorf’s hand with joy, impressed with the friendliness and closeness a prophet and apostle showed to those he met.

Thank You for Building the Church

Along the way, President Uchtdorf also thanked members who helped to pioneer the Church in Guatemala.

In Patzicia, he met Bishop Lázaro Cua Mich, grandson of the first person to join the Church there.

In Sololá, he smiled and laughed as he visited with the grandfather of the branch president and thanked him for traveling to the Mesa Arizona Temple in 1965 to create a “legacy of love” that is now entering the fourth generation in his family. “I was there in 1962,” President Uchtdorf said, “so we just missed each other! You can be proud of your son and your grandson and his beautiful wife.”

In Chirijox, a small town near Sololá, he said, “I feel blessed to be in this place with majestic mountains and such a beautiful view, but the most beautiful are the people, full of faith and devotion to God.”  He told the bishop’s father, “You have a good son; he is a faithful servant of the Lord.”

President Uchtdorf also received a copy of the conversion story of Ricardo Pérez and Ignacia Citalán de Pérez, written by their son, Israel Pérez. Brother and Sister Pérez were baptized in 1954. Today 163 of their descendants are members of the Church. 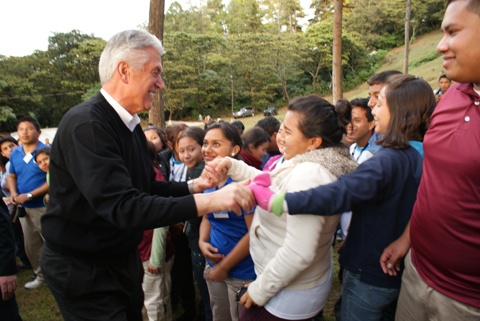 Following his comments at an informal gathering of teens, President Uchtdorf greets well-wishers.

Prepare for the Future

Talking to youth who gathered at a Church-owned camp in the mountains, President Uchtdorf described the new temple in Quetzaltenango as a treasure.

“Isn’t that beautiful, how it sits above the valley?” he said. “It shines like a white light, right there. In many ways, that is you. The world needs you; Quetzaltenango needs you; your families need you. Be an example. Be a light, like the temple in Quetzaltenango, and you will see great blessings come your way.”

He praised those who participated in the cultural celebration associated with the dedication of the temple. “You are a beautiful people in a beautiful country, but you have even more,” he said. “You have the gospel of Jesus Christ. … And I ask you, along with my fellow Apostle Elder Andersen, to follow the path of the gospel, which is discipleship of Jesus Christ. You will be the future of this country. You are the future of the Church in this country. Your service, your testimony, your wonderful passion for the gospel of Jesus Christ will have an impact in this country and to nations where you will be privileged to serve. … Prepare well.” 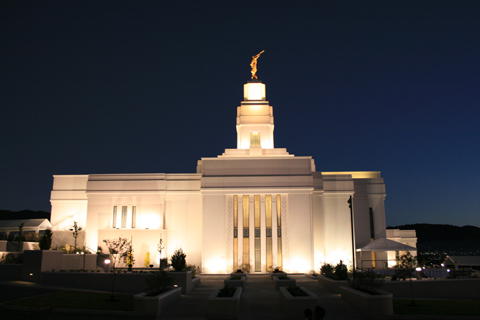 The Quetzaltenango Guatemala Temple shines like a white light, President Uchtdorf said. He said it is like the youth of the Church, who should be a light to those around them.

Part of that preparation, he said, is to learn as much as possible, including additional languages such as English, which he called the language of the Restoration. “But also,” he said, “and most importantly, make sure you get the education in the gospel of Jesus Christ. Lay a foundation through seminary and institute, through your personal testimony.”

He said, “For certain seasons of life, you can stand on the testimonies of your parents, your friends, your leaders. But as soon as possible, get your own testimony. … Find out what the questions in your heart and your mind are about the gospel of Jesus Christ, about The Church of Jesus Christ of Latter-day Saints. And then find your answers by reading, by studying, by conversing with your friends and leaders, and most importantly by conversing with the Lord.” 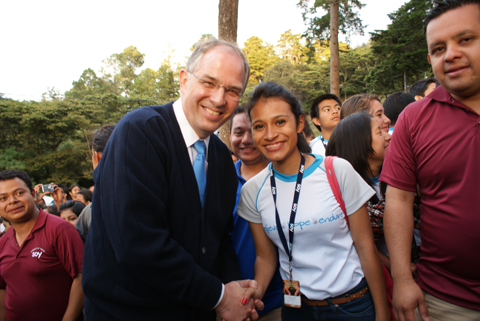 Elder Neil L. Andersen of the Quorum of the Twelve Apostles, who accompanied President Uchtdorf, shakes hands with a young sister at a gathering for LDS youth.

He encouraged the youth to live according to the principles and standards in For the Strength of Youth, which he said is a great way to prepare to go to the temple. “Life can be complicated,” he said, “but the gospel of Jesus Christ has the values to bring wonderful, straightforward, simple answers and solutions to the most complex things in life. So … simplify your life and keep the commandments of God. It’s that simple.”

Through goodness and persistence, he said, “miracles will happen in your life.” 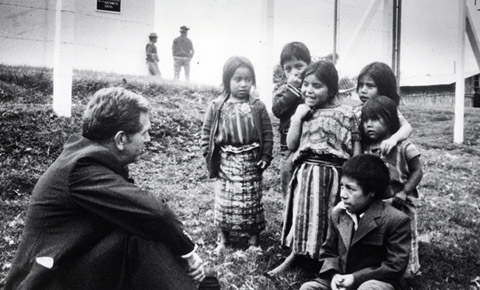 In a photograph taken in 1979, then Elder Boyd K. Packer of the Quorum of the Twelve Apostles visits with children in Guatemala.

An Abiding Love for Guatemala

President Boyd K. Packer of the Quorum of the Twelve Apostles has an abiding love for the people of Guatemala. He has visited the country several times. During a week-long visit in 1979, he dedicated 10 different meetinghouses, and in 1994 he dedicated the Guatemala Missionary Training Center. As President Uchtdorf and Elder Andersen did during their recent trip associated with the temple dedication, President Packer often visited with the children and shared with them his love for the Savior Jesus Christ, his testimony of the Restoration, and his conviction that the Book of Mormon is true.

An Abiding Love for Guatemala

Elder Andersen commented: “There is a time for celebration, and we had a wonderful celebration prior to the temple dedication. But there is also a time for reverence. It is necessary to prepare for wonderful, sacred experiences like the dedication of a temple and to prepare ourselves to listen to the counsel of living prophets. It is my testimony that Jesus Christ lives and that He was resurrected. He leads this Church today, through the First Presidency. I know that the First Presidency are prophets of God.”