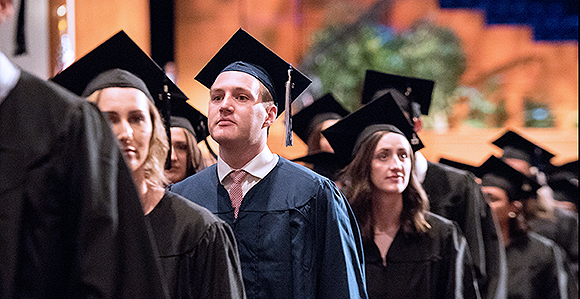 Graduates gather for commencement exericises at BYU–Idaho on July 23, 2018. Photo by Cami Su.

“Time after time, remarkable accomplishments have been achieved by weak and simple people who trusted God’s power over their own.” —Brother Douglas D. Holmes, Young Men General Presidency

“The defining challenge of our day is to discern, obey, and defend truth,” said Brother Douglas D. Holmes, First Counselor in the Young Men General Presidency, during commencement exercises at Brigham Young University–Idaho on July 23.

“This is not a small thing, for only the truth—a pure knowledge of things as they really are—will make us free and lead us to happiness now and in eternity,” he said.

Brother Holmes warned of the deceit of self-confidence and spoke of developing a confidence based on trusting in God.

Rather, the scriptures teach the opposite—to always remember “the greatness of God, and your own nothingness” (Mosiah 4:11), with warnings against those who “putteth his trust in the arm of flesh” (2 Nephi 4:34) and encouragement to “trust in the Lord with all thine heart; and lean not unto thine own understanding” (Proverbs 3:5).

Citing examples such as Nephi and Helaman in the Book of Mormon and Joseph Smith, Brother Holmes recognized that all of these men had put their confidence in God. 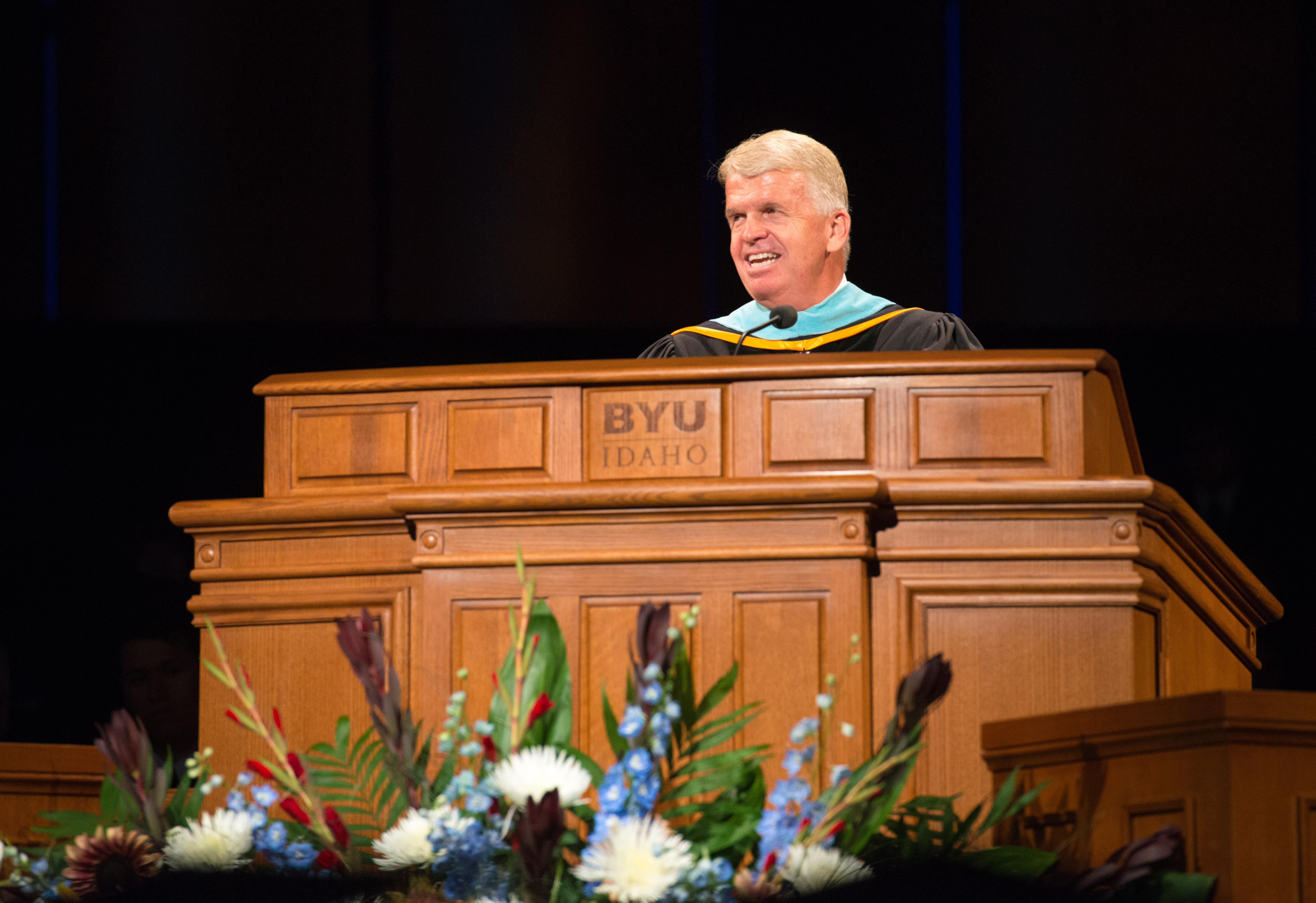 “These examples barely scratch the surface of this prominent scriptural theme,” he said. “Time after time, remarkable accomplishments have been achieved by weak and simple people who trusted God’s power over their own.”

1. Feast on and obey the word of God.

The best way to both avoid deception and increase a divinely based confidence comes through feasting on and obeying the word of God, he said. “It is the iron rod, composed of the scriptures, the words of living prophets, and the whisperings of the Holy Ghost, that enables us to navigate safely through the mists of darkness which permeate our world. Letting go for even a moment makes us vulnerable to the subtle and pervasive deceits of the philosophies of men.”

“When we ‘always remember Him,’ we see God as the source of all that is good, ‘the foundation of all righteousness,’ and we feel gratitude for every blessing, opportunity, challenge, and gift we receive. When we willingly recognize the source of our blessings, our confidence in God increases.” 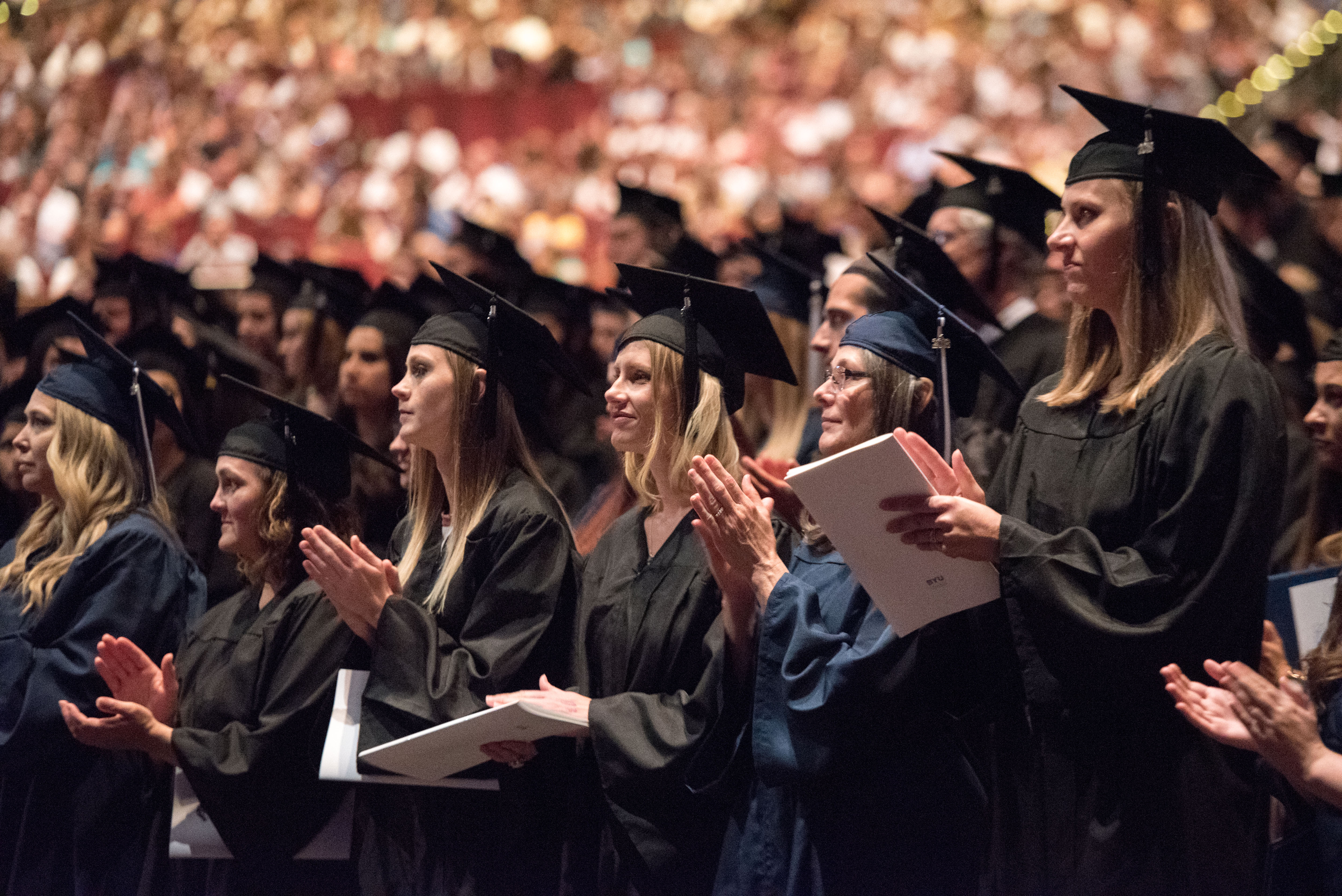 Graduates gather for commencement exercises at BYU–Idaho on July 23, 2018. Photo by Cami Su.

3. Forget yourself and serve others.

“Central to Satan’s great plan of misery is a focus on self—including self-confidence. The great plan of happiness, in contrast, teaches that the only way we actually find ourselves and true happiness is to lose ourselves in the service of others. I invite you to pray daily for and act on opportunities to serve others.”

Joining Brother Holmes on the program, held in the BYU–Idaho Center on July 23, was Elder Kim B. Clark, General Authority Seventy and Commissioner of Education for the Church, and BYU–Idaho President Henry J. Eyring.

During his remarks, Elder Clark encouraged courage and offered hope to students as they embarked on their next part of life.

This is a “time of much darkness, but also much greater light,” he said.

He offered three points—suggestions and promises of the Lord—to those who are true and faithful.

First, he encouraged graduates go to “the temples of the Lord” as often as possible. In doing so, he promised confidence in the Lord and His love and power.

Second, Elder Clark said the Lord will be with each person wherever he or she goes.

Third, he said, in the coming days, all will stand before Him and see His majesty and power.

This semester’s graduating class at BYU–Idaho consists of 2,349 students earning 1,909 bachelor’s degrees and 484 associate degrees. Of the grads, 1,398 are women and 951 are men, and 1,680 of those are campus-based students. Some 667 graduates are online students, and 462 of the graduates started college through the Pathway program. 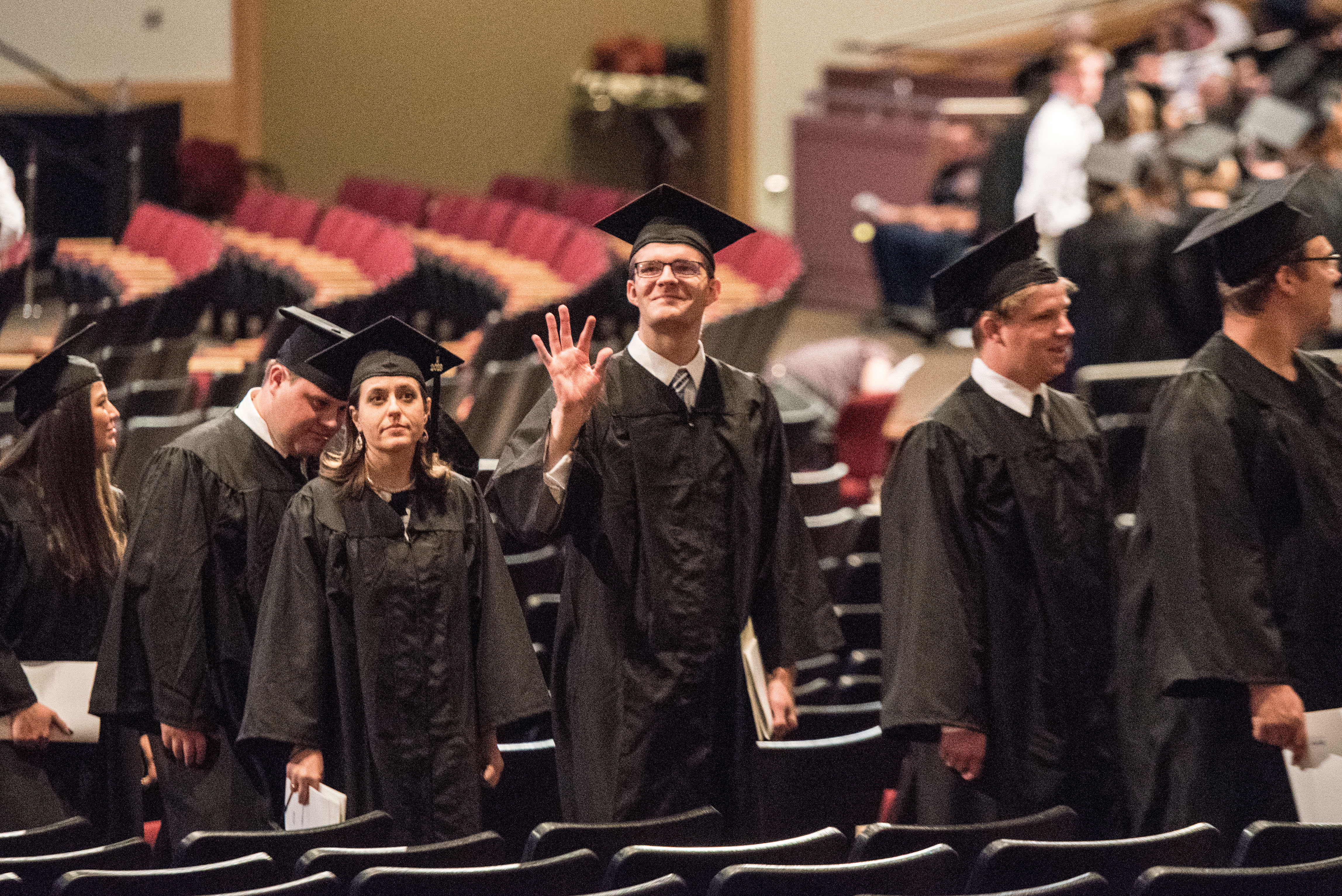 Graduates gather for commencement exercises at BYU–Idaho on July 23, 2018. Photo by Cami Su. 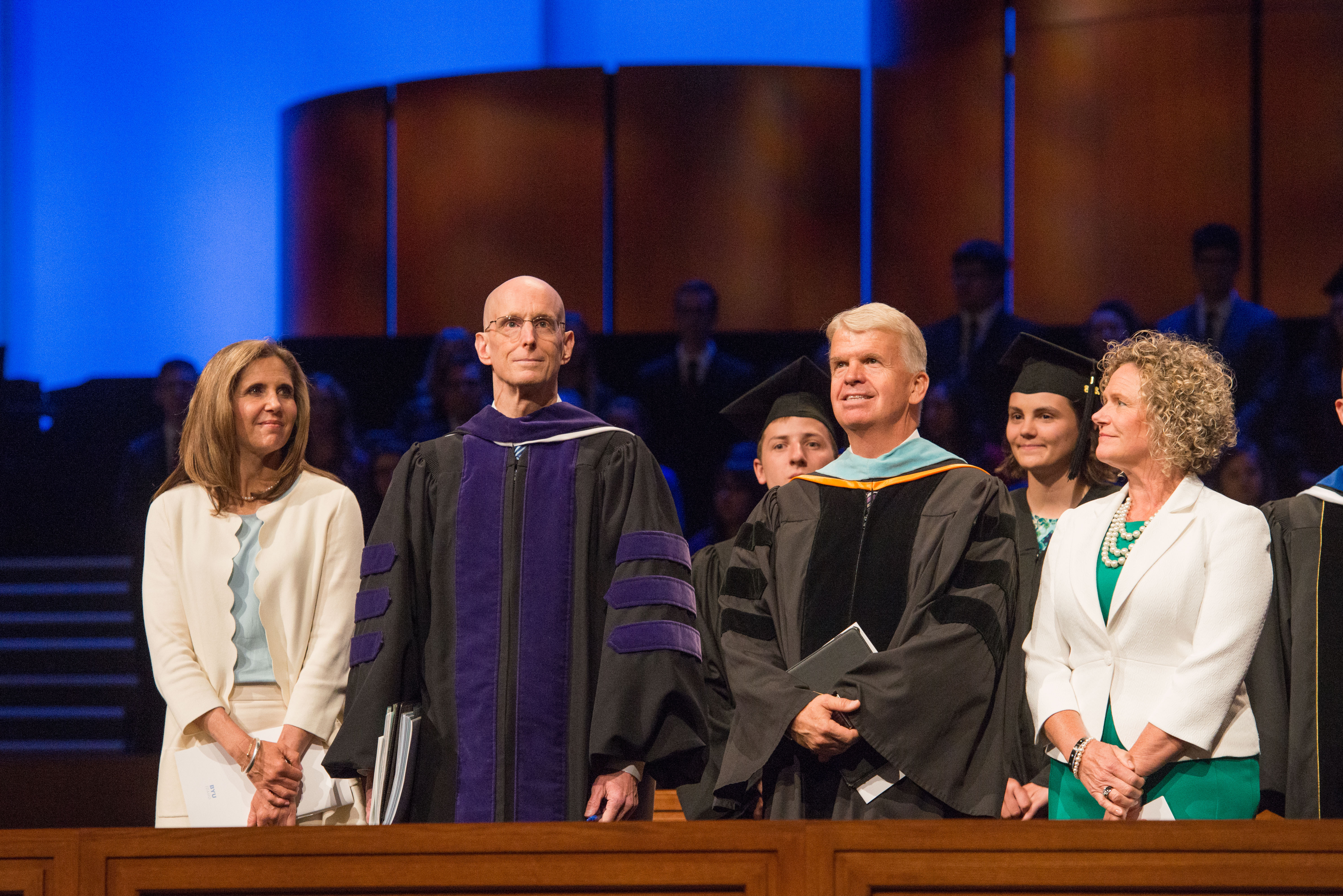 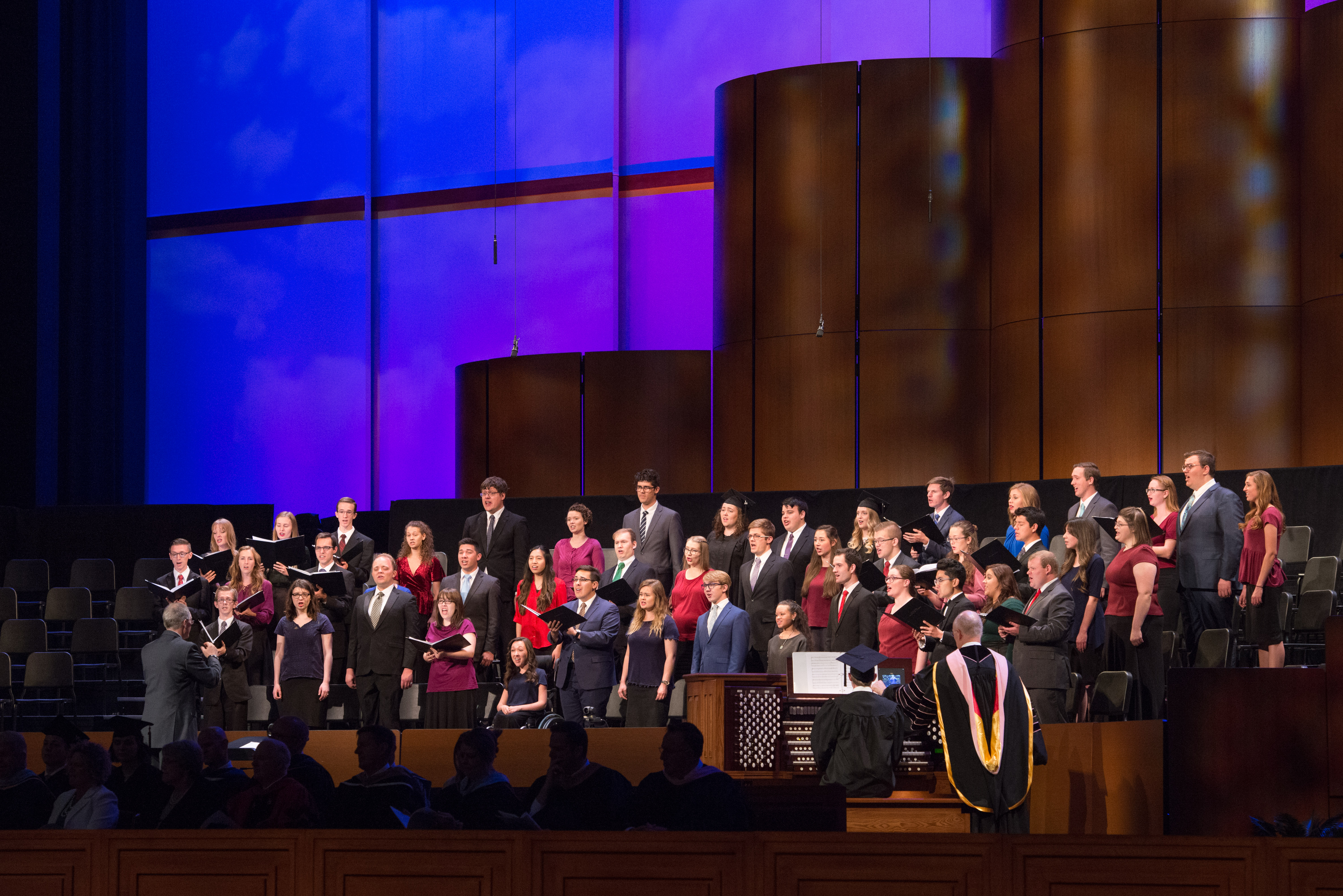 BYU–Idaho graduation ceremonies in the BYU–Idaho Center on July 23, 2018. Photo by Michael Lewis.