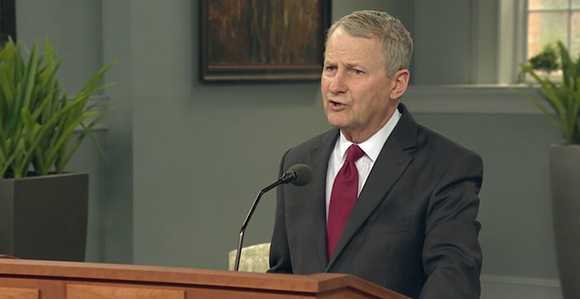 “The testimony we have from a series of spiritual experiences can carry us over the few events or situations that we simply cannot explain well.” —Elder LeGrand R. Curtis Jr., General Authority Seventy

When Elder LeGrand R. Curtis Jr. served as a mission president in Italy from 1998 to 2001, one of his missionaries referred to a testimony-building experience as creating a “lasagna testimony.”

“It’s the little things like that that really add another layer of lasagna to the lasagna testimony,” the missionary said.

Lasagna has layer after layer of cheese, noodles, and sauce, noted Elder Curtis, a General Authority Seventy and Church Historian and Recorder, who spoke about testimony during a May 12 LDS Business College videoconference devotional.

“Our testimony grows as we add layer after layer of spiritual experiences,” he said, then explaining the process of adding layers to one’s testimony.

“Fasting, listening to sacred music, reading the scriptures, repenting, thanking the Lord, giving service to others—have you found that those things bring the Spirit and in turn strengthen your testimony?” Elder Curtis asked.

In the LDSBC virtual devotional, he focused on the foundational concept of testimony—what a testimony is and how members can obtain and strengthen their testimonies.

Many years ago, before his call as a General Authority Seventy and Church Historian, Elder Curtis served as bishop over a ward with many youth. In his interviews with them, he would ask, “Do you have a testimony?”

“The answers were very interesting,” he recalled. “Some knew exactly what I meant and would tell me of the spiritual experiences in their lives that led them to have testimonies. But some would say something like, ‘I don’t like to bear my testimony.’”

Elder Curtis would then explain he wasn’t asking about bearing a testimony—he was asking about receiving one.

“I would ask, ‘Have you had experiences in your life where you felt the Spirit of God, which let you know that God is there and loves you?’ If they hesitated, I suggested some of the times that might have happened—while reading the scriptures, during prayer, during a seminary class, in a testimony meeting at Young Women’s camp, etc.

“I would explain that a testimony is the result of the Spirit of God witnessing to their Spirit that He lives and that the gospel is true,” he said.

Some youth remembered such experiences, while others admitted they hadn’t yet experienced those feelings.

Elder Curtis’s ensuing advice for those youth extends to all—do the things that would put oneself in a position where those types of experiences would occur.

“I first received a testimony as a teenage seminary student reading the Book of Mormon for the first time,” Elder Curtis said. “It was good, it was warm, it grew, and I knew it was from God. For me, that feeling returns every time I open the Book of Mormon.”

However, he adjusted his point of view much later during a stake conference performance of the hymn “The Spirit of God.” The hymn triggered an early childhood memory of listening to that song at a stake conference as a little boy with his parents before he ever attended seminary.

In that moment, he realized the first time he had felt the Spirit was not as a seminary student—rather, he had “undoubtedly felt the Spirit many other times” by the time he was old enough to attend seminary.

Thus, he said, testimonies grow from “layers” of spiritual experiences.

In speaking about the lasagna-like layering of building and increasing one’s testimony, Elder Curtis said his testimony has grown through learning more about Church history. “Every day my testimony is strengthened by the wonderful events of our history,” the Church Historian and Recorder said.

For Elder Curtis, one of those “wonderful events” is the translation of the Book of Mormon.

“As a 21-year-old, Joseph Smith was given possession of the gold plates. At that time, he knew no language other than English. In fact, according to his wife Emma, his English skills were not very good.”

But Joseph translated the book through “the gift and power of God.”

More about this translation process can be found in the Church’s ongoing narrative history series called Saints: The Story of the Church of Jesus Christ in the Latter Days. 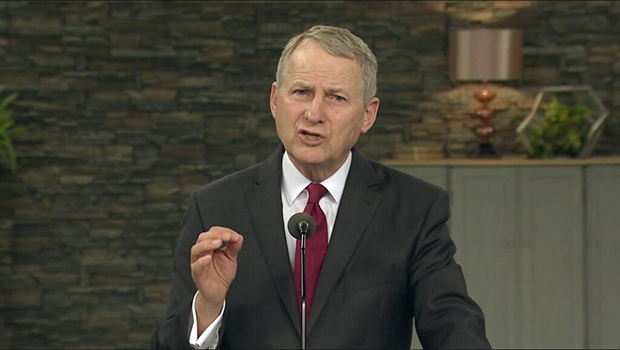 The first volume of Saints documents some of Elder Curtis’s “favorite” events, such as “the dedication of the Kirtland Temple, the visions in the Kirtland Temple that occurred a week later, John Taylor’s and Willard Richards’s fearless defense of the Prophet in Carthage Jail, and the Lord’s revealing of the Twelve’s right to lead the Church after the martyrdom of Joseph and Hyrum.”

The second volume of Saints—released earlier this year—includes even more events, such as the long-anticipated dedication of the Salt Lake Temple.

“That spiritual dedication culminated a very challenging period for the Church,” said Elder Curtis. “But shining through the difficulties is the faith of the people that ultimately triumphed over their trials.”

While Elder Curtis recommends the study of Church history to strengthen members’ testimonies, he also realizes the “irony” that such study has led some members of the Church to lose their faith.

He outlines four guides to avoid that mistake:

Elder Curtis understands that sometimes, even after members have realized imperfections in leaders and have sought to understand context, “we will encounter things in Church history—or Church doctrine, for that matter—that we cannot explain even with all the context we can get.”

Camilla Eyring Kimball, President Spencer W. Kimball’s wife, dealt with those situations in this way: “When things troubled her, she put them on the shelf; later when she looked at them again, some were answered, some seemed no longer important, and some needed to go back on the shelf for another time.”

Elder Curtis testified that over time things members do know “outweigh the items on the shelf.”

“The testimony we have from a series of spiritual experiences can carry us over the few events or situations that we simply cannot explain well,” he said.

Elder Curtis concluded, “I pray that you will be blessed with layer after layer of spiritual experiences that make your testimony deep and personally satisfying.”

He encouraged listeners everywhere to read Saints. Digital versions are available in the Gospel Library app or on ChurchofJesusChrist.org.