Portrait of Joseph Smith. In June 1842, Sutcliffe Maudsley created portraits of Joseph Smith and several of his family members. Maudsley probably used a pantograph, which created a profile of the subject. The resulting portrait may have been displayed in Smith’s home, where Eliza R. Snow was living in August 1842. She may have been thinking of it when she wrote the poem titled “Your Portrait.” Photo courtesy of the Church History Museum.

“[Volume 10] shows the very real interaction between the everyday, the mundane, the real circumstances Joseph Smith finds himself in and the teachings that come out of this period.” —Jordan T. Watkins, volume 10 editor

The summer of 1842 was a “tumultuous” one for the Prophet Joseph Smith, said Matthew C. Godfrey, an editor for the new Joseph Smith Papers, Documents Volume 10: May–August 1842.

Following “the calm before the storm” in 1841, when the Saints built up Nauvoo, the summer of 1842 is marked by the excommunication of John C. Bennett—former assistant president in the First Presidency—and an extradition attempt that forced Joseph into hiding.

“It’s really over these questions of extradition, how Joseph deals with extradition, getting writs of habeas corpus so that he’s released from custody—all of these things are what’s going to culminate in his assassination in June of 1844,” Godfrey said.

The latest Joseph Smith Papers volume was released on May 4. Documents, Volume 10 features more than 100 documents over a four-month period that give insight to Joseph Smith’s civic and ecclesiastical responsibilities, John C. Bennett’s excommunication, finances in Nauvoo, and the expansion of plural marriage, among other topics.

“We get a lot of the messy realities of life in Documents, Volume 10, whether that’s bitter disputes or slanderous accusations or the politics of the community—all of that’s there,” said Elizabeth A. Kuehn, an editor for volume 10.

The 105 documents in volume 10 include the following:

“One of the main takeaways is that this is a really busy time in Joseph’s life,” Kuehn said. Joseph Smith’s roles included mayor of Nauvoo, lieutenant general of the Nauvoo militia, registrar of Nauvoo, editor of the Church’s newspaper Times and Seasons, and store owner—not to mention Church President, husband, and father.

In a letter to fellow Apostle Parley P. Pratt, Wilford Woodruff wrote he had “never seen Joseph as full of business as of late,” and “he hardly gets time to sign his name.”

Jordan T. Watkins, also an editor of volume 10, said sometimes readers or historians tend to separate Joseph’s doctrinal teachings or sermons from his everyday affairs. “But this volume demonstrates that those are very much tied together. . . . It shows the very real interaction between the everyday, the mundane, the real circumstances Joseph Smith finds himself in and the teachings that come out of this period.”

For example, Joseph went into hiding in August 1842 after rumors he was behind the assassination attempt on former Missouri governor Lilburn W. Boggs. While in isolation, he dictated reflections and blessings and further refined instructions for the practice of proxy baptisms.

One of the first documents in volume 10 is a notice dated May 11, 1842, that withdraws the fellowship of John C. Bennett due to sexual misconduct. Once a “rising star” in Nauvoo and an ally and supporter of Joseph Smith, Bennett undertook a campaign of slander and libel against the Prophet. His actions were detrimental to the Church and the town, Kuehn said. 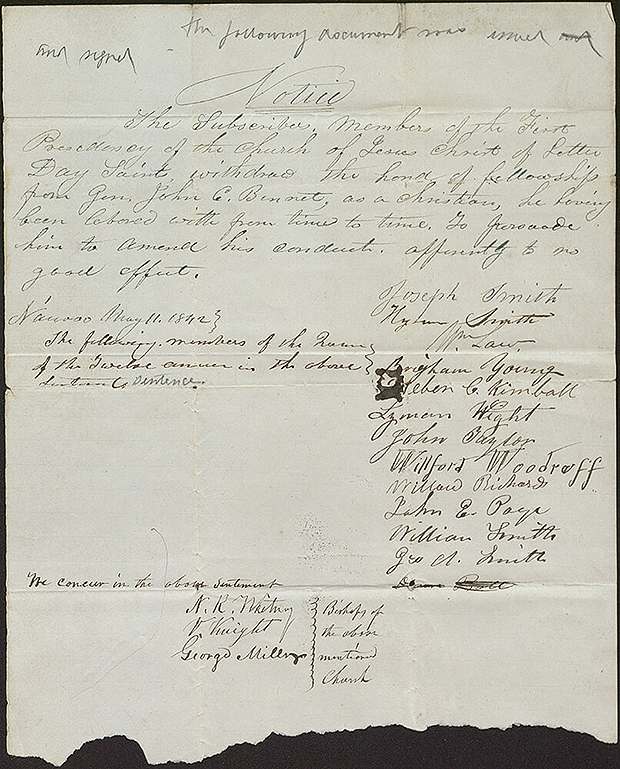 Notice, May 11, 1842. Willard Richards prepared this First Presidency notice that the Church was withdrawing fellowship from John C. Bennett. Over the next several days, members of the Quorum of the Twelve Apostles and the three bishops of Nauvoo, Illinois, signed the document. Richards signed it on behalf of Joseph Smith and three Apostles who may have not been present in Nauvoo at the time. Bennett called this notice a “MORMON BULL OF EXCOMMUNICATION.” It was published in the June 15, 1842, issue of the Times and Seasons. Photo courtesy of the JS Collection, Church History Library, Salt Lake City.

Several documents in volume 10 shed light on the financial and economic situation in Nauvoo in 1842. “You get a real sense that Nauvoo is an actual place, a city with real people,” Watkins said. “Sometimes perhaps we’ve thought of Nauvoo as this place set aside from the world, but it’s also very much part of that world. That’s pretty clear in volume 10.”

One example is locally printed currency titled Nauvoo City Scrip. This particular currency is dated July 14, 1842, and is signed by Joseph Smith as mayor. Kuehn said this currency was used by the Nauvoo City Council and to pay city workers. It was also used to pay taxes.

Another document in volume 10 is the typescript of a revelation dictated from Joseph Smith to Bishop Newel K. Whitney. The revelation, dated July 27, 1842, provided Whitney with the language to seal his 17-year-old daughter, Sarah Ann Whitney, to Joseph as a plural wife.

This is “the only known instance of an extant document dictated by Joseph Smith giving directions for plural marriage sealings,” according to the volume’s introduction.

A new feature on the Joseph Smith Papers website allows users to compare the manuscript of this revelation in unidentified handwriting with the typescript, Kuehn said.

Other noteworthy documents in the volume include a letter Joseph Smith wrote to the Whitneys in August 1842 shortly after the sealing took place and a poem written by Eliza R. Snow to Joseph.

Documents Volume 11: September 1842–February 1843 is scheduled to be released in October.