“Being able to make a name become real through pictures or conversations with existing family members who knew your ancestors intimately is a spiritual experience, and it makes you appreciate and recognize them.” —Sheiyenne Baloo, student

Summer heat, limited Wi-Fi access, and what could be described as the desert wilderness between the four corners of Arizona, Utah, Colorado, and New Mexico became the temporary reality and home of four students who participated in a FamilySearch pilot program to gather oral histories of Native Americans living in the Navajo Nation.

Students Hailee Roberts, Erwin Cly, Sheiyenne Baloo, and Sage Black spent four to seven weeks during July and August living among the people of the Navajo Nation, diving into native people’s pasts, and learning about the unique stories and traditions that have connected family members for generations.

Roberts, the team lead, remembers being approached while working at AIS to participate in the program. She saw it as an opportunity to focus on Native American genealogy in conjunction with her personal family history.

“I was able to take the time away from my current reality and instead go down and find out my own family history and traditions,” she said. “We were able to figure out who we are and know where our roots come from.”

Roberts’s enthusiasm to discover more about her and others’ family history was shared by the other students. She reached out to other AIS scholarship recipients about the opportunity to discover their family history within the Navajo Nation. Each student responded with resounding excitement and optimistic expectations, she said.

Their summer days consisted of conducting interviews with welcoming—but often skeptical—family members, researching and tracing family lines, gathering information from the limited resources available, and, above all, digitally recording everything they found into a FamilySearch account for their family members. Every person interviewed received a My Family: Stories That Bring Us Together booklet, available in either English or Navajo, to continue to record his or her family history.

Some students went the extra mile and prepared additional materials for families. For example, student researcher Cly created a binder of clan information, printed screenshots of pedigree charts that contained family tree information, and then handed them out to the family members he visited and gathered information from. Roberts said that Cly’s knowledge of the area and the people was a huge help to other students.

Baloo, who is a member of The Church of Jesus Christ of Latter-day Saints, stayed with her aunt in the land where the rest of her family grew up—Rock Point, Arizona. She also interviewed members of her family in other places such as Pine Springs, Arizona; Gallup, New Mexico; and Kirtland, New Mexico. She recalled spending long afternoons at the Navajo Nation library looking through old newspaper copies to find photos of the families she’d just interviewed. She would then spend hours uploading these photos into the FamilySearch account she had created. In one instance, she found her grandfather in one of the newspapers stored in the library’s archive. 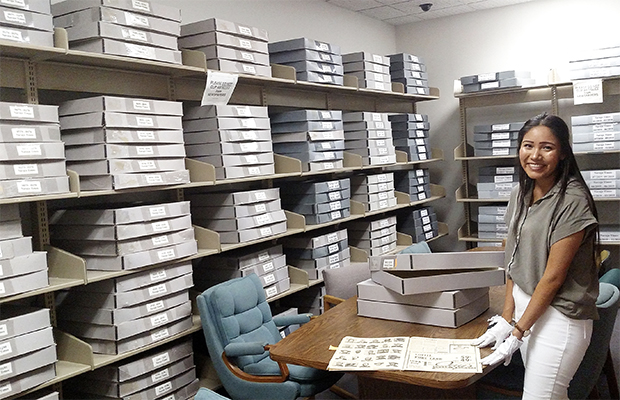 FamilySearch operational manager D. Michael Hansen provided training and direction for the students during the pilot. In addition to the students gathering their personal family history, Hansen said that their work was a vital contribution to the gathering and preserving of oral histories of the Native American people in their entirety. Above all, Hansen was proud of the time and effort the students were willing to commit to the program.

“This has been the most amazing project for me to be a part of,” he said.

Baloo said her overall gathering experience felt “really special and spiritually uplifting,” especially considering similar experiences she had while serving a mission for The Church of Jesus Christ of Latter-day Saints just a couple years prior.

“Being able to make a name become real through pictures or conversations with existing family members who knew your ancestors intimately is a spiritual experience, and it makes you appreciate and recognize them,” she said.

Black, who is also a Latter-day Saint, said she connected with many of her ancestors, even though she had never fully understood which Native American lines her family tree extended from. She said that her own testimony grew as she recalled many interviews that ended with native people sharing their testimony of Jesus Christ—often as a future message for their descendants.

“Hearing their testimonies and their stories time after time, it just really, really touched me,” she said. “Family trees are so much more than just names. You can actually paint a picture of someone and understand what their life was like.”

The students also had the opportunity to train others in their oral history work so it could continue beyond the pilot program’s conclusion. Hansen said this was vital for continuing the work of preserving the Navajo Nation’s records and oral histories.

“We have these four amazing students who are mountain movers,” he said. “They trailblazed this program for everyone else who is going to come after them. The experiences that they had this summer are going to stick with them forever. The communities where they lived are going to remember them forever.”

The end goal for the pilot was to develop a process that can be replicated and scaled to successfully gather the oral genealogies and family narratives for elderly Native Americans in the 567 tribes in the United States and Canada. The students created 80 new FamilySearch accounts for Church members in the Navajo Nation by the time they left. 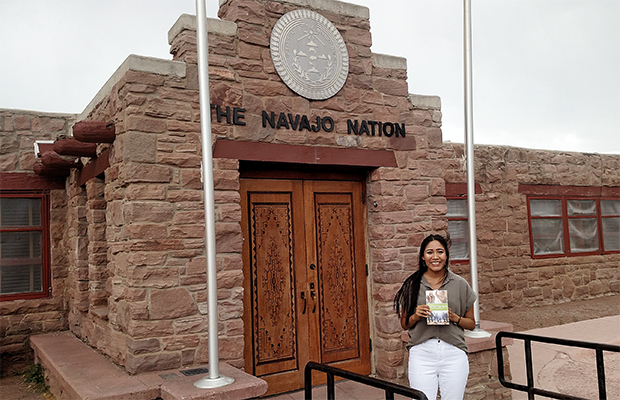 Sheiyenne Baloo holds a My Family: Stories That Bring Us Together booklet in front of the main office at the capital of the Navajo Nation—Window Rock, Arizona. Each family member the students interviewed received a booklet. Photo courtesy of Sheiyenne Baloo.

Despite the major challenges that came with life on the reservation—such as searching for available Wi-Fi, getting stuck in sandy roads, and finding people to talk to on the street—Hansen said each of the students persevered. He said they gained valuable experiences that will continue to strengthen them throughout their lives.

After each interview, many students said, they immediately felt connected to the community and possessed a greater understanding of the people.

Baloo said she was full of Christlike love for the family she came to know after this experience—promising she would never forget them. “These people feel forgotten, so I wanted to help them understand that their story matters and that they are individually loved and recognized.” 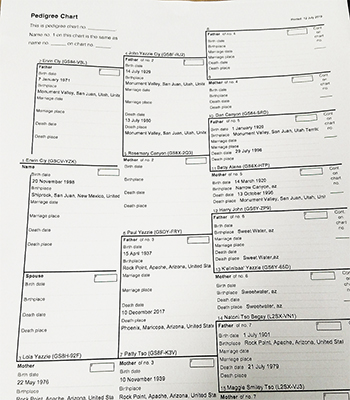 A pedigree chart of a Native American family in the Navajo Nation. Erwin Cly took screenshots of family pedigree charts, printed them, and handed them out to the families he had gathered information from. Photo courtesy of Erwin Cly. 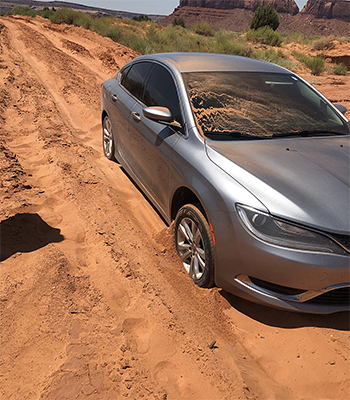 Erwin Cly’s vehicle gets stuck in the sand while traveling to the reservation. The students used their personal transportation to get from one location to the next, regularly enduring high temperatures and sandy roads. Photo courtesy of D. Michael Hansen. 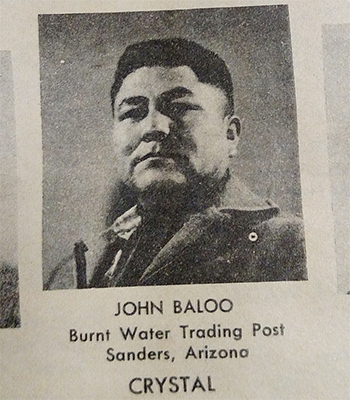 A historical photo of John Baloo, Sheiyenne Baloo’s grandfather, whom she found while searching the archives at the Navajo Nation Library. Photo courtesy of Sheiyenne Baloo. 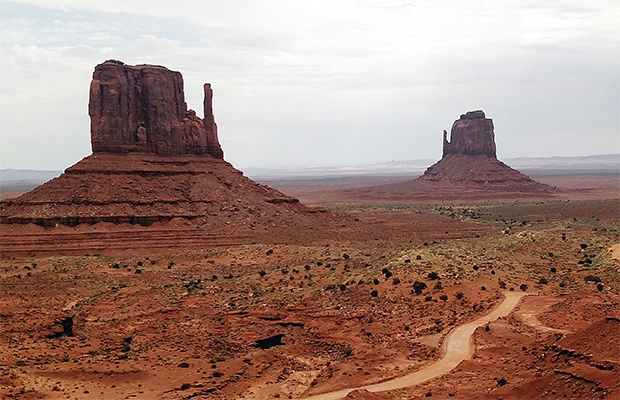 The view of Monument Valley from the Navajo Tribal Park. Photo courtesy of D. Michael Hansen. 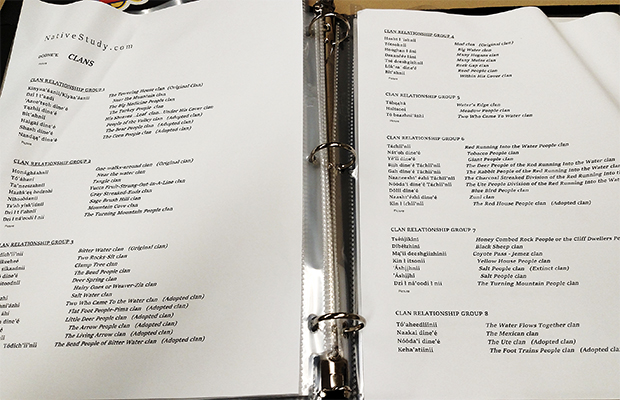 A binder of clan information that Erwin Cly gathered during the seven weeks that he lived among the Native Americans of the Navajo Nation and gathered their oral histories. Photo courtesy of Erwin Cly. 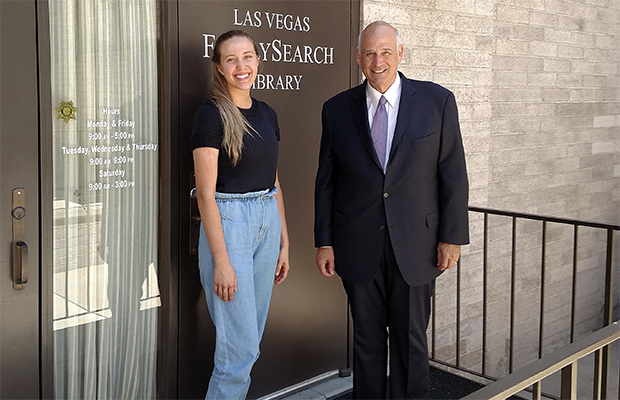