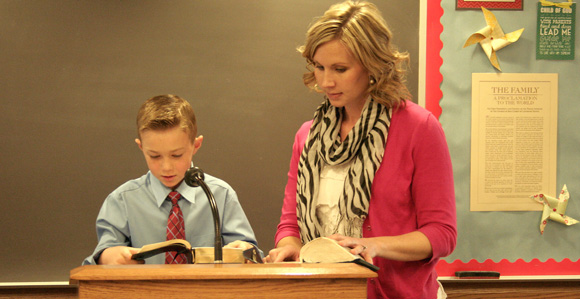 A Primary child reads a scripture during sharing time on January 5. During the meeting, Primary leaders introduced the 2013 sharing time theme: “I Am a Child of God.” The Primary general presidency hopes every child comes to know that truth this year.

“The message from our Heavenly Father is clear—we are His children.” —Sister Rosemary M. Wixom, Primary general president

The Primary general presidency wants every child in the Church to know that he or she is a child of God.

This simple truth—which will guide Primary children on the path back to their Heavenly Father—is the theme of the 2013 Outline for Sharing Time.

“We may sing the song ‘I Am a Child of God’ while we are young, yet the words of that song stay with us. We relearn that truth at different times in our lives,” said Sister Rosemary M. Wixom, Primary general president. “Even as an adult the reality that we are a child of God brings immense feelings of love and comfort—as if there were a slight parting of the veil and we remember who we really are.”

Sister Wixom and her counselors, Sister Jean A. Stevens and Sister Cheryl A. Esplin, met with the Church News to discuss the 2013 theme and why it is important for Primary children and their families.

“We want every child to know they are a child of God, to be grateful, and to live accordingly,” said Sister Wixom, calling the theme a “beautiful truth and powerful message.”

That will happen as children study their divine identity, purpose, and potential, Sister Stevens said. “As children come to better understand their identity, they will come to more fully comprehend their purpose in life and their potential to become like Heavenly Father and His Son, Jesus Christ,” said Sister Esplin.

Sister Stevens said Primary leaders can support parents in helping children increase their faith in Jesus Christ and their testimony of their Heavenly Father’s plan. These powerful messages will resonate in their hearts and guide them into the future, she explained. They will give them a sense of belonging.

“As His spirit children, we are now on this earth walking a path back to Him,” explained Sister Wixom. “To know that truth—that we are His children—helps us stay on the path. The adversary wants to confuse us about our identity. The message from our Heavenly Father is clear—we are His children.”

Sister Esplin said it is a message that is most effectively taught with love.

Children understand God’s love best, she explained, “as they experience love from their parents and others.”

Quoting Elder Quentin L. Cook of the Quorum of the Twelve, Sister Esplin explained that “our mortal pedigree charts show many generations winding backward throughout the ages. Our individual spiritual pedigree chart, however, has only two generations—our Father’s and ours.”

Quoting “The Family: A Proclamation to the World,” Sister Wixom said the family is central to the Creator’s plan for the eternal destiny of His children. “We are part of His family,” she explained. “We are His spirit children.”

Children are often taught that because He is their Father, God loves His children, said Sister Esplin. But she hopes they will also realize that “because I am a child of God, I love Him.”

Sister Wixom said that this knowledge will change a child’s actions.

“Our message is for a child to not only know that he or she is a child of God, but also to understand that with that knowledge comes responsibility,” said Sister Wixom, noting that children should grow up reminding themselves that “because I am a child of God,” it will influence their thoughts and actions.

Sister Esplin added, “The knowledge of that truth changes how you feel about yourself and how you act.”

Sister Stevens said the song “If the Savior Stood Beside Me,” by Sally DeFord, is printed in the back of the sharing time outline and will help children remember their responsibility as a child of God.

“If the Savior stood beside me, would I do the things I do? Would I think of His commandments and try harder to be true? Would I follow His example? Would I live more righteously if I could see the Savior standing nigh, watching over me?” she said, quoting the first verse of the song.

The song “I Am a Child of God,” for example, causes “spiritual feelings” in any language, Sister Wixom said.

She explained that as Primary leaders prepare for sharing time each week they should ask themselves two questions: “What will the children do to learn? How can I help them feel the Spirit?”

The Primary general presidency expressed “gratitude for Primary leaders everywhere as they prayerfully prepare for sharing time each week. It is through their love that each child may come to know, ‘I am a child of God.’”