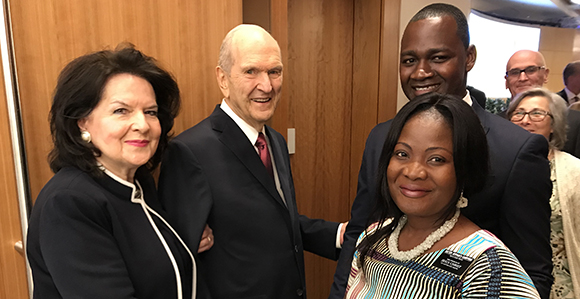 “I hope that you will know and teach the pure doctrine of Christ, enjoy and provide blessings of the priesthood, help to gather Israel, and prepare the world for the Second Coming.” —President Russell M. Nelson

As he looked across a sea of faces at the start of the 2018 Mission Leadership Seminar, President Russell M. Nelson acknowledged the hopes of new mission presidents and wives that the President of the Church might say something helpful as they begin their new assignments.

President Nelson’s help came in the form of his own hopes.

“These are the hopes of my heart for you, my beloved presidents and sisters,” he said. “I have fond hopes for your marriages, your families, your missionaries, your local leaders, and members who will look up to you. And I hope that you will know and teach the pure doctrine of Christ, enjoy and provide blessings of the priesthood, help to gather Israel, and prepare the world for the Second Coming.”

His sacrament meeting remarks on Sunday, June 24, began the three-day seminar at the Provo Missionary Training Center. The congregation included 112 couples of new mission presidents and their wives, hailing from 23 countries and set to preside worldwide in missions ranging from Argentina to Zimbabwe.

Joining President Nelson was his wife, Sister Wendy Nelson, whom he acknowledged in his remarks, as well as the entire First Presidency and Quorum of the Twelve Apostles and their wives. Also attending were the Presidency of the Seventy, many General Authority Seventies, General Auxiliary Presidencies, and Missionary Department staff and their respective spouses.

Saying “your highest personal priority is your spouse,” President Nelson encouraged the mission leadership couples to keep as close as possible to children and grandchildren and—despite great distances—let them understand and appreciate mission service and leadership.

“Loyalty to the Lord and love for your family are not competitive commitments! They are synergistic!” he said with emphasis, adding, “An eternal family is the end for which we are all striving. We are building eternal families. That cannot happen without the Church and its sacred ordinances and covenants. The Church is the means to that end.”

Calling missionaries “the lifeblood of the next generation” and the future leaders of the Church, President Nelson encouraged the new leaders to help them be obedient to the laws of God and man.

“If they do so, they will be protected, both physically and spiritually,” he said. “Teach them that in spite of their ever-present risks, they will be much safer than will be their classmates and colleagues who were not called on missions—a mission is the safest place on the earth for them at this time.”

President Nelson reminded the new leaders that their missionaries will watch and learn from their words and actions, that each missionary should have at least one convert—himself or herself—and that the leaders’ lifelong influence continues long after missionaries have returned home.

“That progress in crescendo—that multigenerational dimension—is the ultimate metric by which your sacred work will be measured,” he said. “Your success may be determined by how many grandchildren of your missionaries will be blessed by the ordinances and covenants of the temple.”

President Nelson said his hope was for new mission presidents and their wives to love life and inspire the local leaders and members.

“Your ability to link the enthusiasm of the missionaries with the loving stability and helpful efforts of the members cannot be overemphasized,” he said. “In fact, your success will be multiplied exponentially as you harness the power of members with whom you serve.”

A missionary’s best friends in the local unit are the ward or branch mission leader and the ward or branch temple and family history consultant, he added. The former helps missionaries get more meaningful teaching opportunities, and the latter to help people new to the Church to learn names of ancestors, “many of whom are yearning—even desperate—for the exalting ordinances of the gospel to be done for them by their living posterity.”

The doctrine of Christ

Spending more time on this “hope” than the others, President Nelson said the best way to learn the doctrine of Christ is to teach it.

He reviewed God’s purpose—to bring to pass the immortality and eternal life of His children—and the blessings of the Atonement of Jesus Christ. The unconditional gift to each individual is the resurrection after death, while the conditional gift—based on obedience to essential ordinances and covenants—is the possibility of eternal life.

President Nelson asked that missionaries and members call the Church by its correct name. “It is not the Mormon Church. It is not the LDS Church. By divine decree, it is The Church of Jesus Christ of Latter-day Saints.”

He reminded the new mission leaders of “two overarching and imperative promises” of Heavenly Father and His Beloved Son which have yet to be fulfilled: the latter-day gathering of scattered Israel and the return of Jesus Christ again to the earth.

“It is our glorious privilege and sacred responsibility as missionaries to assist in preparing the world for these two yet-to-be-fulfilled promised,” he said.

“The Book of Mormon is the instrument by which the promised gathering of Israel will be accomplished—it was written for our day,” he said, adding that it is also “the tangible and irrefutable evidence that Joseph Smith is the prophet of this last dispensation—the dispensation of the fulness of times, the dispensation when the world is to be prepared for the Second Coming of the Lord Jesus Christ.”

One cannot speak of God without being reminded about the Holy Ghost—“the true teacher,” President Nelson said. “No true conversion takes place without the testifying, confirming, and comforting influence of the Holy Ghost.”

Blessings of the priesthood

President Nelson said the priesthood was restored so that ordinances essential to salvation and exaltation are performed with proper authority.

“Goodness alone is not sufficient to qualify for God’s greatest blessings for His sons and daughters,” he said. “Priesthood ordinances are required.”

He concluded his remarks by using his priesthood authority to invoke a blessing on the presidents and their wives—of health, strength, and safety; of success in the ministry; of health and healing for family members and their drawing closer to God through the couple’s upcoming mission service; and of sacred influences on missionaries, members, and communities.

And at the conclusion of the meeting, the First Presidency asked to shake the hands of all new mission leadership couples.