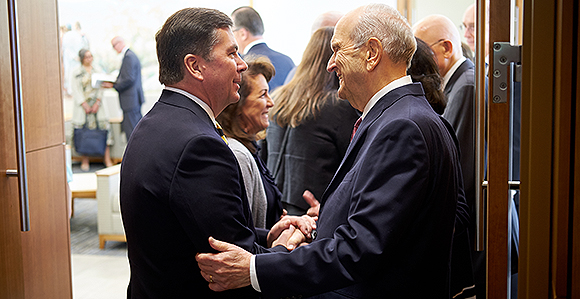 Editor’s note: A list of articles about messages given at the 2018 Mission Leadership Seminar by members of the First Presidency and Quorum of the Twelve Apostles appears at the end of this article and will be updated as additional articles are published in the coming weeks.

A new name. A shortened schedule. And all sorts of new looks, updates, and extended involvement from the senior Brethren. Such was the 2018 Mission Leadership Seminar, which ran Sunday through Tuesday, June 24–26, at the Provo Missionary Training Center.

Previously known as the seminar for new mission presidents and running several days longer, this year’s version was presented to the 112 couples of new presidents and wives, hailing from 23 countries and set to preside worldwide in missions ranging from Argentina to Zimbabwe beginning in early July.

Speaking in the seminar-opening Sunday morning sacrament meeting, President Nelson acknowledged that mission leaders might hope that he say something helpful as they begin their new assignments—and he responded with his own hopes for them.

“These are the hopes of my heart for you, my beloved presidents and sisters,” he said. “I have fond hopes for your marriages, your families, your missionaries, your local leaders, and members who will look up to you. And I hope that you will know and teach the pure doctrine of Christ, enjoy and provide blessings of the priesthood, help to gather Israel, and prepare the world for the Second Coming.” (See related article.)

Much to the delight of participants, President Nelson asked if the First Presidency and their wives could personally greet and shake the hands of the 112 couples in the break after the sacrament meeting.

“My heart almost stopped—it was an experience I will never forget,” said President Fernando Souza, who with his wife, Sister Miriam Souza, will serve in the Brazil Porto Alegre South Mission.

President Jimmy Carter Okot, who with his wife, Sister Lindiwe Amanda Okot, will preside over the Zimbabwe Bulawayo Mission, agreed. “It was the greatest feeling and blessing that we have had throughout our lives,” he told the Church News. 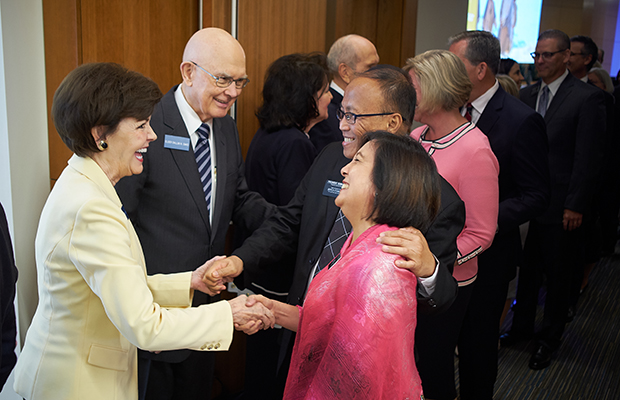 President Dallin H. Oaks of the First Presidency and his wife, Sister Kristen Oaks, greet new mission presidents and their wives during the Mission Leadership Seminar held in the Provo MTC June 24–26.

The First Presidency and their wives returned the next two mornings as President Oaks and President Eyring spoke to lead off the June 25 and 26 days, respectively.

The entire Quorum of the Twelve Apostles attended the seminar’s three days, with the Apostles participating by offering addresses or leading break-out sessions. Also attending the sessions were the wives of the Twelve, other General Authorities and General Auxiliary Presidency members and their spouses, and Missionary Department staff.

“The fact that the First Presidency was here and all the Apostles tell us that this is the greatest work in the Church—and we’re privileged to be a part of it,” said Sister Julie A. Thompson, who will join her husband, President Michael A. Thompson, in the Washington Spokane Mission. 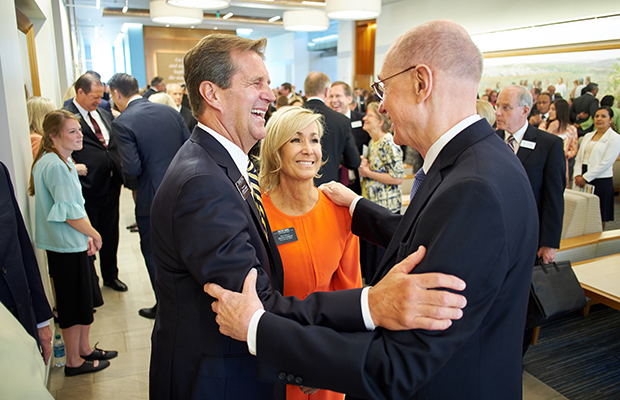 President Henry B. Eyring of the First Presidency greets new mission presidents and their wives during the Mission Leadership Seminar held in the Provo MTC June 24–26.

Elder Dieter F. Uchtdorf of the Quorum of the Twelve Apostles—who also chairs the Missionary Executive Council—spoke on both the opening and closing days, taking his expected aviation references in talks to a higher level as he described the countdown and lift off of a space shuttle. (See related story.)

“Can you imagine the experience of being on the space shuttle Discovery during its countdown and lift off?” he asked. “Of course you can, because you are on the missionary training center launch pad right now.

“The excitement has been increasing during this seminar, the countdown for your launch is almost over, and you will soon be on your way to a new adventure of discovery, wonder, awe, and missionary labors!”

Said President Thompson, days away from starting his three-year service in Spokane: “We take it with great faith. We’ve been taught well—now we just go and execute. We follow the Spirit, and the Lord will bless us.”

Elder Christofferson, Elder Andersen, and Elder Soares were among those who presented at the seminar. The sessions were recorded and will be available for use for currently serving mission presidents and wives as well.

Addressing the new mission leaders just two days after the First Presidency announced an update for Preach My Gospel: A Guide to Missionary Service, Elder Nielson called the missionary guide “amazing.” All members and missionaries will gain “a greater testimony of its importance” as they use this “powerful tool,” he said, adding, “This document has come from heaven.”

Sister Cordon told the mission leaders that they have been individually prepared to do the Lord’s work.

“We have been called to share a message of great joy—to gather Israel,” she said, adding, “You will be an instrument in the Lord’s hand to bring families unto Christ.”