Elder Neil L. Andersen of the Quorum of the Twelve Apostles speaks during the Mission Leadership Seminar at the Provo Missionary Training Center on June 25, 2018.

“Purposefully returning to God, honestly repenting, and feeling the love of the Savior through the gift of forgiveness … is vital to future faithfulness and more complete conversion.” —Elder Neil L. Andersen of the Quorum of the Twelve Apostles

Teaching repentance today is more important than ever, as the ways of the world increasingly diverge from the commandments of God, said Elder Neil L. Andersen of the Quorum of the Twelve Apostles.

“Repentance is not the backup plan; it is the plan,” said Elder Andersen, a member of the Church’s Missionary Executive Council, during the 2018 Mission Leadership Seminar on June 25. “Since our premortal experience, the Lord has known that we would need to repent.”

Addressing the topic “Teaching Repentance: The Powerful Combination of the Scriptures and Preach My Gospel,” Elder Andersen said deep conversion for the new convert to The Church of Jesus Christ of Latter-day Saints is only beginning at baptism. “Purposefully returning to God, honestly repenting, and feeling the love of the Savior through the gift of forgiveness before baptism brings the spiritual discovery alive in the life of the advancing convert and is vital to future faithfulness and more complete conversion.”

During the seminar 112 couples from 23 countries received counsel and direction from senior Church leaders before setting out to lead missions worldwide in early July.

Elder Andersen began his remarks by reminding the new mission presidents and their companions of the first words on page 1 of Preach My Gospel: “What Is My Purpose as a Missionary?”

The answer, he said, is cemented in the minds of all missionaries: “Your Purpose: Invite others to come unto Christ by helping them receive the restored gospel through faith in Jesus Christ and His Atonement, repentance, baptism, receiving the gift of the Holy Ghost, and enduring to the end.”

“It is not by chance that these are the first words of this very inspired book,” said Elder Andersen.

During his remarks, Elder Andersen said missionaries should focus on finding those to hear their message and “teaching powerfully the doctrine of repentance.”

The doctrine of repentance through Jesus Christ is clearly taught in Preach My Gospel, he said. “Our faith in Christ and our love for Him lead us to repent, or to change our thoughts, beliefs, and behaviors that are not in harmony with His will. Repentance includes forming a fresh view of God, ourselves, and the world,” quoted Elder Andersen.

The Lord puts a very high premium on teaching repentance, he added.

“As Jesus began His mortal ministry, His first words, according to Matthew, were, ‘Repent: for the kingdom of heaven is at hand’ (Matthew 4:17).”

In this dispensation, the Lord, after declaring that a marvelous work was about to come forth, told Oliver Cowdery and Joseph Smith: “Say nothing but repentance unto this generation” (Doctrine and Covenants 6:9).

Since the premortal experience, the Lord has known that His children would need to repent, said Elder Andersen.

Repentance must hold its proper weight among the other pillars of conversion—faith in Jesus Christ and His Atonement and baptism. “For those beginning or reigniting their spiritual discovery, these three pillars stand together,” said Elder Andersen.

Missionaries should not move too quickly from faith in Jesus Christ to baptism, diminishing the doctrine of repentance and circumventing this most important part of conversion to Christ and His restored gospel, said Elder Andersen. “For each person, the repentance is individual, but it is universally necessary.”

Some incorrectly believe that teaching repentance will slow down baptisms, he said. But “as people truly repent, faith increases, and the desire to be baptized is the natural result.”

Missionaries will find their power to teach repentance will increase as they experience for themselves the divine gift of forgiveness, he said. “As missionaries learn how to feel the cleansing power of the Atonement of the Lord Jesus Christ in their own lives, both their desire and their ability to help others greatly multiplies.”

There is “something beautiful that comes upon the soul of an honest and seeking person as the full purpose of this life is understood and the need for the Savior comes powerfully into focus,” said Elder Andersen. “The commandments have greater importance as the plan of redemption is understood.”

One of the important gifts of Preach My Gospel is not only the doctrines clearly explained, but the important scriptures that connect the word of the Lord directly to the principles being taught, continued Elder Andersen. “The narrative and scriptures together are a delicious combination for you and your missionaries as you feast upon the words of God and desire to teach the doctrine of repentance.”

Repentance, however, is not only changing behavior. “Sometimes, missionaries will teach repentance with a check-the-box approach—rather than teaching a process as the scriptures teach of doing ‘all … in the name of the Son, … repent[ing] and call[ing] upon God in the name of the Son forevermore’ (Moses 5:8),” he said. “Missionaries will sometimes overly teach that beginning to pray, keep the commandments, and come to church are the steps of repentance, and they are—but they will under-teach the need to call upon the Father for the atoning grace of His Son.”

Repentance is not only change; it is redemption, said Elder Andersen. “There must be a deep, spiritual appeal for the divine power of the Son of God to lift the burden of pain and guilt.”

Missionaries should teach the doctrine of repentance, even if someone’s desire to be baptized is not immediately evident. “Helping someone to return to a greater love for God and for His commandments is always a good idea. At times when a returned missionary wants to tell me how few persons he baptized, I like to ask him how many he kindly invited to repent. The eternal results and heavenly rewards of his service are ahead of him.”

His message of repentance had touched the baby’s family, and after he left France, they joined the Church.

“As our missionaries firmly help others begin the conversion process, those they teach will, in their private chambers, cry out to their Heavenly Father for mercy, pleading for the power of the Atonement of our Savior to bring a remission of their sins and peace to their souls,” said Elder Andersen. “To cause a person they are teaching to go to his or her knees, to pray with enormous faith, asking for forgiveness, hours after they, the missionaries, have departed, requires teaching with spiritual conviction and the gift of the Holy Ghost.” 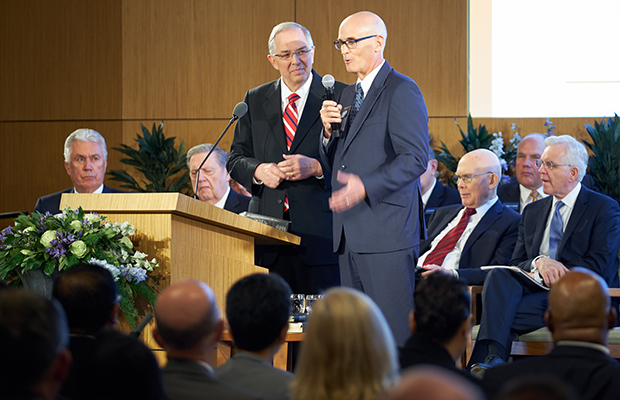 Elder Neil L. Andersen of the Quorum of the Twelve Apostles invites President J. Benoit Duquette, who will serve as president of the Vanuatu Port Vila Mission, to share a missionary experience during the Mission Leadership Seminar at the Provo Missionary Training Center on June 25, 2018.