“I can see now, written in personal journals across the Pacific, ‘Today, I saw President Nelson and had confirmed within me by the Holy Ghost that he is the living prophet of God. I felt his love for me.’” —Elder Ian S. Ardern of the Seventy

Kicking off the tour with a Thursday, May 16, devotional in Kona Hawaii, President Nelson and his wife, Sister Wendy Nelson—traveling with Elder Gerrit W. Gong of the Quorum of the Twelve Apostles and his wife, Sister Susan Gong—will visit Apia, Samoa; Sydney, Australia; Wellington and Auckland, New Zealand; Suva, Fiji; Nuku’alofa, Tonga; and Papeete, Tahiti.

“Members in these isles of the sea are full of faith,” said Elder O. Vincent Haleck, a General Authority Seventy and President of the Church’s Pacific Area. “The gospel gives them and their families a vision of who they are and who they can become. … They will go the extra mile and give their best to extend their hospitality to guests who come to their villages and homes.”

The Church of Jesus Christ of Latter-day Saints has a rich history in the “Isles of the Sea,” where in 1843, the Prophet Joseph Smith sent missionaries. Their converts numbered in the hundreds.

“Three years before the Saints arrived in the Salt Lake Valley, there was a branch of the Church in Sydney, Australia, which speaks of the longevity of the Church there,” said Elder Ian S. Ardern, a General Authority Seventy and a member of the Pacific Area Presidency. “The first missionaries of The Church of Jesus Christ of Latter-day Saints arrived in New Zealand in 1854, two years before the handcart companies made their way to Salt Lake City.”

The gospel took root in the Pacific, growing in both numbers and strength, said Elder Ardern, who is from New Zealand.

Tonga, where 60 percent of the population is comprised of Latter-day Saints, has the highest percent of Church membership of any nation on earth.

Almost a half-million members live in the region, belonging to more than 100 stakes. And 10 temples dot the area map, stretching from Perth, Australia, to Papeete, Tahiti, with additional temples announced for American Samoa, Tonga, Guam, and New Zealand.

“The presence of the Church is a tribute to those early missionaries who answered the call, gave their lives, and made great sacrifices to leave their families and travel great distances taking months and years to bring the message of the restored gospel to our ancestors,” said Elder Haleck.

Elder Haleck, who was born in Utulei, American Samoa, said President Nelson’s Pacific tour is an indication that “the Lord knows and loves his children who live upon the ‘Isles of the Sea.’”

Elder Ardern said Latter-day Saints in the Pacific come from a wide cultural and socio-economic diversity but are one.

“The Saints of the Pacific love President Nelson, they pray for him individually and as families, they listen to him via the internet and read his counsel in the Ensign and Liahona and now many will get to see him in person,” he said. “This experience will become a lifelong memory for them. I can see now, written in personal journals across the Pacific, ‘Today, I saw President Nelson and had confirmed within me by the Holy Ghost that he is the living prophet of God. I felt his love for me.’”

People of “inherent spirituality,” Polynesian and Melanesian Latter-day Saints “have a deep and abiding love for the Savior,” said Elder Nattress. “This is seen in their beautiful music, in their beautiful families, and in their faithfulness.” 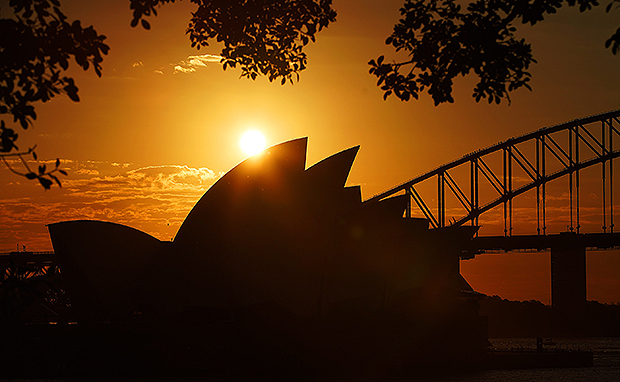 The iconic Sydney Harbor Bridge and Sydney Opera House are highlighted by the evening sunset on May 17, 2019, in Sydney, Australia. President Russell M. Nelson, with his wife Sister Wendy Nelson, will visit the city on his nine-day, seven-nation Pacific Ministry Tour. Photo by Jeffrey D. Allred, Deseret News.