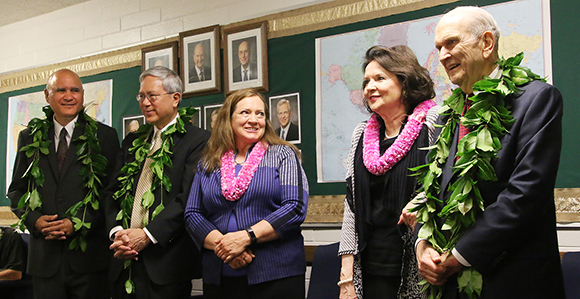 From right to left, President Russell M. Nelson, Sister Wendy Nelson, Sister Susan Gong, Elder Gerrit W. Gong of the Quorum of the Twelve Apostles, and Elder Aley K. Auna Jr., an Area Seventy, greet community leaders during a reception prior to the May 16, 2019, devotional in the Kona Hawaii Stake Center. Photo by Mike Foley.

“Jesus is the Christ. This is His Church restored in these latter days to accomplish its great purpose, the gathering of Israel and having those families of gathered Israel sealed in the temple in preparing the world for the second coming of the Lord.” —President Russell M. Nelson

Now in his “10th decade of life,” President Russell M. Nelson of The Church of Jesus Christ of Latter-day Saints shared 10 spiritual truths he has learned and left an apostolic blessing on the approximately 1,200 people—Latter-day Saints, community leaders, and an interfaith Tongan choir—attending the first stop of his current Pacific ministry tour.

After tracing some of the highlights of his large family, professional medical career, and long life, President Nelson shared ten things he has learned:

2. “Jesus is the Christ, the Beloved Son of His Heavenly Father. He came into the world to do the will of His Father. He was lifted up on the cross, and that would be the way of granting for us immortality. Because of the Atonement of Jesus Christ, every one of us will be resurrected from the grave.”

3. “We are created in the image of our Father and of His Son,” President Nelson continued. Drawing examples from his career as a cardiac surgeon, he pointed out the body can heal and regulate itself. “It’s guaranteed. It’s God’s gift to us.”

4. “God communicates with His children on the earth through prophets. This has been the method of instruction from the time of Adam,” he said, listing other prophets as well. “Joseph Smith is the prophet of this dispensation.”

“Ours is unique,” he said, explaining the others all ended in apostasy. “This dispensation will not end in apostasy, and it will fill the earth.”

5. “The scriptures are true,” he said. “They comprise a rich reservoir of divine doctrine.”

7. “Satan is allowed to function … and I’ve learned that if you want to be miserable, follow Satan’s ways. If you want to have joy in life, follow the Savior’s way.”

8. “The youth of Zion today are a chosen generation,” President Nelson said. “Before these young people in today’s generation were born, they received their first lessons in the world of spirits. They were prepared to come forth in the due time of the Lord to labor in His vineyard for the salvation and souls of men.”

10. “Salvation is an individual matter. Exaltation is a little more, it is a family matter,” including the sealing in the temple, “and when death comes, you have the assurance of knowing that it is temporary.”

In leading to his apostolic blessing, President Nelson said, “Bless you, my beloved brothers and sisters in Hawaii. You are the Lord’s choicest children. He loves you and wants you to be happy.”

He then blessed the congregation that they would desire to feast on the Lord’s words, have success in their occupational and educational endeavors, and have love at home and no contention, among several other things.

“And I bless you with my testimony that God lives. Jesus is the Christ. This is His Church restored in these latter days to accomplish its great purpose, the gathering of Israel; and having those families of gathered Israel sealed in the temple in preparing the world for the Second Coming of the Lord.” 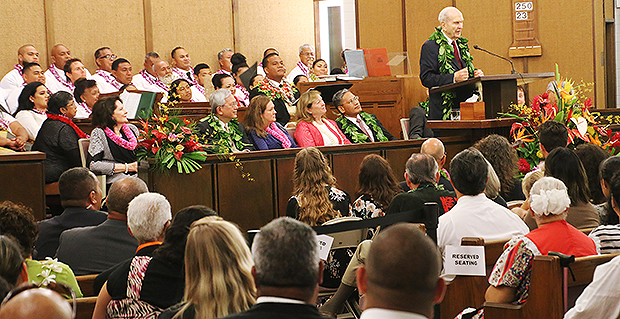 President Russell M. Nelson addresses a capacity crowd in the Kona Hawaii Stake Center on May 16, 2019, on the first stop on his nine-day Pacific ministry tour. Photo by Mike Foley.

Earlier in the devotional, Sister Nelson charmed the Kona saints by telling how her grandparents served as missionaries on the island of Kauai and how their love led her to attend the University of Hawaii in Honolulu. She also spoke of the need for individuals to eliminate contention from their lives.

Elder Gong spoke of the impact President Nelson’s calling has had for greater emphasis on the worldwide use of the Church’s official name—The Church of Jesus Christ of Latter-day Saints.

Sister Gong explained her husband’s family ties to Hawaii. She then asked the question: How do you say “thank you” to your ancestors? Learn and record their stories, she said. Live good lives. Walk in truth, and bring temple blessings to them.

A Tongan interfaith choir sings one of its several numbers performed during President Russell M. Nelson’s devotional in the Kona Hawaii Stake Center on May 16, 2019. Photo by Mike Foley.

As the prophet and party left the stake center, the members sang “Aloha Oe,” the traditional Hawaiian farewell song.

Earl Veloria, a member of Kohala Ward and a former president of the Kona Hawaii Temple, said of President Nelson’s visit: “His message really touched home because he knows how to reach people. He also shared things about Hawaii that makes us feel warm. Of course, he also reminds us of the promises we need to keep.”

Audrey Veloria, his wife, added: “He told the simple pure truths of the gospel. It was like Christ the Savior was standing before us in old Hawaii, calling us the House of Israel and letting us know of his great love for the people of the isles of the sea. I am so grateful he came.”

Faith Meyer Bean, a member of the Holualoa Ward, described the devotional as a “blessing—it was wonderful and so inspirational.”

Her husband, Joseph Bean, added that the devotional was the first time he had seen the prophet in person, as did Elder Benjamin Shupe, a recently arrived full-time missionary from Chandler, Arizona.

Another missionary, Elder Samuel Bass from Bluffdale, Utah, said, “I definitely felt the Spirit, and I thought it was interesting how President Nelson broke everything down into 10 points of what everyone should know, including nonmembers.” 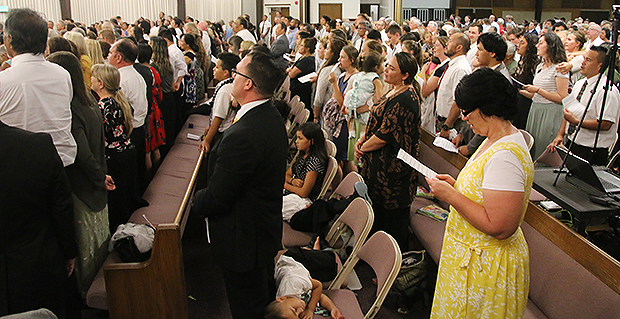 Approximately 1,200 Latter-day Saints, community leaders, and a Tongan interfaith choir sing during a May 16, 2019, devotional at the Kona Hawaii Stake Center with President Russell M. Nelson; his wife, Sister Wendy Nelson; Elder Gerrit W. Gong of the Quorum of the Twelve Apostles; and his wife, Sister Susan Gong. Photo by Mike Foley.