Nine “Faith-Filled” LDSBC Students Share about Faith in Jesus Christ, Agency, and the Book of Mormon

Josh Trimble answers a question during an LDS Business College devotional held in the Assembly Hall at Temple Square on January 14, 2020. Photo by Valerie Johnson.

“The gospel, as we strive to live it, may not seem so simple, but things that we can experience in our lives are powerful as we do so.” —Bruce C. Kusch, LDS Business College president

Faith to bear Christ’s name and faith to act on answers to prayers were the themes of messages shared during the first LDS Business College devotional of the spring semester.

On January 14, President Bruce C. Kusch and his wife, Sister Alynda Kusch, spoke to students gathered in the Assembly Hall on Temple Square about the principles found in a “simple but powerful” Primary song and the miracle of a quilt walk.

At the beginning of his remarks, President Kusch invited the LDSBC Choir, led by Rick Decker, to perform the Primary song “The Church of Jesus Christ.”

At this point, President Kusch asked for nine “faith-filled” volunteers to answer a question relating to each of the declarations of this song.

Within a few moments, these nine students lined up behind a microphone in both aisles of the Assembly Hall. 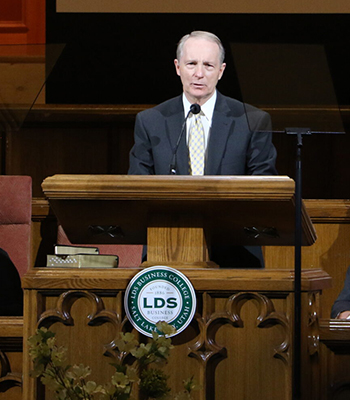 President Kusch reiterated President Russell M. Nelson’s charge for members to use the full and correct name of the Church, then asked the student, “How can following President Nelson’s counsel help us have the Savior as the central focus of our lives that we might be the recipients of the power and blessings he promises?”

Jessica Myers responded that by remembering to use Christ’s name in all things, “we’re reminded that He is the center.” When His name is left out, He is forgotten.

“I’ve seen that in my own life—just remembering to say the name ‘Jesus Christ’ has brought Him more into my life.”

Jessica Myers answers a question during an LDS Business College devotional held in the Assembly Hall at Temple Square on January 14, 2020. Photo by Valerie Johnson.

God is the Father of each person’s spirit, and His children are made in His likeness and image, President Kusch taught. “What has helped you remember that you are truly a child of God—especially in moments of doubt and difficulty?”

Rebecca Both said teaching people on her mission who they are “really had to make me think of who I was and that I was doing His work. That definitely [helped me] feel that comfort that He loves me and was wanting me to be able to go and share that knowledge with others.” 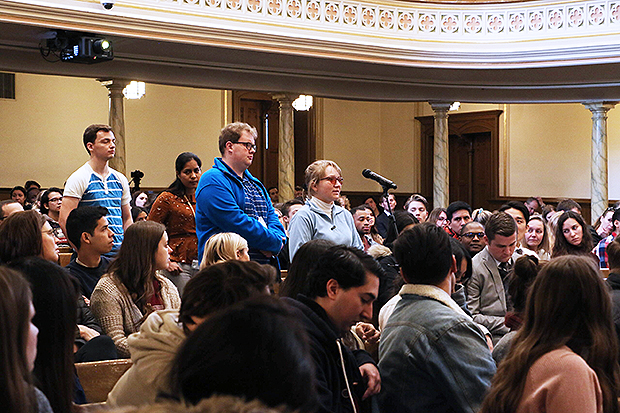 Rebecca Both answers a question during an LDS Business College devotional held in the Assembly Hall at Temple Square on January 14, 2020. Photo by Valerie Johnson.

The fulness of Christ’s gospel—which includes the Creation, Fall, and Atonement and all God-given laws, ordinances, covenants, and doctrine—is designed to bring about the immortality and eternal life of all of God’s children, President Kusch said.

He then asked, “How has your study of the Book of Mormon helped deepen your understanding of Heavenly Father’s plan and helped you receive the power of the Savior’s Atonement in your life?”

“I know when I read through the Book of Mormon super fast, I recognize how many times it just simply says, ‘Keep the commandments,’” Hannah Johnson said. Knowing this inspires her and shows how important this is to Heavenly Father, if it is written so frequently.

“Keeping the commandments is the greatest way to grow close to Heavenly Father and be on His covenant path.”

In response, Skyler Hall referred to Alma’s teaching that faith is like a seed. “You have to nourish it. You have to keep it growing. You have to be obedient to the laws.”

Hall continued, “You may not know yet what is going to happen, but as you work on it, your faith will grow and you will know that Jesus Christ loves you.”

“I Believe in the Savior Jesus Christ”

President Kusch read from the account of the people of King Benjamin, who after hearing the gospel desired to repent (Mosiah 4:2–3). He then asked, “How can having a belief in Jesus Christ give us courage to repent and seek forgiveness of our sins?”

Knowing all that Christ has gone through and that He understands perfectly everything that has happened in her life, “I have been able to turn to Him,” Lexus Cook said. “Because He gives repentance, I’m able to be forgiven of my sins and be able to become whole.”

Those who enter the waters of baptism take upon themselves the name of Jesus Christ, “with a covenant to keep His commandments and always remember Him,” President Kusch said.

“How does worthily partaking of the sacrament each week strengthen you to always remember Christ and live in such a way that you honor and respect His name?”

Partaking of the sacrament each Sunday has helped Gabriela Rivera remember the great sacrifice the Savior has made for her. “I cannot believe that someone could love me in that way to give me the opportunity to try again. And to remember that someone could do that for me, I will honor forever His name.” 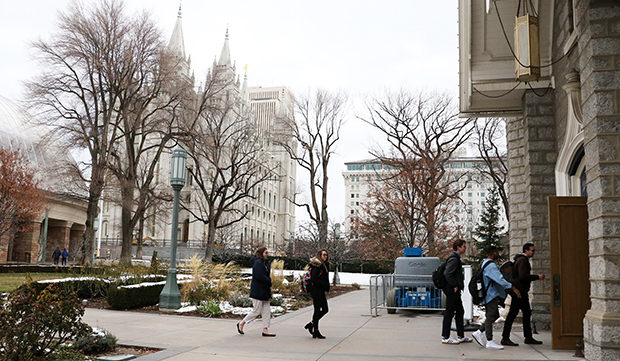 Students enter the Assembly Hall on Temple Square before an LDS Business College devotional on January 14, 2020. Photo by Valerie Johnson.

President Kusch shared how Samuel the Lamanite taught that each person is free to act for him or herself.

“A commitment to do what is right every single day is a choice that we make every single day. What have you learned about the blessing of moral agency as you have exercised it righteously to make good choices?”

While growing up, Isaiah Raisor would want to control others, he said. However, reading about the war in heaven and about “the Lord’s plan to let us have agency” helped him understand its importance. “Doing service with that [in mind] has just shown me again the blessings of agency and how to use it wisely.”

Elder David A. Bednar has likened receiving revelation to either a light switching on in a dark room or the steady rising glow of a sunrise. Most of the time, revelation comes gradually and almost imperceptibly, President Kusch said.

“I think we need to surround ourselves in places that light can be,” Josh Trimble said. “If you’re trying to read a book, you don’t go find a dark room and open it up. You need to be somewhere where light can be.”

It’s important to be somewhere that allows one to receive revelation and to be surrounded by “good friends, good examples, and good leaders to look up to for guidance and for an example,” Trimble said. 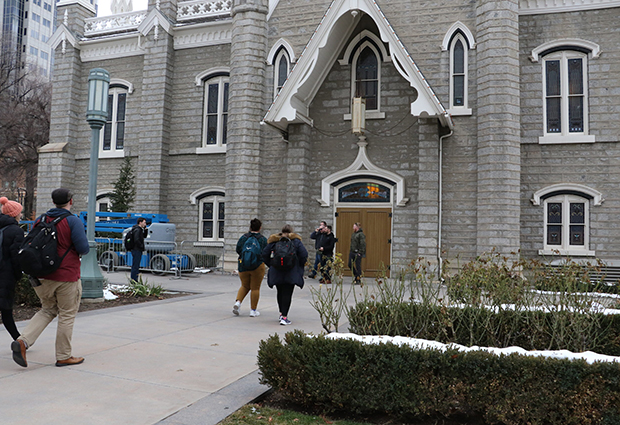 Students arrive at the Assembly Hall on Temple Square before an LDS Business College devotional on January 14, 2020. Photo by Valerie Johnson.

“His Truth I Will Proclaim”

On New Year’s Day, President Kusch said, President Nelson extended an invitation to members of the Church to be a major part of sharing the message of the Restoration of the gospel and to immerse themselves in its glorious light.

“Besides being a great example of a faithful disciple of Jesus Christ every day, what would you say to help us each follow the invitation from our prophet?” President Kusch asked.

“I would say,have courage to do it,” Isaac Aguilar said. “Seek to follow the promptings of the Holy Ghost, and when you receive them, just do it.”

This is the main reason people don’t share the gospel, he said. “I think we just need to increase our faith to act and do it.”

“Brothers and sisters, this Primary song is simple and powerful,” President Kusch said in closing. “The gospel, as we strive to live it, may not seem so simple, but things that we can experience in our lives are powerful as we do so.”

In her remarks, Sister Kusch shared the story of a group of starving settlers in Panguitch, Utah. In the winter of 1864, deep snow had come early and the settlers’ wheat was left unmatured and inedible.

As their situation grew dire and some began dying of starvation, a group of seven men left on a 40-mile trek to the nearest town. “They were equipped with one wagon, two oxen, and a few quilts to keep them warm as they traveled,” Sister Kusch said. 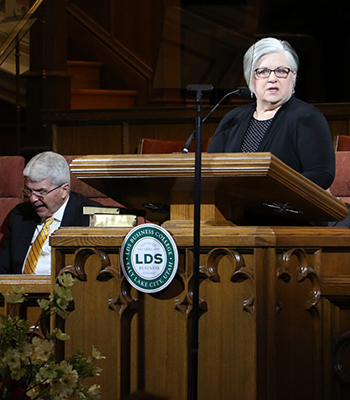 Though they made good progress initially, the snow soon became too deep for the wheels and, soon, their own feet. In their weakened state and with little hope of progressing, the men decided they needed the Lord’s help.

“They carefully laid a quilt down upon the crusty snow, knelt together, and prayed for desperately needed assistance and guidance,” Sister Kusch said.

As they finished, they noticed that the quilt had held the weight of seven men, and they realized they had the answer to their prayer.

“Inspired, they lay their quilts end to end on the snow,” Sister Kusch said. They made their way to Parowan by laying down a quilt, walking across it, and laying down the next one.

This miracle is celebrated each year as the Panguitch Quilt Walk.

The great lesson of this event, to Sister Kusch, was the courage these men had to “get on their feet and act upon the inspiration they had received. . . .

“As you have faith in [Jesus Christ] and with intent call upon Him, Heavenly Father will guide you and inspire you. He will answer your prayers. Your responsibility will be to then get on your feet and walk upon your personal quilts to safety.”