New Zealand Meeting Exemplifies Collaborations between the Church and Its Friends

Elder Ronald A. Rasband of the Quorum of the Twelve Apostles and Sister Melanie Rasband, second and third from left, join Elder K. Brett Nattress of the Seventy and Sister Shawna Nattress; Dr. Mustafa Farouk, president of the Federation of Islamic Associations of New Zealand, and Mrs. Bilkisu Farouk; and Mr. Tim Macindoe MP, on November 16, 2019.

And tucked into that busy weekend schedule for Elder Rasband of the Quorum of the Twelve Apostles and his wife, Sister Melanie Rasband, was what was listed as “a light luncheon” on Saturday, November 16.

For about an hour in Hamilton, the Rasbands met with Dr. Mustafa Farouk, president of the Federation of Islamic Associations of New Zealand, and his wife, Bilkisu Farouk, and Tim Macindoe MP, the New Zealand Parliament member who represents west Hamilton. Other participants included Elder K. Brett Nattress, a General Authority Seventy and counselor in the Auckland-based Pacific Area Presidency, and his wife, Sister Shawna Nattress.

The interactions included introductions, exchanges of greetings and gifts, and messages of shared interest and mutual collaboration. More than a mere courtesy visit, the meeting served as a “building bridges” moment—a phrase used by Elder Rasband and other Church leaders, including President Russell M. Nelson, as evidenced by a recent Church News video bearing the same phrase as the title.

Such meetings with national and local government, religious, educational, charity, and community leaders regularly dot the multievent travel schedules of the members of the First Presidency and Quorum of the Twelve Apostles.

Ironically, the New Zealand gathering was being held on the same day that President Nelson began his seven-day Southeast Asia ministry in Vietnam, Cambodia, Singapore, and Indonesia—the latest in a two-year line of his global trips to gather with the Saints and conduct similar meetings with prominent local leaders.

Sometimes these “building bridges” interactions are starting points; on the opposite end of the spectrum, sometimes these meetings are reunions among longtime acquaintances. And other times—like in Hamilton last month—the meeting is simply the latest moment in a sustained cooperative relationship.

“They were already great friends of the Church,” said Elder Rasband of Macindoe and Mustafa Farouk. “Both of them had met our senior leadership, so I didn’t have to do much bridge building. Not only did they have high-level contacts in the Church, but their day-to-day relationships with local Church members could not be better.”

And so the Hamilton meeting wasn’t so much of a start-and-stop, singular moment of history meriting an individual report itself. Rather, it can be seen as the latest interaction in an ongoing relationship that has a past, a present, and a future.

Few of these “bridge-building” opportunities have a catastrophic catalyst like that which has drawn the Latter-day Saint and Islamic communities together in New Zealand—the March 15 shooting resulting in the deaths of 51 worshippers at two mosques in Christchurch.

The Church was recognized as one of the first organizations to publicly condemn the terrorist attack as its Pacific Area Presidency released a statement of condolences and support for the Muslim community and others impacted by the shootings.

Soon after, Latter-day Saints united with Muslims and others in multidenominational services held in Auckland, Hamilton, and elsewhere throughout the island nation, grieving, praying, and sharing faith together. When devotional services overlapped the 6:35 p.m. time for Islamic prayer, Muslim brothers and sisters left the meetinghouse chapel to conduct their evening prayers in rooms Church members had prepared for them to use.

At one such service, Elder Ian S. Ardern, a General Authority Seventy and President of the Pacific Area, said the interfaith devotionals were “an outward demonstration of our inward commitment to mourn with those who mourn and comfort those who stand in need of comfort.”

He added, “We are our brother’s and our sister’s keeper, and we must act accordingly.”

In Christchurch specifically and throughout New Zealand, Latter-day Saints joined Muslims and people of other faiths and interests to serve families impacted by the shooting, including providing donations of money and food.

This Newsroom video highlights how Latter-day Saints helped families in New Zealand impacted by the March 15, 2019, mosque shootings that took the lives of 51 Muslim worshippers in Christchurch.

Soon, a cooperative effort between Church members and Muslims was preparing “Boxes of Love,” which contained ethnically appropriate food and items—such as dates for the Ramadan period of fasting, prayer, and reflection—and were organized in a family-specific manner.

“Local members have embraced, served, and loved their Muslim neighbors and friends during and following the tragic events that occurred in Christchurch,” said Elder Nattress. “This has strengthened our communities and has blessed our members with the sanctifying spirit of love and peace.

“It has deepened the understanding of all involved that God loves all of His children.”

From what started at the grassroots level of local members reaching out to their Muslim counterparts then went to the pinnacle of a prophet’s involvement, when President Nelson met with Muslim leaders in Auckland on May 20 as part of his ministering in the South Pacific that month.

Dr. Mustafa Farouk led the day’s contingent of Islamic representatives, which included Iman Alabi Lateef Zirullah, leader of the Linwood mosque, one of the two mosques that were attacked. During the meeting, President Nelson announced a $100,000 donation on behalf of The Church of Jesus Christ of Latter-day Saints for the mosques’ rebuilding efforts.

“We’re brothers,” President Nelson said. “It’s so touching when you think of what tragedy [for] those innocent people in a mosque worshipping to be gunned down like that. It’s incomprehensible anybody could do that to another human being.”

In this Newsroom video, learn how President Russell M. Nelson announced the location of the new temple in Auckland in a devotional and later met with local leaders, including the Auckland mayor Phil Goff.

But not all of the Church’s relationships are the result of tragedies, catastrophes, or challenges. Tim Macindoe MP has saluted his long history of friendship with members of The Church of Jesus Christ of Latter-day Saints that dates well before the Christchurch shootings earlier this year, although he did attend the subsequent Hamilton interfaith services.

Over the years, Macindoe has participated in numerous interfaith events with the Pacific Area Presidency and local Church members and leaders. Such include an annual church service of the Waikato Justices of the Peace Association held at a Latter-day Saint meetinghouse in Hamilton in 2015, the visit of an interfaith young adult group to parliament in 2014, and the annual Christmas lights festivals at the Hamilton New Zealand Temple and Visitors’ Center.

Macindoe said he particularly remembers the kindness of President Henry B. Eyring, the Second Counselor of the First Presidency, whom he met when President Eyring went to New Zealand to dedicate the David O. McKay Stake and Cultural Events Centre in June 2017—the same building where the November 16 meeting with Elder Rasband was held.

Of the dedication and preceding cultural celebration, Macindoe posted on Facebook, “It was a privilege to join huge audiences at both, and we appreciated the warm welcome and happy atmosphere.”

“Tim Macindoe was always so receptive to our ideas and so cooperative in everything we tried to accomplish in Hamilton,” said Elder S. Gifford Nielsen, a General Authority Seventy who served in the Pacific Area Presidency from 2014 to 2017. “We could count on him to help us at any time. He was a friend of The Church of Jesus Christ of Latter-day Saints.” 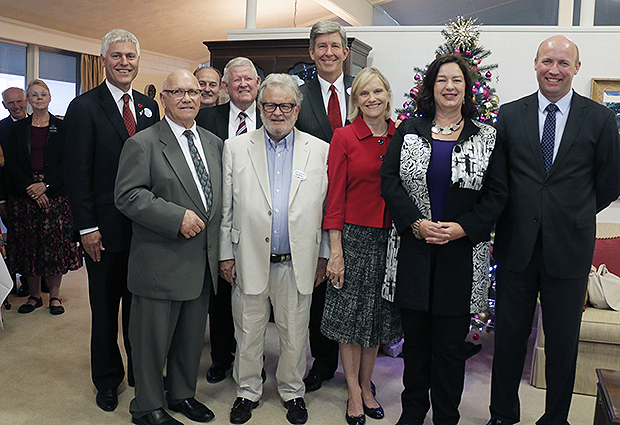 Elder S. Gifford Nielsen and his wife, Sister Wendy Nielsen, fourth and third from the right, join Tim Macindoe MP, left back, and other hosts and guests at the Hamilton New Zealand Temple Christmas Lights in December 2015.

Elder Nielsen said he remembers the joy as the Area Presidency and local leaders in New Zealand reached out to their counterparts in other religious and governmental organizations to form “a strong partnership with these people who have such great influence.”

“We found out that as we connected with these wonderful leaders, we could do extraordinary things together,” Elder Nielsen said. “We became not only allies to make our communities better places to live but also great friends.”

Tim Macindoe MP, a member of New Zealand’s Parliament, who represents west Hamilton, received a Christus statue from Elder Ronald A. Rasband in a November 16, 2019, meeting in Hamilton, New Zealand.

In the November 16 meeting in Hamilton, Elder Rasband presented a small Christus statue to Macindoe and The Reformation of Morals—a book in English and Arabic by Yahya Ibn Adi—to Farouk, who said it was an honor and pleasure to meet the Church elder and share some thoughts with him.

“When he was handing the book to me, he said, ‘This book explains some of our values,’” Farouk said. “On reading the book later, I realized it was written by a Christian hundreds of years ago (893-974 CE) who worked hard through his writings and translations to bring Christians and Muslims closer together during his time. 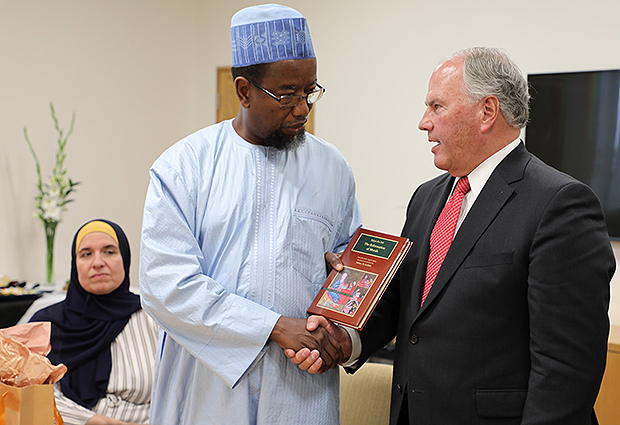 Dr. Mustafa Farouk, president of the Federation of Islamic Associations of New Zealand, receives a book from Elder Ronald A. Rasband in a November 16, 2019, meeting in Hamilton, New Zealand.

“Without saying much, I believe Elder Rasband was telling me that our communities need to work together today as much or even harder as were the communities during Yahya Ibn Adi’s time.”

Elder Nattress linked President Nelson’s ministering visit in May to Elder Rasband’s interactions as “examples of pure, undefiled religion” and acknowledged Farouk as “a great advocate of peace, forgiveness, and love.”

During the meeting, “we discussed the need to serve one another, to bear one another’s burdens, and to comfort those who stand in need of comfort,” Elder Nattress said, adding, “These are our neighbors and our friends. They are loving fathers, loving mothers, and devoted brothers and sisters.”

Elder Rasband returned to the “building bridges” theme as he summarized the meeting. “Part of what we do is bridge-building with these people—and it was already there,” he said. “For me, it was just adding to an already-wonderful relationship, thanking them and establishing further ties for when we call on each other in the future.”

Just as the relationships past help set the stage for the recent reconvening of Church leaders with Farouk and Macindoe in Hamilton, that same November meeting helps advance future cooperation and collaboration.

Farouk said he and the Muslim community look forward to working on many more projects “and in strengthening our relationship for our mutual benefit and the benefit of humanity at large.” 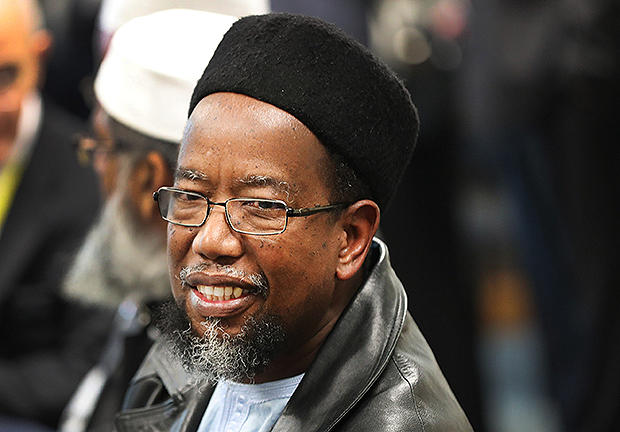 Dr. Mustafa Farouk meets with President Russell M. Nelson of The Church of Jesus Christ of Latter-day Saints in Auckland, New Zealand, on May 21, 2019. Two imams represented the Al Noor and Linwood mosques, where innocent worshippers were gunned down March 15 in Christchurch. Photo by Jeffrey D. Allred, Deseret News.

“Currently our two communities are working together on projects of national interest, including petitioning New Zealand Parliament to declare 15 March every year as a day of prayer and reflection in memory of the 51 victims of the attack at Christchurch,” he said.

Farouk, too, has his eye on the future—and concluded his summary by using a recognizable phrase.

“So it was a great pleasure to pick up from our conversation with Elder Rasband that the [Latter-day Saint] Church is keen to further strengthen relationships with our community and that the Church places great importance on bridge building and cooperation with other faith communities.”

Said Elder Rasband, whose November 16 efforts nurtured the existing relationships with two of the Church’s friends in New Zealand, “It is a challenging world there, and they are facing the same kinds of issues we are here.

“And so it was nice to just reaffirm, reconnect, and reposition for the future—and that was done.”