Forming a heart with his fingers, Elder Ronald A. Rasband bids farewell to young single adults after speaking at a November 17, 2019, devotional in Auckland, New Zealand.

With visits to the well-established stakes in Auckland and Hamilton, New Zealand, to a small growing Mandarin branch in Melbourne, Australia, and on to a Fijian island welcoming an Apostle for the first time, it’s no wonder Elder Ronald A. Rasband labeled his recent 14-day, 3-nation assignment in the Pacific Area as ministering “from A to Z in terms of Church experience and people we met.”

In addition to conferences and devotionals with members and missionaries, Elder Rasband of the Quorum of the Twelve Apostles also met with a Dr. Mustafa Farouk, president of the Federation of Islamic Associations of New Zealand, and Tim Macindoe, member of parliament for Hamilton West, and also spent time with the area’s communications teams. 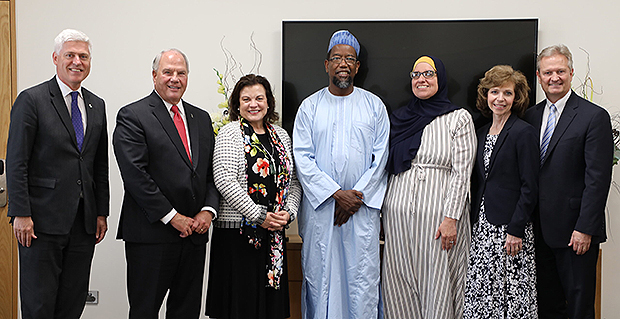 Added to the diversity of experiences was Elder Rasband and his wife, Sister Melanie Rasband, spending time in study, meetings, and teachings with a pair of their missionary grandsons serving in the area. “That was the icing on the cake,” Elder Rasband said. “It was a thrill to be with them.”

Ministering to the Members

“His message was felt by all and brought us closer to our Savior Jesus Christ,” said Temple View New Zealand Stake president John A. Kendall. “We felt the love of President [Russell M.] Nelson as Elder Rasband conveyed his message to us that our prophet loves us and thanks us for all we do to build up Zion and added that we are all needed to accomplish the Lord’s work.”

Elder Rasband explained the important role all adults have in protecting and helping the rising generation gain their own testimonies and personal relationship with the Savior, President Kendall said. 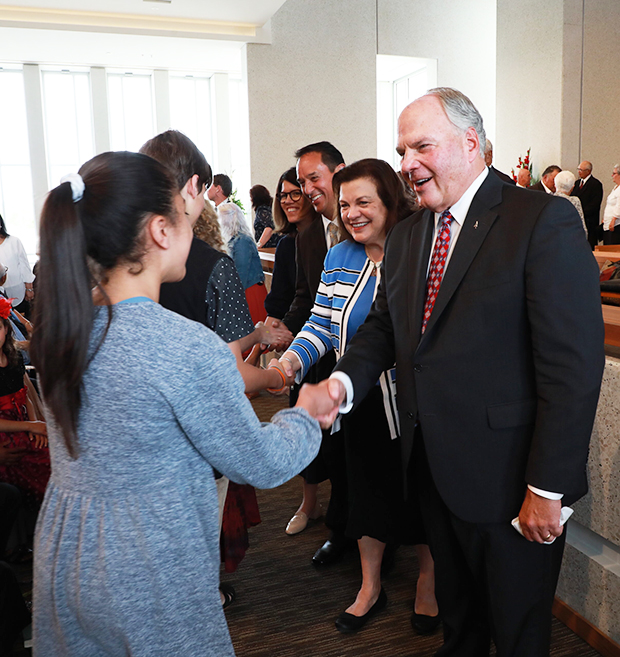 The conference session then ended with the invitation for the younger members “to come forward one by one so that each child and youth could shake the hand of a prophet, seer, revelator, and Apostle of the Lord Jesus,” he added. “We will all cherish Elder and Sister Rasband’s visit for generations to come.”

Said Calla Dimaya of her learning from Elder Rasband at the YSA devotional in Auckland: “His encouragement to always keep a current temple recommend reminded me how important it is to always stay worthy. Since we don’t currently have an operating temple here in New Zealand, it can be easy to let your recommend expire without renewing it. Elder Rasband’s talk reminded me that a temple recommend isn’t just a piece of paper that lets us into the temple; when we sign our recommend, we commit to living up to the Lord’s standards.”

The Rasbands were scheduled to conclude their Pacific trip with back-to-back leadership and stake conferences in Samoa and American Samoa—a Saturday and Sunday in Apia before flying the 120-plus kilometers (75 miles) across the international dateline and immediately follow up with similar Saturday and Sunday sessions in Pago Pago. However, a state of emergency following an epidemic measles outbreak across the Samoan islands—resulting in the deaths of two dozen children—resulted in the banning of all public meetings.

Instead, the Rasbands and Arderns detoured for a district conference on Taveuni, a small island of 19,000 residents where local Latter-day Saints welcomed one of the Lord’s Apostles for the first time. For the Arderns, who had presided previously over the Fiji Suva Mission, it made for a sweet reunion with the Taveuni members, who gathered in the only Church-built chapel on the island and spilled over into an adjacent tent for shade from the sun.

“Elder and Sister Rasband stirred the hearts of the eager members with their testimonies of Christ and the Restoration of the Church,” Elder Ardern said. “He encouraged them to build strong multigenerational families by being true to the covenants they make and keeping the commandments.”

Said President Eliki Seniloli, the Taveuni Fiji District president: “We the people of the Island of Taveuni have witnessed a historical moment, for the first time the coming of any of the Apostles to our shores.”

He expressed gratitude for Elder Rasband’s last-minute visit. “Even though it was a short notice, the Saints were excited and looking forward to his message in our district conference.

“We were very much inspired and are working towards getting back our lost souls,” President Seniloli added. “This conference we had the highest attendance of 425 Saints, compared to any other of our Taveuni District conferences. We are looking forward to other visits on this garden island of Fiji which is Taveuni.” 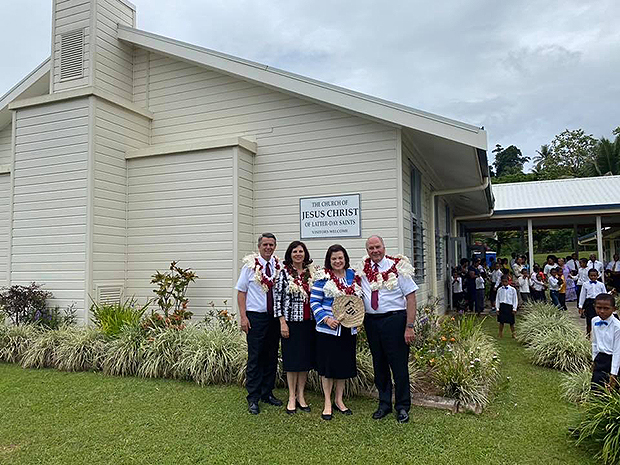 Ministering to the Missionaries

The Rasbands conducted devotionals with missionaries in three countries, beginning with a November 15 devotional at the New Zealand Missionary Training Center in the Auckland suburb of Manukau. Their audience: 21 missionaries who had been at the MTC for only two days and another 21 staff members and teachers.

“It was special to be in Elder Rasband’s presence in such a small group and to shake his hand,” said Elder Celyn Tramacchi from Gympie, Australia, called to serve in the Australia Adelaide Mission. “He helped me understand we are going out to find the Lord’s elect, yet we may never see the full blessings that will come to their lives.”

Companions Sister Eden Keung and Sister Kierra Gunnell were touched by Elder Rasband’s plea to the missionaries of “we need you” as he gave scriptural accounts  (2 Timothy 2:1, 2 Nephi 28:20, and Doctrine and Covenants 1:17) to illustrate the state of the world today and the need for missionaries to bring goodness, happiness, and joy to the world by helping people find the covenant path.

“He made us realize the weight of our calling—how important it is to serve,” said Sister Keung, from Hamilton, New Zealand, going to the Adelaide mission.

Added Sister Gunnell, from Centerville, Utah, and assigned to the New Zealand Wellington Mission: “He made me feel like the Lord trusts us to help bring goodness to the world.”

On November 18, the Rasbands held a devotional with the Australia Melbourne Mission.

“When Elder Rasband spoke to us, I realized the importance and sacredness of my call, the significance of every area I serve in and every companion I have,” said Sister Madison Hill of Provo, Utah. “He talked about his call to be an Apostle. He spoke of how President [Thomas S.] Monson told him that this call came from Jesus Christ. It was amazing to feel the Spirit testify that our call comes from the same authority.” 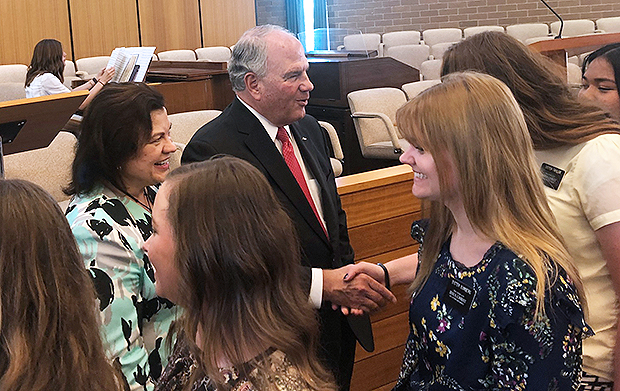 Elder Ronald A. Rasband, center back, and his wife, Sister Melanie Rasband, greet missionaries of the Australia Melbourne Mission as part of a November 18, 2019, mission devotional.

And Sister Bailey Young of Highland, Utah, said that from the November 21 devotional with Fiji Suva Mission missionaries serving on the main island, she learned she is loved.

“As I leave a willing sacrifice of my previous life and selfish desires on God’s altar, which I once gave somewhat grudgingly, I can receive strength and spiritual power I need,” she said. “It is all about what I am willing to give. I feel powerfully that because Christ unselfishly gave His whole life to help me, I can give my all for the rest of my mission to help my brothers and sisters.”

Ministering to the Missionary Grandsons

In Melbourne, the Rasbands joined grandson Elder Jameson MacPherson of Draper, Utah, and his companion in personal and companion study, a district meeting, teaching appointment, and evening devotional with the Mandarin branch in which he serves.

“Growing up being a grandson of Elder and Sister Rasband, you know what they are doing is important but rarely get a front-row seat of what their life is like—unless it’s general conference,” said Elder MacPherson.

“When Pa and Grami came to visit, my testimony of the importance of their calling and my calling as an elder of Israel was increased immensely,” he added. “It was a joy for me to show my grandparents the Chinese city branch and for me to introduce them to some of my best friends found on the mission. Through their ministering, I was able to better focus my life upon the love I have for our Savior.”

In Suva, the Rasbands spent time with another grandson, Elder Ammon MacPherson, who has been serving for just two months. Their endeavors together included meeting with a recent Indo-Fijian convert to teach his mother and younger sister, followed by a media interview with the Fiji Sun and an evening devotional with the Suva 3rd Ward, where Elder MacPherson serves.

He said that while being away from family and committed in the Lord’s service, he has learned more about life’s most important matters. “There is no greater joy than the eternal connections of love within a family,” Elder MacPherson said. “I took this empowering gift for granted often before the mission, but never shall I again.

“Seeing and being with my grandparents brought forth more joy and encouragement than I can describe. Embracing their love and faith in me silenced all my fears—it helped me rise above my current discouragements. It inspired me to work harder so others may also be able to experience the joy of eternal families. I will forever be grateful for their visit and for the strength I discovered in their love.”

Said Elder Rasband: “I think one of the lessons that Sister Rasband and I had was that even though we had experiences with our grandsons, they were surrounded by fellow missionaries, fellow members, and we just felt like we were ministering everywhere we went. . . . We engaged in their work, we got deep in their work, and we were able to make a difference.” 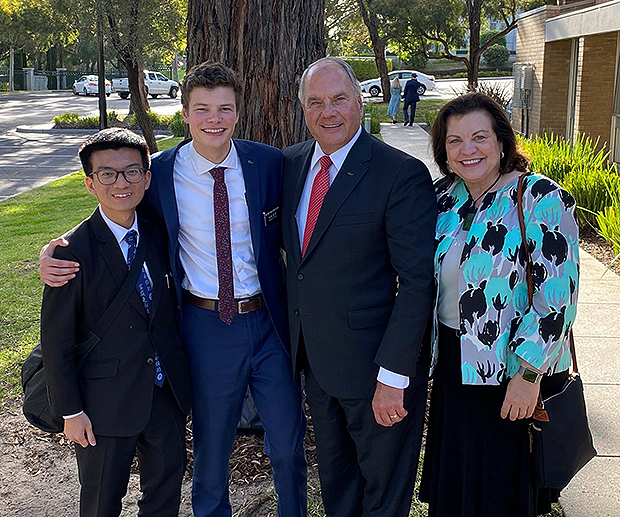 Ministering at All Times

Said Elder Nattress of the Rasbands’ Pacific efforts: “Those who attended the meetings were noticeably touched by the spirit of Elder Rasband’s teaching and testimony. He listened to their questions, discerned their hearts, and then taught with great power and authority.

“Elder and Sister Rasband didn’t miss a single opportunity to reach out and minister to all—in airports, streets, sidewalks, meetinghouses, and homes. The result was always the same—all were lifted and inspired and felt the love of the Lord.”

While members, missionaries, and leaders all had their learning experiences from meetings and interactions with the Rasbands, so did the Rasbands themselves in their Pacific ministerings. 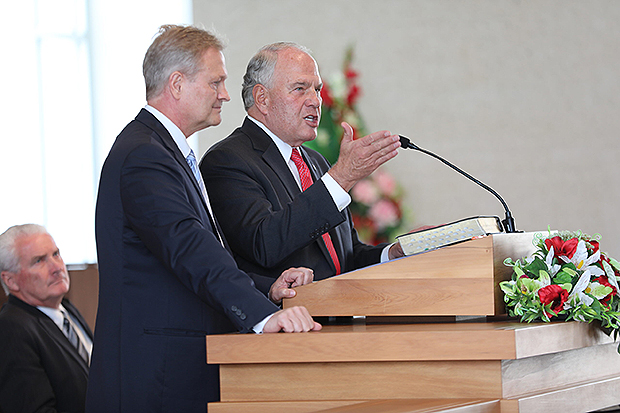 Elder Ronald A. Rasband of the Quorum of the Twelve Apostles, right, is joined at the pulpit by Elder K. Brett Nattress, a General Authority Seventy and counselor in the Pacific Area Presidency, during a November 16, 2019, priesthood leadership conference session. 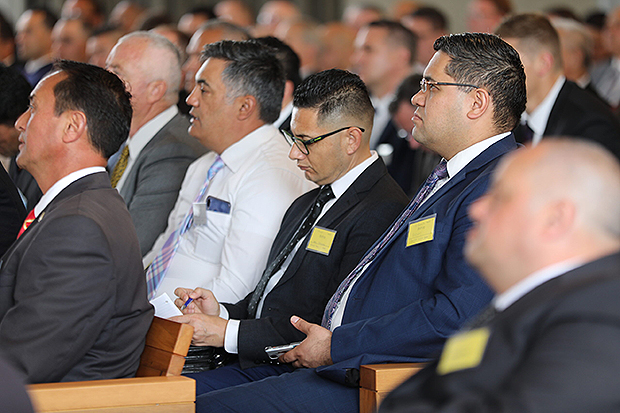 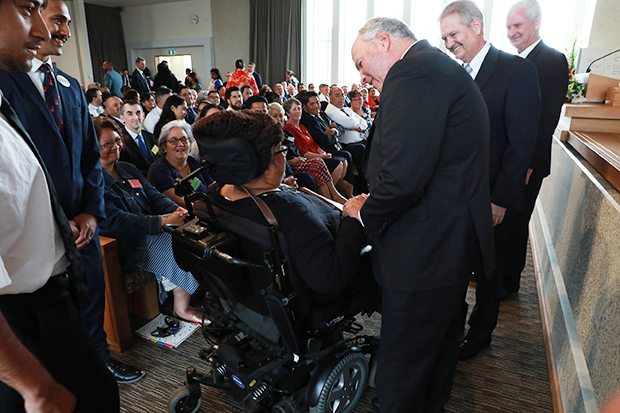 Elder Ronald A. Rasband greets a member as part of a November 16, 2019, leadership conference with ward and stake leaders in Hamilton, New Zealand. 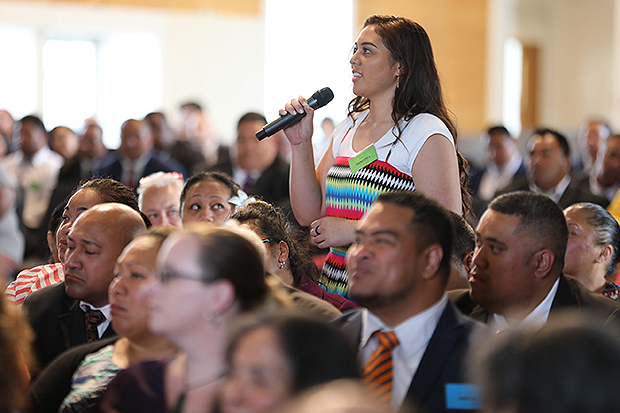 A sister attending the November 16, 2019, leadership conference with Elder Ronald A. Rasband in Hamilton, New Zealand, rises to ask a question. 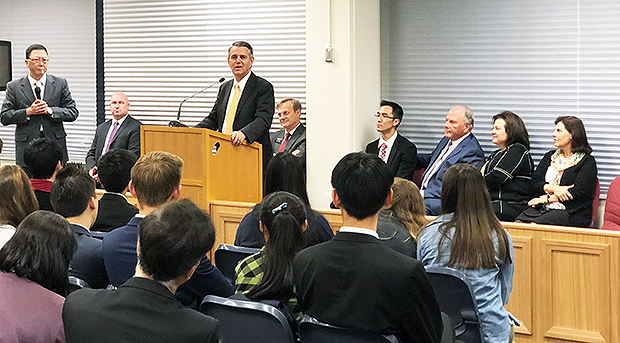 Elder Ian S. Ardern, a General Authority Seventy and President of the Pacific Area, speaks at a devotional with the Melbourne 1st (Mandarin) Branch on November 18, 2019, in Melbourne, Australia. 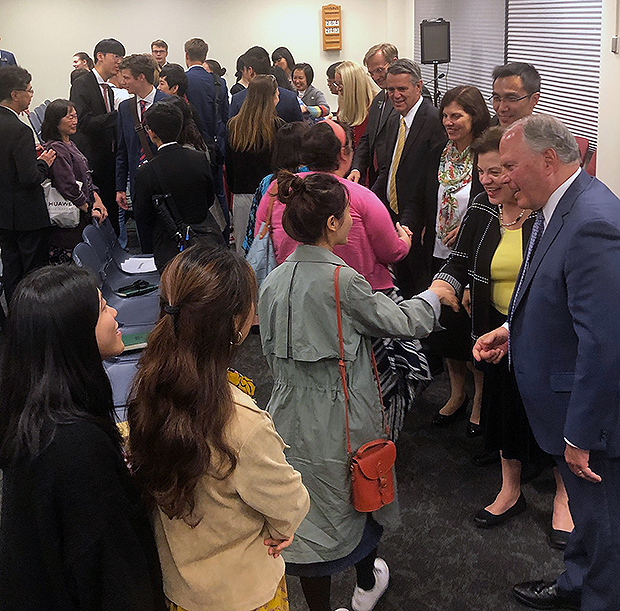 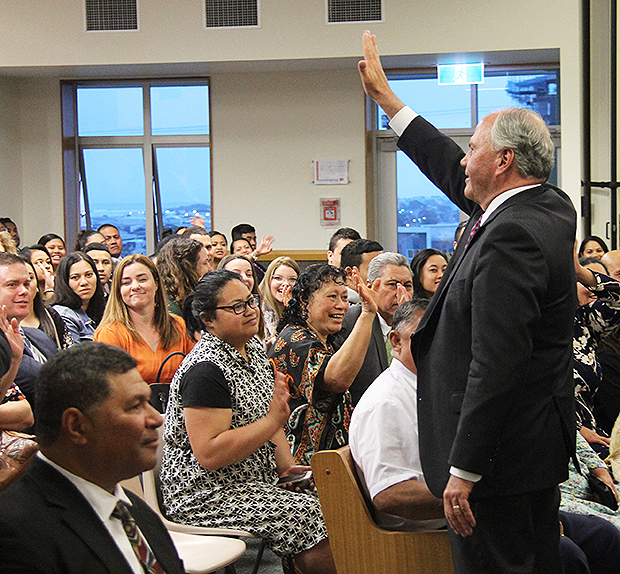 Elder Ronald A. Rasband waves to young single adults after speaking at a November 17, 2019, devotional in Auckland, New Zealand. 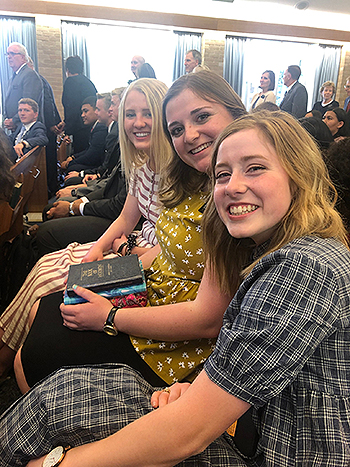 Sister missionaries of the Australia Melbourne Mission await the start of a November 18, 2019, devotional with Elder Ronald A. Rasband in Melbourne, Australia. 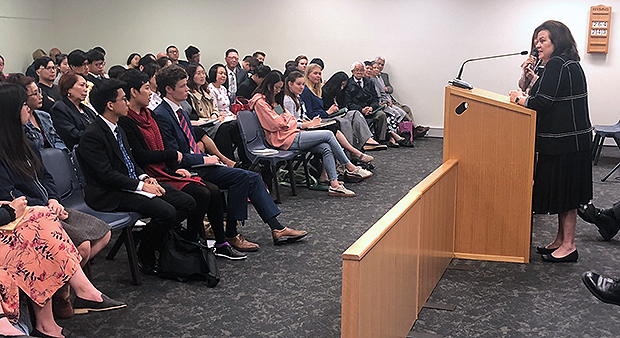 Sister Melanie Rasband, wife of Elder Ronald A. Rasband, speaks to members of the Melbourne 1st (Mandarin) Branch during a November 18, 2019, devotional. 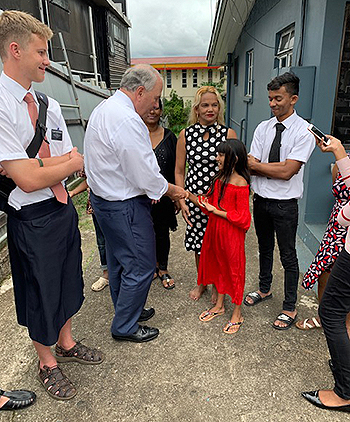 With missionary grandson Elder Ammon MacPherson at his side, Elder Ronald A. Rasband greets Aaliyah R. Chand, who is flanked by her mother, Zareena Bi, and her recent-convert brother, Zaral Ali. Elder Rasband joined his grandson in teaching Aaliyah and Zareena in Suva, Fiji, on November 21, 2019.