“You are not a failure. You are not a fraud. You were created to succeed, and with the help of the Savior, I promise that you will succeed.” —Elder Kevin R. Duncun, General Authority Seventy

Many have heard of the acronym FOMO, or “fear of missing out.” But Elder Kevin R. Duncan, a General Authority Seventy, introduced a new acronym to the students of LDS Business College during a recent devotional—FOBFO.

FOBFO stands for the “‘fear of being found out,’ otherwise known as ‘the imposter syndrome,’” Elder Duncan explained on March 10 at the Assembly Hall on Temple Square in Salt Lake City.

Simply put, imposter syndrome is when successful people see themselves as a fraud, he explained. Despite their achievements, they chalk up their accomplishments to good fortune or a lucky break, and they fear that ultimately others will find out they aren’t really as good as they appear.

“Trust me, for every bright moment you see on social media, there is also a proportionate struggle that you do not see,” Elder Duncan said. “As we know, ‘There must needs be opposition in all things’ (see 2 Nephi 2:11). It’s a law of mortal life.”

So how does one remain “optimistic at times when it seems easy to feel discouraged and defeated”? Elder Duncan encouraged students to ignore the demons of inadequacy and “listen instead to the angels of hope and to the source of all hope, that being Jesus Christ, the only true source of hope.”

He assured the students they are not alone when experiencing doubt in their abilities. “The scriptures are . . . full of true accounts of people who felt underqualified,” Elder Duncan said. “But when things seemed most difficult, they trusted God.”

He cited the examples of Mary, the mother of Jesus Christ; Moses; Joseph Smith; Nephi; and Enoch—each of whom felt inadequate in their callings and still trusted in God. Even the modern-day prophets and apostles have come from difficult circumstances and felt inadequate. “Yet God has called and sustained each one,” Elder Duncan said.

In particular, he focused on Elder Jeffrey R. Holland of the Quorum of the Twelve Apostles. When he was a young student at BYU in Provo, Utah, Elder Holland felt overwhelmed and underqualified and doubted his own abilities. He even considered dropping out of school and returning to St. George, Utah.

Elder Duncan shared how Sister Patricia Holland, Elder Holland’s wife, took him by the shoulders “and said, ‘Of course we are not returning home! We are here to stay, and we will do this!’”

Fortunately, Elder Holland did stay at BYU. And when he graduated, he decided to attend graduate school at Yale University. Elder Duncan shared a video of the Apostle’s experience trying to make the journey with his young family in an old car, which Elder Holland shared in his October 1999 general conference address.

“Think what it has meant for you and me that Elder Holland did stay in school,” Elder Duncan said. “His education and experiences molded him and shaped him into the beloved Apostle that he is today.”

The common theme among these stories, Elder Duncan said, is “though we are weak and human, God assures us that He will be with us, that He will walk with us,” he said. “We are strong because of Him. Whether it is to secure brass plates, build a ship, confront Pharaoh, earn an education, get married, or raise a family, He will increase our capacities and make weak things become strong. He will be with us.”

Weaknesses are necessary for humility, which is crucial for each person’s spiritual advancement, Elder Duncan said. “Humility is knowing that we ultimately depend upon God for everything, and humility is choosing to put ourselves in partnership with Him to grow and to progress unto eventual perfection and exaltation.” 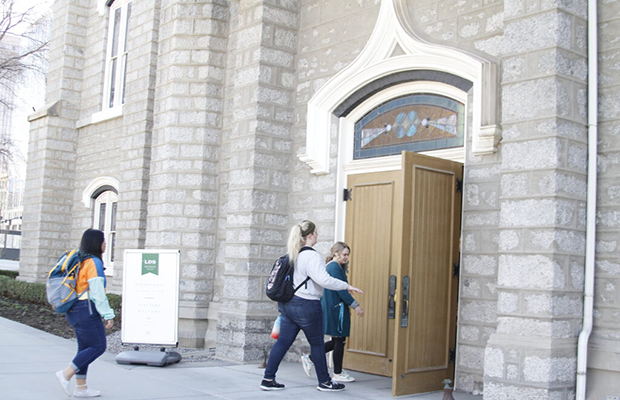 Elder Duncan has faced his own struggles and understands the plight of students who “have it tough.” When he was a young married father, the unthinkable happened: “My wife of less than two years was killed as a result of an automobile accident.”

He was left to care for their 7-month-old baby girl alone and returned to school as a single father to finish his education. Working, dating, taking care of his daughter, attending classes, and doing homework was rigorous and discouraging. Once, his daughter caught pneumonia and had to be hospitalized—right during finals.

“My spirits fell even further, and I pled with God, ‘What more will you require of me?’”

But Elder Duncan did complete his education, “and, best of all, during that time, I found and married my sweetheart Nancy.”

While life wasn’t perfect for him after graduating from BYU and he experienced some failures, “things eventually improved,” he said, “and many blessings followed.”

Things will get better, he assured the students. The most important lesson to learn in such a situation, he said, is to know in whom they can trust. 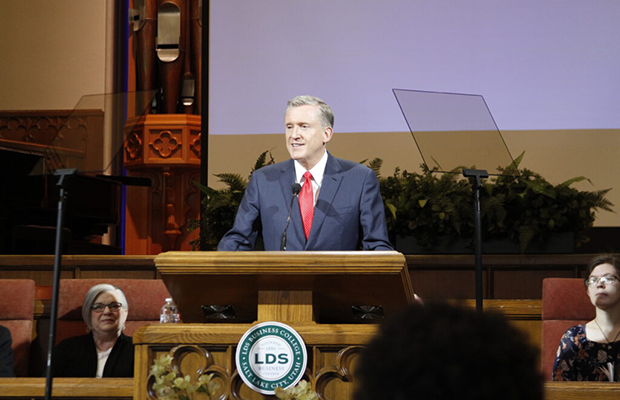 “Salvation is nothing more nor less than to triumph over all our enemies and put them under our feet. The principle of salvation is given us through the knowledge of Jesus Christ.”

Everyone has enemies, and the world is full of them. They include abuse, addiction, betrayal, poverty, depression, selfishness, greed, lust, immorality, disease, death—and the list goes on.

Everyone needs help to confront and combat these enemies. That help comes in Jesus Christ, who knows how to triumph over all enemies.

It is not weak to plead with God for help, Elder Duncan said. “In fact, the more you plead to hear Him, the more peace and strength will come to you in your hour of need.”

Each person is a choice son or daughter of God, created in His image. “You are not a failure,” Elder Duncan said. “You are not a fraud. You were created to succeed, and with the help of the Savior, I promise that you will succeed.” 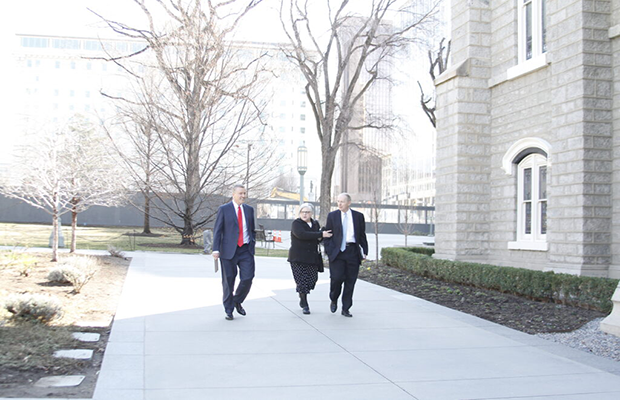 Elder Kevin R. Duncan of the Seventy, left, walks to the Assembly Hall with LDS Business College president Bruce R. Kusch and his wife, Sister Alynda Kusch, for a devotional on March 10, 2020. Photo by Valerie Johnson.