Elder Dieter F. Uchtdorf and Sister Harriet Uchtdorf salute thousands of students gathered inside the BYU–Idaho Center on March 1, 2020, for an evening devotional. They are joined on the podium by BYU–Idaho president Henry J. Eyring, far left, and his wife, Sister Kelly Eyring. Photo by Brooke Larsen, BYU–Idaho.

Thousands of students arrived at the BYU–Idaho Center hours before Sunday night’s devotional at the Church-owned school.

They were eager to spend an early-March evening with Elder Dieter F. Uchtdorf and his wife, Sister Harriet Uchtdorf.

For the Uchtdorfs, the feeling was mutual.

“Your hope, faith, and desire to do good lift my spirits and inspire me. Thank you,” said Elder Uchtdorf, a member of the Quorum of the Twelve Apostles, at the beginning of his broadcast devotional message. “I am overwhelmed with the impression that I am among a people of goodness and light.”

The spacious forum was filled to capacity with students. Many brought their journals, scribbling down the abundant words of instruction shared Sunday by the Uchtdorfs.

When Heavenly Father looks upon His children, He sees them for who they truly are, said Elder Uchtdorf. God knows His children’s fears, despairs, and struggles. He rejoices in their faith, righteous desires, and triumph.

The Apostle spoke of “Roman Triumph”—the grand festival held in Ancient Rome to celebrate victorious generals. The conquering heroes would enter the city riding in a gold- and ivory-decorated chariot. Traditionally, a servant would stand behind the general, holding a golden crown above the great warrior’s head and then, throughout the day, whisper in his ear, “Memento mori”—translated, “Remember, you are mortal.”

It was a humble reminder that the day comes when even great warriors expire.

“You might think that this was a strange practice, and perhaps it was,” said Elder Uchtdorf. “But it is instructive. It reminds us of something we all know. We live on borrowed time, and no matter our health, status, wealth, or fame in this life, we are merely pilgrims on an eternal road.”

Young people such as those attending Sunday’s devotional likely don’t often contemplate the fragility of life.

But prophets throughout the ages have cautioned people of all ages to consider what will happen following mortality. Their messages, however, are not necessarily harsh.

“The prophets of the Most High also have proclaimed the hopeful message that death is not the end,” he said. “Death is not the opposite of life. Death is the opposite of birth. And instead of being at opposite ends of a line, our lives are like an eternal circle where birth leads to death, which ushers us into a new sphere of existence, even a heavenly sphere.”

Each day of life is a precious gift from a loving Heavenly Father.

“What better time than now to choose to become the person we were designed to become? This is good advice not only for us individually but to all of us collectively as well.” 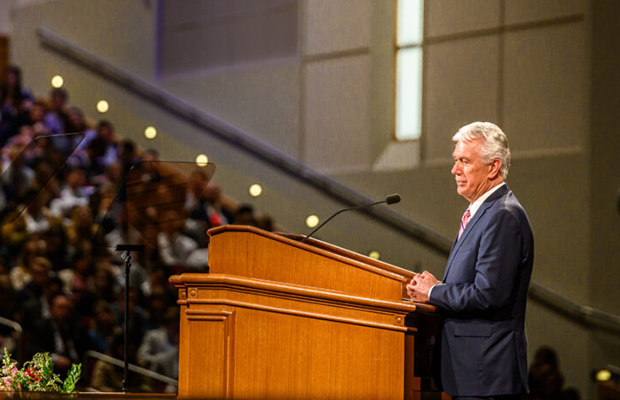 The Savior prophesied of His Second Coming during His mortal ministry. His return will happen, just as He promised, assured Elder Uchtdorf.

“But even with acknowledging this promise, many set their hearts on the pleasures of this world,” he said. “This preoccupation with the things of the world hardens hearts to the things of the Spirit. Many, therefore, focus on accumulating the approval, fame, power, and possessions that seem so alluring instead of gathering all matters of knowledge, temporal and spiritual, and building up treasures that will not rust or can be stolen by thieves.”

Thankfully, many others are choosing God’s way: the path of light.

“Because of that choice, God’s mighty hand will be over you. He will guide your steps. And, one day, you will with certainty know the true worth of your decision to walk in faith and believe in that God that gave you life.”

Through the ages, a disciple’s greatest challenge often is weathering the scorn and criticism of those who have rejected the Lord.

“In our day of anonymous social media, that challenge is certainly more unique if not greater than at any other time in history,” said Elder Uchtdorf. “In Lehi’s dream, opposition came from those who inhabited a large and spacious building and shouted from across the way. Today, that opposition comes not from across a river but face to face—in our homes, living rooms, desktops, and smartphones.”

Like Noah of old, many today know opposition. Why, many are asking, would someone want to belong to an organization that has so many rules?

But true freedom, Elder Uchtdorf said, is not measured by what is prohibited—but by one’s choices that lead to realizing one’s potential. The very act of making such choices requires setting aside other choices.

But the goal is always greater than the sacrifice. 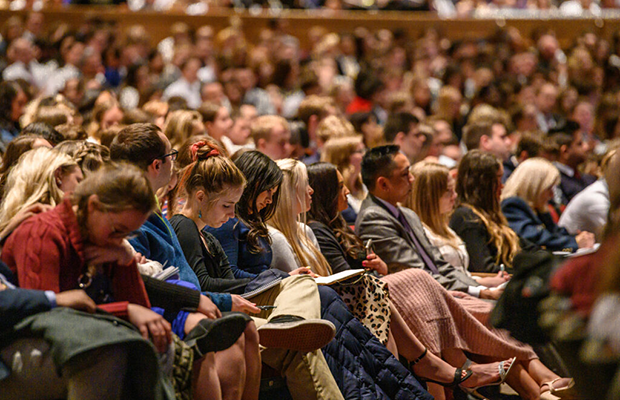 The Importance of Noble Goals

The greatest of all goals, said Elder Uchtdorf, is returning to God’s presence.

“In our quest to become our best selves, we willingly take upon ourselves certain constraints. These constraints are sometimes called commandments. But these commandments are not burdensome—they are delights, for they are the very things that guide us from our current state into the person of glory we wish to become.”

President Uchtdorf promised his young audience that their faith and confidence will grow as they choose to follow the Savior.

“Embark on or continue with renewed faith on the grand adventure of discipleship. Don’t allow discouragement to deter you from your path. Love others. Lift them. Lend those around you your strength and compassion. Share with them the story of your journey. Draw near to your Heavenly Father, and He will draw near to you.” 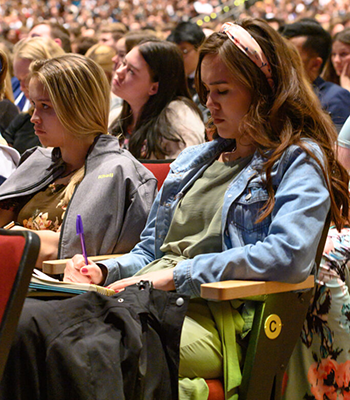 A young woman takes notes during a devotional with Elder Dieter F. Uchtdorf of the Quorum of the Twelve Apostles and his wife, Sister Harriet Uchtdorf, at BYU–Idaho on March 1, 2020. Photo by Brooke Larsen, BYU–Idaho.

In her devotional remarks Sunday, Sister Uchtdorf noted that the current year commemorates the 200th anniversary of the boy Joseph Smith’s First Vision and the influence it has had in millions of personal lives.

She then said that even today, dedicated and courageous young people can have a significant impact on the lives of others that can last for generations. She used her own conversion story as an example.

During her own childhood in Frankfurt, Germany, young Harriet Reich knew sadness. Her beloved father lost his battle to cancer, leaving behind Harriet and her mother and sister. The family’s situation looked hopeless and bleak.

Then an unexpected miracle happened.

“Two young missionaries rang the doorbell at our apartment,” she said. “Reluctantly, we let them in. They brought us the Book of Mormon; they taught us the plan of salvation and what it could mean for our lives.”

In time, Harriet and the rest of her small family were baptized and later sealed together for eternity in the Swiss Temple. 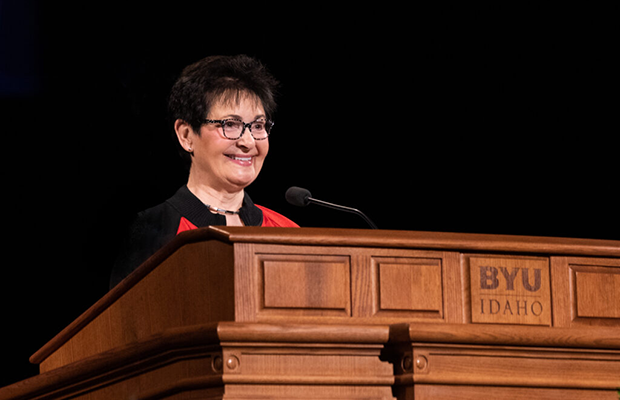 Sister Harriet Uchtdorf speaks about the life-changing impact missionaries have had on her life during a March 1, 2020, devotional at BYU–Idaho. Photo by Ericka Sanders, BYU–Idaho.

Sister Uchtdorf said she’s grateful for missionaries serving today across the globe, sharing those same blessings to all desiring to hear the words of Christ.

“I am grateful for you who are modern disciples of the Savior,” she said. “I am grateful for temples, like the one you have in convenient walking distance. My dear young friends, enjoy the temple and its promises. Enjoy and cherish the privilege of being at this great school. Enjoy the opportunities of friendship in this environment and for the gift that some of these friendships may turn out to be eternal companionships. It can happen. It happened to me.”

After joining the Church, Harriet became acquainted with a fellow Latter-day Saint named Dieter Uchtdorf, who “appeared to have an obvious interest in me.”

Several years passed before she realized that he was the young man she wanted to spend eternity with. “He was quite insistent in his courting and quite a gentleman, and it remains like that up to today.”

Eventually, Harriet and Dieter married in the Swiss Temple. Today, they are the parents of two children, six grandchildren, and five great-grandchildren.

All these blessings came into the Uchtdorfs’ lives because two missionaries had the desire and the courage to serve, all because temples are a central topic in our conversion stories, she said.

All these blessings came, she continued, because the gospel and Church of Jesus Christ are back on earth again and because a young person, even Joseph Smith, had the faith and courage to pray and then listen to the voice from on high.

And all such blessings came because the authority to seal on earth that which is sealed in heaven is restored again and prophets and apostles serve God and His children.

Sister Uchtdorf concluded declaring her support and love for the First Presidency and the Twelve and her eternal love for her husband.

“My dear friends, I love and admire you all,” she told the students. “You are magnificent. You are more than enough in the eyes of Jesus Christ. I hope and pray that you can feel this too.” 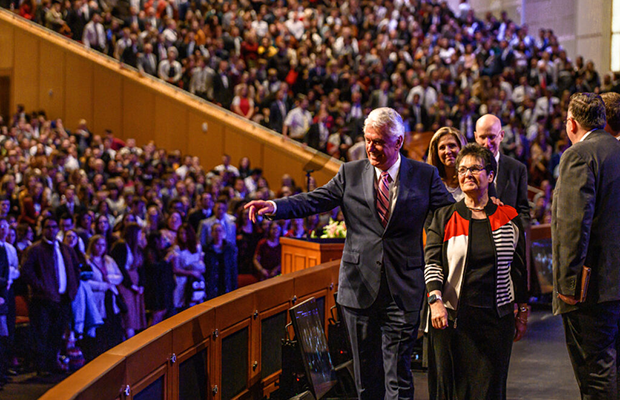 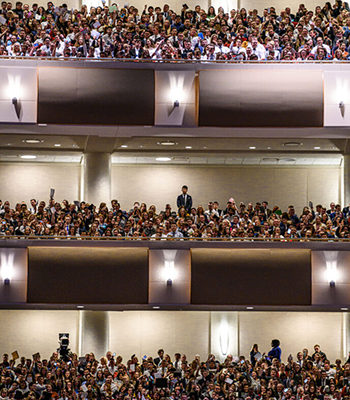 Thousands of students cram into the BYU–Idaho Center on March 1, 2020, to listen to counsel from Elder Dieter F. Uchtdorf and Sister Harriet Uchtdorf. Photo by J. Lawson Turcotte, BYU–Idaho. 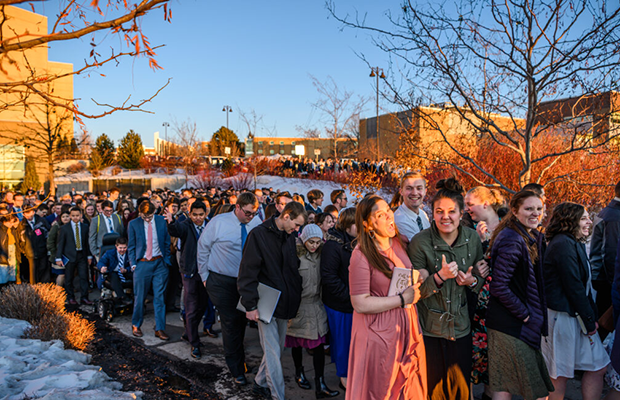