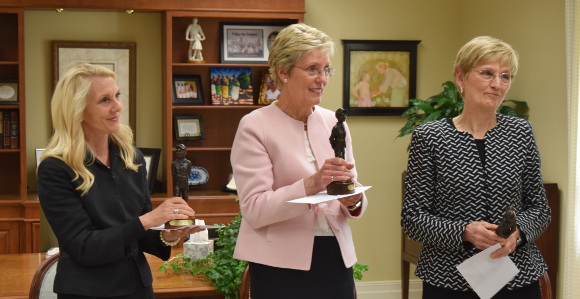 “The insight and wisdom of Sister Wixom, Sister Esplin, and Sister Durham provided tremendous value … to the entire movement. We’re grateful and appreciative of their time and talents.” —Mike Surbaugh, chief Scout executive

The Boy Scouts of America recently thanked the former Primary general presidency for its support of the national organization that includes hundreds of thousands of Latter-day Saint boys.

Sister Rosemary M. Wixom, Sister Cheryl A. Esplin, and Sister Mary R. Durham were honored on April 1, 2016, for their service to the BSA at a special presentation at Church headquarters. All three women, during their time in the Primary general presidency, served as national volunteers with the BSA. Sister Esplin and Sister Durham were members of the BSA’s National Advisory Council, while Sister Wixom served as a member of the BSA National Executive Board.

The three women were released from their callings on April 2, during the 186th Annual General Conference of the Church.

Mike Surbaugh, chief Scout executive, and Mark R. Francis, LDS-BSA relationships director, made the presentation to the women in the Primary offices during general conference weekend to thank them for their service. Each woman received a bronze statue of a Cub Scout sculpted by artist Kenneth William Packer.

“Sister Wixom, in addition to her duties and responsibilities with the Church, continually went the extra mile to serve in a leadership capacity on the BSA National Executive Board,” said Mr. Surbaugh. “The insight and wisdom of Sister Wixom, Sister Esplin, and Sister Durham provided tremendous value and leadership to the entire movement. We’re grateful and appreciative of their time and talents and true loving spirit to see Scouting remain a positive force for America’s youth.”

All three of the Primary leaders mentioned the wonderful relationships they made with other Scouting leaders through their involvement on the national level.

“Friends that we will miss,” said Sister Wixom. “But we will still be cheering for you from the sidelines, and you are in our prayers,” she said in reference to the BSA leadership.

While all general Primary presidents since Sister LaVern Parmley have served on national BSA committees, Sister Wixom is the first to serve since Sister Parmley on the National Executive Board.

The Young Men general presidency, who all serve on national BSA committees and the National Advisory Council, also attended the presentation.

More than 400,000 boys participate in Church-sponsored Scout units, including some 131,400 Primary-age boys.