President Monson served as president of the Church’s Canadian Mission, headquartered in Toronto, Ontario, from 1959 to 1962. Prior to that time he served in the presidency of the Temple View Stake in Salt Lake City, Utah, and as a bishop of the Sixth-Seventh Ward in that stake.

President Monson served in the United States Navy near the close of World War II. He married Frances Beverly Johnson (1927-2013) on October 7, 1948, in the Salt Lake Temple. They are the parents of three children, with eight grandchildren and 12 great-grandchildren.

Professionally, President Monson has had a distinguished career in publishing and printing. He became associated with the Deseret News in 1948, where he served as an executive in the advertising division of that newspaper and the Newspaper Agency Corporation. Later he was named sales manager of the Deseret News Press, one of the West’s largest commercial printing firms, rising to the position of general manager, which position he held at the time of his appointment to the Quorum of the Twelve in 1963. He served for many years as chairman of the board of Deseret News Publishing Co. President Monson is a past president of Printing Industry of Utah and a former member of the board of directors of Printing Industries of America.

With his broad business background, President Monson served for many years as a board member of several prominent businesses and industries. He currently serves as chairman of the LDS Church Board of Education and Board of Trustees.

Since 1969 President Monson has served as a member of the National Executive Board of Boy Scouts of America.

President Monson has held membership in the Utah Association of Sales Executives, the Salt Lake Advertising Club, and the Salt Lake Exchange Club.

For many years, President Monson served as a member of the Utah State Board of Regents, the body which governs higher education in the State of Utah. He also served as an officer in the Alumni Association of the University of Utah.

In December 1981, President Monson was appointed by President Ronald Reagan to serve on the President’s Task Force for Private Sector Initiatives. He served in this capacity until December 1982, when the work of the task force was completed.

President Monson was awarded the University of Utah’s Distinguished Alumnus Award in 1966. He is also the recipient of the Boy Scouts of America’s Silver Beaver Award (1971), its prestigious Silver Buffalo Award (1978), the Bronze Wolf (1993; international Scouting’s highest award), and the Silver Fox Award from Scouts Canada (2011). In 1997 he received the Minuteman Award from the Utah National Guard, as well as Brigham Young University’s Exemplary Manhood Award. In 1998 he and Sister Monson were each given the Continuum of Caring Humanitarian Award by the Sisters of Charity of St. Joseph Villa. In 2000 he received the Joseph and Hyrum Smith Award as "Communicator of the Year" from the LDS Public Relations Society. In 2005 he was presented with the Legacy of Life Award by the Heart and Lung Research Foundation, which is an entity of the Deseret Foundation. In 2007 he received Rotary's Worldwide Humanitarian Award. He has received awards from four chapters of the BYU Management Society. 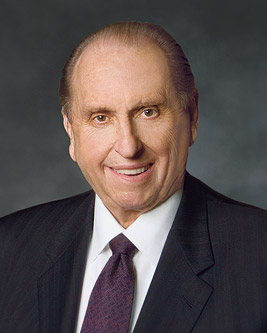