Elder Malm Laid to Rest Near Missionary Graves in Sweden 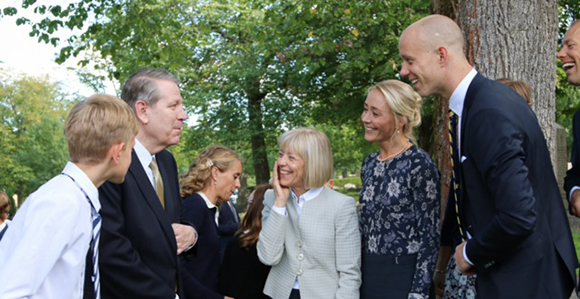 Members of the family of Elder Per G. Malm interact with Elder Donald L. Hallstrom at the grave site of Elder Malm.

“I have a great love for him as a friend and a fellow servant in the Lord’s Church, and for his beloved wife, Agneta, and for his wonderful family.” —Elder Patrick Kearon of the Seventy

Elder Per G. Malm, the first General Authority to have been called from Sweden, was laid to rest August 16 near the graves of two men who died while serving as missionaries for the Church in the 1890s.

Elder Malm, whose six-year ministry as a General Authority Seventy focused largely on missionary work, died of cancer July 26 at his home in Göteborg. He was 67.

Elder Donald L. Hallstrom of the Presidency of the Seventy and Elder Patrick Kearon, General Authority Seventy and President of the Church’s Europe Area, spoke at a funeral held in the Västra Frölunda Ward in Göteborg, Elder Malm’s home ward.

Other speakers were Arne Hedberg, former president of the Sweden Stockholm Mission and former stake president in Göteborg, and Sofia Karlsson, a daughter of Elder Malm.

Elder Hallstrom read a letter of condolence written by the First Presidency to Elder Malm’s widow, Sister Agneta Malm, and her family. Elder and Sister Malm have eight children and 25 grandchildren.

Elder Hallstrom said one cannot mention Elder Malm without mentioning Sister Malm at the same time, as they were inseparable. He expressed assurance that Elder Malm will continue to lead and guide his family from the other side of the veil.

He said Elder Malm had a gift of understanding true principles and had unwavering and firm faith in the principles of the gospel.

Elder Kearon noted that he and Elder Malm were sustained as General Authority Seventies on the same day, April 3, 2010. He said they were assigned to serve at Church headquarters in Salt Lake City during the first few years, serving on several committees together, and that they had lunch together nearly every day.

“I have a great love for him as a friend and a fellow servant in the Lord’s Church, and for his beloved wife, Agneta, and for his wonderful family,” Elder Kearon said.

He added that he was greatly impressed by Elder Malm’s capacity to understand true principles and teach them to Church members worldwide.

Elder Kearon thanked Elder Malm and his entire family for their great example and love.

Neal Baker performed a hymn written and performed when Elder and Sister Malm were leaving to preside over the Norway Oslo Mission in 2003.

Burial was in the Western Cemetery in Göteborg. The grave was dedicated by Daniel Malm, Elder Malm’s eldest son and a counselor in the Göteborg Sweden Stake presidency.

The grave is approximately 50 meters (54 yards) from the graves of Elder John A. Qvist and Elder Jon H. Jensen. Elder Qvist died in 1890 and Elder Jensen in 1898, each while serving a mission in Göteborg.

Over the years, local Church members, particularly youth, have been looking after the graves, washing and cleaning the large gravestone and filling each character of the inscription with gold paint.

The last General Authority to visit the grave was Elder Dean L. Larsen of the Seventy, who came with his wife in 1984. 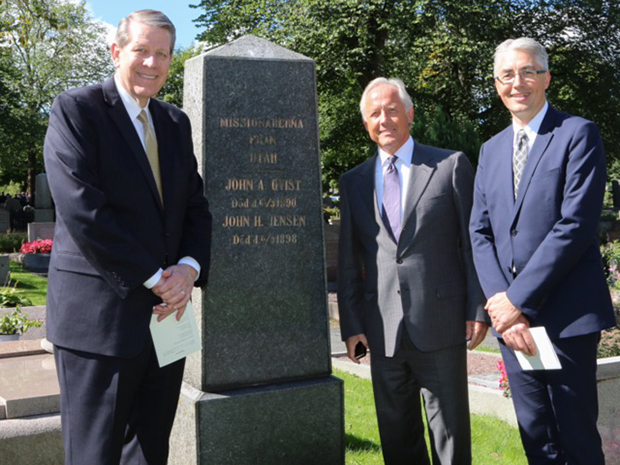 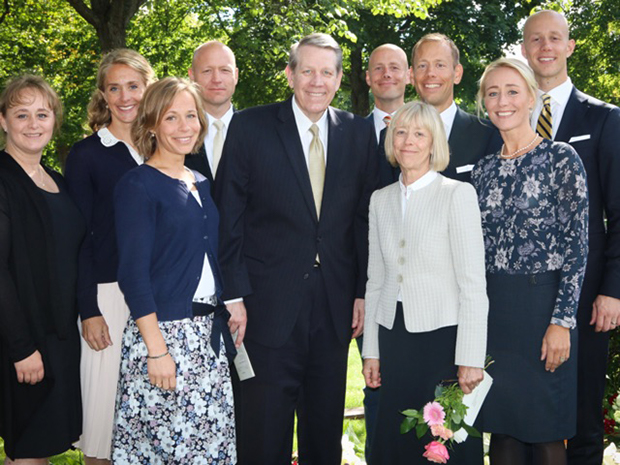 Elder Donald L. Hallstrom, center, stands with Sister Agneta Malm, widow of Elder Per G. Malm, and with other members of the Malm family. Photo by Leif Mattsson. 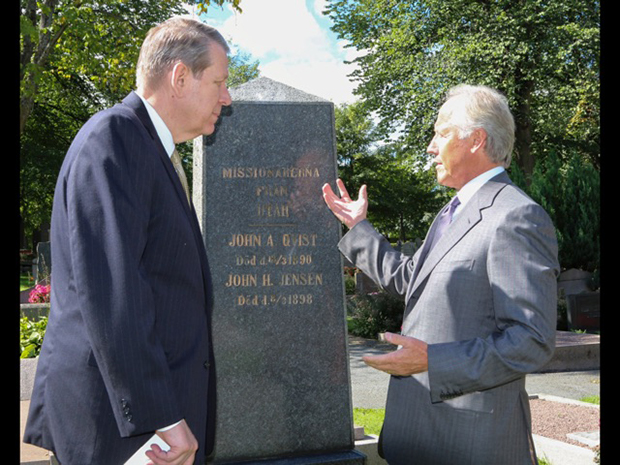 Leif Mattsson, right, tells Elder Donald L. Hallstrom about two LDS missionaries who died while serving in Göteborg, Sweden, in the 1890s. A stone marks their graves. Elder Per G. Malm was buried near the graves on August 16. Photo by Leif Mattsson.