Elder Christofferson Calls for Defense of Freedom of Association, Religion 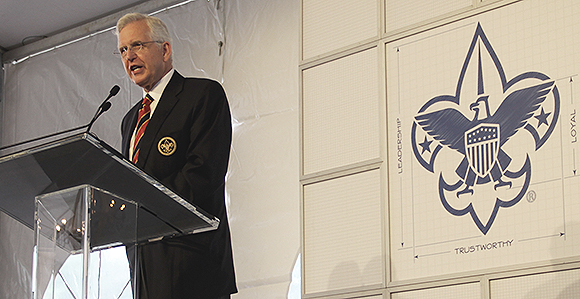 Elder D. Todd Christofferson speaks about the freedom to associate during a luncheon following the June 15 groundbreaking ceremony of the Thomas S. Monson Leadership Excellence Complex in West Virginia.

“We are in the middle of a rights revolution. … But sometimes these supposed rights are little more than demands that government forces others to conform to society’s new moral preferences.” —Elder D. Todd Christofferson of the Quorum of the Twelve Apostles

Elder D. Todd Christofferson of the Quorum of the Twelve Apostles recently spoke to a luncheon audience of Boy Scout leaders and executives gathered here from around the nation.

Moments earlier, he and other Church and Scouting officials had participated in the June 15 groundbreaking of the future Thomas S. Monson Leadership Excellence Complex. (See related story.) The Church’s 16th President, observed Elder Christofferson, has long utilized leadership to serve and spiritually feed others.

“That’s true character,” he said. “It’s little wonder that over his 76 years of association with Scouting, President Monson has received every major award Scouting has to offer. Scouting, after all, has always been about recognizing and building character.”

The positive influence of the Scouting movement in cultivating leadership skills and building character has been vast, he added.

“We can’t fully imagine how many boys owe their lives to Scouting and how many have made positive contributions to society because of the principles they learned in Scout troops. America is a stronger, better country because dedicated individuals—and that includes you here today—built and sustained the Scouting movement.”

Elder Christofferson said the American Scouting movement, and all the good it has done, has depended on the oft-forgotten freedom of the right of ordinary citizens—guaranteed by the First Amendment to the U.S. Constitution—to form voluntary organizations.

“Freedom of association has been at the heart of Scouting since its inception,” he said. “Indeed, without it, there can be no Scouting.”

There’s much talk these days about “new rights.”

“We are in the middle of a rights revolution. Sometimes the alleged new rights are important to correct injustices. But sometimes these supposed rights are little more than demands that government forces others to conform to society’s new moral preferences.”

The fundamental right of association is different, he declared.

There are some things government cannot do—and should not do, he said.

“Private and voluntary civic organizations made up of like-minded individuals who strongly believe in their cause are much better situated to bring forward new ideas or defend old ones, to develop the most persuasive arguments to support and explain those ideas, and to take action to galvanize the public to support them,” he said. “Consequently, civic organizations are essential to the free exchange of ideas and to the broad discussion and debate that must occur if a society is to explore important and sometimes controversial concepts in a free and peaceful way.”

The right of association is essential to the very existence of civic organizations, he added. It empowers ordinary individuals. It produces social possibilities and amplifies free speech. “Within voluntary associations—from religious institutions to charitable organizations to civic groups like Scouting—people can refine their characters and find the meaning of their lives.”

The right to freely associate, declared Elder Christofferson, “is a great bulwark against tyranny.” It provides a buffer between the “private realm of one’s personal life and the mega-institutions of government and the marketplace.”

The Supreme Court, he added, has said that the Constitution protects the “right to associate with others in pursuit of a wide variety of political, social, economic, educational, religious, and cultural ends.”

Unfortunately, freedom of association is under assault.

Today the Boy Scouts of America—and many other similar organizations—face continued pressure from government and special interest groups to conform to newly emerging societal trends, he said. “In this environment, too much pressure is put on BSA to abandon its special mission as a civic organization created to imbed and perpetuate specific moral views. And there is too little support and appreciation for the crucial role that it and similar organizations play in society.”

Like freedom of association, freedom of religion is also enduring attacks.

“Those two fundamental rights often lead to beliefs, morals, speech, and ways of life that run counter to the dominant culture,” he said. “Those rights take power away from government and the elite and disperse it among many diverse and free institutions run by ordinary citizens. Those rights limit the power of the state to impose its orthodoxies and to punish dissent. Regrettably, those who wield power and influence are often suspicious of such freedoms and seek to limit them. And they have had substantial success over the past few years.”

Elder Christofferson concluded with a call to defend such vital freedoms such as association and religion.