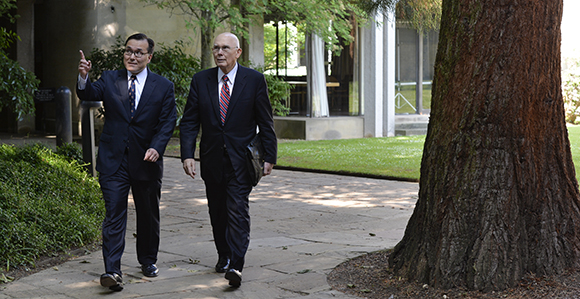 Elder Dallin H. Oaks walks across the campus of England’s Oxford University, where he gave an address on Thursday, June 9.

“None of us can ignore the importance of religion globally—in politics, conflict resolution, economic development, humanitarian relief, and more,” Elder Dallin H. Oaks declared in a lecture at Oxford University on June 9.

Elder Oaks, a member of the Quorum of the Twelve Apostles, titled his address “The Complementary Function of Religion and Government in a Global Setting.”

He said 84 percent of the world’s population identifies with a particular religion, yet 77 percent of the world’s inhabitants live in countries with high or very high restrictions on religious freedom. “Understanding religion and its relationship to global concerns and to governments is essential to seeking to improve the world in which we live,” Elder Oaks said.

He spoke for the ideal in which the freedoms religion seeks to protect are God-given and inherent but are implemented through mutually complementary relationships with governments who seek the well-being of all their citizens.

“Consequently, a government should secure religious freedom for its citizens. As stated in Article 18 of the U.N.’s influential Universal Declaration of Human Rights, ‘Everyone has the right to freedom of thought, conscience and religion; this right includes freedom to change his religion or belief, and freedom, either alone or in community with others and in public or private, to manifest his religion or belief in teaching, practice, worship and observance’ (United Nations Universal Declaration of Human Rights 1948).”

Elder Oaks said the responsibilities of religion are to observe the laws and respect the culture of the country that secures its freedoms. “When religious freedoms are secured, such a response is a debt of gratitude gladly paid,” he said.

“If there were uniform acceptance and application of these general principles, there would be no need for the discussions that bring us together. But as we all know, our world is bedeviled with conflicts on these general principles. For example, prominent voices are now challenging the whole idea of unique protections for religion. …

“Other voices seek to marginalize religion and believers, such as by limiting religious freedom to teaching in churches, synagogues, and mosques, while denying the exercise of religious beliefs in the public square. Such attempts of course violate the Universal Declaration’s assurance of the right to manifest religion or beliefs ‘in public or private.’ The free exercise of religion must also apply when believers act as a community, such as by their efforts in education, medicine, and culture.

“Religious beliefs and practices are also criticized as irrational and contrary to important government and social goals. I, of course, maintain that religion is uniquely valuable to society. As one atheist admitted in a recent book, 'One does not have to be a religious believer to grasp that the core values of Western Civilization are grounded in religion, and to be concerned that erosion of religious observance therefore undermines these values’ (Melanie Phillips, The World Turned Upside Down: The Global Battle over God, Truth, and Power [2010], xiii).”

One of those “core values” is the concept of inherent human dignity and worth, Elder Oaks noted. He then gave seven other examples of the social values of religion:

1. “Many of the most significant moral advances in Western civilization have been motivated by religious principles and persuaded to official adoption by pulpit-preaching. 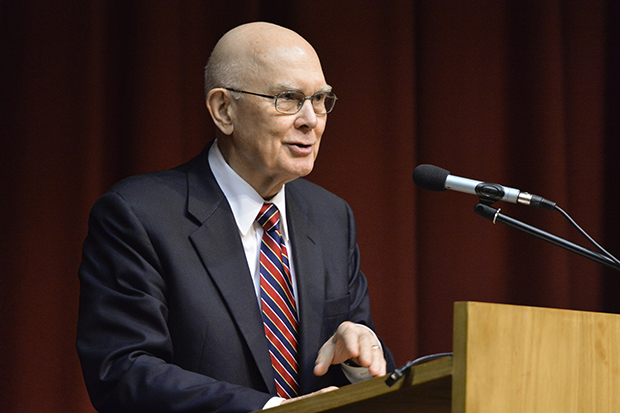 2. “In the United States, our enormous private sector of charitable works—education, hospitals, care for the poor, and countless other charities of great value—originated with and is still sponsored most significantly by religious organizations and religious impulses.”

3. “Western societies are not held together primarily by the overall enforcement of laws, which would be impractical, but most importantly by citizens who voluntarily obey the unenforceable because of their internal norms of correct behavior. For many, it is religious belief in right and wrong and anticipated accountability to a higher power that produces such voluntary self-regulation.

4. “Along with their private counterparts, religious organizations serve as mediating institutions to shape and temper the encroaching power of government on individuals and private organizations.”

5. “Religion inspires many believers to service to others, which, in total, confers enormous benefit on communities and countries.”

6. “Religion strengthens the social fabric of society. As Rabbi Jonathan Sacks has taught: ‘[Religion] remains the most powerful community builder the world has known. … Religion is the best antidote to the individualism of the consumer age. The idea that society can do without it flies in the face of history’ (Jonathan Sacks, “The Moral Animal,” The New York Times, Dec. 23, 2012, nytimes.com/2012/12/24/opinion/the-moral-animal).”

7. “Clayton M. Christensen, who is hailed as a worldwide ‘thought leader’ on business management and innovation, has written that ‘religion is the foundation of democracy and prosperity’” (see http://www.mormonperspectives.com/2011/02/08/religion-is-the-foundation-of-democracy-and-prosperity).”

Speaking of the complementary responsibilities that religions and believers owe their governments, Elder Oaks said that governments have an overriding interest in preserving the security of their national borders and defending the health and safety of their citizens.

“No country need offer sanctuary to organizations that promote terrorism,” he said. “Religious freedom is no barrier to government power in any of these circumstances.”

He said the complementary functions of religion and government are being severely tested in Europe. He spoke of the massive inflow of refugees of mostly Muslim religion and culture into countries with different culture and different religious challenges.

He asked what religion and religious organizations can contribute to help refugees and the countries that have received them over the short term and long term. He gave some examples of what The Church of Jesus Christ of Latter-day Saints has done and is continuing to do.

He explained that Latter-day Saints “take literally Christ’s teaching that we should give food to the hungry and shelter to the stranger (see Matthew 25:35). We are likewise directed by a modern revelation from the same source to 'remember in all things the poor and the needy, the sick and the afflicted, for he that doeth not these things, the same is not my disciple’ (D&C 52:40).”

“Care for the poor and needy is not optional or incidental in our Church. We do this worldwide. For example, in the year 2015 we had 177 emergency response projects in 56 countries. In addition, we had hundreds of projects that impacted more than a million people in seven other categories of assistance, such as clean water, immunization, and vision care. For more than 30 years the magnitude of these efforts has averaged about 40 million dollars a year.”

Elder Oaks said that the Church rigorously separates its humanitarian services from its worldwide missionary efforts. “Our humanitarian aid is given without regard to religious affiliation, because we want our missionary teaching to be received and considered without influence from force or food or other favors.”

He asked, “What can church organizations do in addition to what the United Nations or individual countries can do?” He referred to the Church's experience, saying that while its membership—half in the United States and half elsewhere—is small in terms of capacity to help, it has three great advantages that magnify its impact.

“First, the service traditions of our membership give us a resource of committed and experienced volunteers. To translate that into numbers, last year our volunteers donated over 25 million hours of labor in our welfare, humanitarian, and other Church-sponsored projects, not counting what our members did privately.

“Second, through our members’ financial contributions to humanitarian causes we come to the table with our own funding. While we have the ability to operate independent of bureaucratic structures and appropriations, we are also eager to coordinate our efforts with individual governments and with United Nations agencies for the greatest impact. We call upon them increasingly to look to the strengths of religious organizations.

“Third, we have a global grassroots organization that can be mobilized immediately. For example, on the worldwide problem of refugees, last March our First Presidency and our Relief Society, Young Women, and Primary presidents sent messages to members worldwide reminding us of the fundamental Christian principle of helping the poor and the ‘stranger’ in our midst (Matthew 25:35). They invited women of all ages to join in helping refugees in their local communities.“

“In 2015, in full partnership with the British-based AMAR Foundation, LDS Charities constructed primary health care centers for the Yezidi minority in northern Iraq who were brutally targeted by ISIS,” he said. “These health care centers—fully equipped with laboratory, urgent care, pharmacy, and ultrasound—bring relief to a population hurting both physically and spiritually. They employ Yezidi medical professionals and volunteers who aid their own people in culturally sensitive ways.”

Elder Oaks spoke of the earthquake and resulting tsunami in Southeast Asia on December 26, 2004, that killed 230,000 people in 14 countries. “Our LDS Charities arrived on site one day later and worked actively for five years,” he said. “In the heavily affected Banda Aceh region alone it built 900 permanent houses, 24 village water systems, 15 primary schools, three medical centers, and three community centers that doubled as mosques. Additionally, we supplied copies of the holy Quran and prayer rugs to help those communities in their worship.”

While in England Elder Oaks took part on June 8 in a panel discussion before the All Party Parliamentary Group for International Freedom of Religion. The group is an informal caucus of ministers of Parliament from multiple parties formed to stimulate discussion and ideas about how United Kingdom foreign policy impacts international religious freedom.

Elder Oaks told members of the British Parliament that religious freedom allows The Church of Jesus Christ and other faiths to do good around the world. ”We want the blessings of religious freedom to be claimed by all the inhabitants of this planet, and we are far short of that at present,“ he said.

The group's co-chair, Baroness Elizabeth Berridge, a member of the Conservative Party in the British House of Lords, expressed gratitude for the contributions of Elder Oaks and another panelist, Princeton law professor and noted American Catholic Robbie George, a former chairman of the U.S. Commission for International Religious Freedom.

”With Professor George we have the academics, the academic input to what is happening here,“ the baroness said, ”so it is essential that people like LDS and BYU are around the table, because otherwise Parliamentarians like myself, we don't have access to the best of thinking.“ 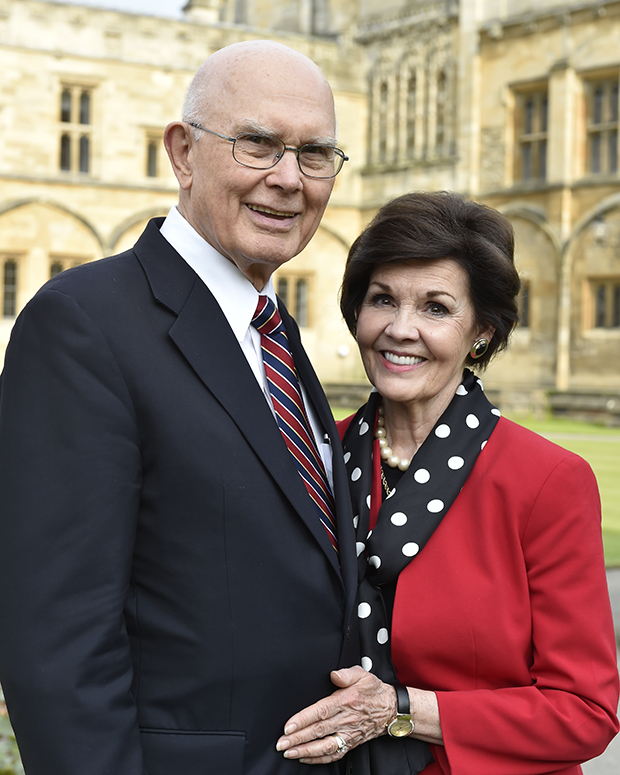