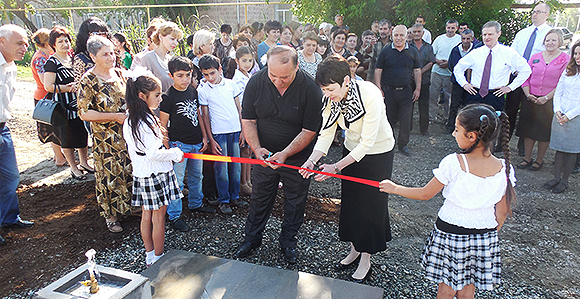 Sister Susan Bednar helps cut the ribbon marking the completion of a Church-sponsored water project in the Armenian village of Hovatashen on May 29, 2014.

“It is a never-ending strength to my own faith to see the restored gospel of Jesus Christ influence people for good, whether you are in Montana, Madrid, or Mongolia.” —Elder David A. Bednar of the Quorum of the Twelve

Returning from assignments to the Europe East Area, an Apostle, a Seventy, and a counselor in the Presiding Bishopric reaffirmed that the gospel of Jesus Christ unites peoples of all backgrounds, cultures, and languages.

Elder David A. Bednar of the Quorum of the Twelve Apostles, Elder Ronald A. Rasband of the Presidency of the Seventy, and Bishop Gérald Caussé of the Presiding Bishopric traveled to the Europe East Area from May 22 to June 2. Included in their responsibilities were an area review, two priesthood leadership conferences, stake and district conferences, and meetings with members and missionaries.

Elder Bednar, Elder Rasband, and Bishop Caussé were together for the Europe East Area review, which was held in Moscow, Russia, on May 23, and then separated to go to various other meetings in the area.

Elder Larry R. Lawrence of the Seventy and president of the Europe East Area and his counselors, Elder Randall K. Bennett of the Seventy, and Elder Gvido Senkans, an Area Seventy, participated in the area review and other meetings.

During a recent trip to the Europe East Area, Elder David A. Bednar presided over a priesthood leadership conference in Riga, Latvia, above.

“The fascinating thing about the priesthood leadership conference in Riga is that we participated in an Internet broadcast originating from Latvia, which included brethren in Armenia, Bulgaria, Belarus, Estonia, Lithuania, Ukraine, Turkey, and the eastern portion of Russia, all the way to the Pacific Ocean. This historic conference was translated into nine languages across 10 time zones.”

While in Armenia, Elder and Sister Bednar went to the small village of Hovatashen, where they participated in an event marking the completion of a Church-sponsored water project. Sister Bednar cut the ribbon during the ceremony, the village mayor and a farmer gave remarks, and a woman declared her gratitude that she will not need to spend so much time bringing water to her house. 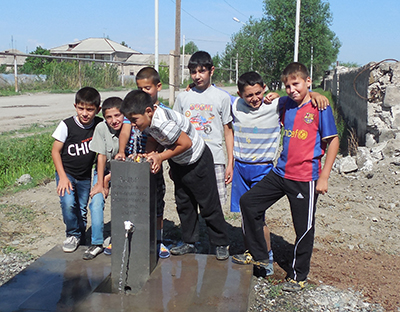 Children pose after a ceremony in Hovastashen, Armenia, on May 29, 2014, marking the completion of a Church-sponsored water project.

Elder Bednar reflected on the opportunity to meet and address members and investigators of the gospel in many countries. “I think we assume that people in different lands and cultures, who speak diverse languages, are dissimilar. My observation is that people are pretty much the same. Husbands love their wives, and wives love their husbands. Parents love their children and want to provide a better life for their children. I find we are more similar than we are different.

“It is a never-ending strength to my own faith to see the restored gospel of Jesus Christ influence people for good, whether you are in Montana, Madrid, or Mongolia. What system of belief conceived by the human mind could accomplish that? It is not possible. Only truth from God has that impact on people from such different places all over the world. It is remarkable to see. …

Elder Ronald A. Rasband, seated at right, presides at a meeting for missionaries. There are 12 young elders and four missionary couples serving in the country of 86 million people.

“Whether ministering among people in South America, Asia, the Europe East Area, or other areas in the world, we bear our witness of the importance of faith in the Savior and the blessings of His Atonement.

“The Church in these Eastern European countries grows steadily, not necessarily swiftly as it does in some areas, but these are faithful, stalwart, valiant Latter-day Saints. They live their religion in very unpredictable circumstances.”

Elder Rasband, traveling with his wife, Sister Melanie T. Rasband, went on assignments that took him to Latvia, Lithuania, and Turkey, as well as Moscow and Samara, Russia.

Reflecting on his travels, he spoke of how the gospel unifies people.

He said that when the Church recently removed missionaries from the Donetsk region in Ukraine, the elders and sisters assigned all their investigators to local members. “While we were there (in the Europe East Area), members baptized three of those investigators. That signifies that the work is moving forward, even though the missionaries had been evacuated because of the strife in the region.”

Elder Rasband told of a multibranch conference in Samara. “I wondered how the tensions between Russia and Ukraine would play out in the middle of Russia. … Then a humble Russian man offered the opening prayer, in essence, saying, ‘Heavenly Father, we pray for our brothers and sisters in Ukraine. We pray they will be blessed with peace and happiness, that they will know that their brothers and sisters here in Russia care for them and are praying for them.’ 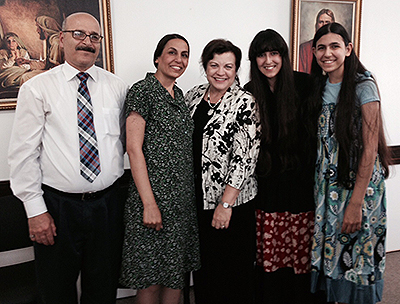 Sister Melaine Rasband, center, poses for a photo with a family of Church members after she and her husband, Elder Ronald A. Rasband, attended a meeting in Istanbul, Turkey.

“That is the spirit of what we all need to be. We’re one Church, one faith, one Lord, one baptism. We’re not limited by political boundaries.”

In Turkey, Elder Rasband spoke to members in branches in Ankara and Istanbul.

“In the congregations were Iranians, Iraqis, Turks, expatriates—people from many backgrounds and cultures. The scripture that kept coming to my mind was Paul’s epistle to the Saints in Ephesus: ‘Now therefore ye are no more strangers and foreigners, but fellowcitizens with the saints, and of the household of God; and are built upon the foundation of the apostles and prophets, Jesus Christ himself being the chief corner stone’” (Ephesians 2:19-20). 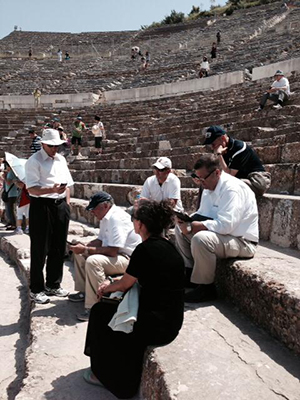 While in Turkey, Elder Ronald A. Rasband and others made a brief visit to Ephesus, where the Apostle Paul taught members of the early Church. 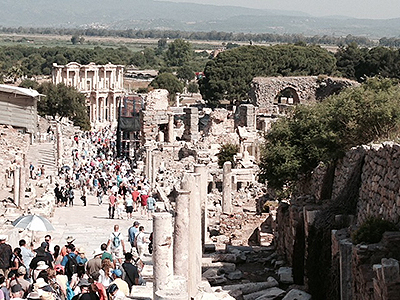 Ephesus was a thriving city when the Apostle Paul visited and taught Saints during the early Christian era.

Elder Rasband said the Church has been reintroduced in Turkey during the past two years. “Here is a country of 86 million people. We have 12 young missionaries—six in Ankara and six in Istanbul—and four couples serving in Turkey.”

Bishop Caussé, who traveled with his wife, Sister Valérie Caussé, said a recurring theme of messages he and the other Brethren delivered is that membership in the Church transcends differences. “As we enter the fold of Christ, we all become brothers and sisters alike,” he said.

His assignments took him to Riga, Latvia; Moscow, Yekaterinburg, and St. Petersburg, Russia; and Tallin, Estonia.

Bishop Caussé said he was impressed with the resilient faith of Church members in the area. “They live in countries where they are a small minority. Their faith and willingness to share the gospel with others is very impressive.”

As an example, he described the member meeting in Tallin, Estonia, as “feeling like a family home evening. There was a strong spirit there. The link between the missionaries and members was striking. The missionaries knew all the members. There is a lot of teamwork.”

The mission that encompasses Estonia covers three Baltic countries and Belarus and has four languages: Lithuanian, Latvian, Estonian, and Russian. “It is interesting how they resolve differences of cultures, languages, and backgrounds within the family of the Church,” he said. “When you get there, you have a beautiful vision of how the gospel goes beyond borders to really unite peoples.”