Elder Larry R. Lawrence was sustained as a General Authority Seventy of The Church of Jesus Christ of Latter-day Saints on April 3, 2010. At the time of his call, he had been serving as a member of the Fifth Quorum of the Seventy in the North America West Area. He is currently serving as Assistant Executive Director of the Priesthood and Family Department and in the leadership of the Middle East and Africa North Areas.

Elder Lawrence earned a bachelor of science degree in agricultural biochemistry from the University of Arizona in 1969. In 1973, he received a doctor of medicine degree, also from the University of Arizona. He completed an ophthalmology residency at Valley Medical Center in Fresno, California, in 1977. He has been an ophthalmologist at Lawrence Eye Associates since 1977.

Since joining the Church in 1970, Elder Lawrence has served in numerous callings, including elders quorum president, bishop, high councilor, counselor in a stake presidency, stake president, stake mission president, and president of the Russia Novosibirsk Mission (2001–2004).

Larry Ray Lawrence was born in Cheverly, Maryland, on August 25, 1947. He married Laurel Stott in November 1971. They are the parents of six children. 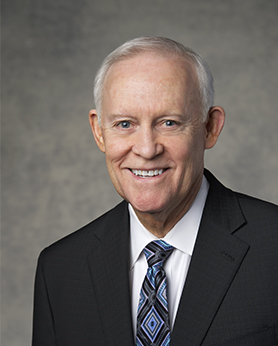