The Prophet Joseph Smith returned from Missouri to Kirtland, Ohio, in August 1831. In October 1831, Ezra Booth began publishing letters criticizing the Prophet and the Church. During a Church conference held in Hiram, Ohio, in November 1831, Joseph Smith and other elders of the Church discussed plans to publish a volume called the Book of Commandments, which would contain the revelations the Lord had given the Prophet up to that time. In February 1832, while Joseph Smith and Sidney Rigdon continued working on the translation of the Bible, they had a vision of Heavenly Father, Jesus Christ, and the three kingdoms of glory (see D&C 76). About a month later, Joseph and Sidney were brutally attacked, beaten, tarred, and feathered by a mob.

At a Church conference, Joseph Smith and other elders of the Church discussed plans to publish the Book of Commandments.

Joseph Smith and Sidney Rigdon were tarred and feathered by an angry mob in the middle of the night.

“God has promised to reveal truth to our minds and hearts through the Holy Ghost if we diligently seek Him (see D&C 8:2–3). … Heavenly Father has taught us how to acquire spiritual knowledge. …The following three principles can guide us as we seek to learn and understand eternal truth and resolve questions or issues: [1] Act in faith. [2] Examine concepts and questions with an eternal perspective. [3] Seek further understanding through divinely appointed sources” (Doctrinal Mastery Core Document [2018], 3–4). Help students understand these principles throughout the course by exemplifying them in your teaching.

Invite students to look for truths during today’s lesson that can be helpful when they or those they know have questions about the teachings or actions of Joseph Smith and other prophets of God.

Remind students that in June 1831, the Lord commanded the Prophet Joseph Smith to go to Missouri, where the location of the city of Zion would be revealed (see D&C 52:3–4). Some Church members﻿—including Bishop Edward Partridge and Ezra Booth﻿—were critical of Joseph Smith and the Lord’s instructions concerning the land of Zion. On a few occasions, disagreements led to quarrels between some of these men and the Prophet (see D&C 64:1–7; see also The Joseph Smith Papers, Documents, Volume 2: July 1831–January 1833, ed. Matthew C. Godfrey and others [2013], 61–62).

Invite a student to read the following paragraph aloud:

“Shortly after his return to Ohio, Ezra Booth parted ways with the Church in a very public fashion. Because his experience did not match his expectations of how Zion should look or how Joseph Smith should behave, he first wavered and then abandoned his faith. Beginning that October, the Ohio Star, a newspaper located in Ravenna, Ohio, began publishing a series of letters Booth penned, heavily criticizing Joseph Smith and the Church” (Matthew McBride, “Ezra Booth and Isaac Morley,” in Revelations in Context, ed. Matthew McBride and James Goldberg [2016], 134, or history.ChurchofJesusChrist.org).

Display the accompanying image, and explain that it is a photograph of John and Elsa Johnson’s home in Hiram, Ohio, about thirty miles southeast of Kirtland.

Explain that when Joseph Smith returned from Missouri, he and his family lived in this home as guests of the Johnsons. In early November 1831 Joseph Smith convened a conference of elders at the Johnson home to discuss the publication of the revelations. One of the elders in attendance was William E. McLellin.

Remind students that although William McLellin and others who attended the meeting had received testimonies that God spoke through the Prophet Joseph Smith, there were differing opinions about publishing the revelations.

Explain that the Lord’s preface is now recorded in section 1 of the Doctrine and Covenants.

Ask students to divide into pairs or small groups, and give each student a copy of the accompanying handout, “‘A Testimony of the Truth of These Commandments’ (D&C 67:4).” Invite them to follow the instructions on the handout and discuss their answers to the questions on the handout.

After sufficient time, ask students to report the truths they identified. After they respond, write the following truth on the board: God reveals truth through His prophets despite their weaknesses and imperfections.

Invite a student to read aloud the following statement by the Prophet Joseph Smith (1805–44). Before the statement is read, explain that the Prophet made this declaration about six weeks before his death.

“I never told you I was perfect; but there is no error in the revelations which I have taught” (Teachings of Presidents of the Church: Joseph Smith [2007], 522).

Explain that Joseph Smith and Sidney Rigdon continued translating the New Testament while living in John and Elsa Johnson’s home in Hiram, Ohio. As they worked, it became clear that “many important points touching the salvation of man had been taken from the Bible, or lost before it was compiled” (Teachings: Joseph Smith, 217). While meditating on the changes they were inspired to make in John 5:29 concerning the doctrine of resurrection, Joseph Smith and Sidney Rigdon received the marvelous vision recorded in Doctrine and Covenants 76 (see D&C 76:15–19).

Show students the accompanying image of a room in the Johnson home. Explain that this is where the revelation recorded in Doctrine and Covenants 76 was received. 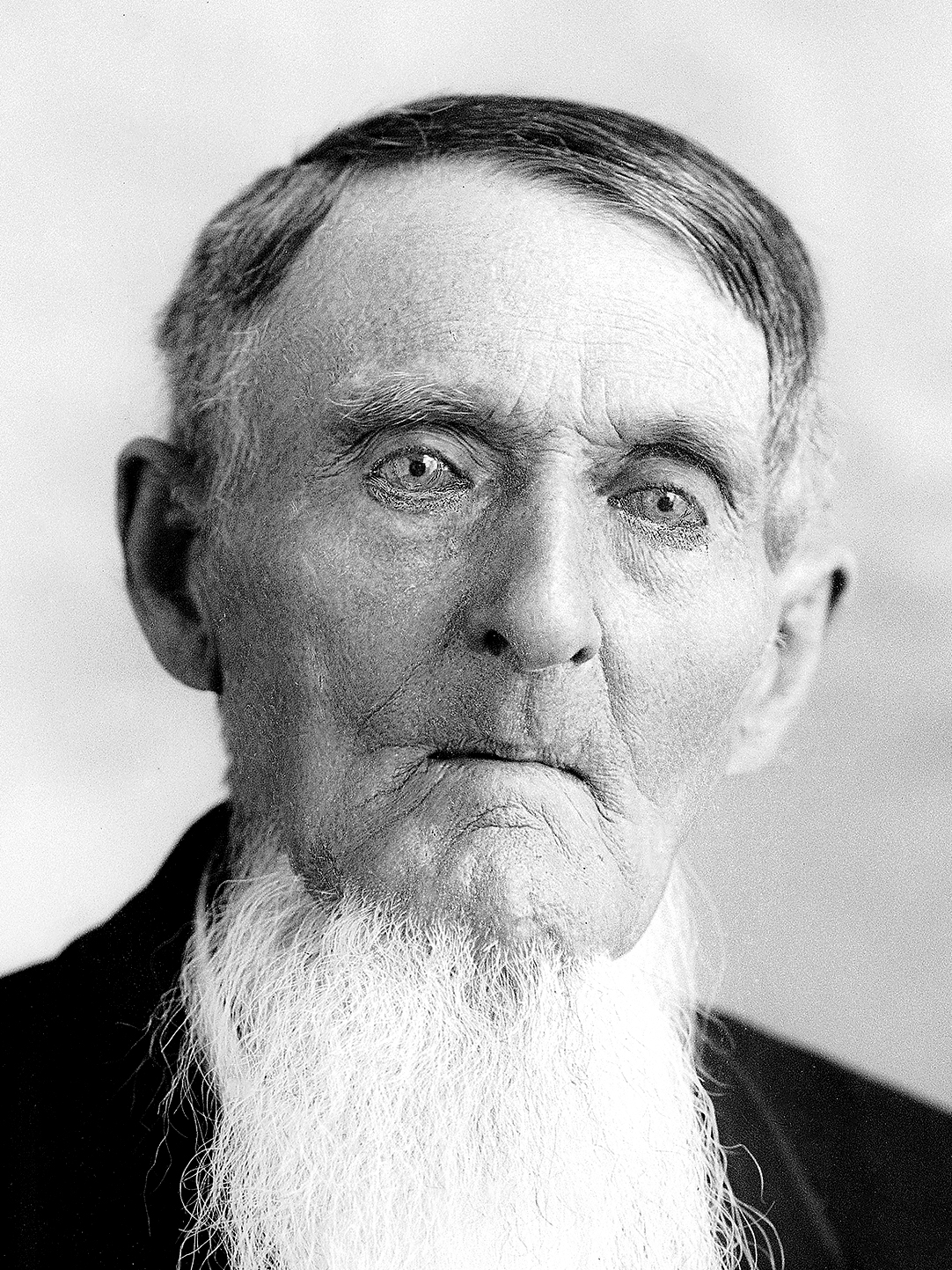 “During the time that Joseph and Sidney were in the spirit and saw the heavens open, there were other men in the room, perhaps twelve, among whom I was one during a part of the time﻿—probably two-thirds of the time,﻿—I saw the glory and felt the power, but did not see the vision. …

“Joseph sat firmly and calmly all the time in the midst of a magnificent glory, but Sidney sat limp and pale, apparently as limber as a rag, observing which, Joseph remarked, smilingly, ‘Sidney is not used to it as I am’” (Philo Dibble, in “Recollections of the Prophet Joseph Smith,” Juvenile Instructor, May 1892, 303–4).

Invite a student to read aloud the following statement by President Brigham Young (1801–77). Ask the class to listen for how some Church members reacted when they learned about the vision:

“When God revealed to Joseph Smith and Sidney Rigdon that there was a place prepared for all, according to the light they had received … , it was a great trial to many, and some apostatized because God was not going to send to everlasting punishment heathens and infants, but had a place of salvation, in due time, for all, and would bless the honest and virtuous and truthful, whether they ever belonged to any church or not. It was a new doctrine to this generation, and many stumbled at it” (Teachings of Presidents of the Church: Brigham Young [1997], 292).

Invite a student to read the following statement aloud. Ask the class to listen for how President Young personally felt when he first learned about the vision.

“My traditions were such, that when the Vision came first to me, it was directly contrary and opposed to my former education. I said, Wait a little. I did not reject it; but I could not understand it” (Brigham Young, in Journal of Discourses, 6:281).

Invite a student to read aloud the following statements by President Young. Ask the class to listen for how he found answers to his questions.

“I [had] to think and pray, to read and think, until I knew and fully understood it for myself” (Brigham Young, in Journal of Discourses, 6:281).

“I can truly say that, in my estimation, no other revelation so glorious was ever given” (Brigham Young, in Journal of Discourses, 8:153).

Invite a student to read aloud the following statement by President Henry B. Eyring of the First Presidency:

“Sometimes we will receive counsel that we cannot understand or that seems not to apply to us, even after careful prayer and thought. Don’t discard the counsel, but hold it close. If someone you trusted handed you what appeared to be nothing more than sand with the promise that it contained gold, you might wisely hold it in your hand awhile, shaking it gently. Every time I have done that with counsel from a prophet, after a time the gold flakes have begun to appear and I have been grateful” (Henry B. Eyring, “Finding Safety in Counsel,” Ensign, May 1997, 26).

After students identify and understand gospel doctrine and principles, they often will not apply them until they feel the truth and importance of them through the Spirit and sense some degree of urgency to incorporate those truths in their own lives. You can help students feel the truth and importance of doctrine and principles by inviting them to reflect on past experiences that have strengthened their testimony of those truths.

Explain that opposition to the revelation on the three degrees of glory contributed to the increasing hostility that Ezra Booth and other former Church members directed toward the Prophet Joseph Smith and Sidney Rigdon.

Ask one or more students to summarize what they learned from their reading of chapter 14 of Saints: Volume 1 concerning the experiences of Joseph Smith and Sidney Rigdon when they were attacked, beaten, tarred, and feathered.

Rather than asking students to summarize this account, you could show part of the film Joseph Smith: The Prophet of the Restoration. Show the movie from time code 26:06 to 28:13, which portrays the attack on Joseph Smith. This film is available on ChurchofJesusChrist.org.

Invite a student to read the following paragraphs aloud. Ask the class to listen for what the Prophet Joseph Smith recalled concerning what happened after the attack and during the following morning, which was the Sabbath:

“My friends spent the night in scraping and removing the tar, and washing and cleansing my body; so that by morning I was ready to be clothed again.

“… The people assembled for meeting at the usual hour of worship, … and among them came also the mobbers. … With my flesh scarified and defaced, I preached to the congregation as usual, and in the afternoon of the same day baptized three individuals” (Teachings of Presidents of the Church: Joseph Smith [2007], 229).

Invite a student to read aloud the following statement by President Wilford Woodruff (1807–98):

“Although [Joseph] had the whole world to contend against and the treachery of false friends to withstand, although his whole life was a scene of trouble and anxiety and care, yet, in all his afflictions, his imprisonments, the mobbings and ill treatment he passed through, he was ever true to his God” (Wilford Woodruff, in Teachings of Presidents of the Church: Joseph Smith [2007], 229).

Conclude by sharing your testimony of the Prophet Joseph Smith’s calling as a prophet of God. Encourage students to follow the Lord’s prophets and to seek to understand and live according to their words.

Invite students to prepare for the next class by reading chapter 15 of Saints: Volume 1.