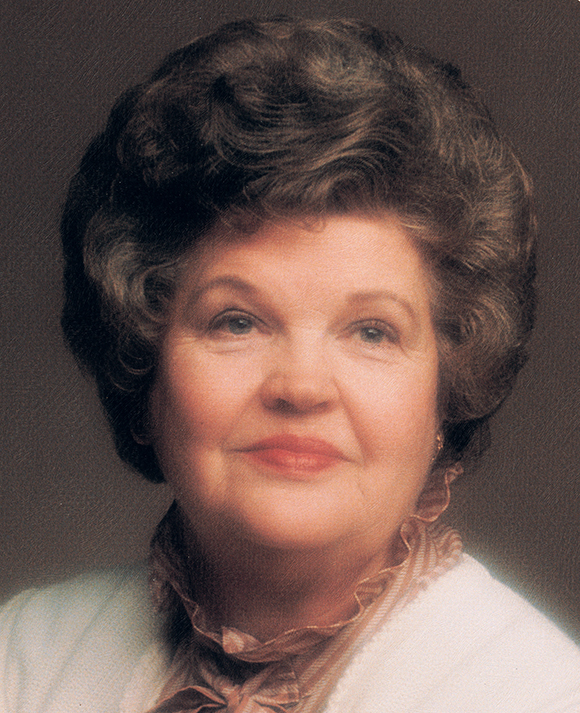 Sister Monson was often described as “quiet and unassuming.”

President Monson has said that his wife always supported him in his Church assignments.

“Never once has she complained,” he said. “Never once. Not in our entire married life has she done anything to keep me from any aspect of my service. I have never received anything but support and encouragement from Frances.” 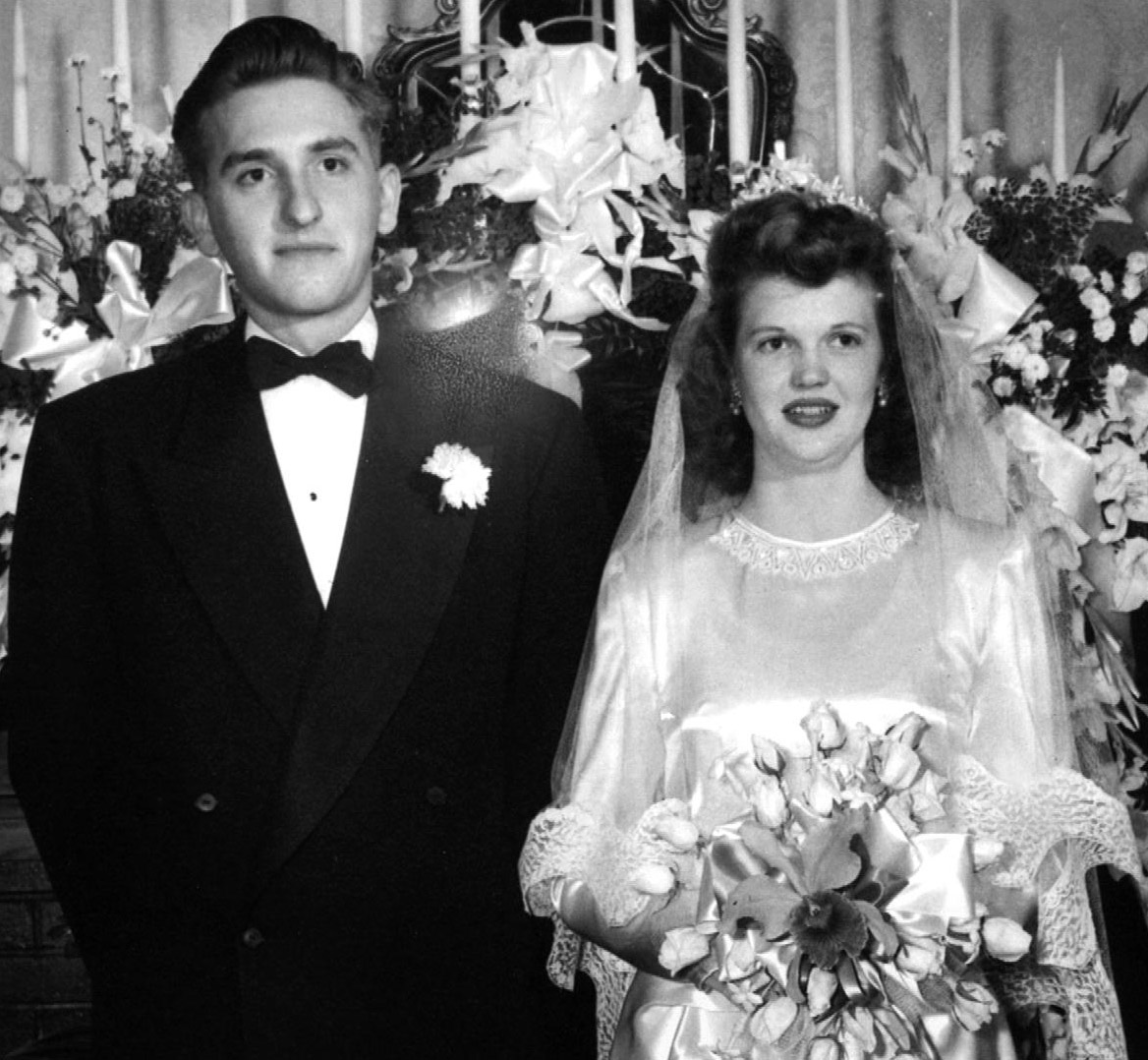 President Monson with his wife, Frances, on their wedding day. © 2011 Intellectual Reserve, Inc. All rights reserved.

Their daughter, Ann Monson Dibb, once said of her mother: “My mother is unlike many of the women of today’s generation. Instead of looking for the recognition of the world, she has always received her acknowledgment of worth from such things as the happy smile of a son or the outstretched hand of a grandchild. President Wilford Woodruff once said that the mother has greater influence over her posterity than any other person can have, and her influence is felt through time and eternity. I am grateful to my mother, thankful for her influence, and pray that I might always be worthy of her love. As I reflect upon the many blessings which I have received as the daughter of an Apostle of the Lord, the one which means the most to me is the gift and blessing of the woman he married, my mother.”

“It has never been a sacrifice to see my husband doing the Lord's work. It has blessed me, and it has blessed our children. He always knew that if it was for the Church, I expected him to do what he had to do."
—Frances J. Monson, wife of President Thomas S. Monson

President Monson first saw his future wife at a University of Utah “Hello Day” dance, catching his first glimpse of her as she danced with another boy. Watching from a distance, he determined to find a way to meet her. A month later, he saw her waiting for a streetcar with some friends and rode the car with them. He called her later that night and arranged their first date. 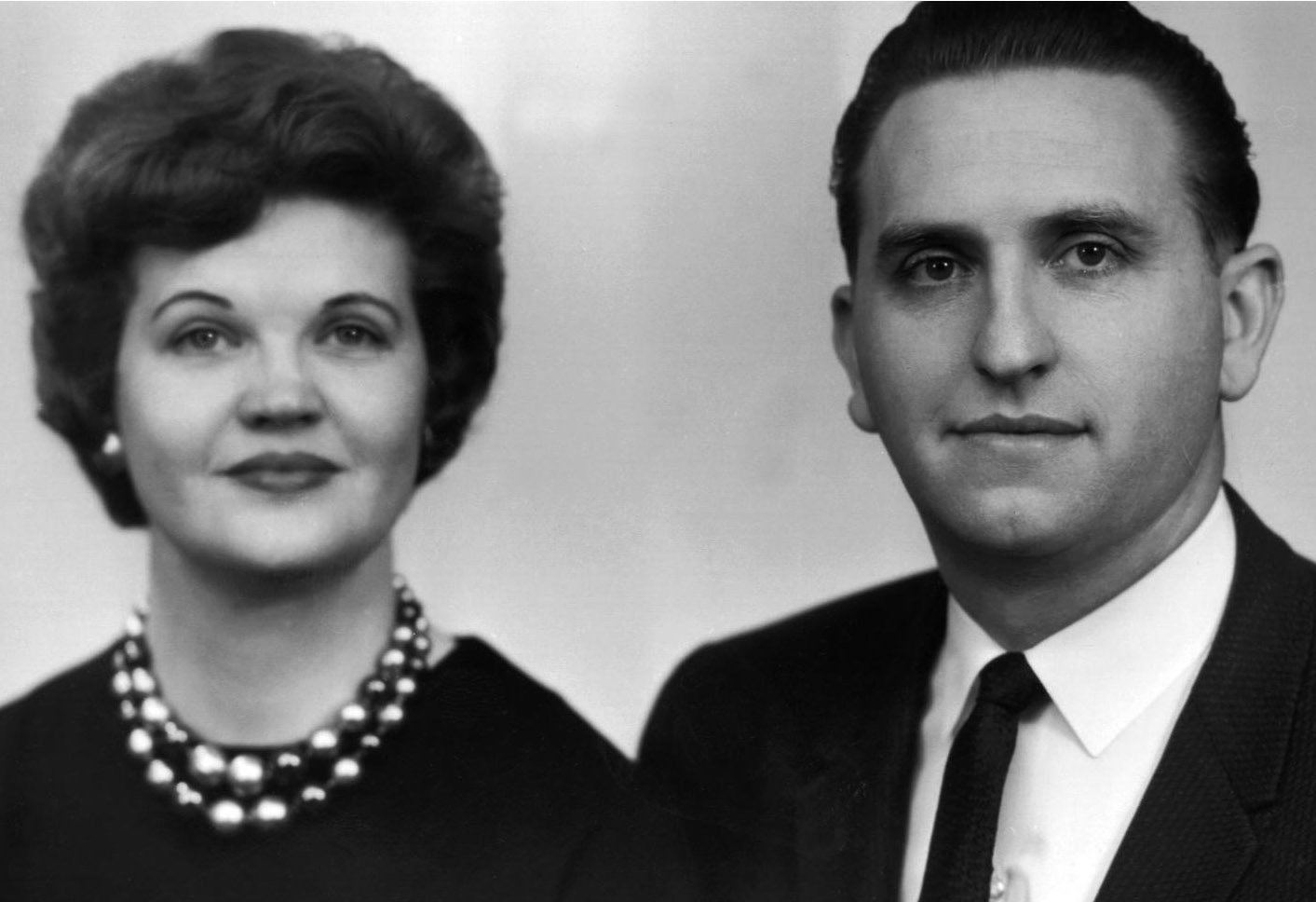 President and Sister Monson served a mission in Toronto from 1959 to 1962. © 2011 Intellectual Reserve, Inc. All rights reserved.

President and Sister Monson’s first date was a dance at the Pioneer Stake building; they double-dated with friends.

They were married on October 7, 1948, in the Salt Lake Temple, four years after they met. President Monson wrote of his date with Frances on New Year’s Eve 1944, remembering she had to be home by 2:00 a.m. because she had to go to work on New Year’s Day. He learned she worked in the copy room at the Deseret News. “Little did I know at that time I would have a career working at the same company,” he noted.

Elias Monson, uncle of President Monson’s father, helped bring the Johnson family into the Church in Sweden while serving a mission there.

“I was soon to learn,” President Monson once said, “Frances was an ideal bishop’s wife. Within a year of our marriage, I was called to the bishopric, later bishop, and subsequently stake and mission responsibilities. In each calling I have constantly discovered new abilities and talents in my wife. She is at my side to help in every way.”

Although their entire married life involved Church leadership, she recalled her surprise to hear that her husband had been called to the Quorum of the Twelve Apostles.

“He came home one evening and said, ‘I want you to go for a drive with me,’” she told the Church News.

“I was surprised and humbled. That was a most significant call and an overwhelming responsibility, but it has been very rewarding. Our lives have been enriched.”
—Frances J. Monson, on her husband's call to the Quorum of the Twelve Apostles

“I couldn’t imagine why, all of a sudden, he would want to go out for a drive,” she said. “We took our youngest son, who was three. We drove to the This Is the Place Monument, where he parked the car. We got out and walked around the monument, reading the inscriptions dedicated to the pioneers.

“He then told me that President David O. McKay had called him that day to be a member of the Quorum of the Twelve.

“I was surprised and humbled,” Sister Monson said. “That was a most significant call and an overwhelming responsibility, but it has been very rewarding. Our lives have been enriched.”

She and President Monson were both awarded honorary doctorate degrees from Utah Valley University in 2009 for their years of service to the Church and the community.

— Story by Joseph Walker; Tom Hatch contributed to this article 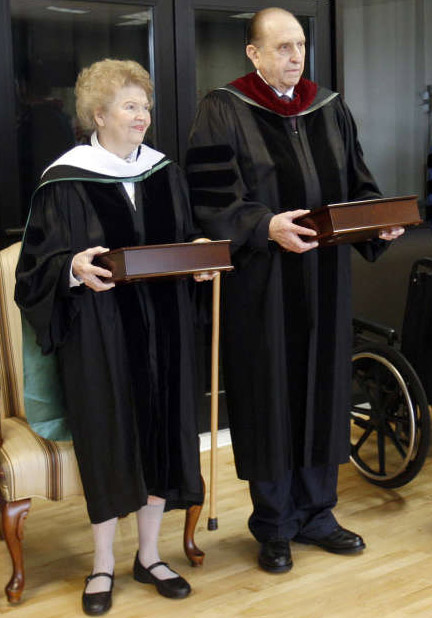 Frances and President Monson were both awarded honorary doctorate degrees from Utah Valley University in 2009 for their years of service to the Church and the community.

Read more about the life of Frances J. Monson.

Read more about the Monsons’ devotion to each other.