President Thomas S. Monson and his wife, Sister Frances J. Monson, were married on October 7, 1948, in the Salt Lake Temple. The following quotes about their courtship, marriage, and relationship of more than 64 years reveal some helpful tips for all couples. 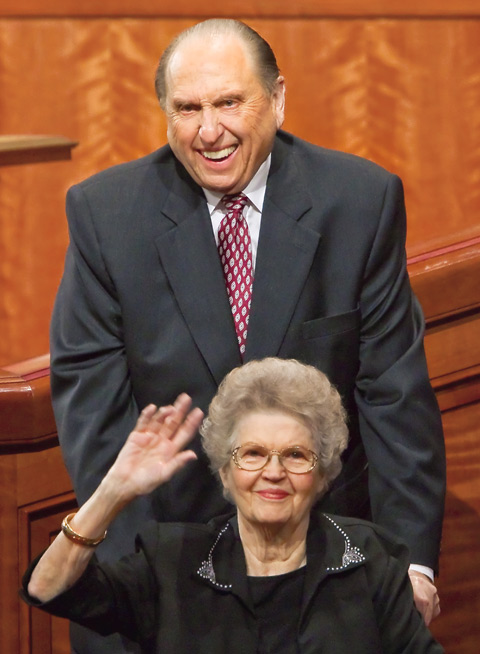 "I Knew I’d Found the Right One"

“The first day I saw Frances, I knew I’d found the right one. The Lord brought us together later, and I asked her to go out with me. I went to her home to call on her. She introduced me, and her father said, ‘Monson’—that’s a Swedish name, isn’t it?’

“Then he went into another room and brought out a picture of two missionaries with their top hats and their copies of the Book of Mormon.

“‘Are you related to this Monson,’ he said, ‘Elias Monson?’

“I said, ‘Yes, he’s my grandfather’s brother. He too was a missionary in Sweden.’

“Her father wept. He wept easily. He said, ‘He and his companion were the missionaries who taught the gospel to my mother and my father and all of my brothers and sisters and to me.’ He kissed me on the cheek. And then her mother cried, and she kissed me on the other cheek. And then I looked around for Frances. She said, ‘I’ll go get my coat’” (“Abundantly Blessed,” April 2008 general conference). 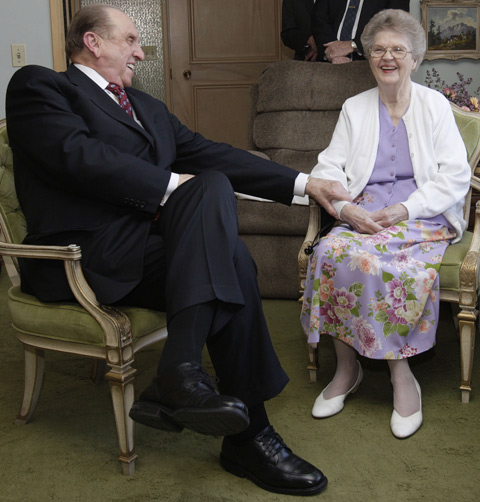 President Monson and his wife, Frances, share a laugh during a visit to the home of 100-year-old Thelma Fetzer on April 9, 2010, in Salt Lake City, Utah. Photo by Jeffrey D. Allred, Deseret News.

“‘It has never been a sacrifice to see my husband doing the Lord's work,’ Sister Monson says. ‘It has blessed me, and it has blessed our children. He always knew that if it was for the Church, I expected him to do what he had to do.’

“President Monson said his wife’s support has been essential in his ministry. ‘I have never known Frances to complain once of my Church responsibilities,’ he says. ‘I have been gone many days and many nights, and I have rarely been able to sit with her in the congregation. But there is no one like her—absolutely no one. She is in every way supportive and is a woman of quiet and profoundly powerful faith’” (“President Thomas S. Monson: In the Footsteps of the Master,” Liahona, June 2008).

“My sweet Frances had a terrible fall a few years ago. She went to the hospital. She lay in a coma for about 18 days. I sat by her side. She never moved a muscle. The children cried, the grandchildren cried, and I wept. Not a movement.

“And then one day, she opened her eyes. I set a speed record in getting to her side. I gave her a kiss and a hug, and I said, ‘You’re back. I love you.’ And she said, ‘I love you, too, Tom, but we’re in serious trouble.’ I thought, What do you know about trouble, Frances? She said, ‘I forgot to mail in our fourth-quarter income tax payment.’

“I said to her, ‘Frances, if you had said that before you extended a kiss to me and told me you love me, I might have left you here’” (“Abundantly Blessed,” April 2008 general conference).

“I thank my Father in Heaven for my sweet companion, Frances. … I could not have asked for a more loyal, loving, and understanding companion” (“Looking Back and Moving Forward,” April 2008 general conference).

“Brethren, let’s treat our wives with dignity and with respect. They’re our eternal companions. Sisters, honor your husbands. They need to hear a good word. They need a friendly smile. They need a warm expression of true love” (“Abundantly Blessed,” April 2008 general conference). 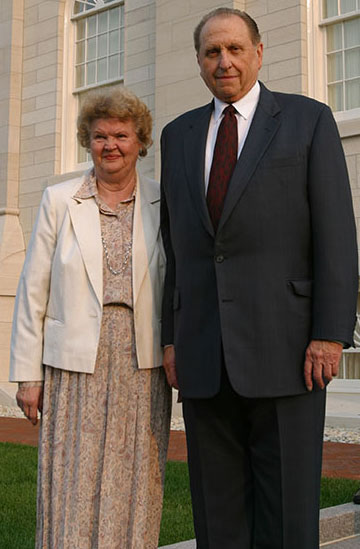 President Thomas S. Monson with his wife, Frances, in front of the Nauvoo Illinois Temple at the time of the dedication, June 27, 2002. Photo by Craig W. Dimond.

Hear couples of all ages share ways they show love to their spouses.