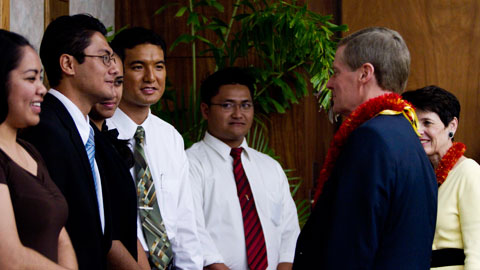 During a recent assignment in the Pacific basin, Elder David A. Bednar of the Quorum of the Twelve Apostles met with missionaries and members in Tonga, New Zealand, Hawaii, and the Marshall Islands. He commended them for their faithfulness and continuing service to the Church.

“We want . . . to see Elder Bednar,” said Eveoone Tiokia, who arrived nearly an hour ahead of time to listen to Elder Bednar’s words. “We want to hear the words of an apostle. His visit is an answer to our prayers.”

As a stop on his way to other destinations, Elder Bednar spoke to students and faculty at BYU-Hawaii devotional. He discussed the connection between personal testimony and ongoing conversion.

“A testimony is both important and necessary, but it is not sufficient to provide the spiritual strength and protection we need,” Elder Bednar said. “Conversion is deepening devotion to and consistent application of the knowledge we have received.”

For members in the Republic of the Marshall Islands, Elder Bednar’s visit was an especially important event, as it was the first time a member of the Quorum of the Twelve Apostles had ever visited the islands. Read more about his visit in the Marshall Islands.

"Many of these brothers and sisters are first-generation members of the Church,” Elder Bednar said. “[They] have a simple abiding faith in the Savior. They are not diverted by things that do not matter. They are generous and loving. We have much to learn from these modern-day pioneers who live and serve in areas where the Church is beginning to be established."

"As we travel to the isles of the sea and the uttermost parts of the earth, we see the Church is everywhere," Elder Bednar said. "It is firmly established, it is growing, and there are faithful, good people. It is truly miraculous." 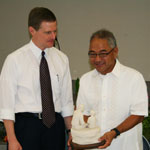 General Authorities of the Church often fulfill assignments throughout the world to strengthen and encourage Church members, organize or reorganize stakes and districts, and to conduct the business of the Church (see Matthew 24:14, D&C 84:62, 114:1). Accompanying Elder Bednar was his wife, Sister Susan Bednar; also joining him for part or all of his travels were Elder Claudio R.M. Costa of the Presidency of the Seventy, Bishop Richard C. Edgley of the Presiding Bishopric, Elder Tad R. Callister of the Seventy and President of the Pacific Area, and Elder James J. Hamula of the Seventy and First Counselor in the Pacific Area Presidency.

Local Public Affairs offices contributed to this report, and some of the material in this report is taken from an article published by the Church News. Read the article.